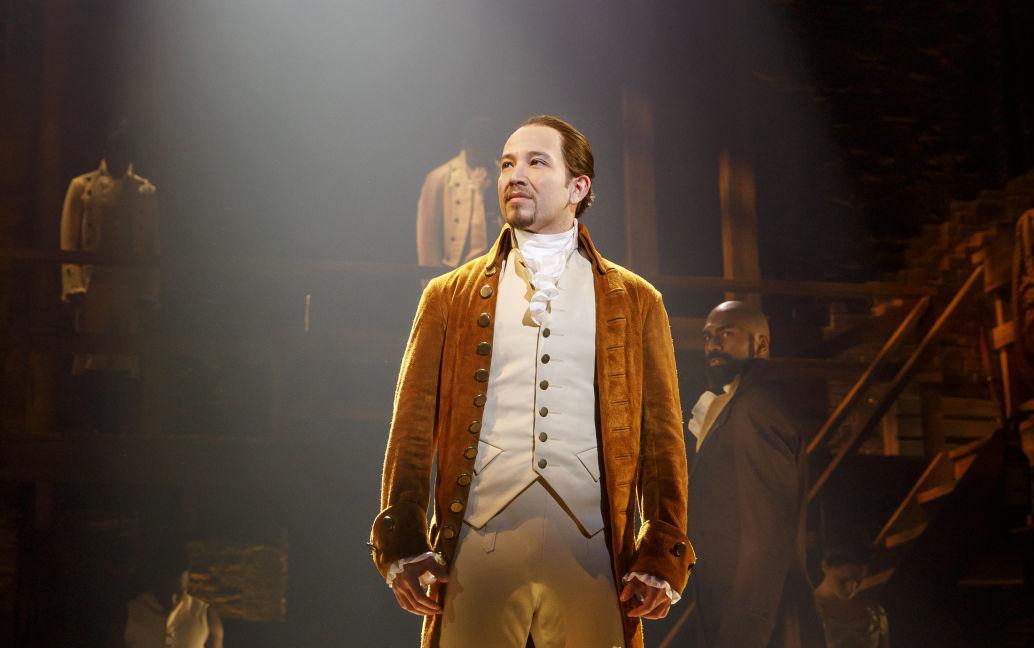 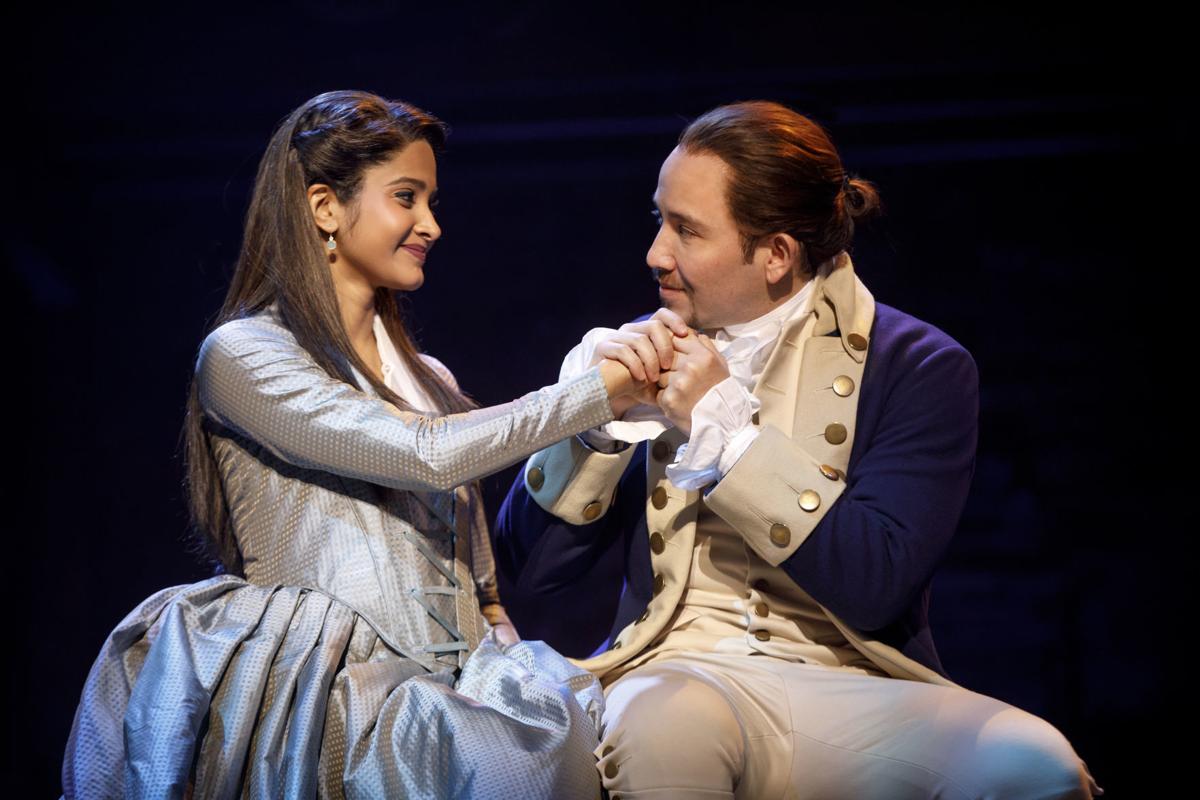 Joseph Morales and Shoba Narayan as Alexander and Eliza Hamilton, respectively. Morales does a fine job giving his character multiple dimensions: arrogance, sometimes endearing cockiness and some disappointing flaws, among many others.

While others were breathlessly awaiting “Hamilton,” I was blasé. Maybe even a little smug.

I scoffed at the hype. What is a hip-hop musical, anyway, and would I even understand the words? And what does it have to feed my traditional, Rodgers and Hammerstein heart?

People are like sheep, I concluded. They like “Hamilton” merely because it’s the cool thing to do. I steadfastly remained immune to the madness.

You know where this is going, right?

After Wednesday night at the Orpheum Theater, I succumbed to “Hamilton” fever. About three songs in, I turned and whispered to my friend: “Lin-Manuel Miranda is a freaking genius.”

Miranda wrote the book, music and lyrics for this retelling of America’s birth with immigrant Alexander Hamilton at its center. He was a confidante of Gen. George Washington (later the first prez, of course), a key player in the fight for independence from England, the first Secretary of the Treasury who crafted the fledgling country’s economic system and a multi-layered, ego-driven and not always admirable human being.

But though the musical carries his name, it’s as much about the other Founding Fathers and the rocky path to ratification of the U.S. Constitution, a document that’s been threatened before and that some say is being threatened once again.

You leave the theater with a better understanding of why our system is so special and why it’s worth fighting for. Who knew that a story long relegated to dusty (and boring) history books could achieve that with staccato hip-hop lyrics and dance moves, other musical genres such as R&B, classic Broadway showtunes and British honky-tonk, some off-beat humor and nontraditional casting. (Yes, I know. You discovered that while I was being stubborn and smug.)

Every kid should see “Hamilton.” It sucks you into history like “Star Wars” takes you into space. It’s so engaging that you want to tell others: I spent about 20 minutes eagerly relating the plot to my husband the minute I got home. From history classes, I knew vaguely who Hamilton was, but I didn’t know (or remember) many interesting tidbits such as his founding of the New York Post and his involvement in perhaps the first sex scandal in American politics.

I also didn’t know the back story of the relationship between Hamilton and Burr, a complicated tale that ends in the famous duel. They were frenemies before it was a thing.

There’s not a weak link in the cast, and the show takes advantage of that by using nearly 90 percent of the ensemble most of the time, sending a message that’s in line with the show’s focus on the Founding Fathers’ desire to build a country in which everyone is equal. That’s even more apparent at the curtain call, when no actor takes an individual bow. And Miranda was right: casting actors of color as Hamilton, Burr and their compatriots gives a familiar story a fresh and welcome angle.

» Erin Clemons as Eliza, Hamilton’s wife, who gets many of the most dramatic scenes when she discovers her husband’s infidelity and endures her son’s death. Both Clemons and Ta’Rea Campbell, who plays her sister Angelica, are vocal juggernauts, as are Marcus Choi as Washington and Pierre Jean Gonzalez as Burr (He gets the best song, “The Room Where it Happens.”)

» Joseph Morales as Hamilton, who does a fine job giving his character multiple dimensions: arrogance, sometimes endearing cockiness and some disappointing flaws, among many others. He doesn’t have the strongest voice or presence onstage, but he holds his own.

» Warren Egypt Franklin and Neil Haskell, who provide much of the show’s humor as Thomas Jefferson and King George, respectively.

I usually don’t mention sound in touring Broadway shows unless it’s substandard, but this sound was the polar opposite of that, and it deserves praise. Lightning fast lyrics were easily heard and understood (thanks also to the actors) and Miranda’s exquisite music rocked the house. The small orchestra also was awesome.

I have to admit I was so bowled over by the totality of the show’s technical and performing excellence that I didn’t give much thought to dissecting its nod to slavery (kind of an elephant in the room), which probably wasn’t emphasized enough.

I’ve also read reviews criticizing the script’s depiction of the women as weak accessories to the men, but I didn’t find that to be true. They certainly got their share of the best songs, such as “That Would Be Enough” or “It’s Quiet Uptown” a stunning song about the impact of death on parents.

Not surprisingly, the show was a sellout and the crowd was respectfully raucous and extremely appreciative. If this is any indication, this cast will get lots of love over the next couple of weeks.

Count me among the smitten. I admit — wait for it — that I couldn’t have been more wrong about “Hamilton.”

How to enter the lottery for $10 'Hamilton' tickets

Tickets for each “Hamilton” performance will be available through a digital lottery.

Fall Arts Preview: All the music, art, theater, movies and more coming to Omaha this year

Don’t say there’s nothing to do in Omaha. It’s simply not true. In this year’s Fall Arts Preview, we compiled it all: Country singers, Broadway plays, comedians, operas, artwork and lots, lots, lots more.

Mayim Bialik's Omaha speech, she said, "was a very special one," her first ever at an organization like Community Alliance. She said she wished she had found such an agency when she was first struggling with her mental health.

Onstage combat must be planned move by move to look authentic while keeping actors safe.

V. Mertz will serve a menu inspired by 'Hamilton' during the run of the musical

"Dinner at Mr. Jefferson's" will be available at V. Mertz through Sept. 28. The meal is inspired by a famous dinner eaten by Alexander Hamilton, Thomas Jefferson and James Madison.

Review: Introduce your kids to theater with 'Annie' at the Playhouse; it has a lot for you, too

The production, with a cast of all ages, has enough cute to go around.

Editorial: Alexander Hamilton made invaluable contributions to our constitutional system

During Constitution Week, it's appropriate to salute his legacy as a key founder of our country.

The best (and worst) movies adapted from TV shows

To celebrate the release of “Downton Abbey,” we took a look at some of the best and worst TV shows to make the jump to the big screen, as well as a few upcoming adaptations.

"Hamilton" is still going strong at the Orpheum Theater, here in Omaha through Sept. 29. Improv comedy "The Weisenheimers" opens Saturday, and "The Cat in the Hat" is among more shows up next on the docket.

'Hamilton' isn't just a musical to this mom and daughter. It's so much more.

"'Hamilton' is something we can enjoy together, complete with little inside jokes — like when she goes to the neighbor’s house and I tell her 'you’ll be back' by dinnertime. Or that she should 'meet me inside.'"

Preview: Director says 'Cat in the Hat,' coming to the Rose this weekend, 'is a story about resilience'

Generations of kids have embraced the crazy world of “The Cat in the Hat.” It's the perfect material for a fast-moving play, especially for younger children, and is coming to the Rose Theater this weekend.

Preview: Brigit St. Brigit will be first in region to produce Broadway's 'Bernhardt/Hamlet'

“Bernhardt/Hamlet” just completed its premiere run on Broadway in November 2018. Now it’s set to open at the Brigit St. Brigit Theatre in Omaha on Friday. It’s fairly rare that a theater in the Midwest gets the rights to a New York play so quickly. BSB is the first in the region to produce it.

"Red Summer," "The Cat in the Hat" and more are among upcoming theater offerings in the metro area.

First Broadway, then Omaha? Brigit Saint Brigit produces play less than a year after it closed in NYC

It's very rare. The Omaha theater's 'Bernhardt/Hamlet' is a regional premiere, and the only other theaters that have it are large regional operations.

Review: The Rose Theater's 'Cat in the Hat' is all that

If you've been wondering whether your kids should see "The Cat in the Hat" at the Rose, wonder no more. It's good.

The Bellevue Little Theatre plans to launch its 2020-21 season this fall, and auditions are in July for the first two shows.

Joseph Morales and Shoba Narayan as Alexander and Eliza Hamilton, respectively. Morales does a fine job giving his character multiple dimensions: arrogance, sometimes endearing cockiness and some disappointing flaws, among many others. 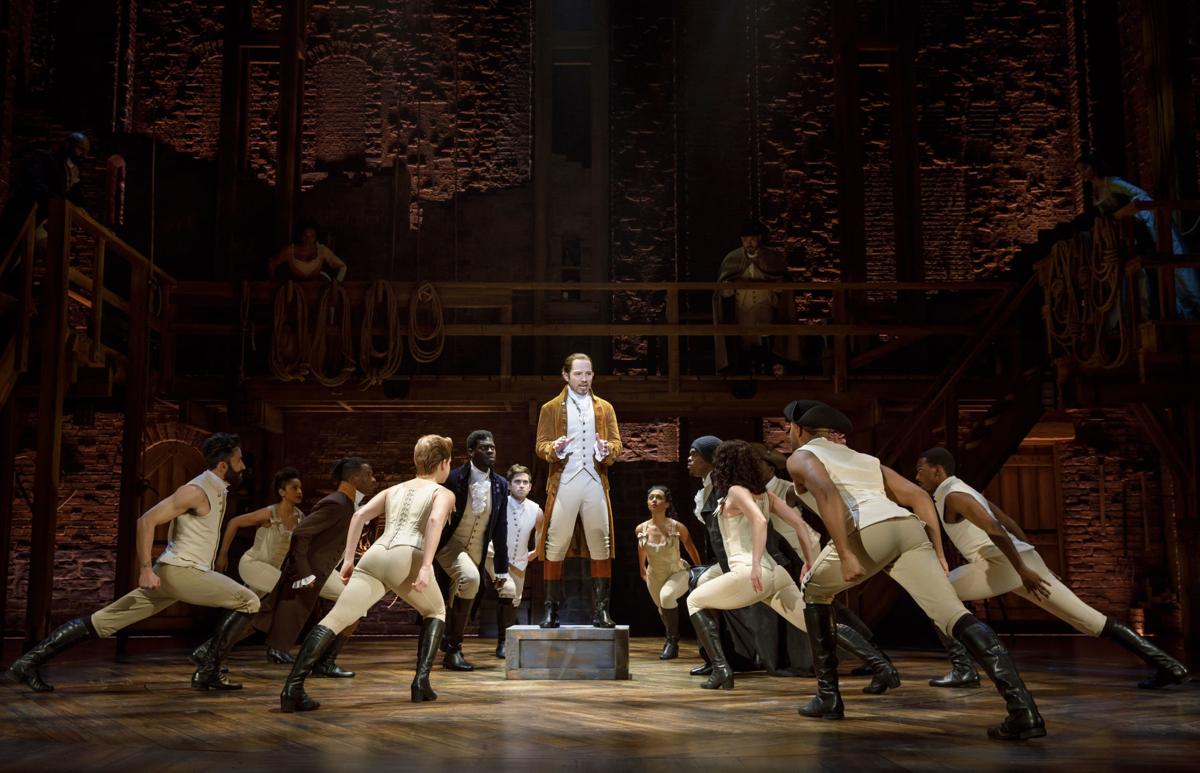 During the opening moments of “Hamilton,” Joseph Morales, who plays Alexander Hamilton, is surrounded by much of the cast.