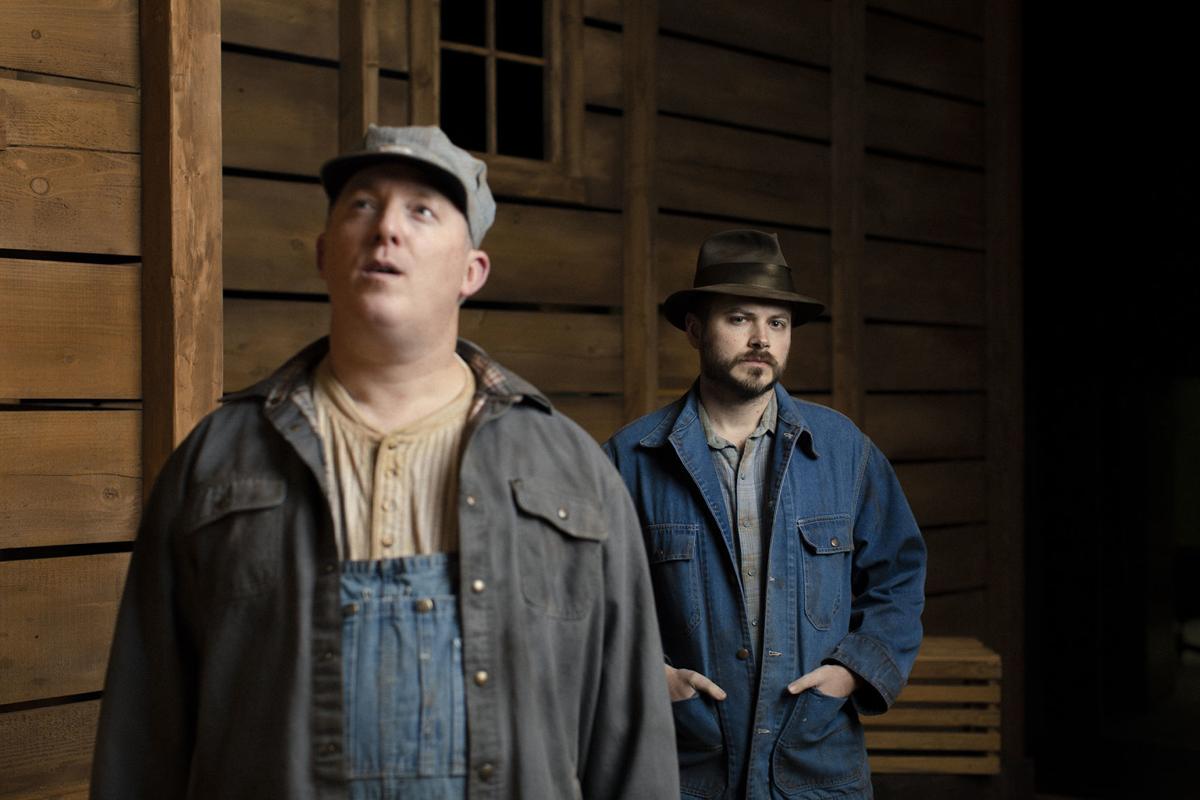 Tony Schik, left, stars as Lennie and Josh Peyton as George in “Of Mice and Men” at the Omaha Community Playhouse. 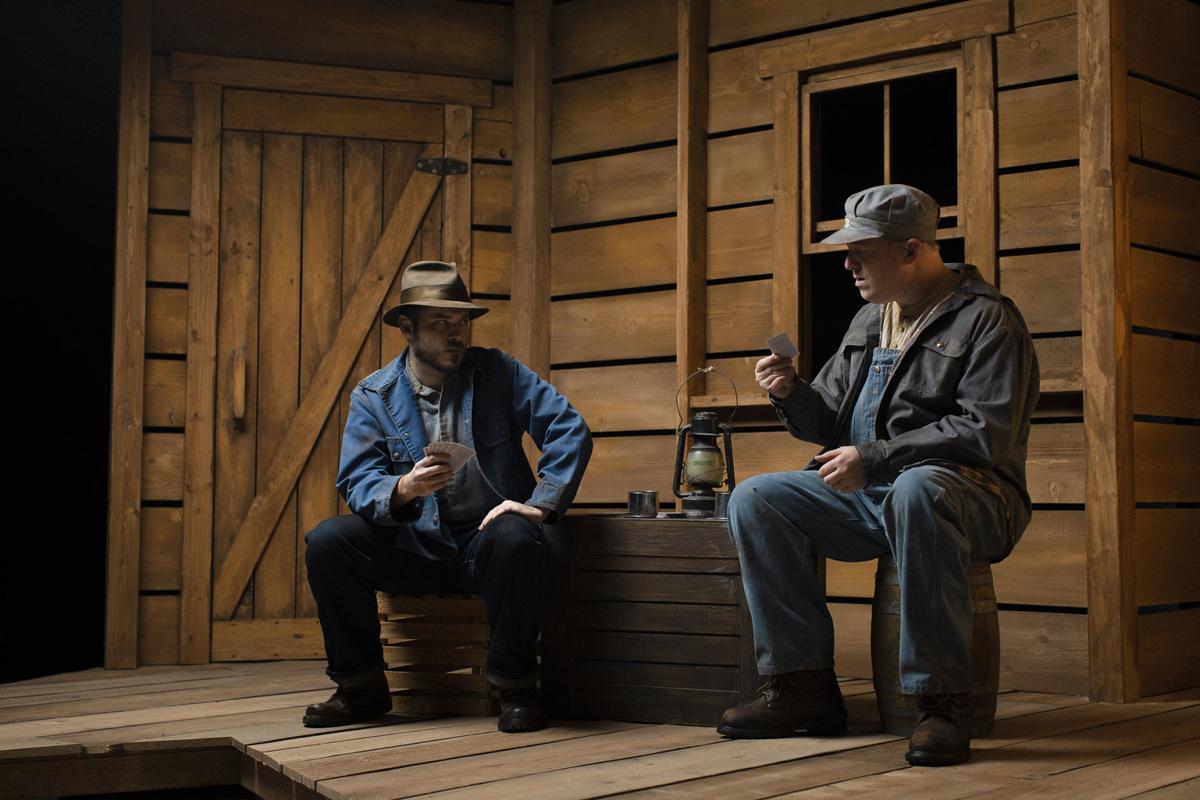 Josh Peyton, left, as George and Tony Schik as Lennie anchor a stellar cast in “Of Mice and Men” at the Omaha Community Playhouse. 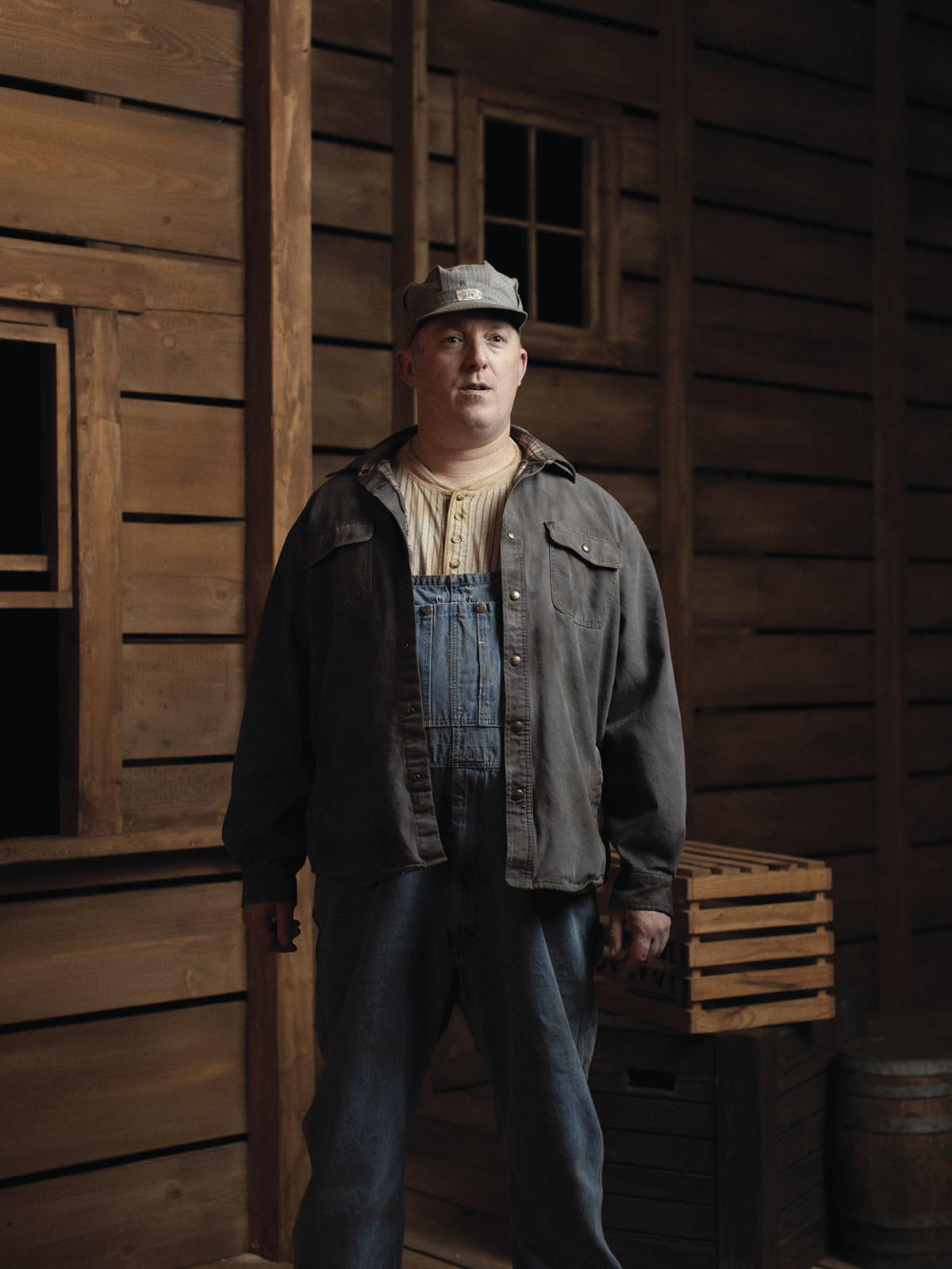 Tony Schik in “Of Mice and Men” at the Omaha Community Playhouse.

The reaction to “Of Mice and Men” on Thursday at the Omaha Community Playhouse was almost as interesting as the play itself.

It’s a faithful version of John Steinbeck’s legendary novella, adapted by Steinbeck himself. The story and the characters are familiar: George and Lennie, migrant farm workers, traveling companions and friends, bounce from place to place in California during the Depression. George is savvy, edgy, uneducated and devoted to his friend, who is childlike, physically strong and mentally challenged.

It’s a serious story, though the script includes humorous turns: Lennie’s strength gets in the way of his innocent desire to show love. That causes problems and, ultimately, tragedy for both men, especially when the flirtatious wife of the rancher’s son lurks around the bunkhouse on the ranch where they find employment.

I came away from the preview performance with several impressions, both about the show and the atmosphere:

1. Director Ablan Roblin put together a fine cast of actors who understand, love and respect the story and its themes of relationship, loyalty, longing, hopelessness and hope, among others.

As George, Josh Peyton does well in a layered role: He’s exasperated with Lennie, yet obviously loves him. Tony Schik, the drama teacher at Beveridge Magnet Middle School, masterfully conveys Lennie’s pathologies, often with a nervous laugh that’s meant to illustrate his struggle to understand the world.

Those two, obviously, are the heart of the show, but the entire cast deserves mention: Nick Zadina as Slim, a ranch hand and peacemaker; Mallory Vallier as the conniving wife; Dennis Collins as an old ranch worker; and Donté Plunkett, Michael Leaman, Steve Catron, Don Keelan-White and Benjamin Battafarano.

2. Physically, the space is ideal for the 11-member cast, including a fairly large dog.

With just a wooden platform, a wall with windows, some bunk beds, hay bales, a table and other props, it creates several scenes that make you imagine a sprawling ranch and its surrounding countryside. Subtle light changes indicate day and night, even though you can’t see sky. Scenic and lighting designer Jim Othuse did his usual excellent work.

3. In another way, the space might be a hindrance.

The script had its share of funny lines, but there were misplaced laughs among the crowd, sometimes when Lennie was laughing inappropriately. They seemed to be contagious in certain parts of the theater.

I wasn’t sure what to make of it, because to me, the moments of gravity far outweighed the humor. It was tempting to over-analyze the reactions to Lennie and the story as an indication of our increasing lack of compassion as a society, but it probably was just how people in the crowd were relating in close quarters on an isolated night.

I’m loath to draw the conclusion that 2019 audiences can’t relate to this universal story because we’ve all become disconnected, jaded and tribal, though I considered that possibility. No matter what, this was grist for a great conversation with the spouse. And the vibe at subsequent performances might be quite different.

4. “Of Mice and Men” isn’t a musical, but it had fabulous music that was evocative of the period.

Timothy Vallier, who has both acted (as the Beast in “Beauty and the Beast”) and composed (“Ripcord”) for the Playhouse, provided the gorgeous melodies heard during scene changes and as background music.

5. A confession: I managed to miss this book in school and was only vaguely familiar with the story.

Perhaps that’s why my reaction to the material was somewhat different than others in the theater. I found little to laugh about as the story unfolded, managing only smiles when the script included comical lines, because I found the overall story so overwhelming.

I felt Lennie’s confusion; George’s frustration over Lennie’s condition and the fact that he couldn’t change it; the wife’s boredom and lack of connection with her husband; the bitterness of the ranch’s black employee, who’s not allowed to sleep in the bunkhouse; and the shock of the show’s conclusion — all a testament to the skill, hard work and dedication of Roblin and his cast.

This play may be old, but in their hands, it’s far from obsolete.

OF MICE AND MEN

'Of Mice and Men' comes to Playhouse stage

After John Steinbeck wrote his brilliant novel, “Of Mice and Men,” he adapted it for the stage in time for it to hit Broadway while the book w…

Review: Omaha theater's version of 'Virginia Woolf' is not for the faint of heart

Performing Artists Repertory Theatre's production is raw and honest. If you're used to rainbows and bluebirds, it will rattle you.

The Heisman Trophy-winning quarterback is joined on the album by actor John Beasley, former Sen. Ben Nelson and the Maynard Triplets, among others.

With "The Hobbit," the Circle Theatre fulfills a new mission statement that gives people with disabilities a chance to create high-quality art.

The 2019-20 season also will include a production of "St. John the Baptist" and "The Abduction from the Seraglio."

Singers, actors, dancers and others will perform once a month at the B-Side next door. A fundraiser for renovations is closer to its goal.

Highlights of the 2019-20 Omaha Performing Arts season include two musicals, "The Lion King" and "Les Misérables," and a 40th birthday party for the band Kansas.

As plays get more sexy, intimacy rehearsals become more of a thing at theaters

Local directors for "The Bridges of Madison County" and "Indecent" say the process is essential for insuring that actors feel safe and supported onstage.

The theater will produce an additional musical in its 2019-20 lineup.

Tony Schik, left, stars as Lennie and Josh Peyton as George in “Of Mice and Men” at the Omaha Community Playhouse.

Josh Peyton, left, as George and Tony Schik as Lennie anchor a stellar cast in “Of Mice and Men” at the Omaha Community Playhouse.

Tony Schik in “Of Mice and Men” at the Omaha Community Playhouse.