Ak-Sar-Ben, founded in 1895, has long been an important part of the Omaha community. It was established by a group of men who wanted to keep the State Fair in Omaha. Twelve of the men traveled to New Orleans to purchase floats that had appeared in the Mardi Gras Parade there to start a local parade in Omaha.

The 12 men became the original Board of Governors of the Knights of Ak-Sar-Ben. They also came up with the organization's name: Nebraska spelled backwards.

In 1919, 200 acres was purchased at 63rd and Shirley Streets but it wasn't until after a fire destroyed the Ak-Sar-Ben Den at 22nd and Burdette Streets in 1927 that the site was developed.

Also in 1919, the organization decided to make agriculture its focus. Livestock shows and rodeos drew participants from all over the Midwest. To this day, the 4-H stock show and the rodeo, along with the coronation and scholarship ball, remain key parts of the Omaha tradition -- and still draw large crowds.

Click here for a showcase of more general Ak-Sar-Ben history.

In 1937, on the 10th anniversary of the Ak-Sar-Ben Livestock Show, President Franklin D. Roosevelt sent a telegram to George Brandeis, president of the show.

The Iowa State Fair may have it's butter cow, but in 1936 the Stock Show had a lard Uncle Sam!

Charles Umlauf, a Chicago Art Institute student, completed his unique sculpture for an art exhibit at the Ak-Sar-Ben stock show. When completed, Uncle Sam was watching a donkey and an elephant in a prize ring.

Horses and, in particular, horse training were very popular in the early days of the show. People traveled for miles to show their horses here.

Mrs. Loula Long Combs of Lees Summit, Missouri, was notable at both the show and in society. Our 1936 Sunday Society front page said she "would be dean of American horsewomen -- if such a title were officially given."

The White Horse Patrol -- 27 horsemen and their white horses -- proved to be the star attraction at the 1937 show.

Prizes were given out not only for animals' performance, but also for their surroundings! Mrs. W.D. Campbell of Des Moines is pictured in the tack room of the Shoestring Stables, which was awarded first prize of $25 in 1938. Their tack room also won at the Kansas City show that year. The tack room, set up in box stalls, contained show harnesses and accessories, served as lounging rooms for owners.

In the early days of the livestock show, train carloads of cattle were shipped to the Omaha stockyards to be judged and sold at auction.

This 1936 photo from Union Stock Yards shows some of the stock raisers and breeders who came for the show -- and the sale.

Here's John Gosch, 18, of Ida Grove, Iowa, with the 4-H Grand Champion baby beef in 1938. The calf named Mickey weighed 930 pounds. Like other exhibitors of the time, Gosch wears a white 4-H cap.

Mary Helen Boothe, 18, of Marion County, Iowa, came to the Ak-Sar-Ben 4-H show for the first time in 1938 and showed the champion Angus Steer. The winner was named Duke, a 920-pound steer.

Sheep and hogs also are popular at the show.

Lambs bred from a purebred Southdown ram and crossbred Southdown ewes won first prize in the carlot lamb contest in 1939. They were shown by Aegerter & Carr Brothers of Seward, Nebraska.

4-H education demonstrations and contests have always been part of the Ak-Sar-Ben Stock Show. In 1938, Myron Gustafson, 15, left, and Eugene Gustafson, 16, cousins from Hamilton, Nebraska, won the 4-H meat loss prevention demonstration and went on to represent this area at the International Live Stock Show in Chicago.

Claude Althouse with the Grand Champion Fat Barrel at the 1938 show.

Jesse McIntyre Jr., 17, left, of Farragut, Iowa, took top honors in the 4-H swine contests in 1936. His Hampshire barrows "George" and "Alfred" won the grand championship and the reserve grand championship. At right is his brother Carl, 12, who helped show the pigs.

One of the more novel exhibits at the 1939 Ak-Sar-Ben show was this "bug-a-zoo," a menagerie of animals whose bodies were made entirely of flower seed pods. It won first prize in the garden and nature hobbies division.

The road to Omaha hasn’t always been through the nation’s college baseball parks. 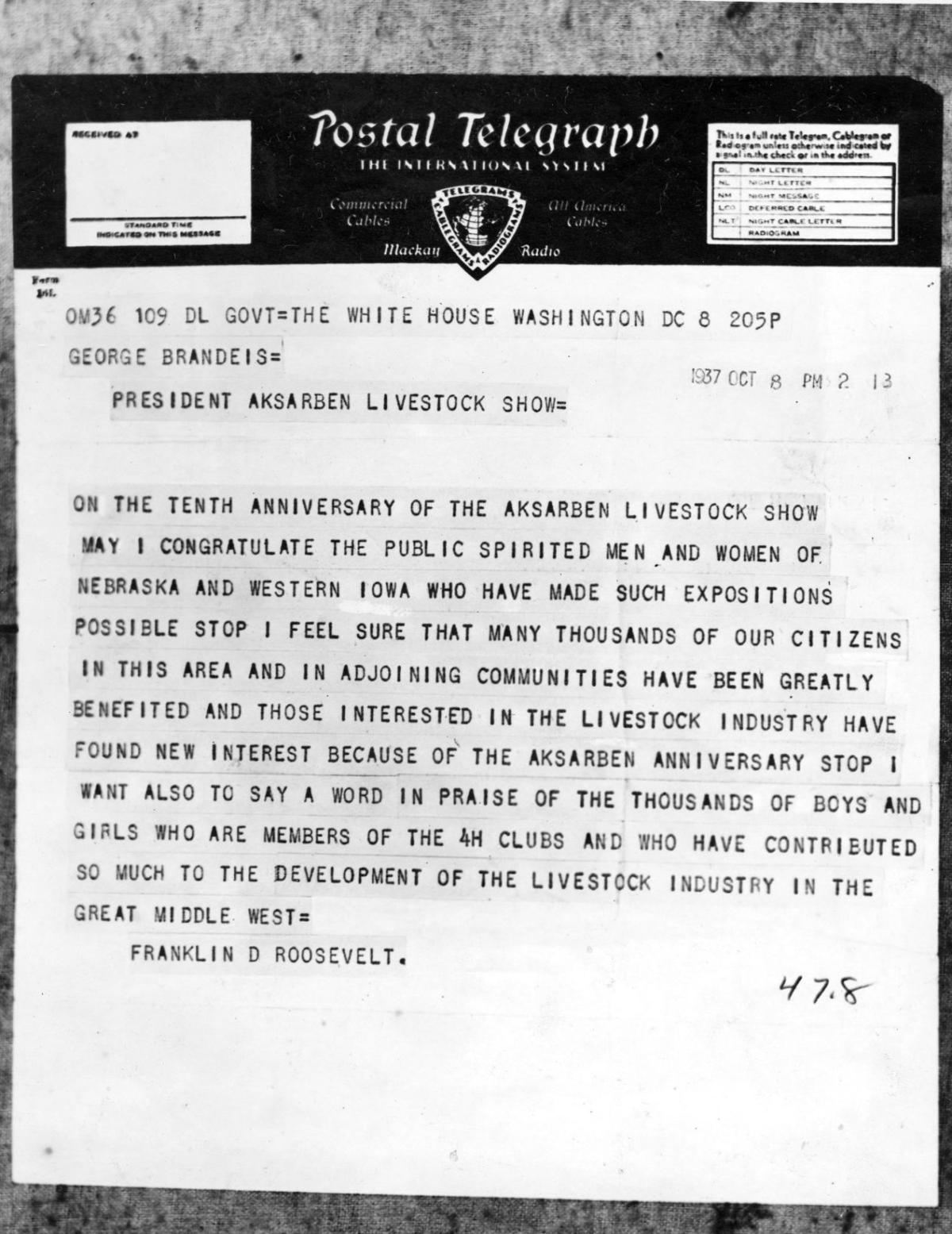 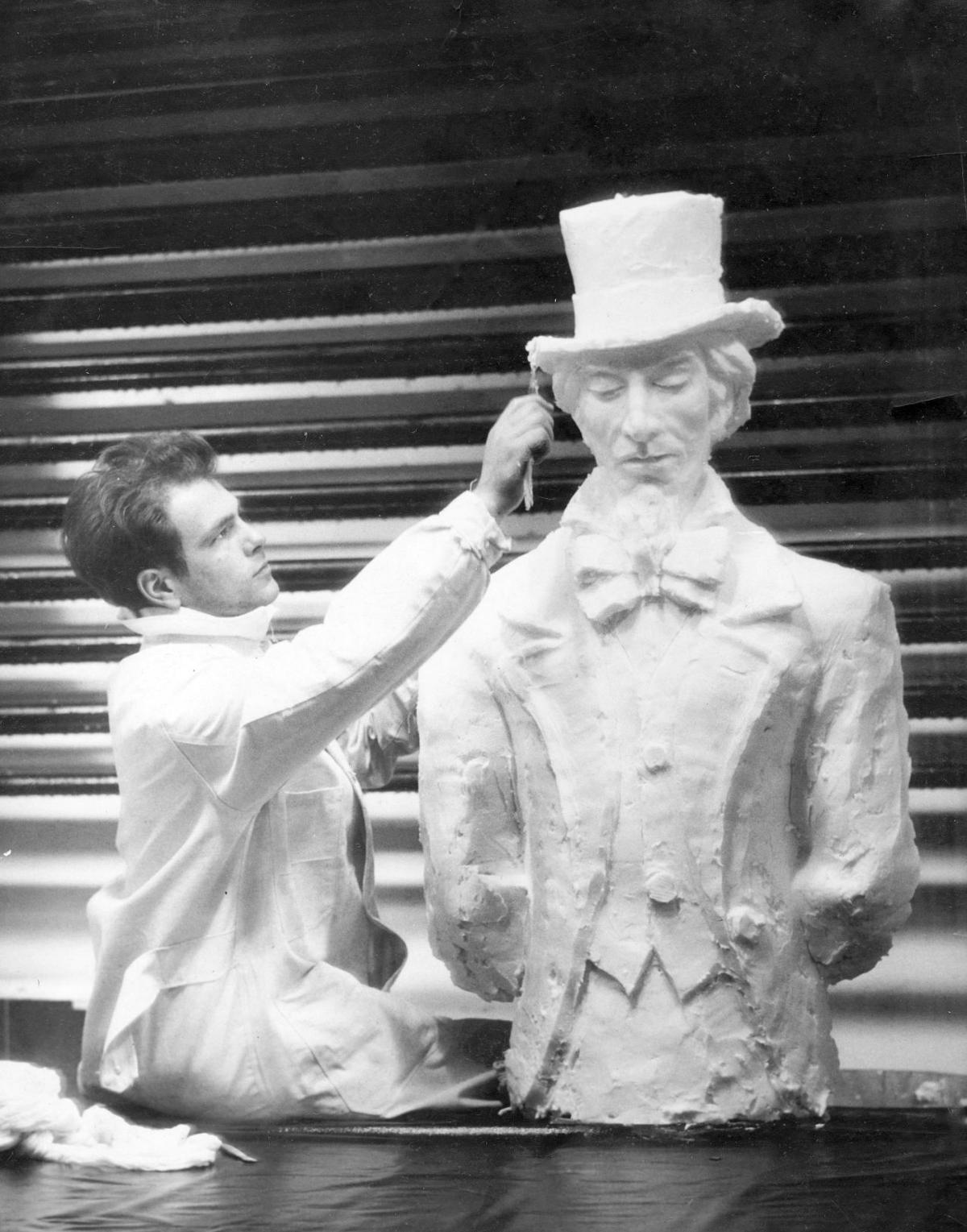 Political arena in lard was the finished product when Charles Umlauf, Chicago art institute student, completed his unique sculpture for an art exhibit at the Ak-Sar-Ben horse and stock show. Uncle Sam was watching a donkey and an elephant in a prize ring. THE WORLD-HERALD 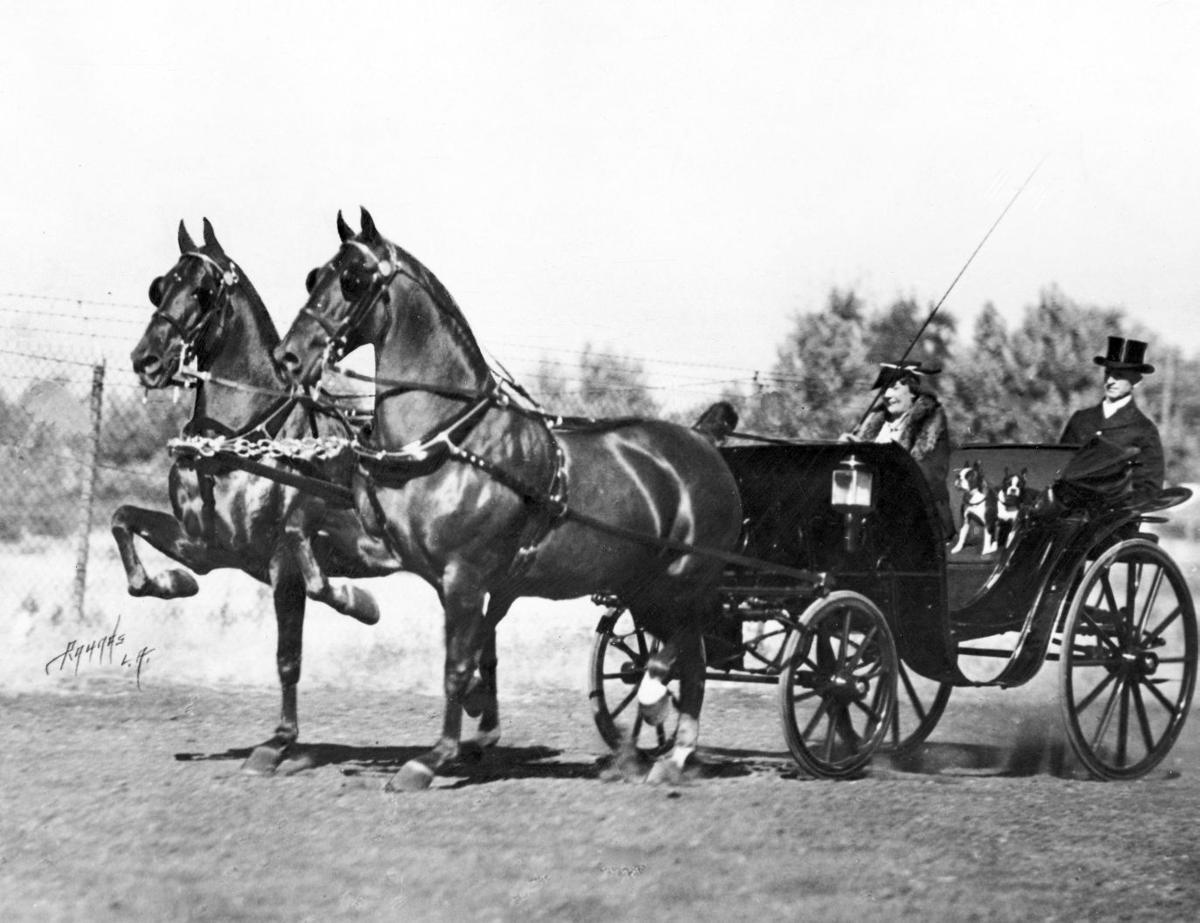 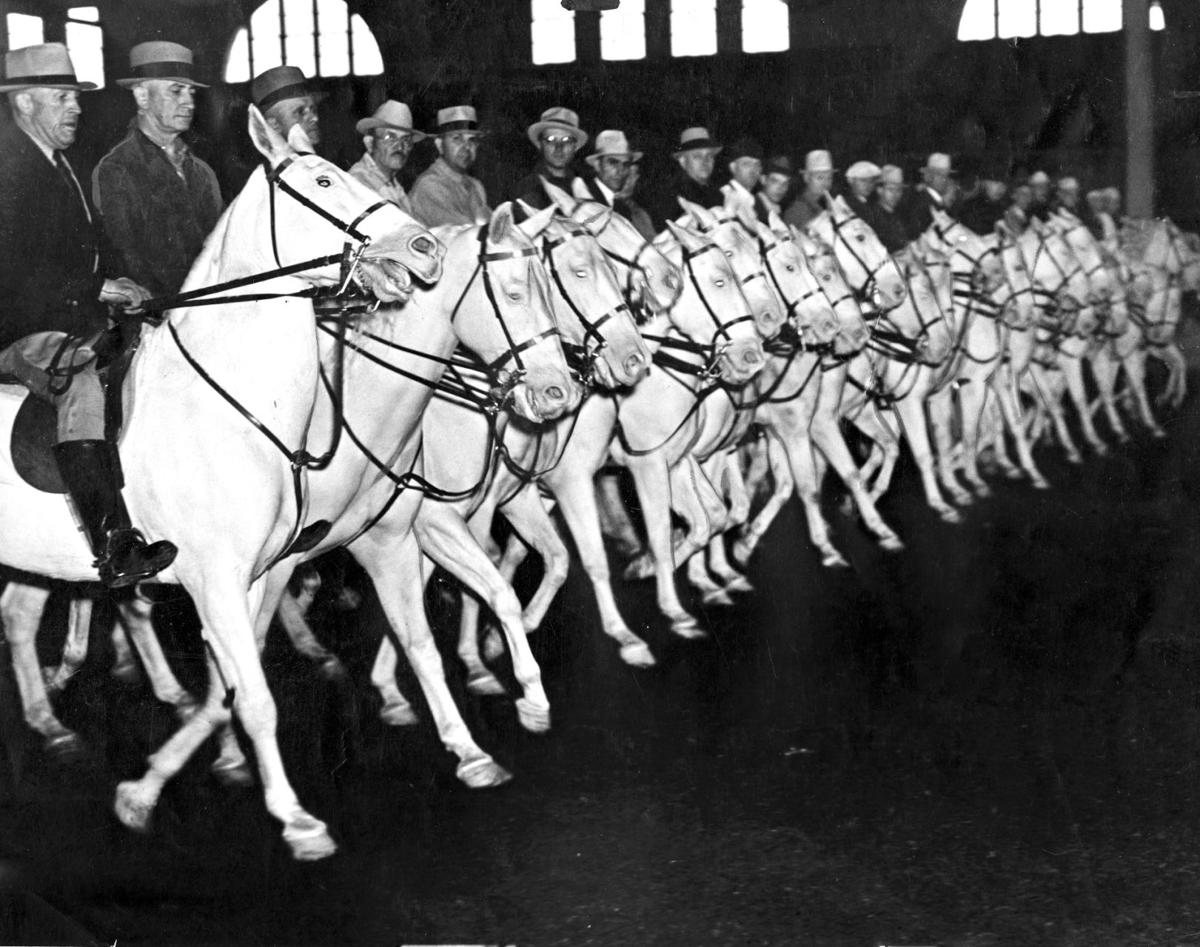 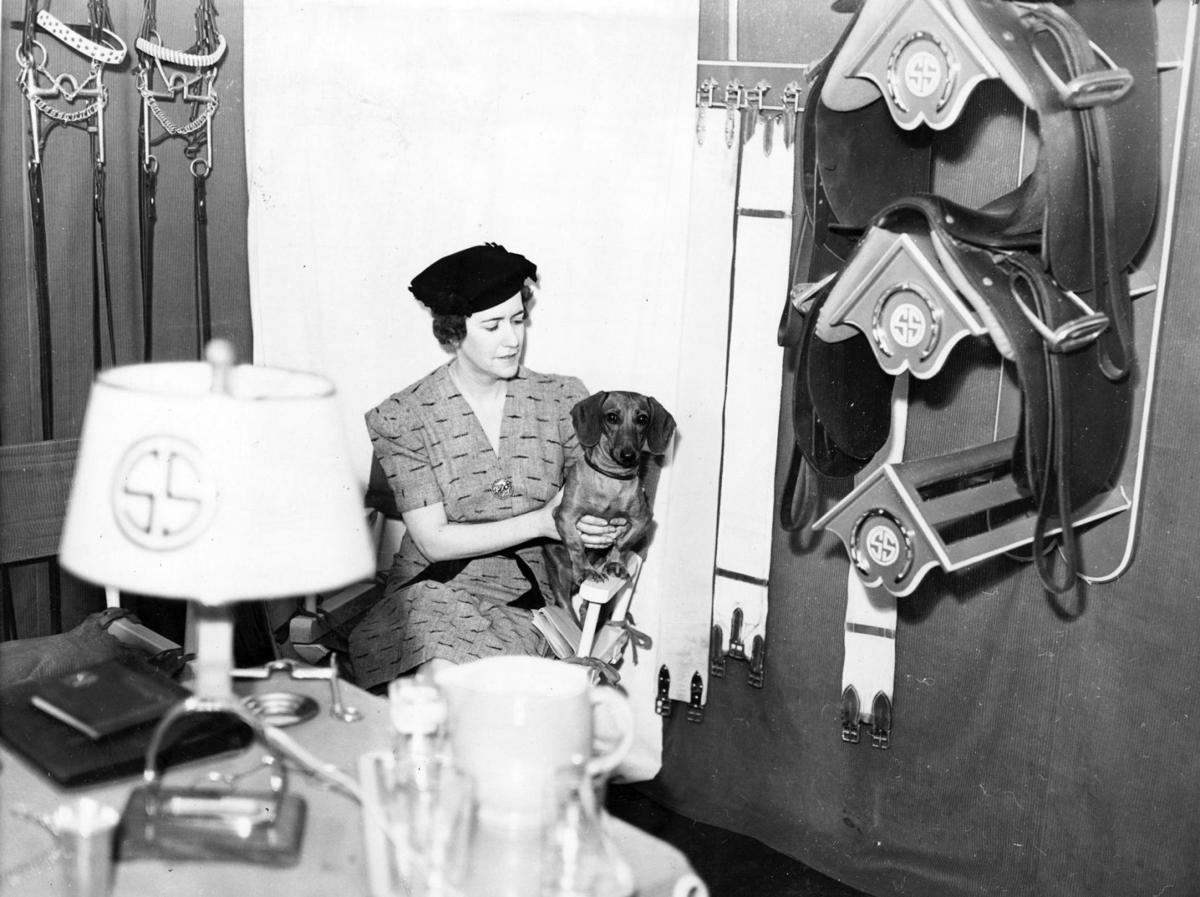 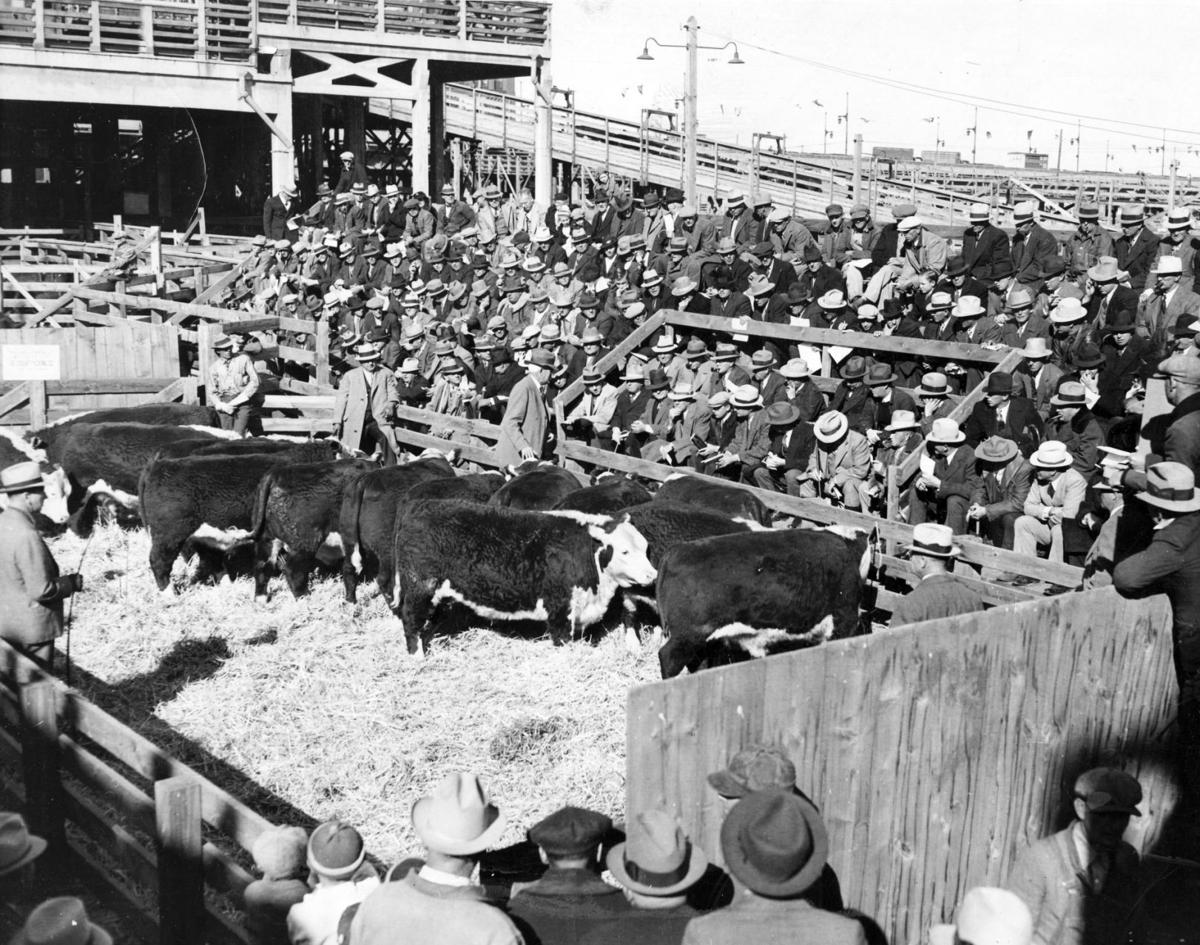 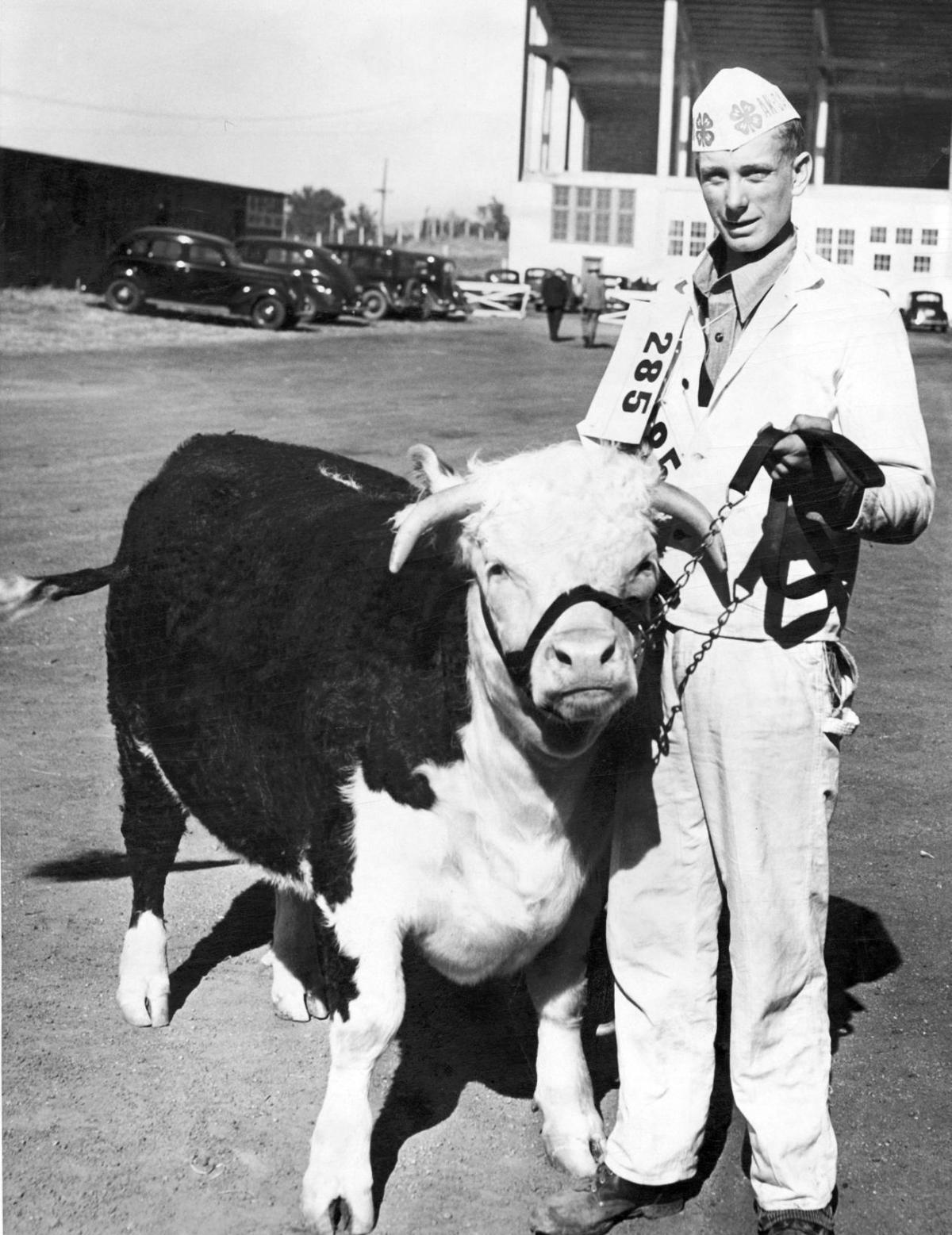 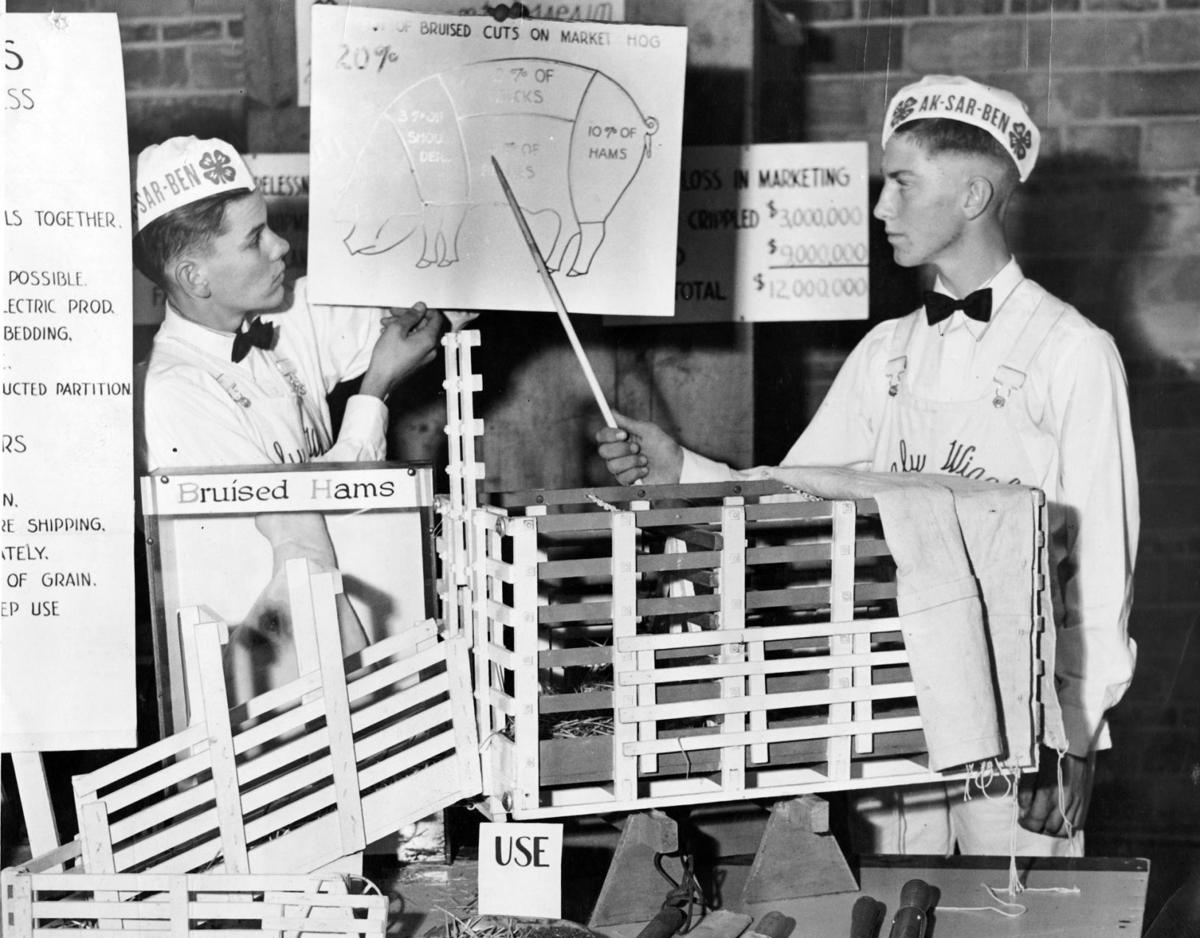 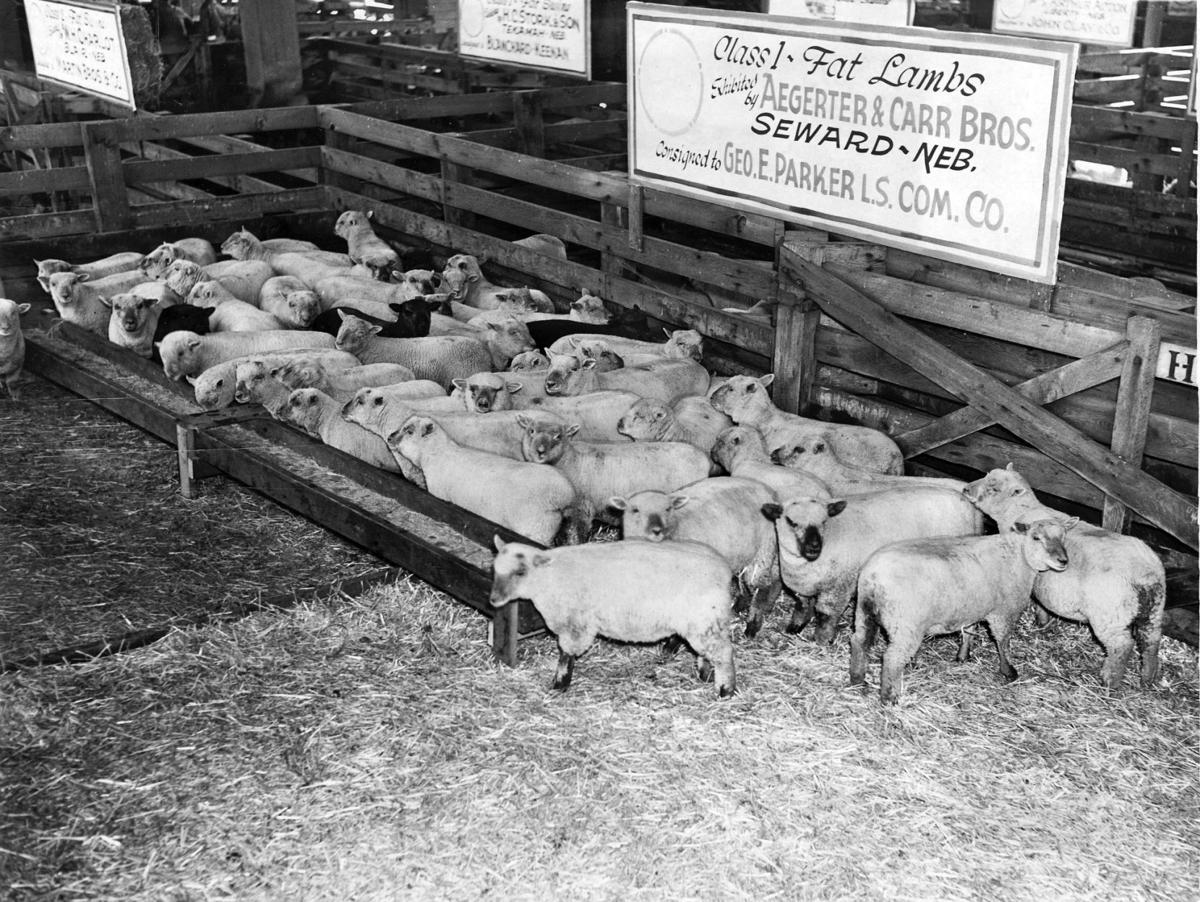 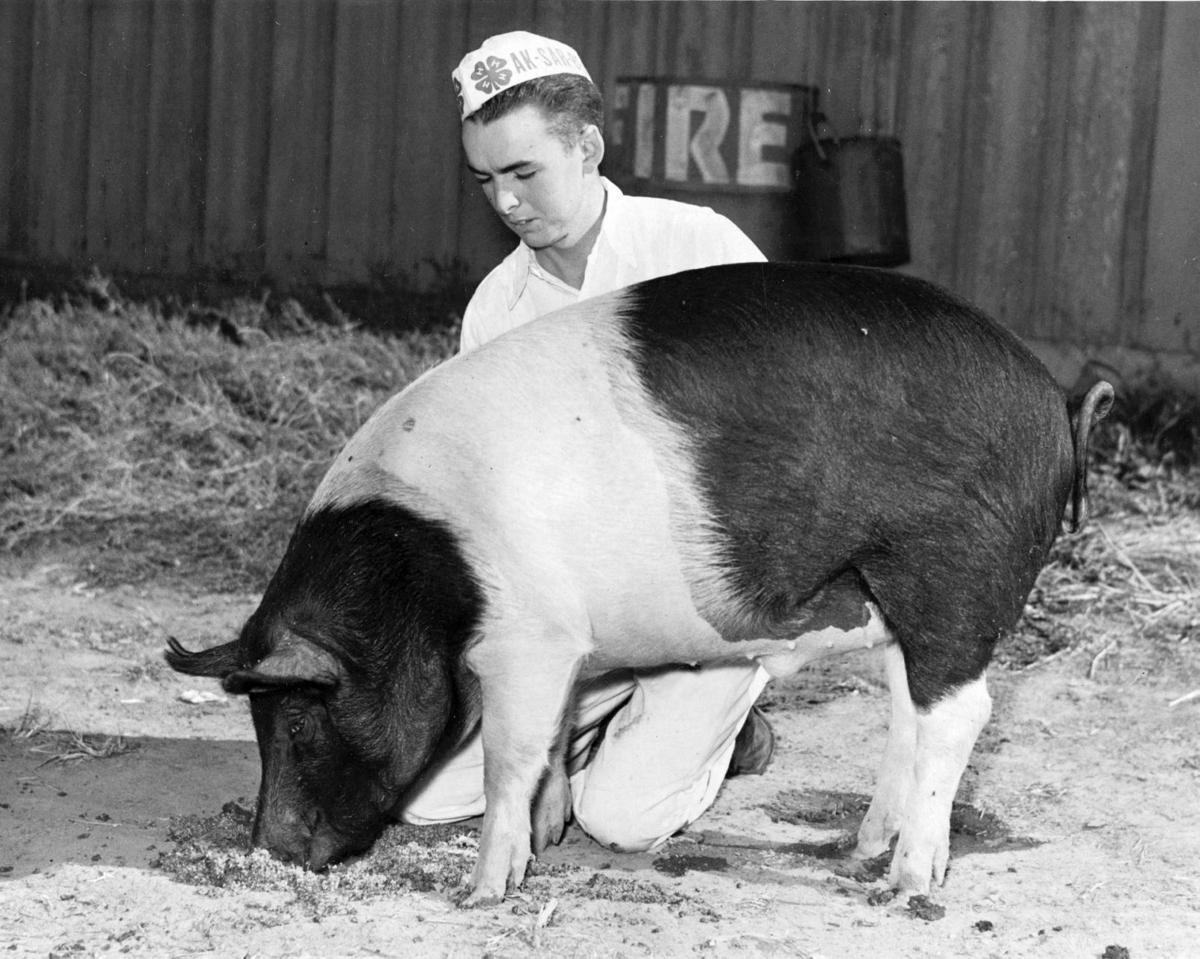 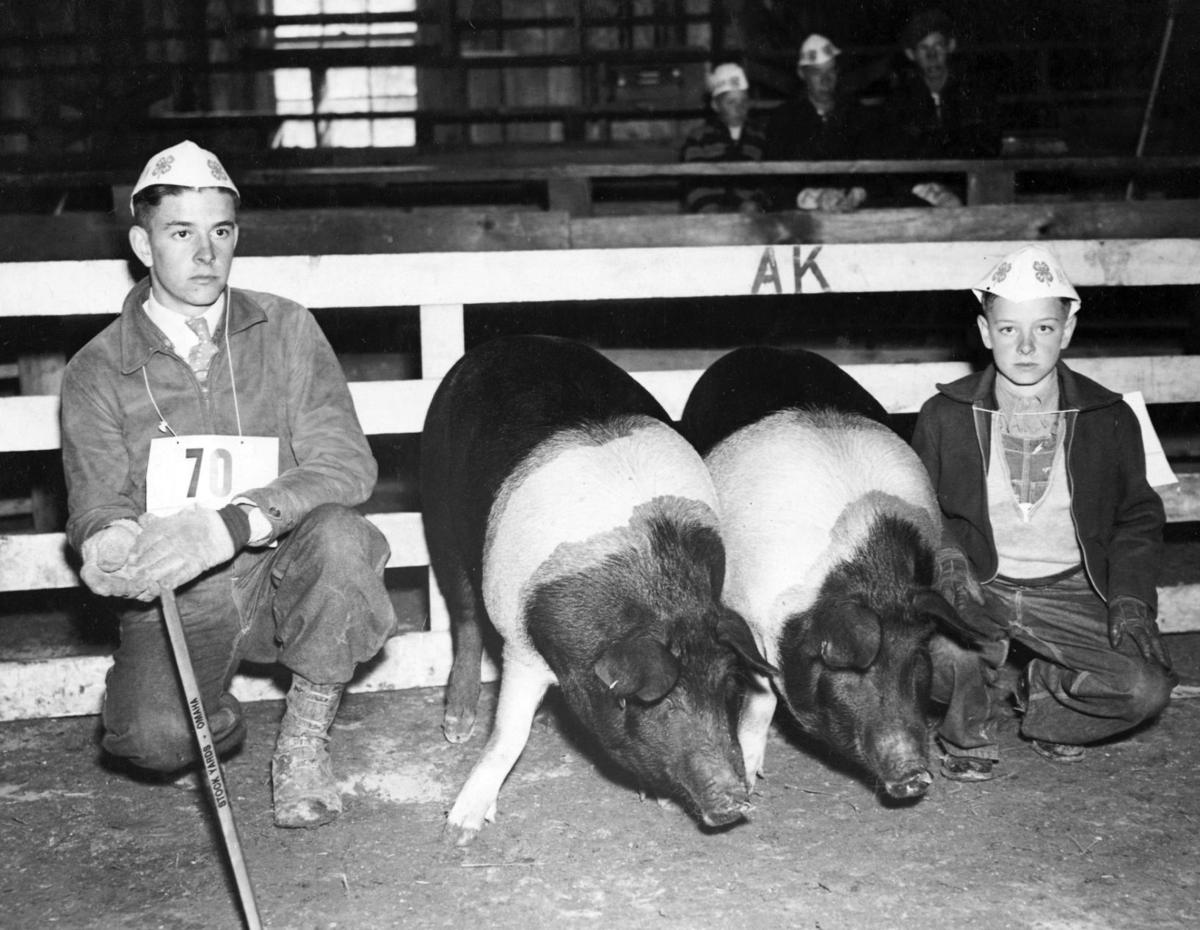 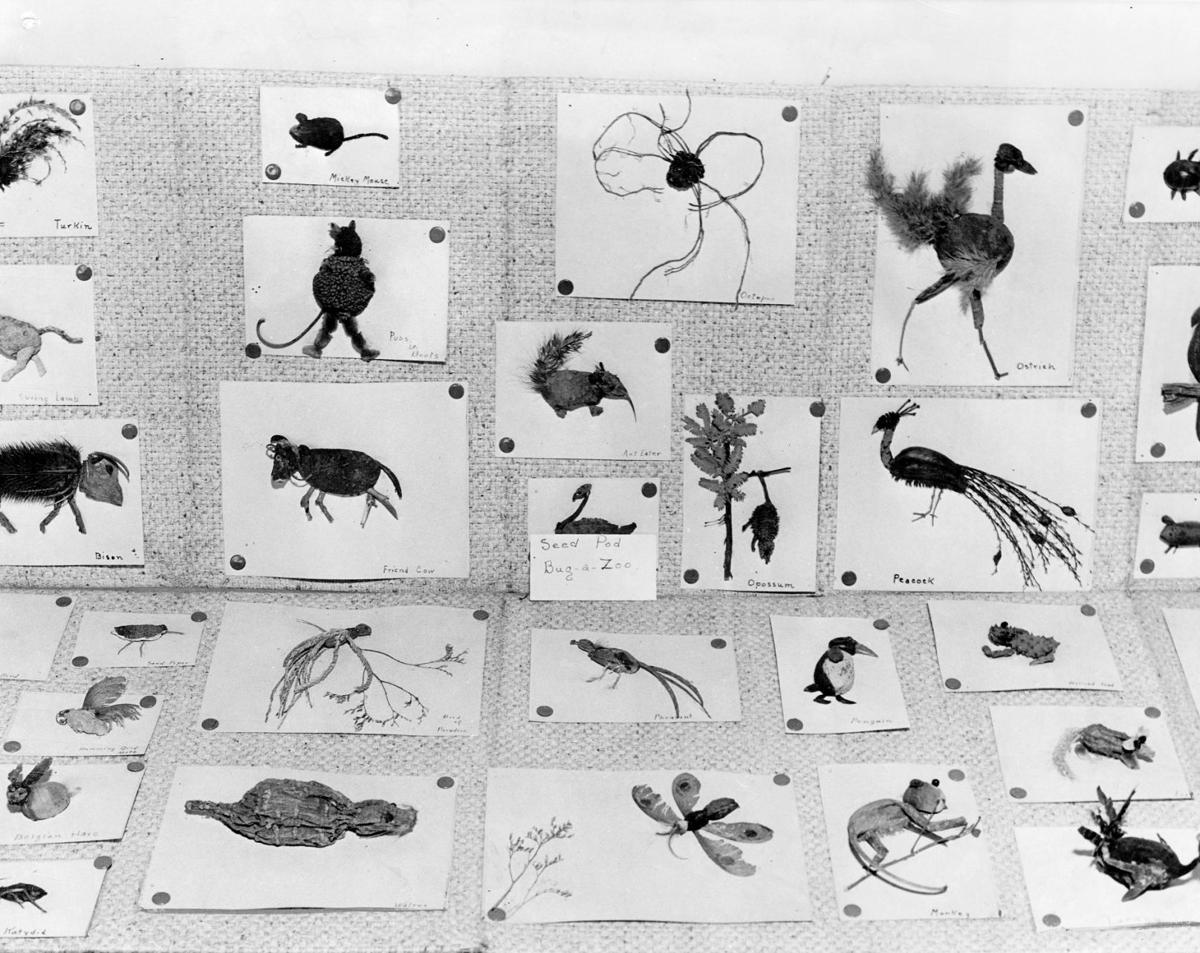 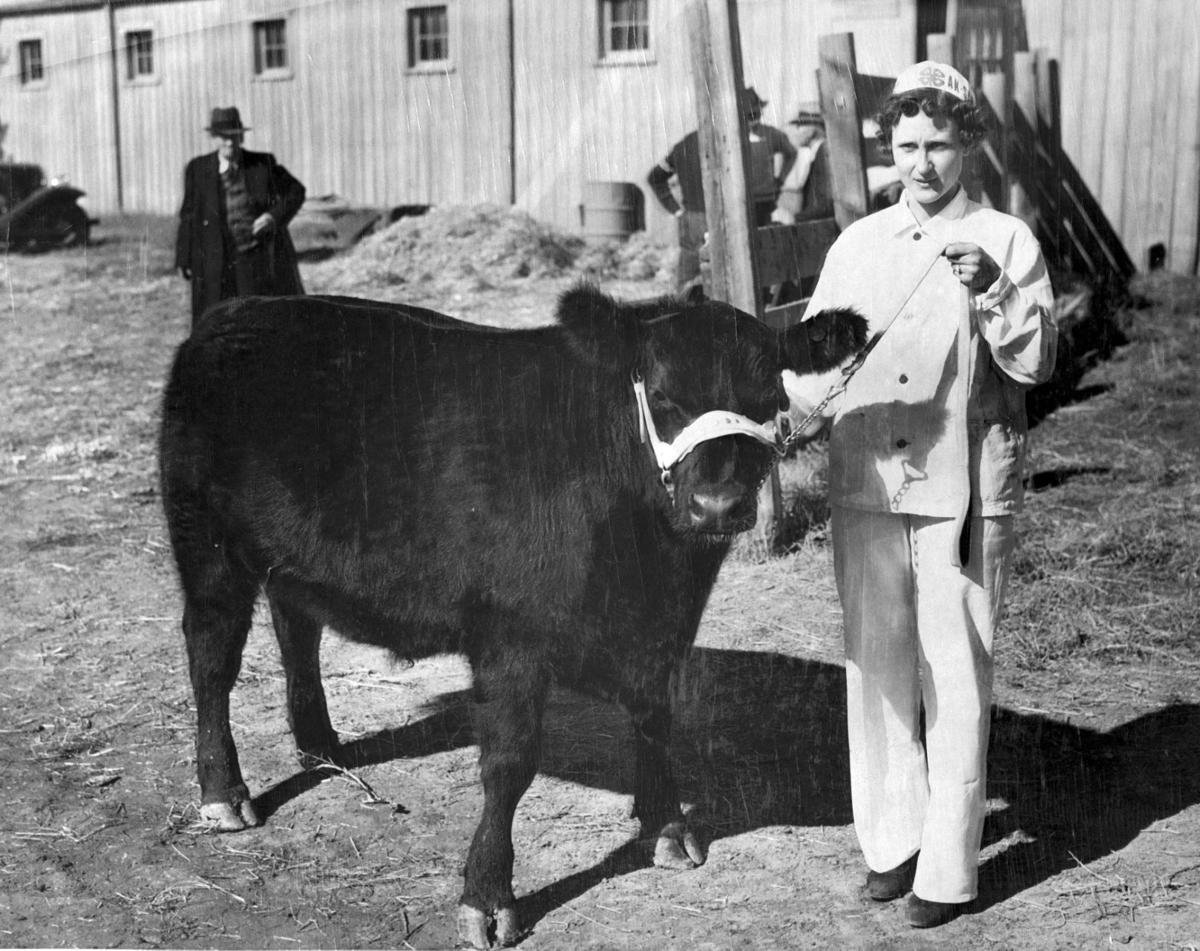