55 years ago, Nebraska's insurance chief — with the aid of state troopers — blocked Woodmen from leaving Omaha
0 Comments
Share this
1 of 4 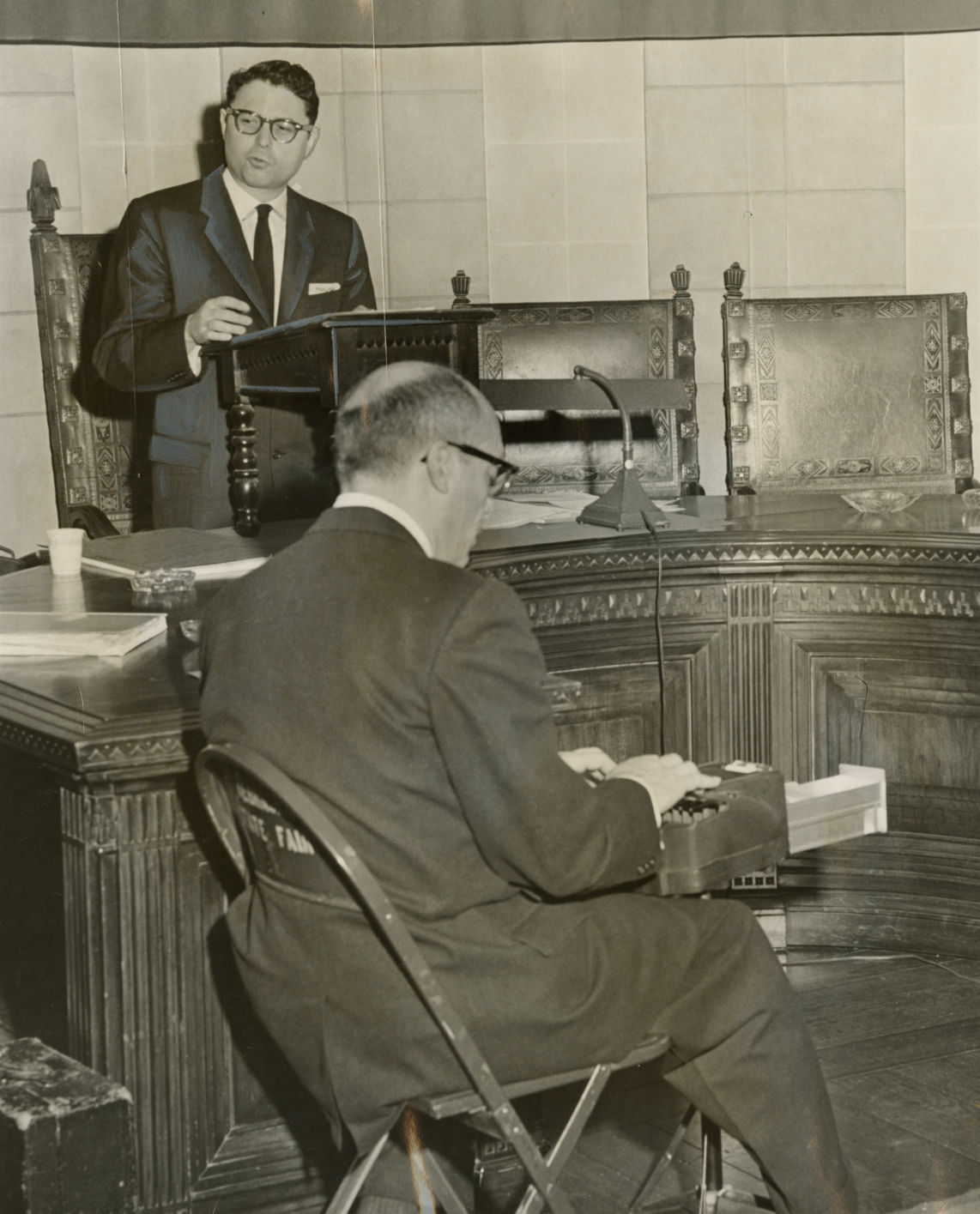 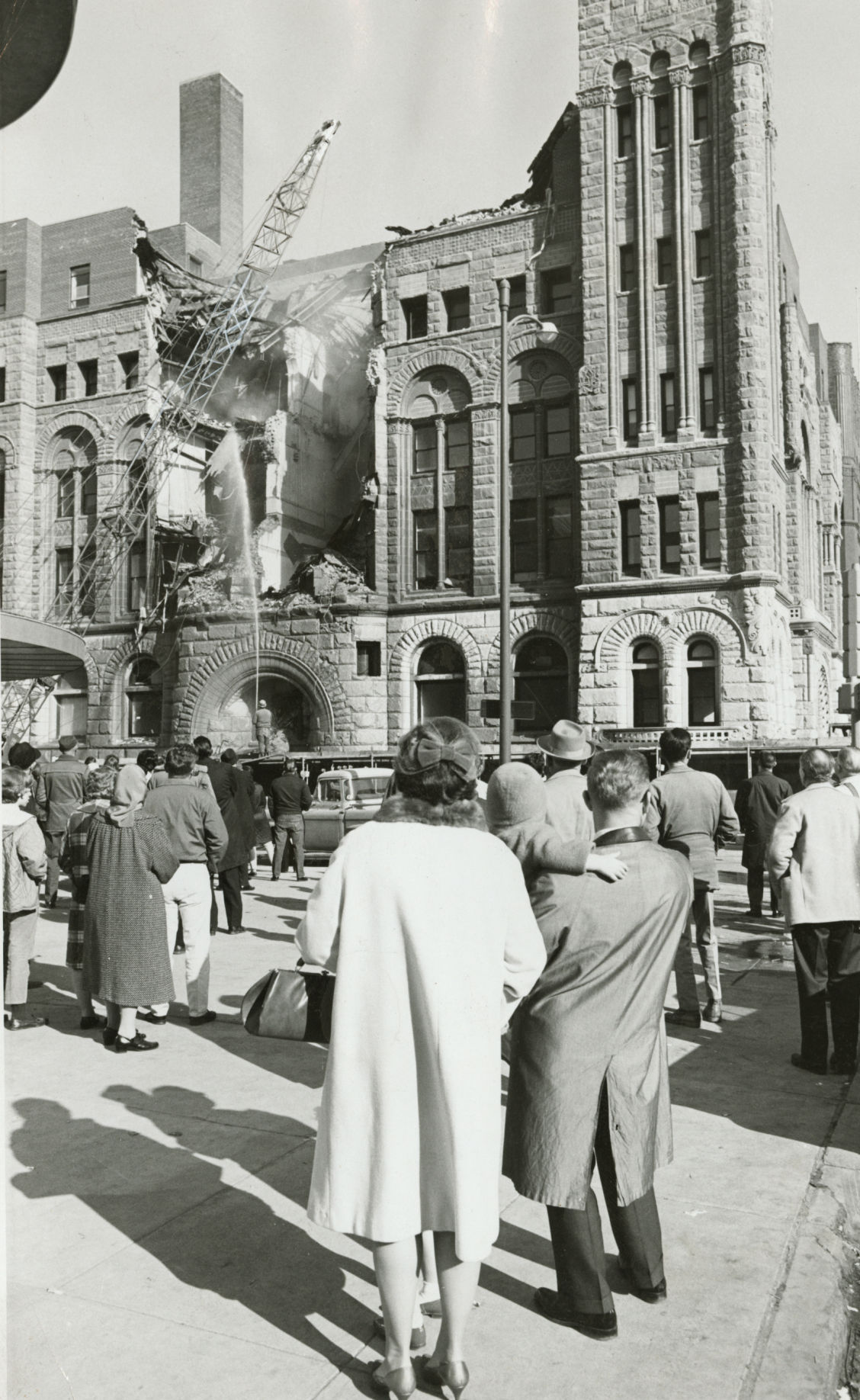 The Woodman Tower under construction in April 1968 It opened in 1969. 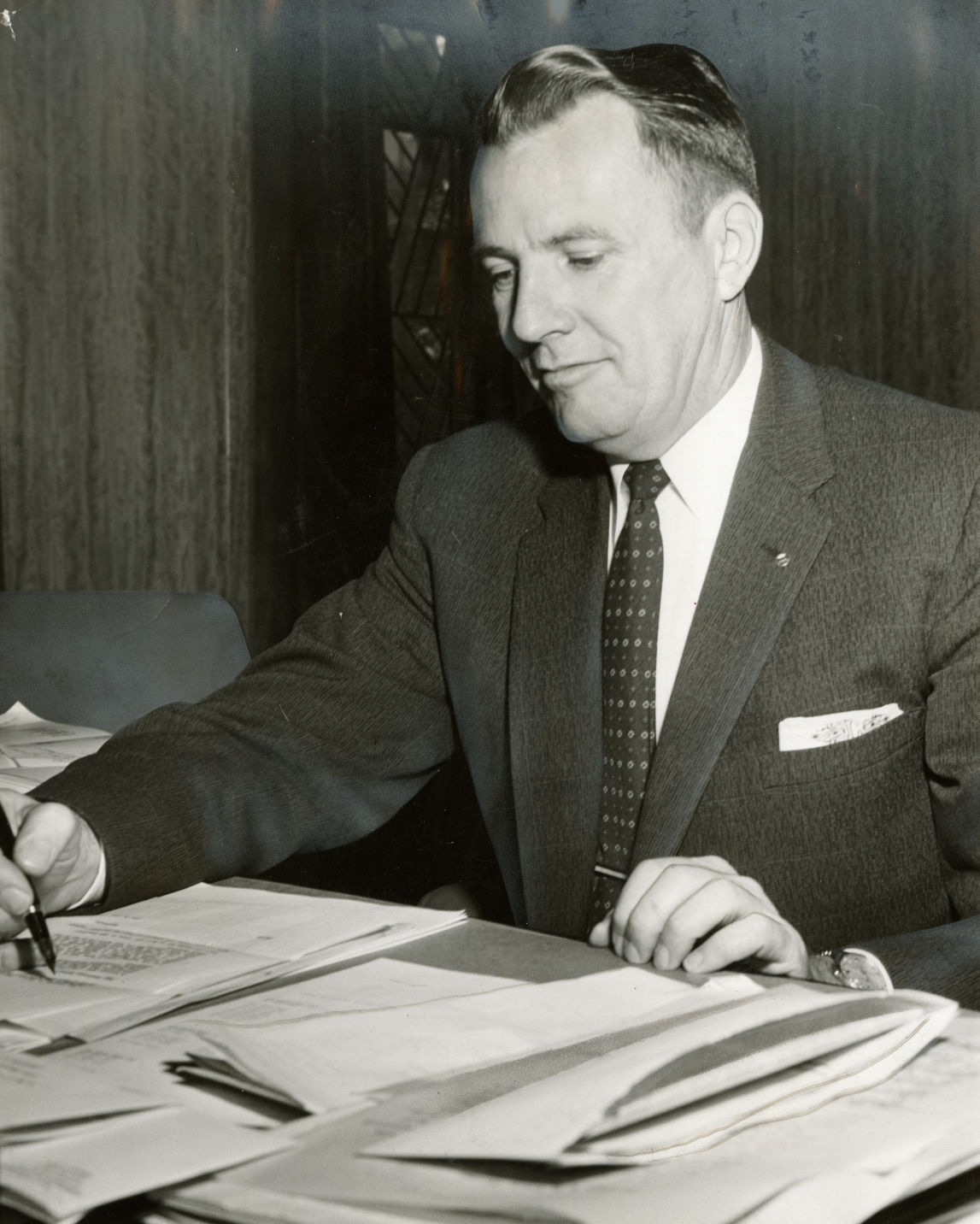 Howard Lundgren, president of Woodmen of the World, was a longtime Omahan who opposed a move by the company. But former Georgia Gov. Eurith Dickinson Rivers, chairman of Woodmen in 1960, favored a move. He appointed a 22-member committee to decide on a home office location and wrested authority away from Lundgren.

It was a chilly March evening in 1960 when feisty Bill Grubbs stood in front of a moving truck outside Omaha’s Insurance Building at 17th and Farnam Streets.

Grubbs was Nebraska’s insurance director, and he took his job seriously, driving to Omaha from Lincoln to stop what he believed was an illegal act: Woodmen of the World Life Insurance Society leaving Nebraska.

Personally embodying the state’s insurance law, Grubbs literally blocked the truck from heading to Atlanta with sacks of bonds, a strongbox jammed with $100,000 in small bills and other Woodmen financial assets and paper records. The moving men, faced with the determined Grubbs and some Nebraska state troopers, eventually gave up and left.

It’s a scene not likely to be repeated these days, even though there’s talk again about Woodmen moving out of Omaha.

The issue today is a property tax dispute with Douglas County. At stake is $800,000 in annual property taxes, as well as the jobs of 550 people who work for Woodmen in Omaha.

The issue 55 years ago was an effort by Woodmen directors from the South to bring Woodmen to one of their states, most likely Georgia. Woodmen was smaller 55 years ago — $220 million in assets versus today’s $10 billion — but even then was an important part of Omaha’s economy, with 488 employees.

After winning the confrontation on the street, Grubbs quickly posted a state insurance examiner at Woodmen’s vault to make sure nothing slipped away and to begin looking through the company’s records.

Then someone tipped Grubbs about the nighttime moving plan. After his successful physical blockade, he followed up with months of legal and political maneuvers, with the backing of then-Govs. Ralph Brooks and Dwight Burney.

“We would not have the Woodmen Tower if it weren’t for Mr. Grubbs standing in front of that truck,” Omaha attorney Frank Barrett, who followed Grubbs as the state’s insurance director, told The World-Herald.

Today, Woodmen’s leaders say the fraternal insurance company doesn’t want to leave Omaha. But its appeal for a property tax exemption hasn’t succeeded so far, and relocation offers are coming from Council Bluffs and, once again, Tennessee and Georgia. A property tax exemption is Omaha State Sen. Burke Harr’s priority this year, but Legislative Bill 414 remains in the Revenue Committee.

If a company wanted to move its headquarters to another state these days, said Nebraska’s current insurance director, Bruce Ramge, most likely officials from the two states would share information and coordinate with each other to protect policyholders and ensure a smooth transition.

“They would make certain that the company’s in good standing and when the next financial examination will be due,” Ramge said. “I don’t know, beyond that, that there would be any real legal adjustments.”

But back then, Grubbs’ physical actions and outspoken opposition was just what Nebraska needed to keep one of its corporate jewels.

Rivers, the chairman of Woodmen in 1960, had spent five years convincing a majority of its board members that the company belonged in Atlanta, not Omaha.

He appointed a 22-member committee to decide on a home office location and wrested authority away from Woodmen President Howard Lundgren, a longtime Omahan who opposed a move.

Woodmen’s membership, then as now, was concentrated in the South, even though the company was formed in Omaha by Joseph Cullen Root in 1890, due in part to Nebraska’s low tax rate on insurance premiums and other legal protections.

Once Rivers’ plans were out in the open, Grubbs announced his goal to protect Woodmen’s insurance policy owners, alleging that their well-being was endangered by the internal struggle for control of Woodmen.

“If we hesitate to act or move forward in a weak and dilatory manner, the fight will be lost to those who act with greater strength,” he said. “I do not intend to allow this to happen.”

Grubbs had his examiners scour Woodmen’s records, turning up what he called “conflicts of interest” among its executives. Nebraska-friendly lawyers filed a lawsuit asking the court to prevent Woodmen from leaving on the grounds that its state insurance charter banned such a move.

Grubbs argued that Nebraska law allowed a departure only in case of a merger or a declaration of insolvency.

He said “selfish interests” were trying to take over the company and move it out of Nebraska. He asked a state court to take control of the company and said he wouldn’t renew Woodmen’s insurance license as long as Rivers “continues to exercise his present authority in the society.”

Grubbs said he would terminate the Woodmen’s business operations “unless an immediate change in the attitude of the directors is indicated.” Nevada’s insurance commissioner, in touch with Grubbs’ office, suspended Woodmen’s license to sell insurance in that state.

Among the “conflicts” Grubbs’ examiners uncovered: A Woodmen director was paid $7,000 plus $8,000 as an auditor, even though the auditor’s job had been eliminated; “physical violence” took place between a director and an investment employee over a $908,000 loan to a company where the director worked; the company planned to spend $1 million for a “business machine” that was “of questionable value.” (It was an early computer.)

Grubbs summoned Woodmen directors to a public hearing in Lincoln and teamed up with the Attorney General’s Office to order Woodmen to show cause why its insurance license should not be revoked and the business liquidated. He subpoenaed three high-ranking Woodmen officers to another public meeting. They attended but refused to answer questions on the advice of their attorneys.

Omaha’s Chamber of Commerce put together a booklet for Woodmen directors giving reasons why the company should remain in Omaha, including letters from the governor, the mayor, the City Council president and others pointing out Nebraska’s advantages to insurance companies.

Matters came to a head at a Woodmen board meeting in Miami in April 1960. Lundgren, a respected leader and graduate of the University of Omaha Law School’s night classes, gave a speech attacking the directors who favored moving out of Omaha. He then left the meeting and checked out of the hotel, according to news accounts.

Two of the 15 directors sided with Lundgren, two abstained and the others opposed his views. The board fired him. Grubbs subpoenaed the minutes of the meeting.

Woodmen’s personnel manager tacked a statement on to an employee bulletin board saying that the move away from Omaha had been canceled, although Georgia’s insurance director, Zack D. Cravey, later said the idea was still alive.

Soon after, Woodmen’s board named a new president: J. Richard Sims, who had been executive secretary. Although the Woodmen board said it had dropped the idea of moving, the possibility was kept alive by Rivers and some others within the company.

On Oct. 5, 1960, Sims finally ended the controversy by issuing a simple statement: “The Woodmen of the World Life Insurance Society’s headquarters will remain in Omaha.”

By 1965, William H. Martin, from Lakeland, Georgia, had been elected president of Woodmen. He and newly elected Mayor A.V. Sorensen announced plans for the Woodmen Tower to be built on the site of Omaha’s old City Hall and the next-door Insurance Building, which Woodmen owned, with Omaha National Bank as the ground-floor tenant.

The plan originally was for 25 stories, later expanded to 30, counting the bank’s lower levels, with one-third of the space available to rent to other tenants. The building, costing upward of $16 million, would become one of Woodmen’s assets backing up its insurance policies.

The election of Sorensen, a respected businessman, marked a turning point for Omaha city government, which was recovering from a bribery scandal involving his predecessor, James Dworak.

When Sorensen announced the Woodmen Tower plan, he said that the day after he was elected, he began looking for a way to dramatically demonstrate that Omaha had “new leadership, new direction and a new city government that is going to be more progressive.” The Woodmen Tower proposal was it.

Martin said Woodmen wanted to be a part of the Sorensen administration’s efforts to revitalize downtown.

A few months later, Woodmen bought the Elks Building at 18th and Dodge Streets for $600,000 and traded it for the old City Hall, plus $100,000 to cover remodeling, for use as an interim city hall. Woodmen demolished the City Hall and the Insurance Building and built the Tower, which opened in 1969.

A World-Herald editorial noted that the Tower was the biggest step toward improving downtown in 50 years. “What Omaha needs is a rebirth of downtown. ... Omaha can be a great city if we who live here have the will to make it so. The place to start is the remaking of downtown.”

Improvements such as the Central Park Mall followed, and by 1996, city leaders were announcing $1 billion in other new downtown buildings.

Ben Neff, Nebraska’s insurance director from 1967 to 1971, told The World-Herald that the story of Grubbs’ battle with Woodmen was well-known within the Nebraska Department of Insurance at the time.

“That was kind of a big thing in his tenure,” Neff said. “You don’t very often get a company to try to move out of the state in the middle of the night.

“I always felt that they ought to thank Bill Grubbs for having that building downtown.”

Amid questions about whether the bill represented the best state policy, a proposed tax break for Omaha’s Woodmen of the World Insurance Society moved an initial step toward passage on Thursday.

Had the exemptions been granted, they would have knocked off about $40 million in taxable valuation and saved Woodmen $800,000 or so in property taxes.

Bill to give Woodmen $800,000 tax benefit finds critics in Legislature

State lawmakers moved on to another debate without taking a vote on whether to advance a bill that grants a property tax exemption on the portion of the 30-story Omaha headquarters used by the firm. Senators did reject a hostile amendment and a motion to kill the bill.

The bill grants a roughly $800,000 annual property tax exemption on part of the 30-story Omaha office building that is used by the firm. The Legislature voted 29-14 to advance the bill, which now must clear two more rounds of consideration.

Woodmen likely would face property taxes in other states, too

Woodmen officials and local business leaders have said that, in the wake of a Douglas County decision about its property tax status, representatives from Iowa, Georgia and Tennessee have wooed the company and its jobs.

The Woodman Tower under construction in April 1968 It opened in 1969.

Howard Lundgren, president of Woodmen of the World, was a longtime Omahan who opposed a move by the company. But former Georgia Gov. Eurith Dickinson Rivers, chairman of Woodmen in 1960, favored a move. He appointed a 22-member committee to decide on a home office location and wrested authority away from Lundgren.