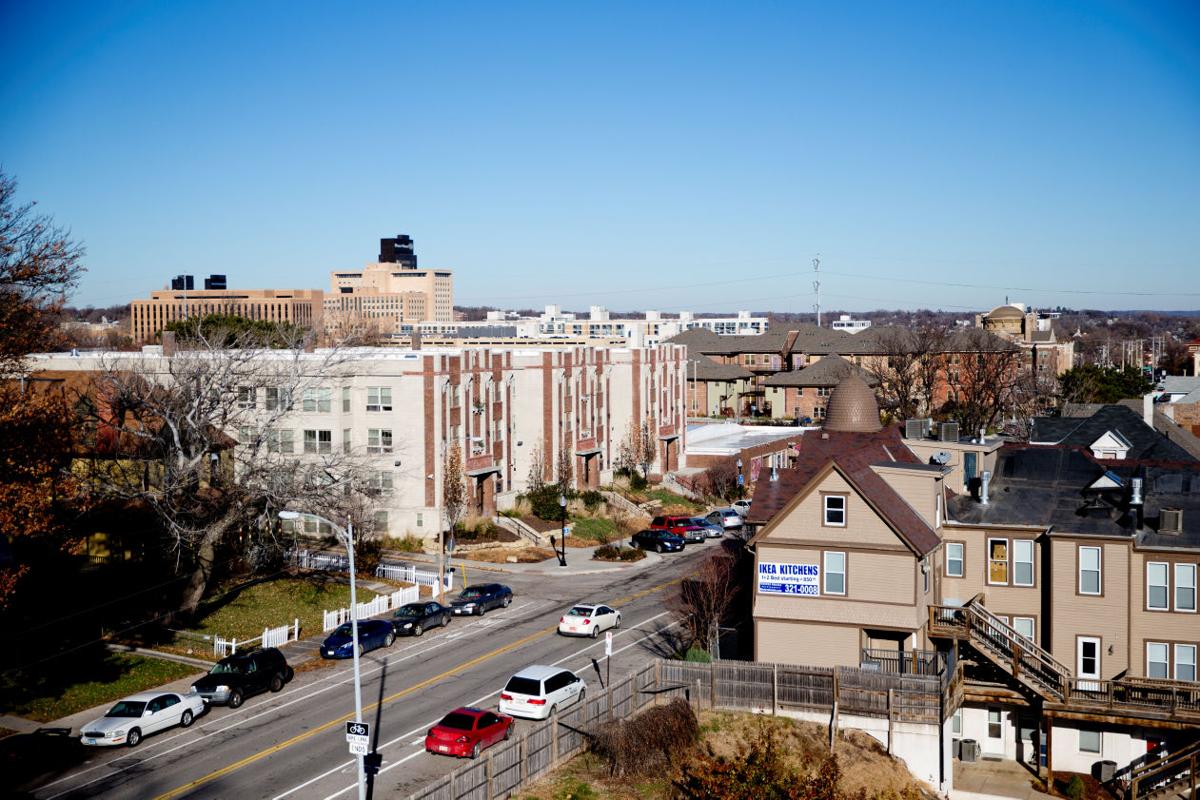 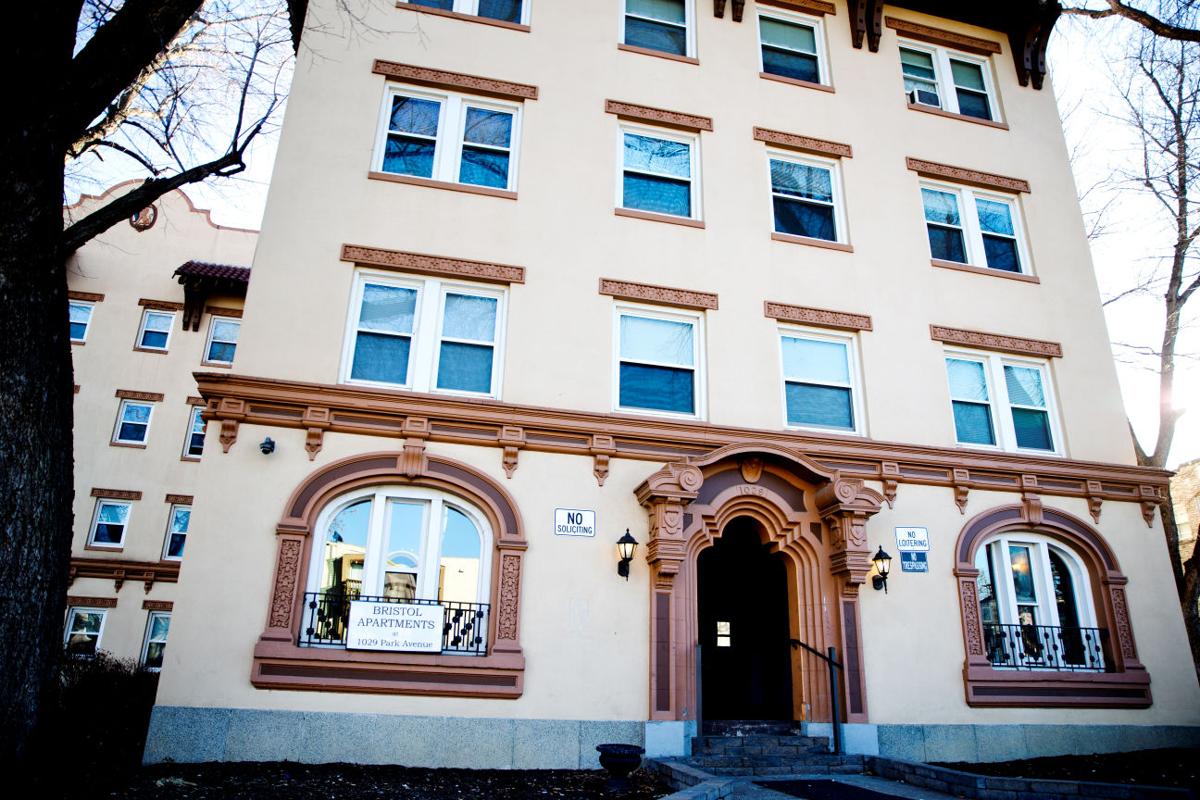 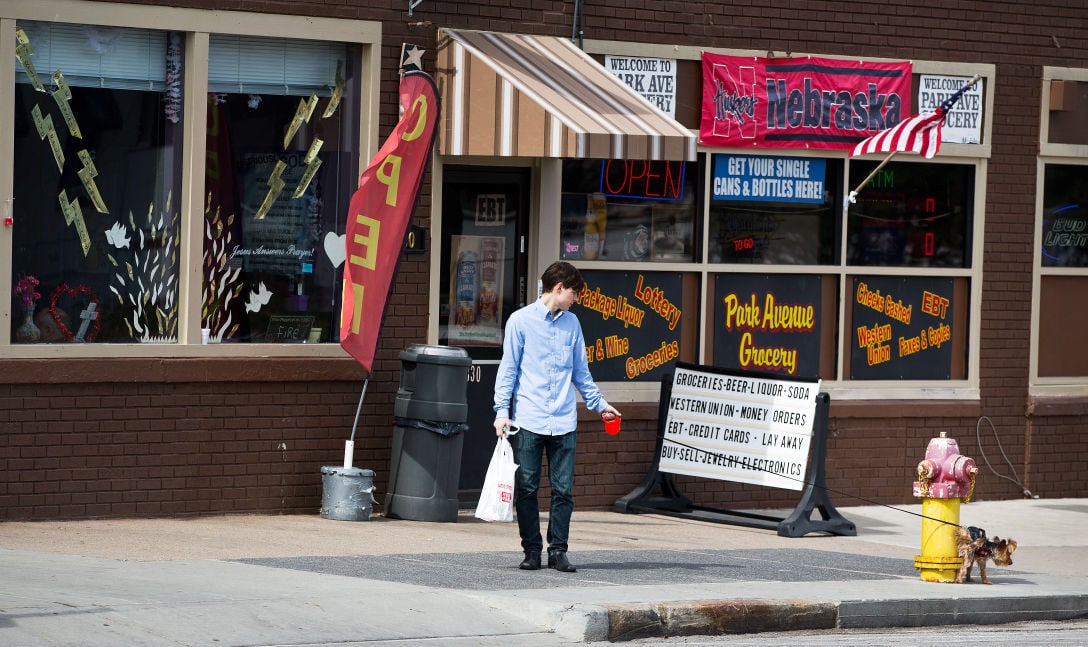 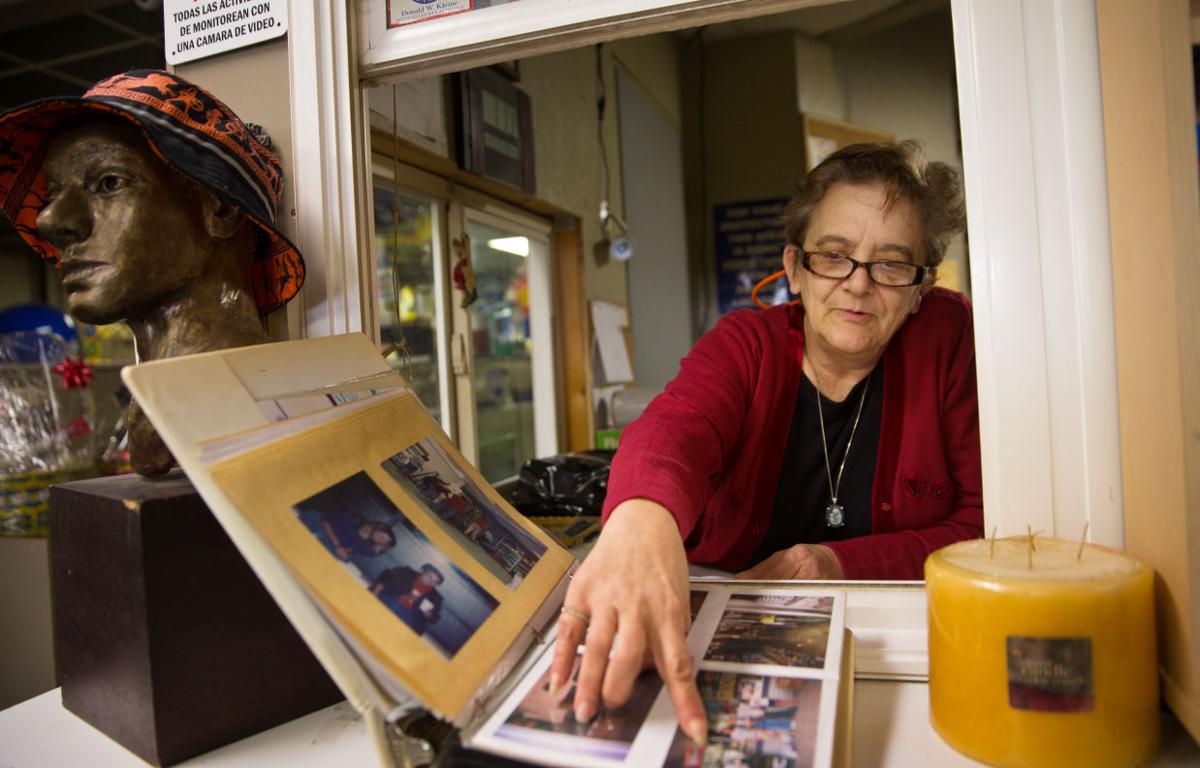 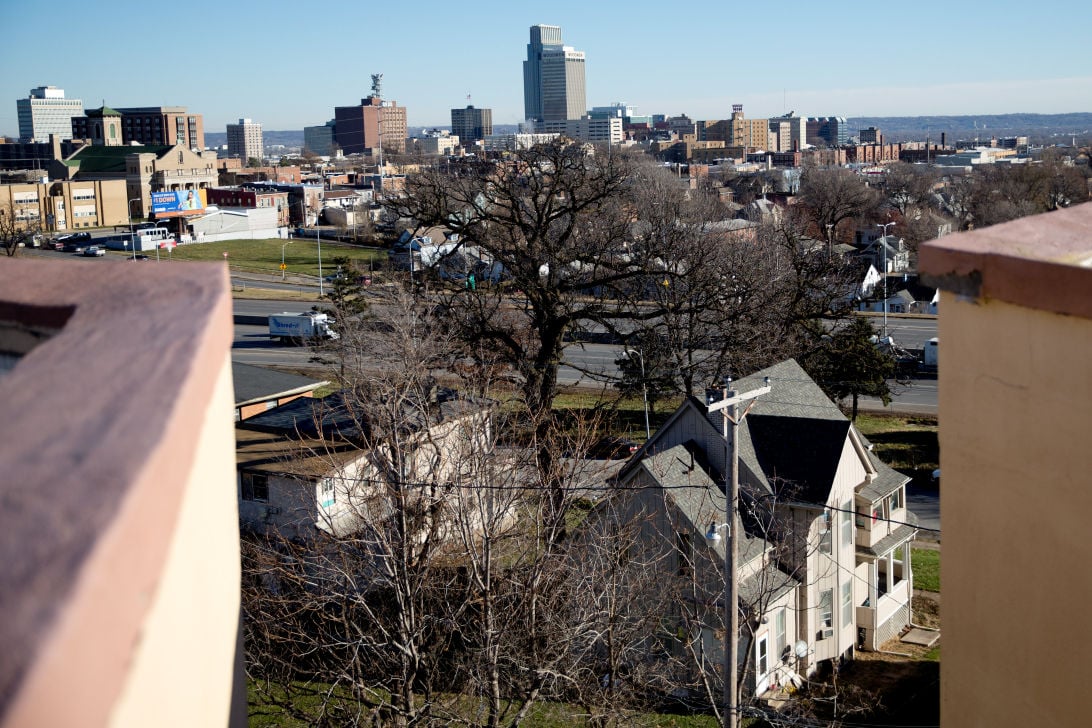 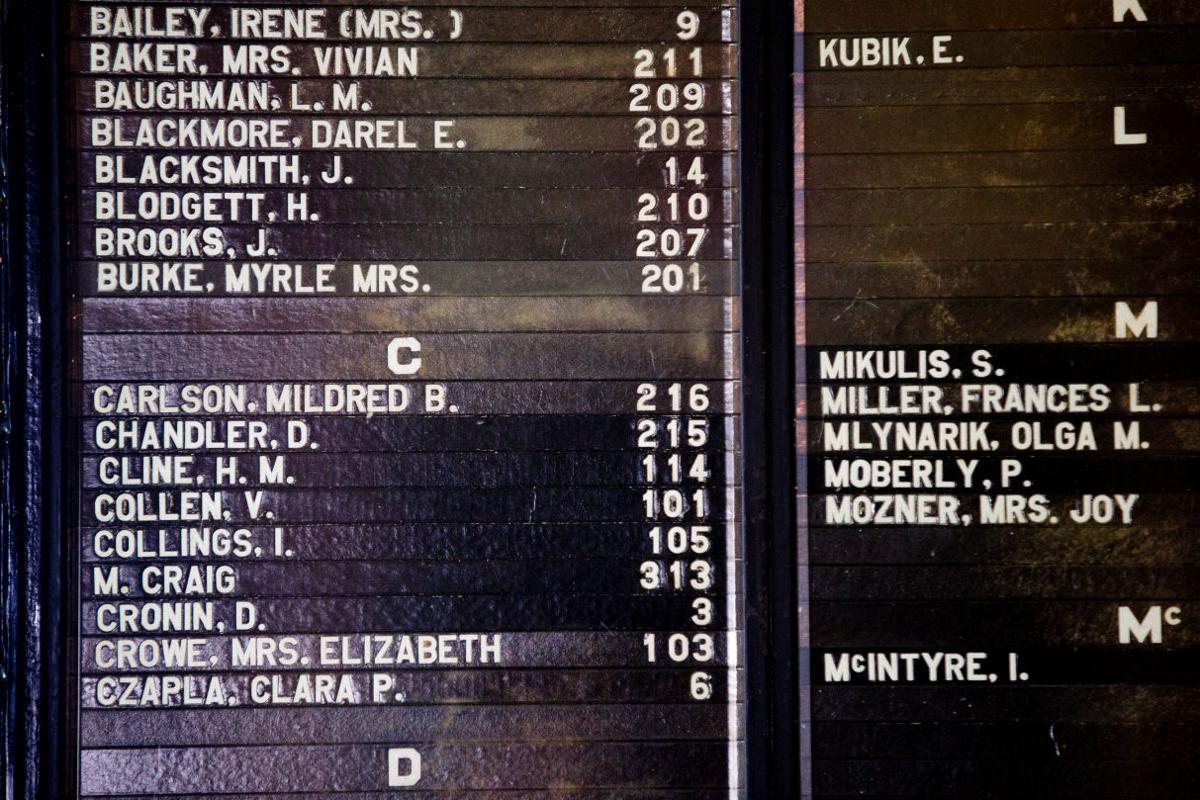 Headed to the nearby supermercado, Josh Strobel and his dog, Gucci, sauntered out of their revamped Park Avenue apartment building — the one that until its makeover a few years ago was shuttered and fraught with social ills.

The Idaho-born university student and bow-tied Yorkie strolled by the storefront mission that doles out daily counsel and discounted items.

They passed the man snoozing in a booth, and the expanded pharmacy that used to share the corner with Sheri’s strip joint.

Before scooting to class, Strobel walked his furry friend around other neighborly spots, including the family-owned convenience store finally shedding its window security bars, and another batch of apartments set to transform into trendy market-rate housing.

Few would disagree that revitalization efforts of the past few years have boosted this inner-city pocket once considered a home of last resort.

But now InCommon Community Development is sounding an alarm, fearing that the influx of investment and wealthier “gentry” is starting to raise rents and push out poorer folks who had an established support network in the area of Leavenworth Street and Park Avenue.

Leaders of the nonprofit based along Park Avenue are hoping greater awareness will minimize potential downsides of gentrification — or a changing of the neighborhood’s residents from poorer people to wealthier ones, with the attendant increases in rent and fancier services.

“It began as pure benefit,” said InCommon Director Christian Gray, citing the shabby-to-chic transformation five years ago of the row of apartments where Strobel lives. “But as other developers and opportunities have shown themselves, it started to take more of a form of displacement.”

Gray’s concern spreads beyond Park Avenue — and into other aging Omaha neighborhoods joining the growing nationwide number of areas changing with the infusion of more affluent residents and economic development.

“Gentrification has come back to public consciousness as cities have benefited from population growth and redevelopment,” said Stockton Williams of the Washington, D.C.-based Urban Land Institute. “It’s happening probably with greater velocity and in more places in recent years.”

A national analysis by Governing Magazine identified 12 Omaha census tracts (of about 135 in the city) as “gentrified” by accelerated shifts in housing values and education levels. That report, which was published last year and looked at years through 2013, didn’t capture Omaha’s more recent flurry of urban redevelopment.

Even without data, area neighborhood leaders point to obviously transformed enclaves in Little Italy just south of downtown, Benson and other midtown areas such as Blackstone.

Marked by architectural and urban charm, those older places tend to be close to the city’s core where increasing numbers of millennials, merchants and baby boomers have flocked in recent years.

Fueling the midtown draw is job creation at the University of Nebraska Medical Center campus and commercial activity at the $365 million Midtown Crossing campus built six years ago by Mutual of Omaha.

To be sure, experts say, the changing of the guard that accompanies gentrification isn’t on its face negative: Who doesn’t want a distressed area re-energized with fresh workers and a higher tax base?

But forcing residents to uproot risks further segregation and resentment that can fester into unproductive behavior, said Omaha Public Schools board member Tony Vargas, who before coming to town taught low-income students in Brooklyn areas dramatically altered by high-rent condos and businesses of that New York City borough.

The original character and fabric of gentrified neighborhoods also can suffer if longtime artists, merchants and tenants are priced out with soaring property values, said David Harris, a New York community development official who moved six years ago to the Omaha area.

InCommon worries about the shuffling around of disadvantaged families like those it is trying to reach through education and social programs based at its facility on Park Avenue near Woolworth Street.

“We don’t do ourselves any favors by pushing poverty from one neighborhood to the next,” InCommon’s Gray said.

So far in Omaha, any adverse effects of gentrification have been relatively minimal, certainly not to the proportions seen in areas of Brooklyn, Portland or Chicago, says Robert Blair, an urban studies expert at the University of Nebraska at Omaha.

“I don’t know where the break point is,” he said. “It’s a subtle sort of thing that takes place over a period of time. That is why monitoring is so important.”

David Levy, a lawyer who serves on the governing boards of the Omaha Housing Authority and Omaha By Design, worked previously as a land use lawyer in San Francisco, where he saw more severe housing constraints. Displacement locally should be watched, he said, but added that he can’t see Omaha’s urban revival as “anything but a good thing.”

InCommon leaders have started to talk to groups and city officials about ways to guide gentrification and form partnerships so people of all socioeconomic levels win.

Gray said he’s unsure what has happened to midtown residents who over the last few years left homes that were torn down or completely renovated. No one has kept track. Gray said he knows at least one client who landed in a shelter and can’t help but wonder the fate of others.

Meanwhile, InCommon has put money where its mouth is, buying the century-old Bristol Apartments on Park Avenue before a private developer could. The goal: to keep the 64 units at about $450 a month, as rents around it often have doubled that amount.

City planners agree with InCommon that a mix of income levels could be ideal for neighborhoods, but don’t necessarily agree that city government should intervene.

The dominant tool the city now uses for urban redevelopment is tax-increment financing. Gray suggested, for instance, that developers receiving such a financial break could set aside a certain number of units for lower-income tenants.

Furthermore, Thele said, he doesn’t see a problem at this point with gentrifying neighborhoods. Most of the redevelopment of urban areas, he said, has involved decaying or vacant structures and empty lots.

“Should these deteriorating properties be kept in that state so rent stays low?” asked Thele. “That doesn’t make any sense to me.”

Thele said he has not seen “substantial” displacement, though he acknowledges that no one has kept a tally.

Rather than messing with a free market, Thele said he believes the best route to maintaining affordable rents in gentrified areas is with initiatives such as InCommon’s Bristol.

The idea is to instill hope in the future of those residential pockets, and ultimately draw more outside dollars.

Thomas noted that, on the other hand, private developers today aren’t needing much prodding to enter areas such as Park Avenue, Little Italy and Blackstone.

“We see it as revitalization,” said Bret Cain, the company’s vice president of operations. “We’re very happy with how things are going.”

Cain declined to disclose how much the company has put into rehabbing. Harvest didn’t seek public financing on those Park Avenue structures that would have revealed such detail. The firm’s midtown rents range from $700 to $1,800. “Naturally, you get a few unhappy with the rent increase,” Cain said. He said the community trade-off is updated housing with green space.

Harvest is about to open the new Ekard Court at 617 S. 31st St., where 27 beat-up apartments once were. That $3.6 million project, which brings 36 luxury apartments, was assisted by city-approved tax-increment financing.

While Harvest has revived properties elsewhere in the city, its recent purchase of an old Park Avenue laundromat for a headquarters portends continued focus in transforming midtown buildings into market-rate apartments.

It is not alone.

That momentum started with retail revival and shifted to housing. Their latest venture calls for transformation of the Colonial Hotel at 38th and Farnam Streets, which most recently was a worn boarding house charging $100-a-week rents.

The plan is to return the century-old property to its roots as a fancy Renaissance Revival-style apartment structure. In doing so, monthly rents are to rise to between $850 and $1,400.

Clarity’s Mike Peter, who also is on the governing board of InCommon, said Omaha’s urban conversion projects, including the Colonial, have been obsolete properties crying out for change.

A solution that doesn’t compromise revitalization, yet secures families, is creation of more affordable housing options in and around the transformation. Omaha, he said, is in a better position to do that than coastal cities that face land shortage and extreme rent-income disparities.

“What people want is better housing; they don’t want to just live in a certain place.”

From InCommon’s view, not all developers have been willing to work with it to ease negative effects of transformation.

Interviews with area residents show plenty of work ahead in blending the two income worlds on Park Avenue.

Strobel, the Creighton University student who has lived on the corridor since last year, likes the proximity to campus. He likes the dog-friendly landlord, the interior of his revamped Art Decos unit. He fully supports the street ministry next door.

But the 23-year-old pre-med student is weirded out enough by what goes on outside after dark that he prefers his wife, Alexsandra, not walk the dog alone. He said the yelling and commotion stems from people he doesn’t recognize.

And he’s moving after graduation.

Kristie Eisenauer, who lives in a lesser-income apartment south of Art Decos, describes her street as two different worlds. She can’t believe the rents. “I mean, they’re trying to make this Beverly Hills.”

Mary Ann Caniglia has outstayed most on Park Avenue. And though she considers many of the old guard her family, she appreciates changes that have pushed out bad elements.

Her family-owned Park Avenue grocery is making its own shifts — adding deli sandwiches and Blue Moon to the lineup of generic beers. Caniglia, her husband and children also are removing security bars from their store windows “so we can see the progress.”

Said Caniglia: “We’re excited about another phase to Park Avenue.”

The effort has some Morton Meadows residents anxious about parking, congestion and overall change to their neighborhood, whose proximity to major employers such as the University of Nebraska Medical Center has made it prime for redevelopment and new housing.