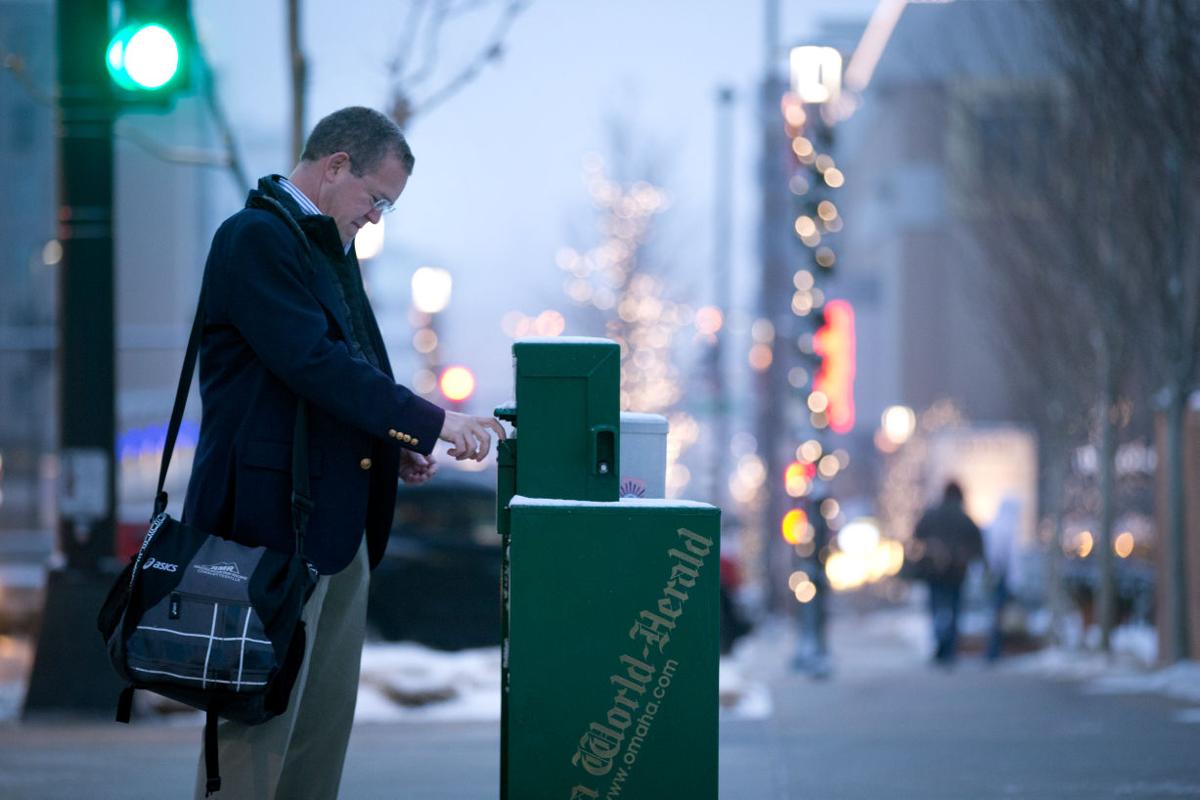 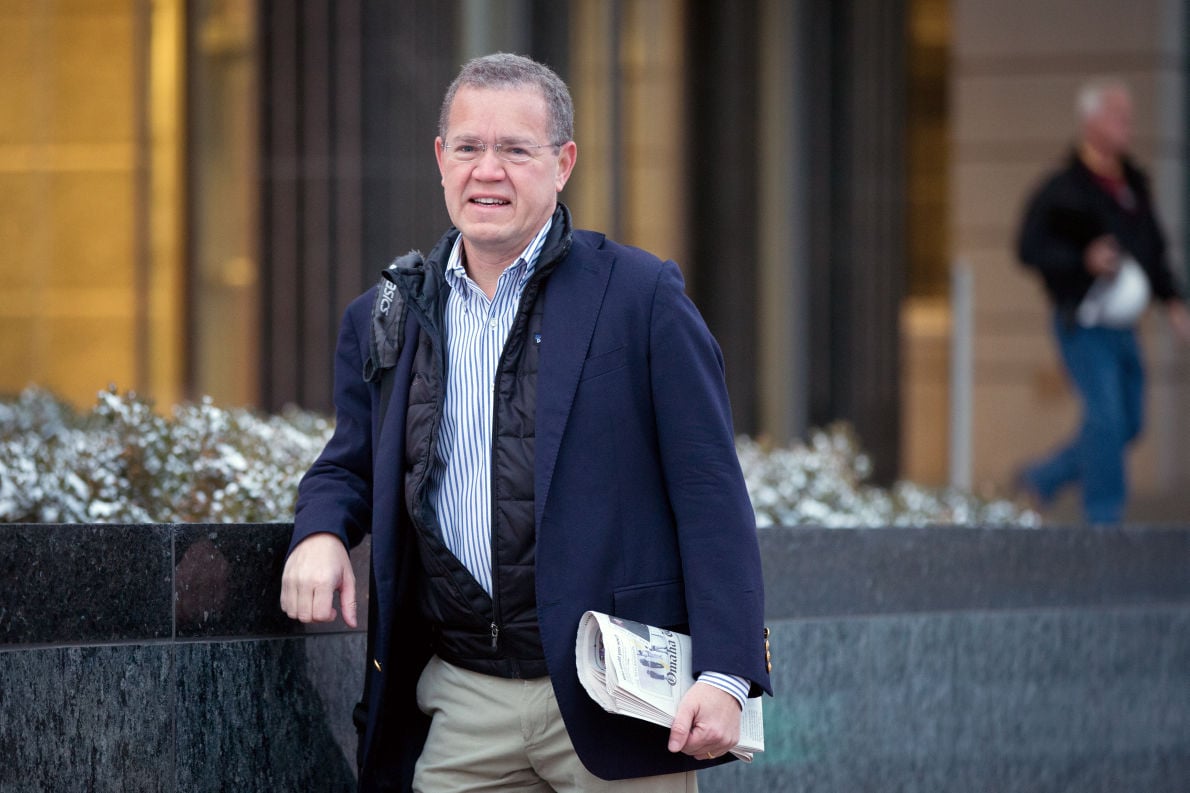 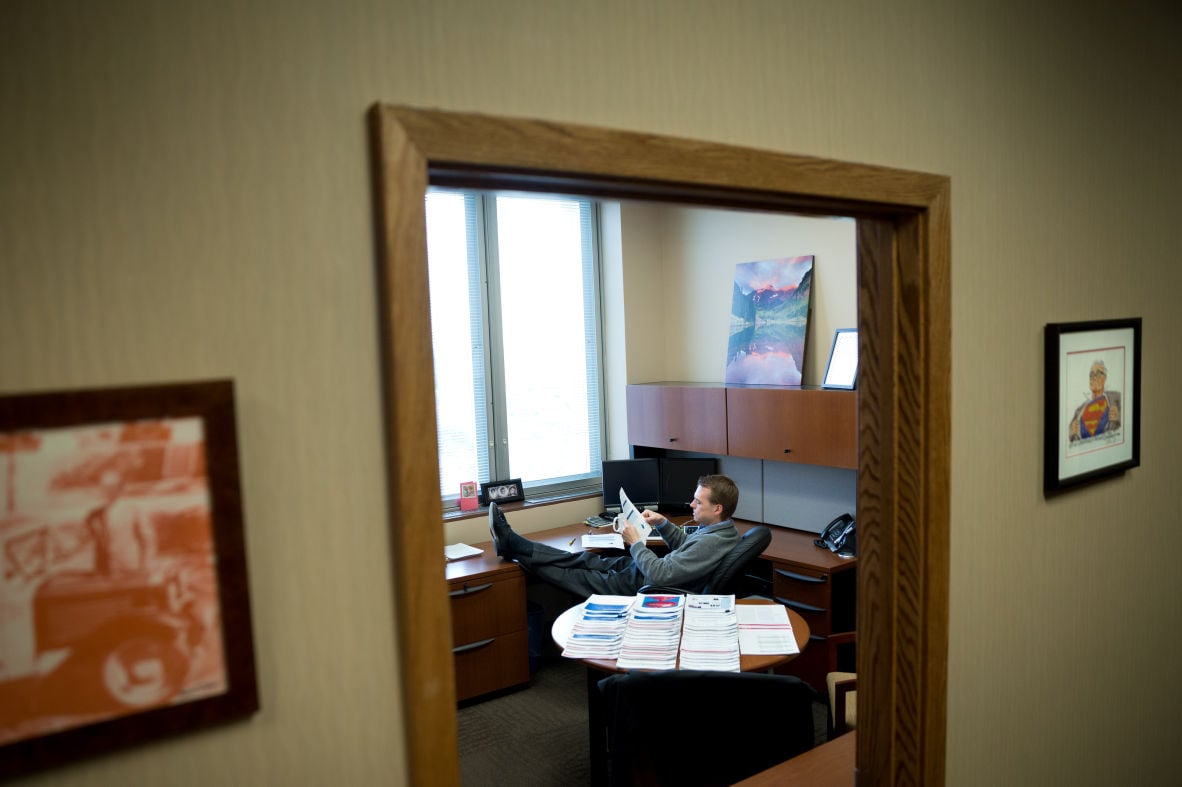 The doorway to his office is flanked by two images of Warren Buffett as Todd Combs, a Berkshire Hathaway portfolio manager, reads through the table full of packets. 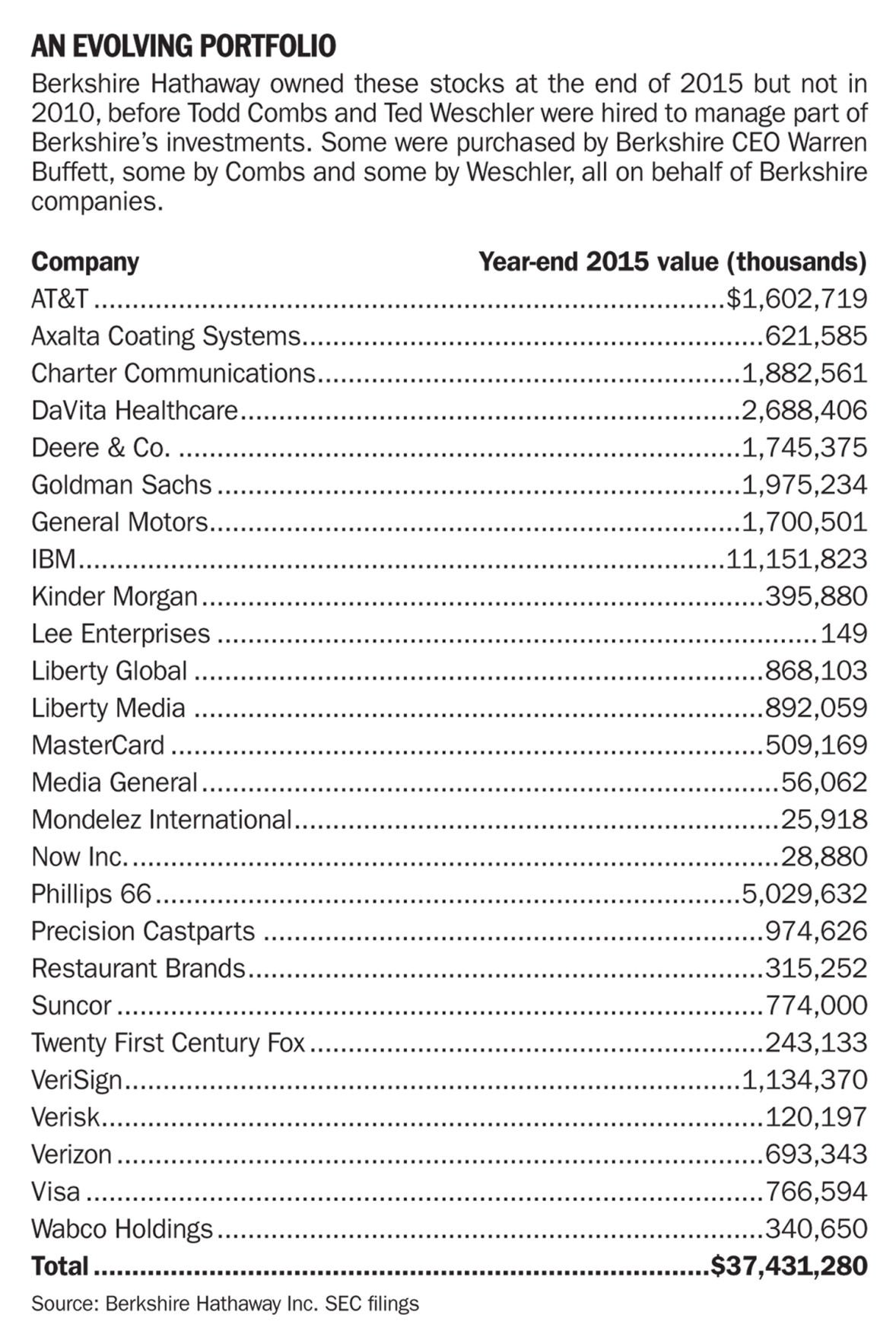 For five years, Ted Weschler and Todd Combs have been investing for Berkshire Hathaway, multiplying their company portfolios and winning praise from Chief Executive Warren Buffett.

The two men now manage about $9 billion each of the Omaha conglomerate’s money, while Buffett makes investment decisions on about $120 billion more.

Since Combs and Weschler joined Berkshire, they and Buffett have invested in 26 companies that weren’t on Berkshire’s previous investment list. At the end of 2015, the shares of those 26 companies were worth about $37 billion.

Combs was hired in 2010 and Weschler in 2011 to supply investment expertise in case Buffett is no longer on the job. Since then, they have become important parts of Berkshire’s management team, assuming some executive duties such as negotiating purchases and serving as chairmen of subsidiary companies in addition to their investing duties.

Neither are candidates to succeed Buffett, 85, as chairman and chief executive. Buffett wrote two years ago that if there’s a change in the top office, Combs and Weschler “can be of particular help to the CEO in evaluating acquisitions.”

As for their ability to manage all of Berkshire’s investments someday, Buffett wrote to his shareholders in 2012, “you can rest easy when they take over.”

Each year the amount of money Combs and Weschler manage grows, starting with about $1 billion in their first years. Berkshire adds about $1 billion a month to invest, mostly premiums collected by its insurance companies, earnings by its other businesses and dividends from its stock holdings. Some money is used for acquisitions as well.

Berkshire usually doesn’t report who makes all of its investment decisions, and the company declined to comment for this article. But Buffett has said that while he usually makes investments in the billions, Combs and Weschler deal in hundreds of millions.

Buffett has disclosed some investment decision details, however.

It was Buffett who chose IBM, now an $11 billion holding for Berkshire. Weschler bought shares in DaVita Healthcare Partners, a chain of medical clinics, a holding that grew to $2.7 billion by the end of 2015.

Berkshire’s $800 million investment in Visa Inc. is a likely Combs choice because it was reported before Weschler joined Berkshire.

Berkshire said publicly that both men had bought shares of DirecTV, which was purchased by AT&T, giving Berkshire $1.6 billion worth of AT&T stock plus cash, amounting to a $3 billion gain.

Cooperation is part of the arrangement for Combs and Weschler. They receive 80 percent of their performance pay from their own results and 20 percent from the other person’s, Buffett reported soon after hiring them.

Perhaps Combs’ biggest score was Precision Castparts Corp., the Oregon-based manufacturer of airplane and aerospace parts. He began buying its stock and told Buffett about the company. In January, Berkshire acquired the entire company, a $37 billion transaction when including assumed debt.

Buffett wrote in his latest letter to shareholders that the acquisition wouldn’t have happened without Combs.

Weschler helped Berkshire acquire Devlet Louis Motorradvertriebs, a German retailer of motorcycle apparel and accessories; a group of newspapers from Media General; and assets of the mortgage lender Residential Capital, Buffett has said.

From the start, Buffett has praised the two and their work. In 2011, he wrote to shareholders:

“They have excellent ‘business minds’ that grasp the economic forces likely to determine the future of a wide variety of businesses. They are aided in their thinking by an understanding of what is predictable and what is unknowable.”

The first live streaming of the annual meeting will give shareholders around the globe a look at Warren Buffett in action.

The doorway to his office is flanked by two images of Warren Buffett as Todd Combs, a Berkshire Hathaway portfolio manager, reads through the table full of packets. 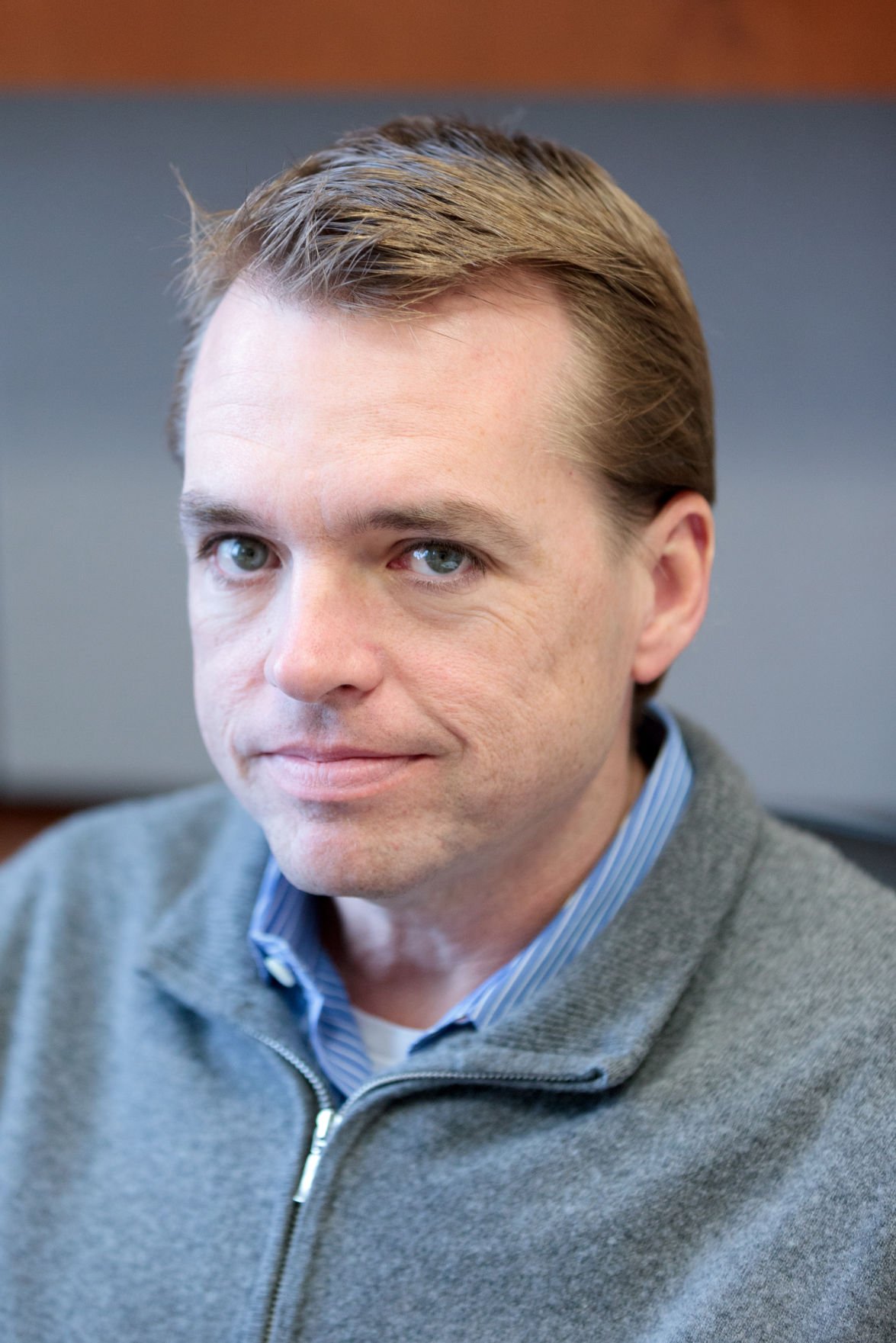