Walter Scott Jr., a giant figure in construction who left an even bigger imprint on Omaha as the city’s biggest and most influential philanthropist, died Saturday morning at age 90.

Scott spent his entire business career with Peter Kiewit Sons’ Inc. of Omaha, starting as an engineer and working his way up to succeed the legendary Peter Kiewit as chairman and chief executive. His decades of leadership helped keep the Omaha-based Fortune 500 company among the nation’s largest engineering firms.

But he left an even bigger mark as a civic leader. Many Omahans barely know of the billionaire businessman beyond seeing his name on the face of building projects he’s supported — the University of Nebraska at Omaha named its entire Aksarben campus after him.

He was a private, pompless man whose low public profile belied the considerable influence his leadership, fundraising ability and hundreds of millions of dollars in personal contributions had on Omaha’s civic affairs.

Arguably, no other Omaha figure in the last half a century has had more influence on the city’s course.

“You cannot find a better model for a citizen than Walter Scott,” Warren Buffett, a longtime friend, said in an interview Saturday. “He was basically a builder, whether he was building Kiewit and physical things or building his vision of Omaha or Nebraska. He was nonstop.”

Editorial: Walter Scott's legacy is measured in dollars but also in his civic leadership

As the co-founder of the philanthropic fundraising organization Heritage Services and its leader for 30-plus years, Scott had an outsized hand in more than $1 billion in major facility projects in his hometown, projects that have altered the city’s quality of life.

The list of projects are too many to name, but they include the CHI Health Center, TD Ameritrade Park, the Holland Center, numerous facilities at the University of Nebraska Medical Center and UNO, attractions at Omaha’s zoo and the new Omaha VA medical facility.

“From growing Kiewit to his extensive philanthropy, his work shaped Omaha and helped build and grow the Good Life we enjoy today,” Gov. Pete Ricketts said of Scott.

And Scott’s work is likely to continue.

According to a statement Saturday from one of his family charitable foundations, the man whose net worth is pegged by Forbes Magazine at $4.2 billion made plans to leave the majority of his estate to charity — an example first set for him by his mentor, Peter Kiewit.

“A city is always an unfinished project,” Scott said in an interview with The World-Herald just over a year before his death, “so we keep looking for new opportunities to improve Omaha.”

The Scott connection with the Kiewit company went back to his father, the late Walter Scott. Peter Kiewit hired the elder Scott in 1926 to supervise building the tower on the State Capitol.

As a teenager, Walter Scott Jr. spent his summers working as a water boy on Kiewit projects.

Scott joined Kiewit full time after earning an engineering degree from Colorado State University, which later became another recipient of his philanthropy. In his early years with Kiewit, Scott went wherever the construction work took him, moving 17 times.

Scott, his first wife, Carolyn, and their first two children once lived over a neighborhood bar. Carolyn Scott died in 1983. Walter Scott later married the former Suzanne Singer in 1987.

Kiewit was already among the nation’s dozen largest construction companies when Scott took over. During Scott’s 19 years as chief executive, Kiewit kept winning some of the nation’s largest contracts to build billions of dollars worth of power plants, highways and tunnels.

But Scott also helped the company diversify into new fields, including energy development and communications.

Those investments became hugely successful and made Scott a billionaire. It became the basis for the wealth that would later fuel much of his philanthropy.

When Scott retired as chief executive in 1998, Kiewit ranked as the nation’s seventh-largest construction company. “I’ve tried to be a good steward of what (Peter Kiewit) left,” Scott said then.

After leaving Kiewit, Scott turned his focus to his charitable endeavors.

In the 1980s, Scott had already been gradually stepping up his charitable involvement in the city. Long a patron of the Omaha zoo and leader of its board, he helped it grow from a modest collection of animal enclosures into one of the world’s best, with cutting-edge exhibits.

At UNO, he became the driving force behind the establishment of the Peter Kiewit Institute of Information Science, Technology and Engineering. Later, his family foundation donated $15 million to build a dormitory at the institute. They were the first of several dormitories on the school’s Aksarben campus, which the school later named for him.

“Nebraska has lost a giant of philanthropy and a stalwart champion of health care,” Gold said Saturday. “Mr. Scott has left a huge imprint on UNMC, and the results of his unwavering support will be felt across the state, nation and world in the form of advances in cancer research, cutting-edge education, biodefense and in many other areas.”

Scott’s charitable involvement particularly took off with his co-founding of Heritage Services.

While vacationing in 1989 with fellow Omaha business leaders Bob Daugherty and Willis Strauss, the men discussed the shared financial struggles of Omaha’s Joslyn Art Museum, on whose board Scott served, and the Western Heritage history museum.

The result was the incorporation of what the men named the Heritage Joslyn Foundation, with Scott as its leader. The plan was for the new organization to run a joint fundraising drive toward upgrading facilities at both institutions.

Tapping Omaha’s other top philanthropists, the $75 million campaign was a tremendous success. The museums gained additional exhibition space that allowed them to bring in national touring exhibits. Attendance boomed.

Seeing a good thing, Scott and the others decided to keep their new creation going. They eventually changed its name to Heritage Services, reflecting the enduring role they hoped it would play in Omaha.

Its 12-member board came to be composed of Omaha’s most prominent and powerful philanthropists, enabling them to leverage their political clout, business acumen and dollars to do still bigger things in Omaha.

Over time, the Heritage board would become a kind of unofficial board of directors for the city. Heritage support for any civic project virtually guaranteed it would become a reality. And from the start, Scott was Heritage’s unquestioned leader.

Besides the quality of life focus, Heritage projects over time came to develop another trait: Heritage usually insisted on overseeing every aspect, from initial studies and planning to fundraising, building contracting and construction oversight.

While such control on projects that often included public money at times stirred controversy, it was something Scott insisted on, wanting to make sure projects came in on time, on budget and did not waste donor dollars.

When Scott and Heritage around 2000 decided a new arena was an amenity the city had to have, they pledged $75 million in private money. Those dollars helped sell city voters on the $281 million project. Counting bond interest, the Heritage pledge saved Omaha taxpayers more than $100 million.

When the new arena opened on Omaha’s riverfront in 2003, the city suddenly had a facility that could attract world-class acts like Taylor Swift and Garth Brooks. Creighton University basketball became a hot ticket. And unexpectedly, the facility also helped Omaha become the unofficial home of the U.S. Olympic Swim Trials.

In all, Heritage over three decades has pumped more than $700 million in private dollars into some $1.2 billion of civic projects.

“The city would be very different if Walter had not lived here and cared the way he did about the community,” said Susie Buffett, also among the city’s biggest philanthropists. “He was one of a kind.”

Scott stepped aside as Heritage’s chairman a year ago. His last project with Heritage was the new medical facility for the region’s veterans, the project Scott said he was most proud of.

He said the desire to spend more time with family was a bigger factor than his health in his decision to wind down his involvement with Heritage and other boards. His second wife, Suzanne, had died in 2013.

Scott rarely revealed the amount of his charitable contributions or even acknowledged giving to projects. But a World-Herald examination of foundation tax records shows his charitable grants since 2001 alone have exceeded $500 million.

Such giving is not expected to end now that he’s gone. Scott said in an interview a year ago that the board of his foundation has made plans to continue the work after his death. He said the foundation’s board will respect his longtime interests but also be flexible to meet the community’s future needs.

“Walter was a team-builder, and the many associations and friendships he developed were a big part of how he was able to have such an out-sized impact,” said Calvin Sisson, president and CEO of the Suzanne & Walter Scott Foundation. “His engineering side liked to tinker with ideas on how to make our community a better place. He succeeded.”

In countless instances, he provided generous financial support without fanfare or public attribution.

The Scott Scholars and Fellows scholarship program is one of the most generous offered in the nation, Creighton President Daniel S. Hendrickson writes.

Marie Clifford, who owned The Afternoon boutique in Omaha, dies at 92

Marie Clifford owned The Afternoon for about 40 years, and her personality was reflected in every eclectic item she found to sell. "She really lived for that store," her son said.

Sen. Deb Fischer says the bipartisan compromise bill would require beef packers to buy more of their cattle through open bidding, a shift that could help Nebraska's beef industry.

Marge Kennedy was a small woman, standing only about 5 feet tall, but conservationists say she and her husband were giants when it came to fighting for wildlife, native prairies and scenic rivers.

If families bequeath even a small percentage of their assets to their hometowns, the effect could be transformational, according to the Nebraska Community Foundation. 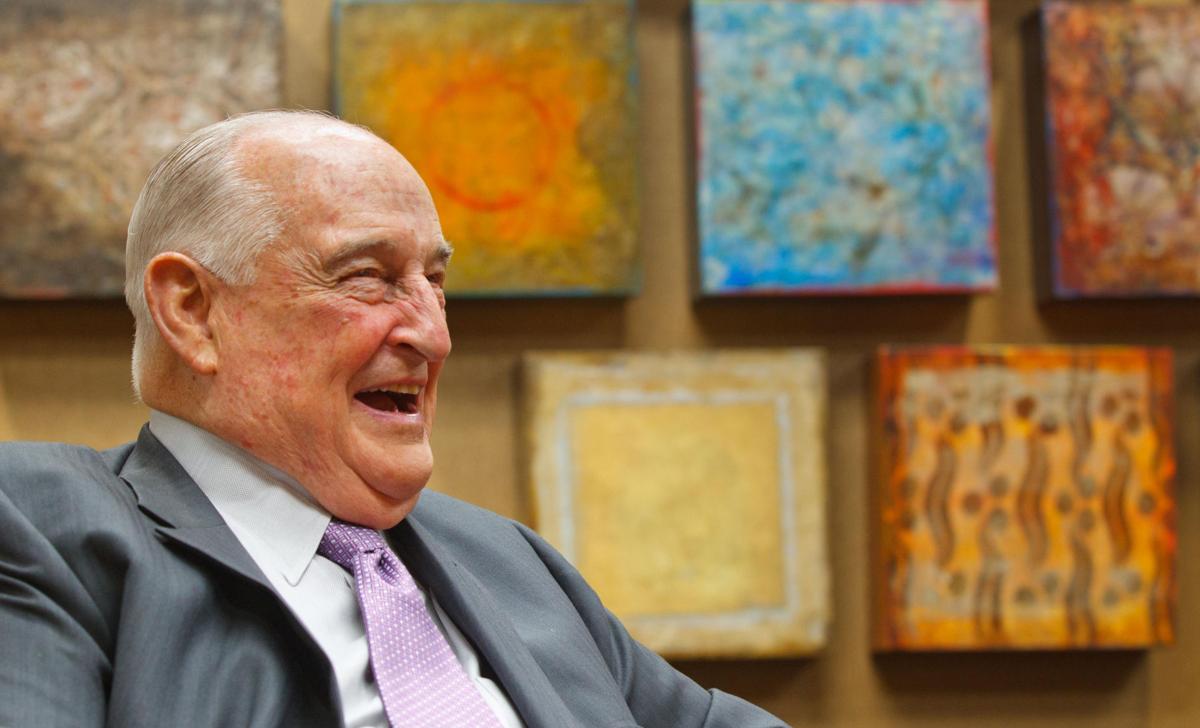 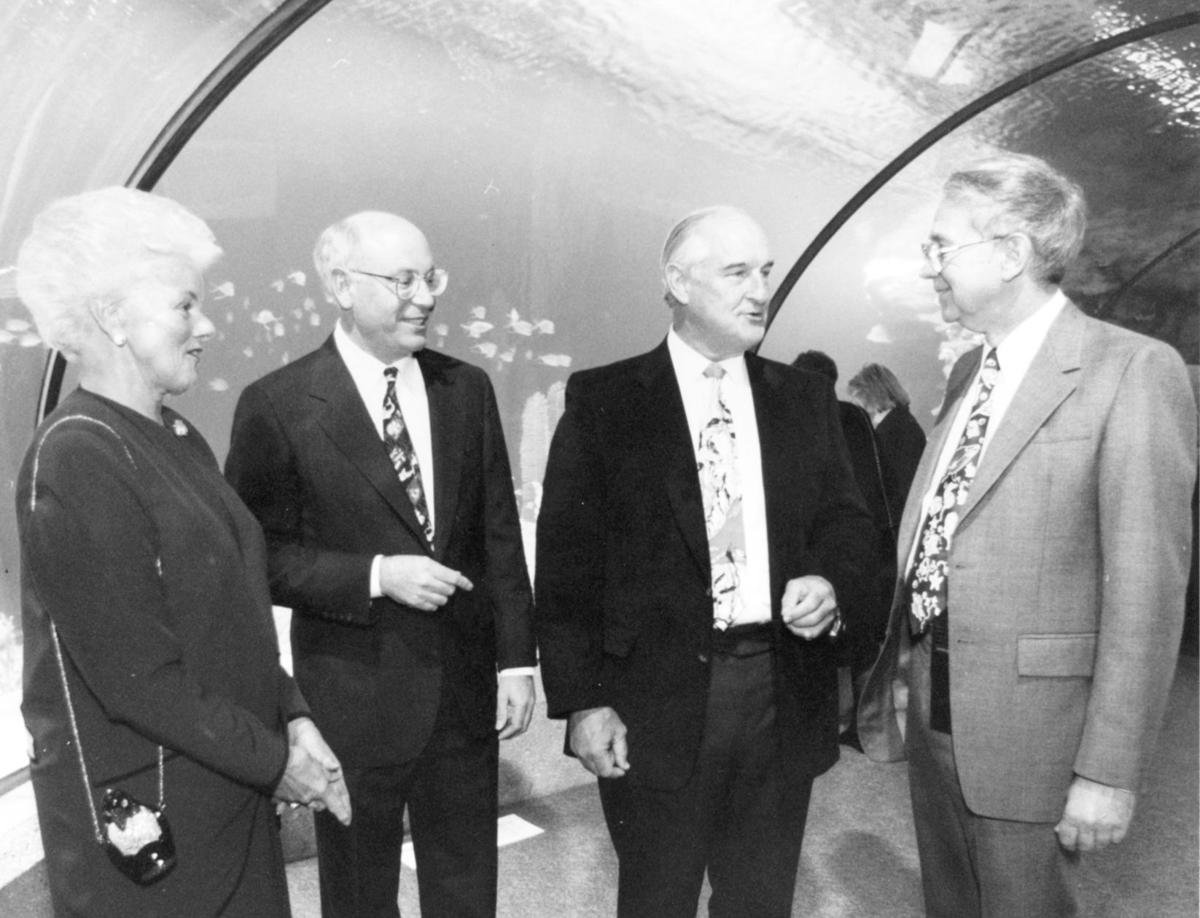 From left, Suzanne Scott, John Boyer, Walter Scott Jr. and Dr. Lee Simmons at the preopening party at the Scott Aquarium at the Henry Doorly Zoo in March 1995. Scott, long a patron of the zoo and leader of its board, helped it grow into one of the world’s best.