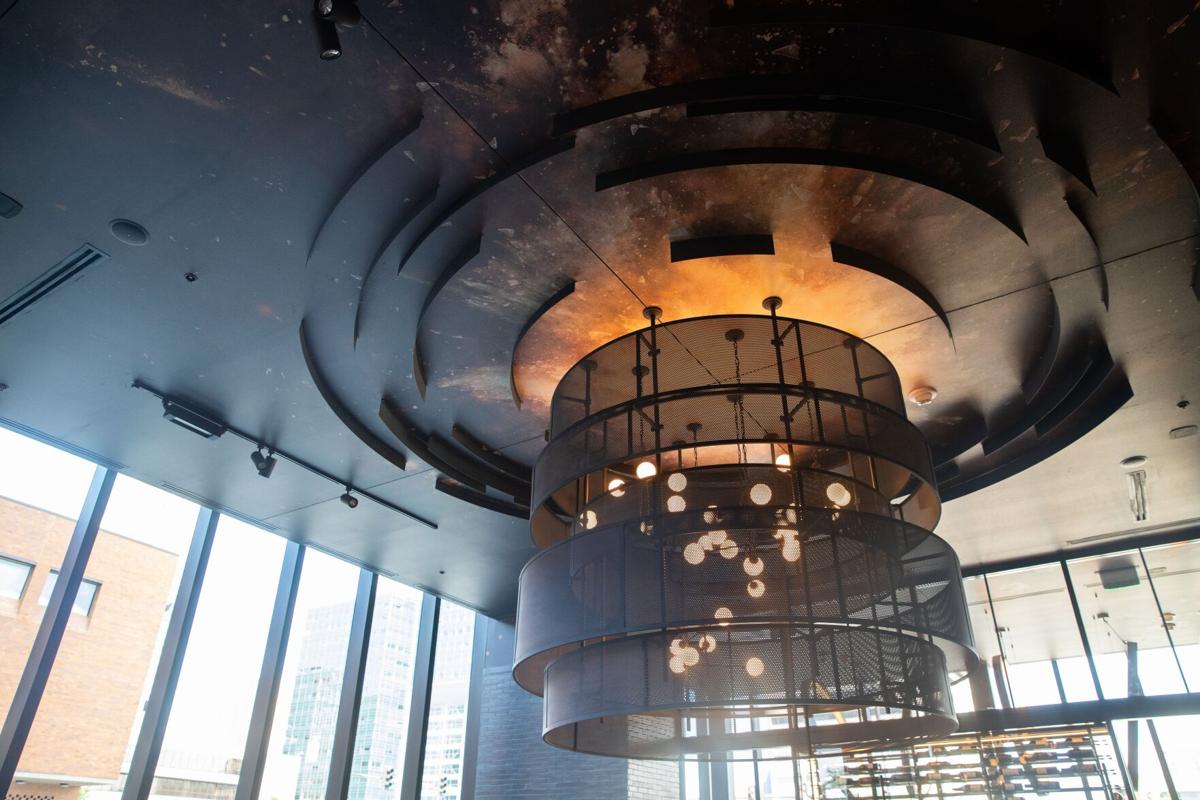 An explosion mural decorates the ceiling of Dynamite Woodfire Grill inside The Farnam. 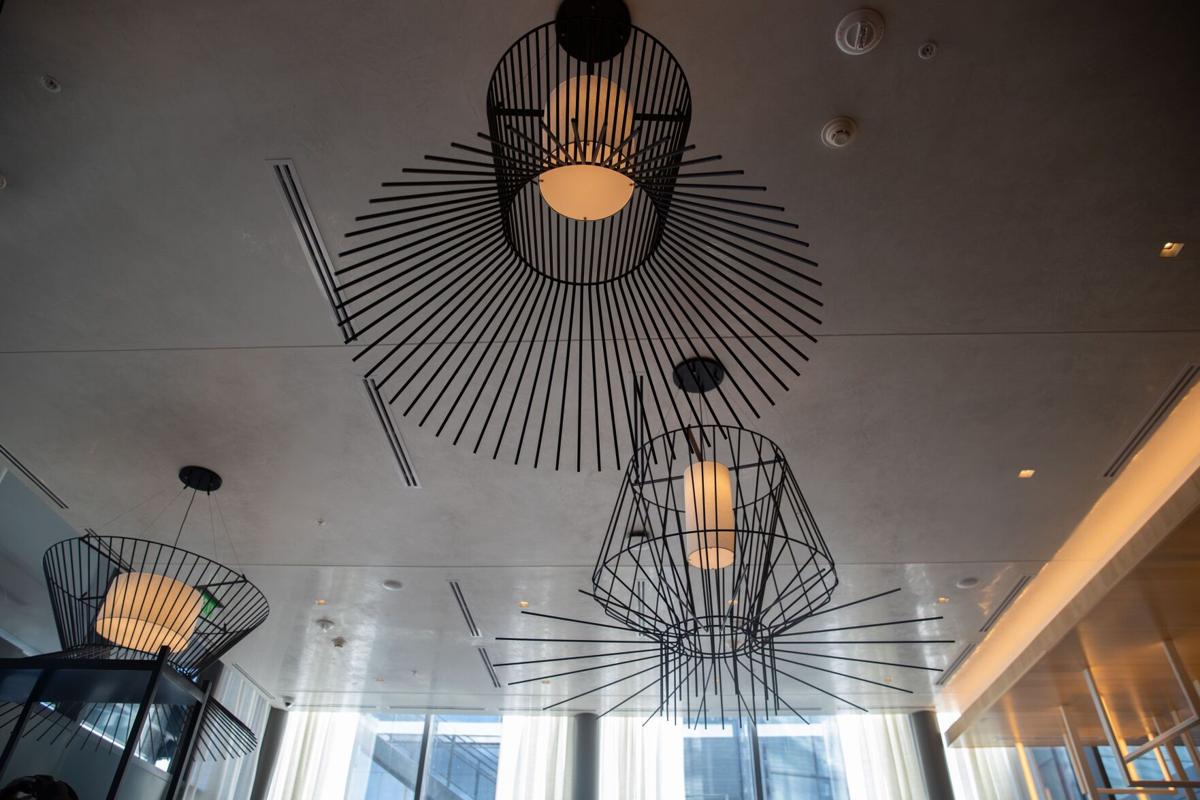 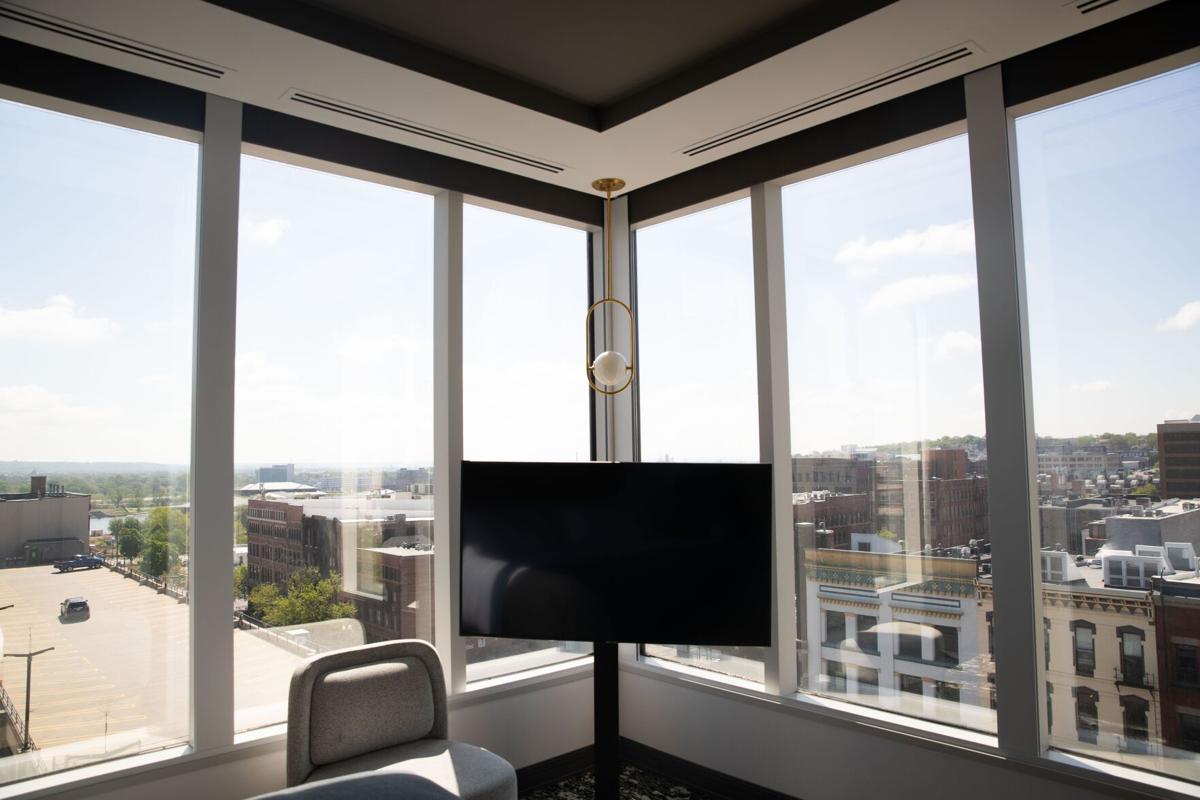 The south view from a corner bedroom inside The Farnam Hotel on Thursday. 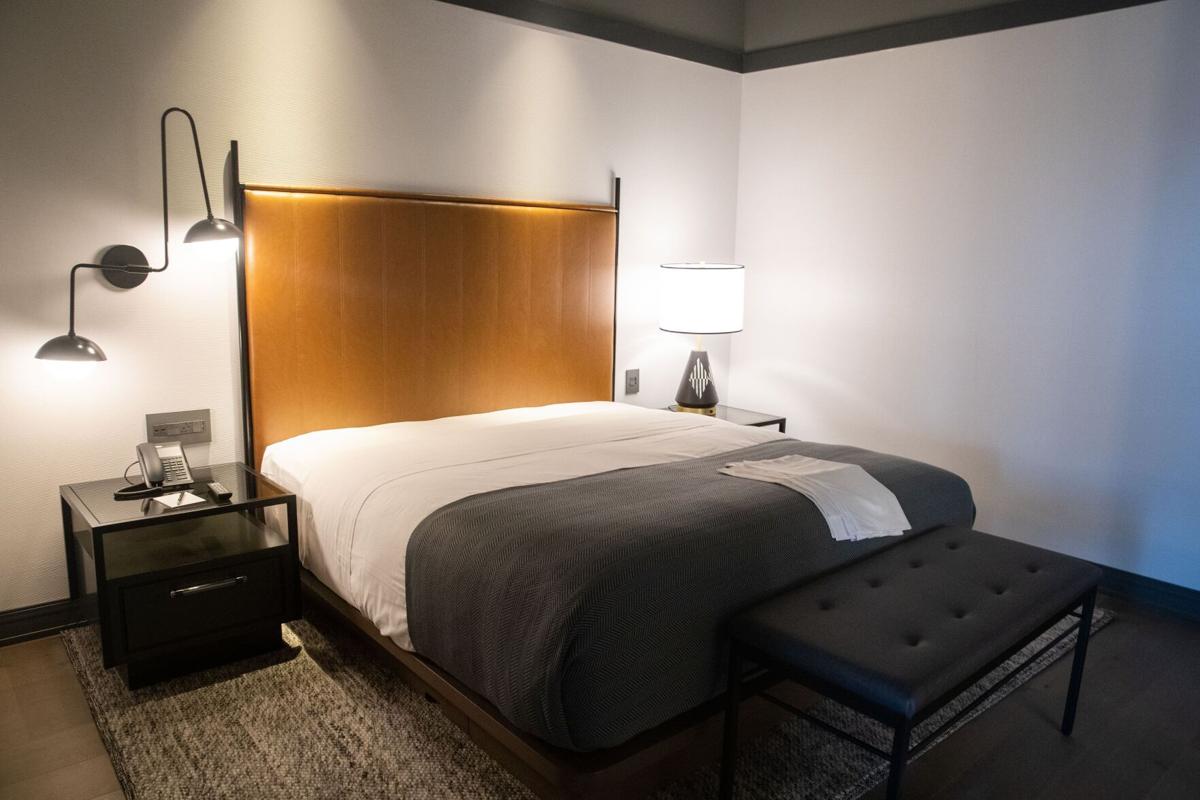 A bedroom inside The Farnam, which has 120 rooms. 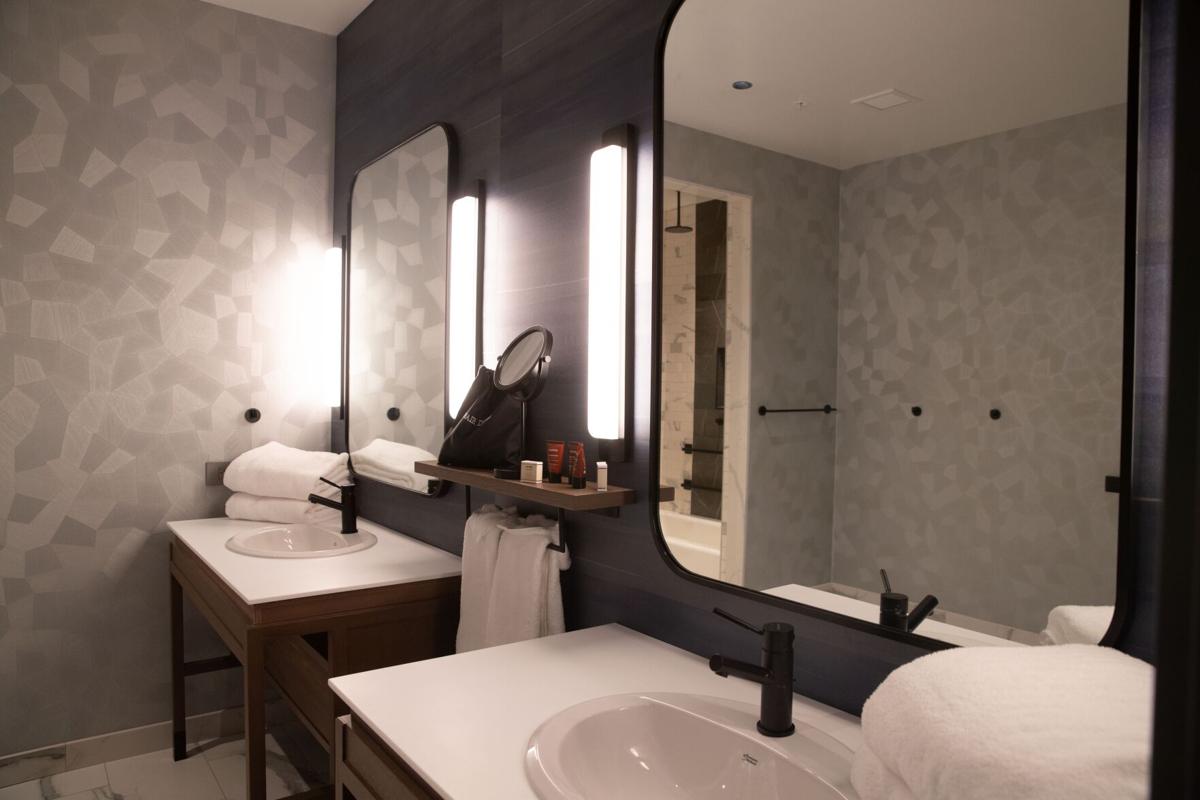 A double vanity bathroom inside a room at The Farnam Hotel on Thursday. 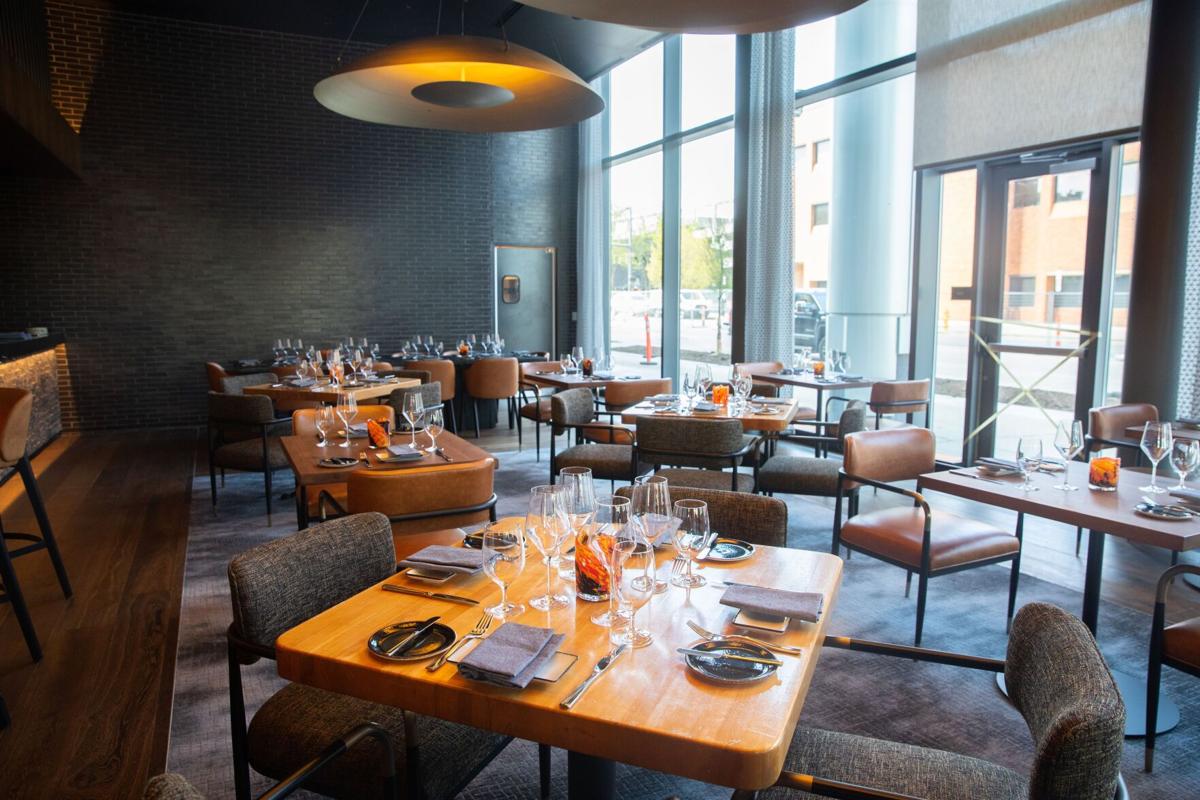 The Farnam Hotel has two restaurants inside, one of which is the Dynamite Woodfire Grill. 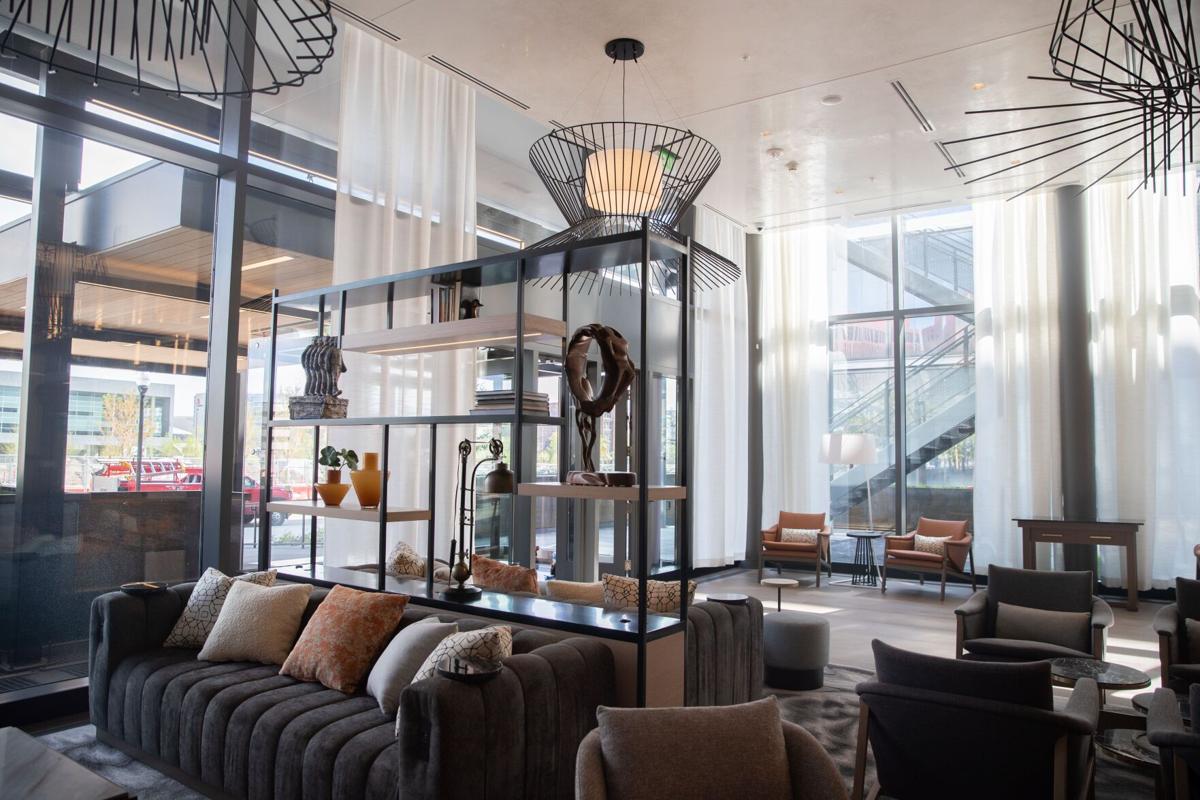 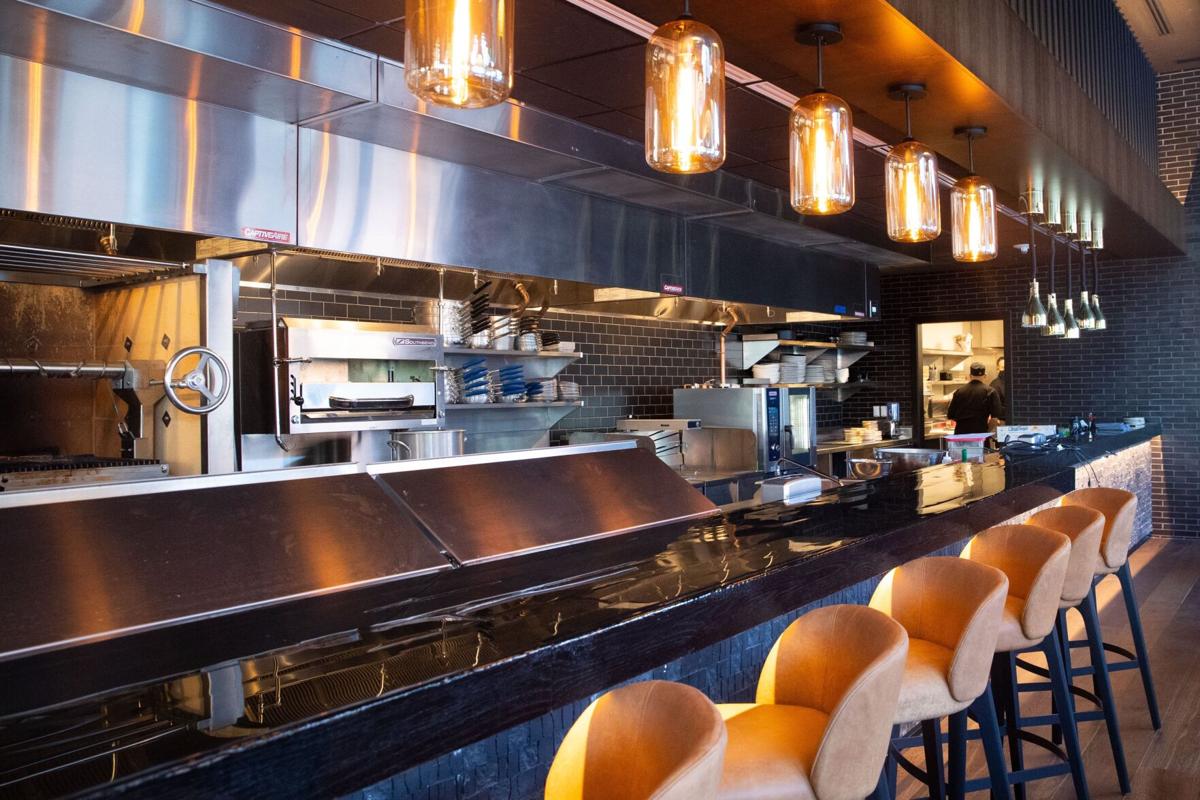 The bar at the Dynamite Woodfire Grill inside The Farnam Hotel on Thursday. 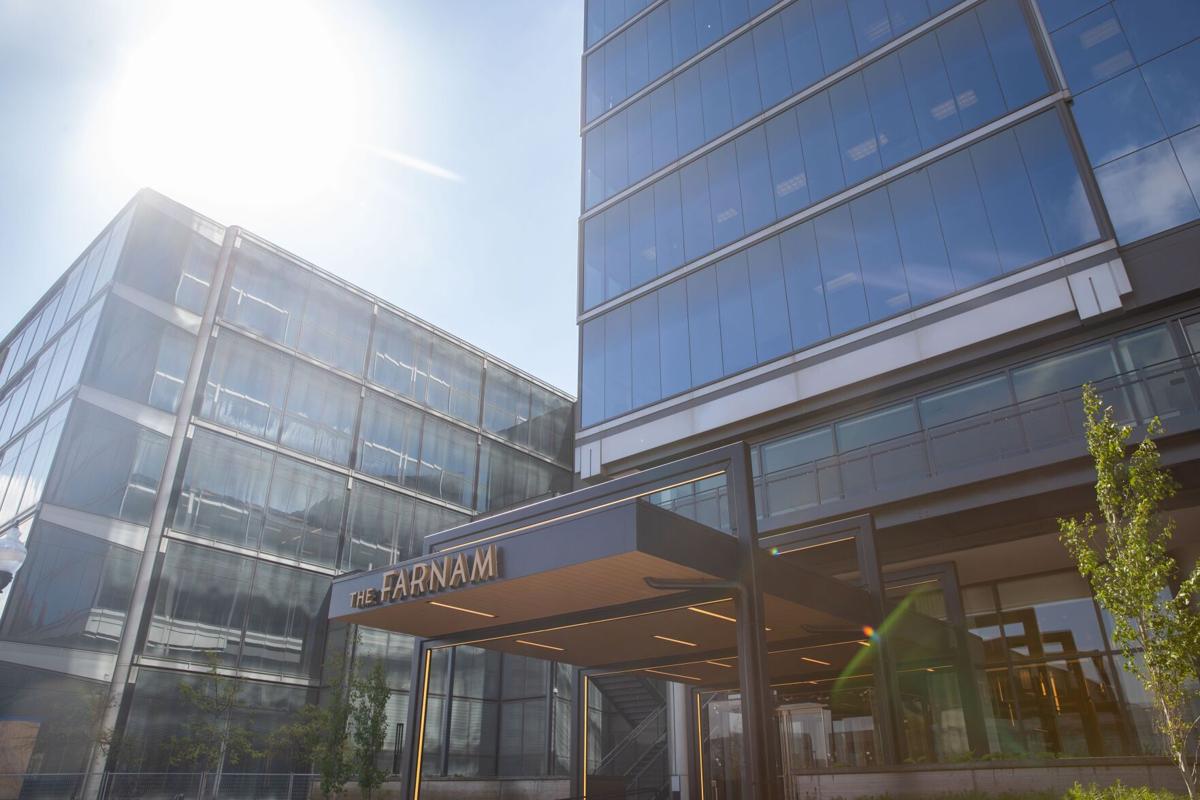 The Farnam Hotel, a 120-room hotel, is set to open on May 20. The hotel is the result of a nearly $77 million project that renovated the 15-story Landmark Center.

On May 20, downtown Omaha will gain a new 120-room luxury hotel and renovated office space along with a modern restaurant and bar right next to the Gene Leahy Mall.

The Farnam is the result of a nearly $77 million project that renovated the 15-story Landmark Center, which stands out for its glassy exterior. The Landmark Center’s offices have been transformed into a mix of hotel and office space that features plenty of natural light and views overlooking the city with floor-to-ceiling windows.

On the ground level, The Farnam’s hotel guests, office employees and the general public will have multiple bar and restaurant options to choose from, including the Dynamite and the Catalyst.

Hotel added to downtown Landmark is named: the Farnam

Named after the influential 19th-century figure Henry Farnam as well as the street on which it sits, the building also includes an attached parking garage that can accommodate 565 cars and retail establishments. The complex is located at 1299 Farnam Street.

Originally scheduled to open in March, construction delays due to the COVID-19 pandemic’s economic effects pushed the completion of the three-year project back a couple of months.

Owners Angie and Jason Fisher indicated the delay may be fortuitous, as The Farnam’s grand opening will coincide with the beginning of summer.

“We’re really poised to open at exactly the right time,” Angie Fisher said. “Everybody is excited to get out and do something new. Some people who may not be quite ready to travel can still experience something like a great vacation in Omaha.”

And a year from now, the Fishers expect The Farnam experience to be enhanced with the opening of the renovated Gene Leahy Mall by Memorial Day in 2022. The building will offer aesthetically pleasing views of the park and should draw in park visitors with small food and drink offerings.

“I think this will be a nice little hot spot for people to just grab and go,” Angie Fisher said.

The Fishers are aiming to bring a mix of local and international flavor via the decor and restaurant offerings. Amid a backdrop of dozens of paintings and sculptures by local artists, restaurant and hotel guests will be able enjoy a mix of dinner entrees in various styles and more than 350 flavors of wine from throughout the world to go along with a diverse selection of alcoholic and non-alcoholic beverages.

Jason Fisher said he and Angie chose every facet of The Farnam’s design in order to show visitors what Omaha has to offer.

“We really wanted something that spoke to Omaha from the standpoint of how when visitors come to Omaha, they’re surprised at how sophisticated it is, how rich the cultural offerings are and how much there is to do,” Jason Fisher said.

While much of the design features contemporary styles, Angie Fisher said the couple also incorporated artistic elements that spoke to Omaha’s railroad history, including Henry Farnam’s lobbying efforts to connect Omaha and Council Bluffs to the world’s first transcontinental railroad in 1869.

“In the absence of that, there really is no Omaha,” Jason Fisher said.

As staff bustled about getting everything in place, Angie Fisher noted the lively and lighthearted atmosphere that hopefully is a preview of things to come.

“We’re really just chomping at the bit to get going,” she said.

Photos: Inside the new Farnam hotel in downtown Omaha

The Omaha advertising agency has been the creative force behind several iconic campaigns, including the milk mustache, "Pork. The other white meat" and Mutual of Omaha's "Wild Kingdom."

Allan Lozier, philanthropist and CEO of Lozier Corp., dies at 87

Allan Lozier, who started working for the company at age 14, had already enacted a succession plan for Lozier Corp., as well as his other businesses.

The acquisition of Little King marks Chip James' first foray into the food business. He said he pursued the deal because he saw value and "hometown love" for the product.

Lincoln Burger King sign goes viral: ‘We all quit. Sorry for the inconvenience’

The joke was to rile Burger King management, said Rachael Flores, former general manager of the location. But the apology and goodbye was to the regulars of the restaurant.

Bart Emanuel of Applied Underwriters, which is the driver and primary owner of the 500-acre Heartwood Preserve, said more than 150 employees have started to move into the Carson Group facility.

Buffett's company is abandoning its purchase of a natural gas pipeline from Dominion Energy because of uncertainty about whether the deal could get regulatory approval.

Amazon projects could bring up to 1,500 jobs to Omaha-Council Bluffs area

Amazon now has two warehouse projects in the Omaha-Council Bluffs area that, between them, could bring as many as 1,500 new jobs to the metro area.

The company purchased 50.56 acres of land off of South 24th Street near the Dallas Johnson Greenhouses in Council Bluffs.

An explosion mural decorates the ceiling of Dynamite Woodfire Grill inside The Farnam.

The south view from a corner bedroom inside The Farnam Hotel on Thursday.

A bedroom inside The Farnam, which has 120 rooms.

A double vanity bathroom inside a room at The Farnam Hotel on Thursday.

The Farnam Hotel has two restaurants inside, one of which is the Dynamite Woodfire Grill.

The bar at the Dynamite Woodfire Grill inside The Farnam Hotel on Thursday.

The Farnam Hotel, a 120-room hotel, is set to open on May 20. The hotel is the result of a nearly $77 million project that renovated the 15-story Landmark Center.