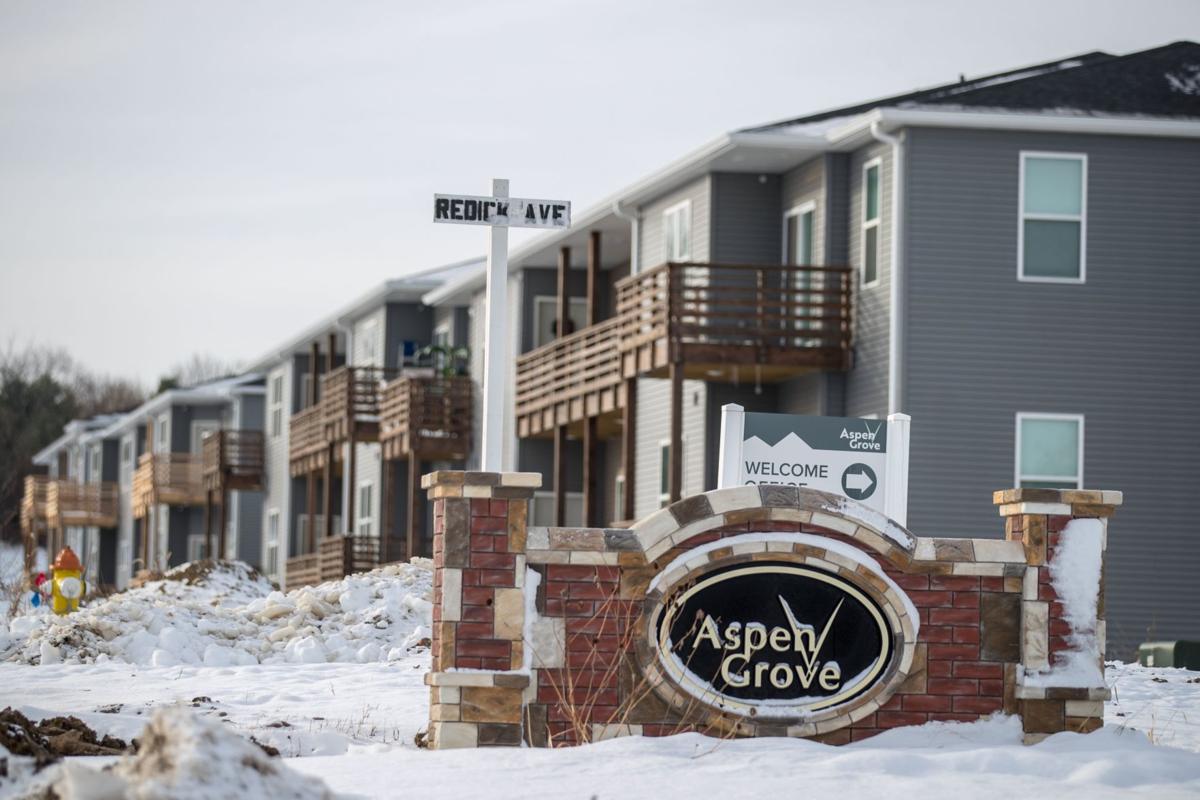 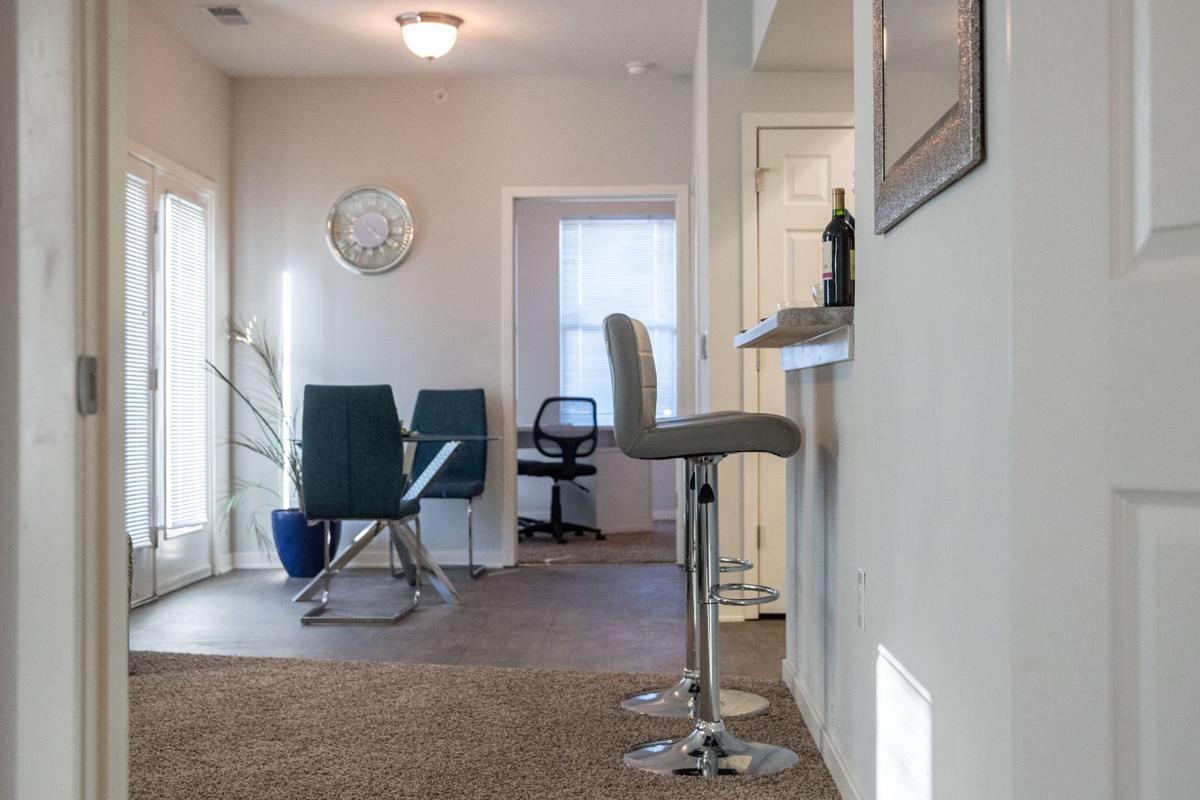 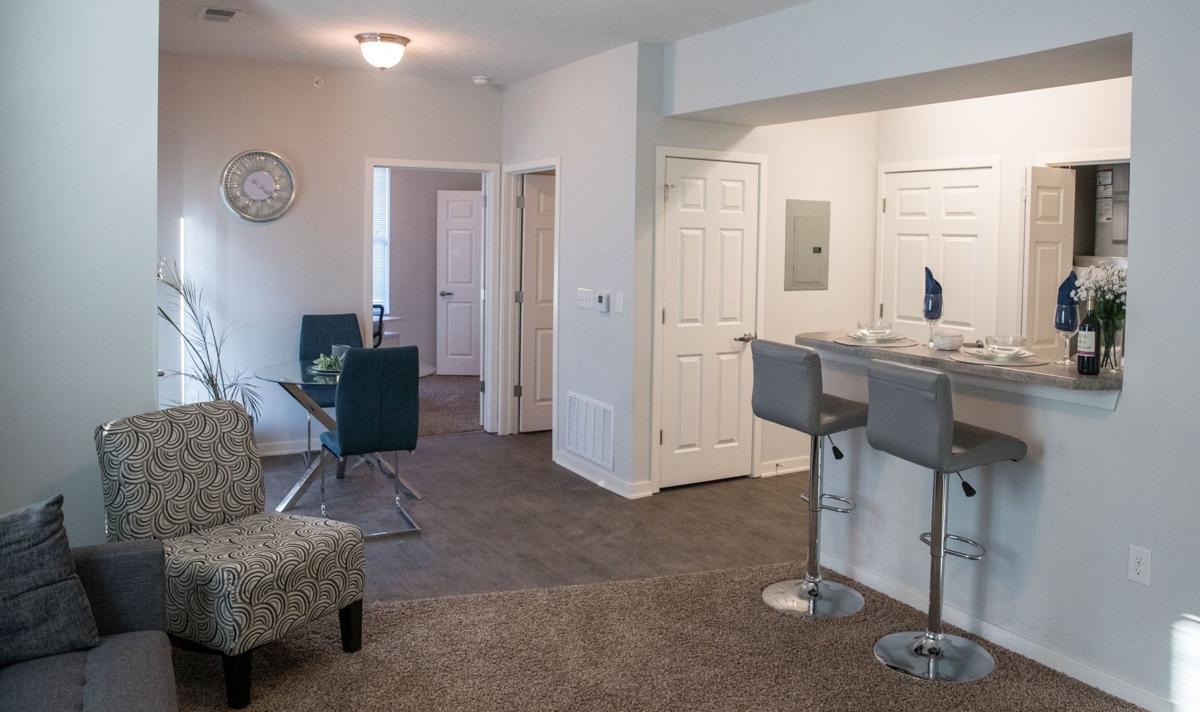 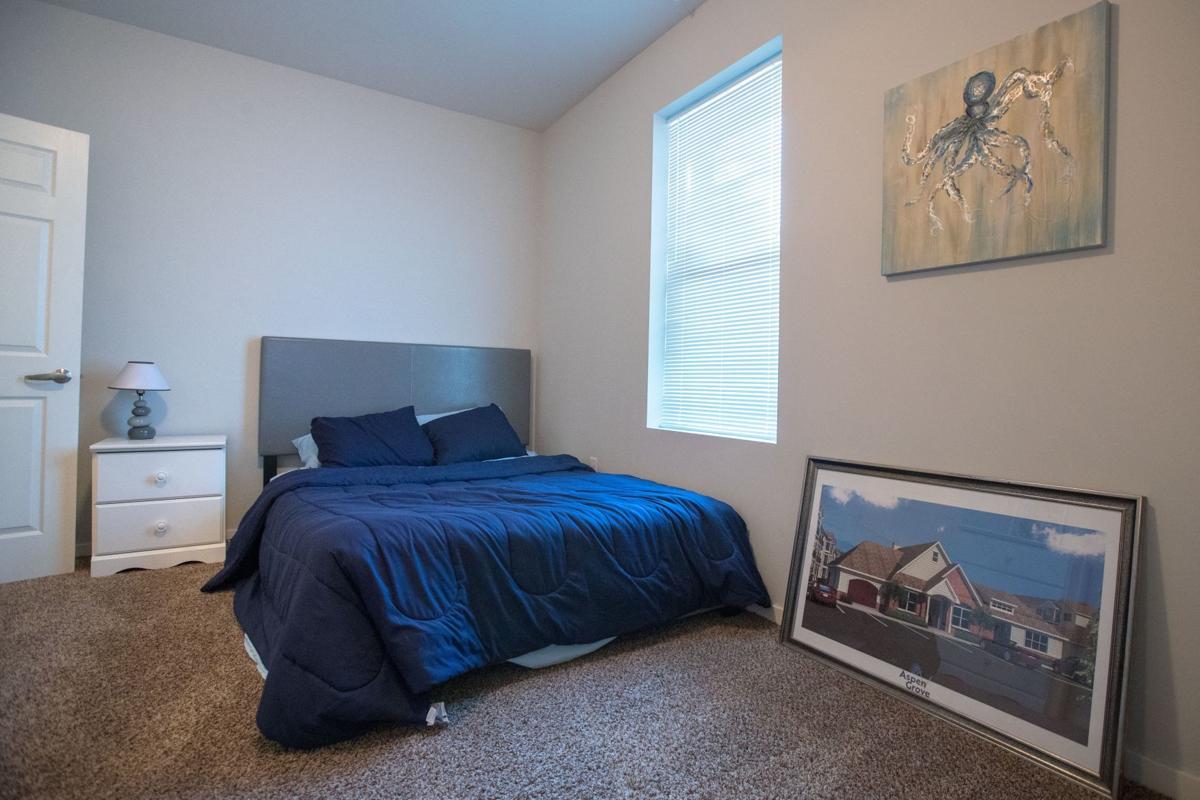 Aspen Grove near Blair. Clarity Development’s Neeraj Agarwal says there is a need to replenish “workforce housing” geared for families supported by such jobs as construction and retail service.

Its newly created housing can be spotted in hip and fast-growing pockets such as midtown Omaha’s Blackstone District, Auto Row near downtown and the 10th Street corridor south of the Old Market.

But Clarity Development’s latest residential project, the freshly built 192-unit Aspen Grove near North 96th Street and Blair High Road, has quickly filled up for reasons other than proximity to the popular urban core.

Clarity partners point to the apartment complex’s relatively affordable rents — they’re capped and reserved for households earning less than 60 percent of the area’s median income — as a top reason people rushed to live at the $30 million complex.

Tom McLeay, who founded Clarity, says the lease-up helps illustrate the unmet demand for quality housing that doesn’t take as big a bite out of a paycheck as the plethora of market-rate apartments rising across Omaha. He joins other local voices in lamenting the dearth of affordable housing options, particularly as business leaders seek to recruit and retain more workers.

“Almost all of these new apartments being built are Class A luxury apartments,” McLeay said. “It’s to the point where they’re unaffordable to a big segment of people who do the work in our community.”

While McLeay was at first pumped about a new state tax credit to boost production of affordable housing, he and some others say the law that took effect in 2018 is not working as they’d hoped. They say policymakers are applying a narrow interpretation — an interpretation questioned by the state senator who pushed the law.

As it plays out, the newly created state housing tax credit is helping to produce additional rental dwellings largely for special needs groups such as the lowest-income, disabled veterans, the elderly.

Former State Sen. Burke Harr of Omaha, who sponsored the original bill, said his primary target, however, was “your working poor, your waiters, bartenders, people who work at Walmart — the Best Buy guy.”

“I think it was a little too complicated,” Harr said, referring to the morass of taxes, bonds and credits to digest. “No one really quite caught on to what we were trying to do.”

It’s not that they want to deny housing for the most distressed groups, said Harr and McLeay. They note that special needs populations, who also pay rent, currently get prioritized in a different, deeper-subsidy low-income housing tax credit program funded by the federal government.

Get the latest development, jobs and retail news, delivered straight to your inbox every day.

Tim Kenny, executive director of the Nebraska Investment Finance Authority — which administers both the long-standing federal low-income tax credit program and, now, its state counterpart — said he’ll continue to use the more narrow interpretation unless told otherwise by the Legislature or Gov. Pete Ricketts.

The Governor’s Office, in a statement, said the program is being managed to keep it in line with the original fiscal note projected during the legislative process, and that a shift would add expense. McLeay disputes that the state would have to incur additional cost, saying it could redirect some state credits to apartment projects aimed at that “Best Buy guy” population.

According to the Nebraska Investment Finance Authority, $5.3 million in state low-income housing tax credits are to be allocated annually. They’re redeemable for six years, leading to a cost of up to $32 million.

McLeay and Harr predict a worsening shortage of quality rental housing for what they call affordable workforce housing.

McLeay, one of few local developers involved in both luxury and low-income apartments, said that today’s rising construction costs have made it financially unmanageable for a for-profit developer such as Clarity to pull off another Aspen Grove-type apartment complex without additional financial incentive or subsidy.

Low-income housing tax credits have become the country’s main engine for production of affordable rental housing since the federal government created the program in 1986. It’s not through a direct government subsidy. Rather, development happens because private investors provide capital for construction of residential projects. In exchange, they get the credits that offset federal income tax liability.

Officials say the federal program, administered in Nebraska by the investment finance authority, took a hit after the federal tax code overhaul lowered corporate tax rates and made participation less valuable to investors.

That made the new state housing tax credit an even more important tool to nudge production of more affordable housing. Working with the finance authority, state officials created regulations that essentially mirror the federal 9 percent allocation program that gives ranking preference to projects targeting the area’s most distressed low-income populations, such as disabled veterans and the elderly.

Under that competitive 9 percent program, in the past five years about 1,800 units have been created across Nebraska, according to the finance authority.

Aspen Grove, on the other hand, qualified for a lesser-known and lesser-subsidy 4 percent federal tax credit program used more for housing workers on a higher end of the low-income scale. The finance authority says that about 900 affordable units, all in Omaha, have been built or rehabbed under that federal program in the past five years.

Kenny said those 4 percent projects don’t qualify for the state’s credit under the law, as interpreted by state policymakers.

That concerns Clarity’s Neeraj Agarwal, who says there is a need to replenish “workforce housing” geared for families supported by such jobs as construction, retail service and teaching. He said state housing credits could provide “gap financing” that give 4 percent deals access to a larger pot of federal funds to leverage more units.

Matthew Cavanaugh, director of the nonprofit Nebraska Housing Developers Association, said Nebraska developers do not access those related federal credits for 4 percent deals near as much as some other states.

He said the state should invest more, overall, to further expand affordable housing.

“We’re not meeting the needs of the lowest-income or the working poor or the emerging workforce in terms of housing,” he said.

David Levy, an Omaha attorney who chairs the Omaha Housing Authority, said he’d also like to see the state expand its affordable housing tax credit to projects aimed at the working poor, but not take away from another program.

“One of the things urban and rural senators still agree on in this state is that the lack of workforce housing is hurting our ability to grow our economy and tax base,” Levy said. “It’s a very real problem.”

With the state forgoing tax revenue related to the housing credits, he said the question becomes: Where does Nebraska believe it gets the “biggest bang for the buck”?

At Aspen Grove, Clarity has attracted households such as the Carlsons. Nikoles, a cabinet builder, moved to the 12-acre campus with his wife, Rebecca, who works for a day care provider, and their toddler son, Noah.

The young family had been staying with a relative while searching for a place with two bedrooms in their price range. The homes they’d seen were either too far from work and family, unfit or worn down.

Carlson said his family got in on a special deal offering about a $50 discount on what otherwise would be $850 monthly rent. They’re now thinking of upgrading to a three-bedroom unit.

“We were like, ‘This is perfect. It’s got room for our son to play, really nice for the price.’ ”

A swimming pool is under construction; a playground is on the way. Interstate access is near, so are retailers.

Agarwal said roughly 30 percent of construction costs were covered by the sale of 4 percent federal tax credits Aspen Grove was allocated years ago. In exchange, Clarity Development sets rents according to certain federal government guidelines. At Aspen Grove, that’s $685 for a one-bedroom unit; $985 for a three-bedroom unit.

To live there, tenants can’t earn more than 60 percent of the area median income. For a family of four, that translates to about $45,000.

The Clarity group has helped put together other deals that tapped 4 percent federal low-income housing tax credits, including the 110-unit 30 Metro apartments that opened last year at North 30th and Fort Streets and is full, in part with tenants who work and attend the nearby Metropolitan Community College.

Kenny said 19 states have adopted a state housing tax credit to address their needs, and can tailor their laws to boost construction for groups they feel need help most, be that the working poor, nonviolent offenders or other populations.

“It’s a tool, just like a hammer and nail, that helps you solve housing problems,” Kenny said.

“There is a big need out there,” Agarwal said. “Creating a solution for a problem is appealing to us.”

Best of the weekend: The Gene Leahy Mall is nearly dry; Omaha's 38 essential restaurants — and 6 other can't-miss stories

The build-it-and-they-will-come office project is seen as a sign of optimism in downtown job growth.

The family-owned real estate development company has carved out 2,007 apartments from eight aging overlooked structures in just the last six years. But the Woodbine, Iowa-based company has been creating housing since the 1980s.

Omaha apartment developer plans a pause so jobs can catch up

Though NuStyle still enjoys high occupancy rates at its urban apartment projects, co-owner Todd Heistand has sounded an alarm regarding the downtown market.

An eight-story apartment building proposed for Omaha’s Dundee area would add a few hundred more housing units and further change the face of a midtown stretch of busy Dodge Street.

Central City gets top honor. Omaha, Lincoln, Bellevue and Grand Island also chose companies and people who have worked to better their cities.

Flooding and prolonged winter conditions pushed back Omaha's usual house-hunting start and has compressed the sales season. Add to that the continuing tight inventory of homes, and sellers can expect bidding wars — and personal pleas.

The credit, which took effect in 2018, has fallen short of lawmakers' aims.

Restaurant owner Nick Triantafillou says a new taller building next door is blocking views of his signature gorilla sign and it's costing him business. He's seeking permission to move his sign to a more visible location while also considering a proposal to erect a bigger sign.

The study comes at a critical time. The historic flooding in March damaged two Bellevue communities that were important sources of affordable housing: Paradise Lakes and Green Acres. 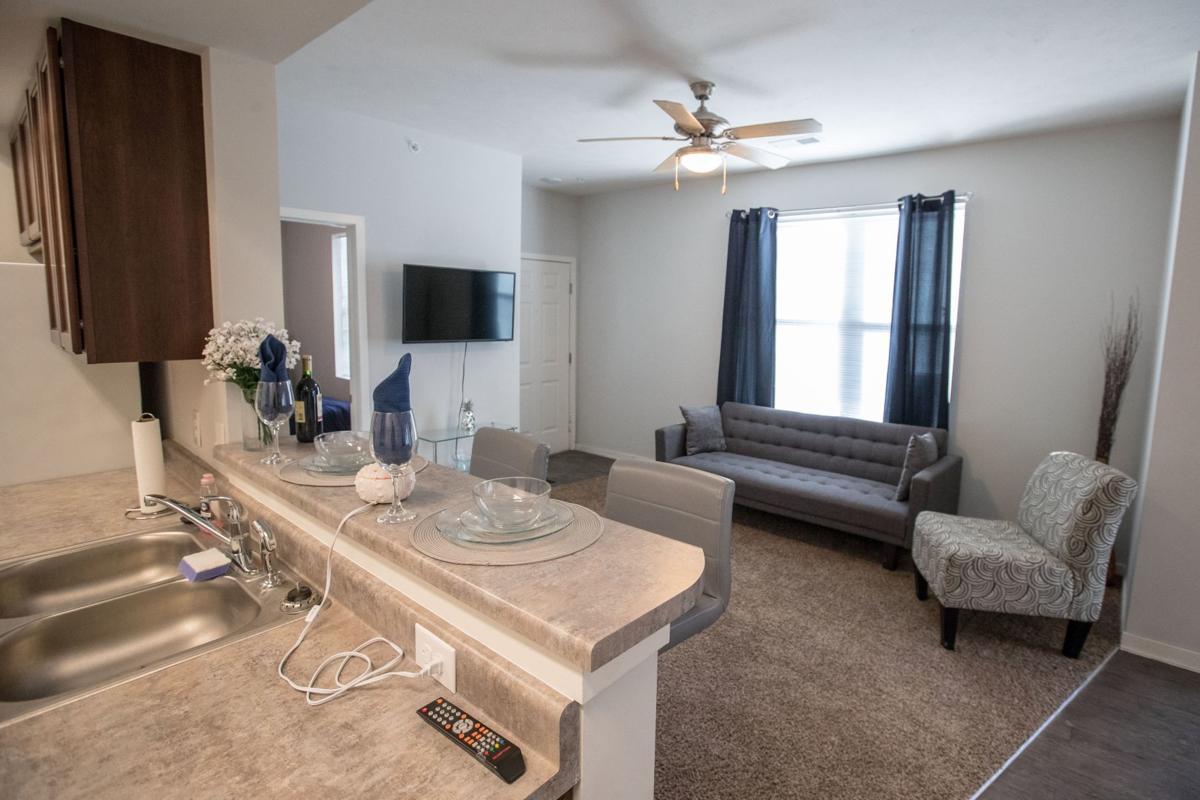 Aspen Grove near Blair. Clarity Development’s Neeraj Agarwal says there is a need to replenish “workforce housing” geared for families supported by such jobs as construction and retail service. 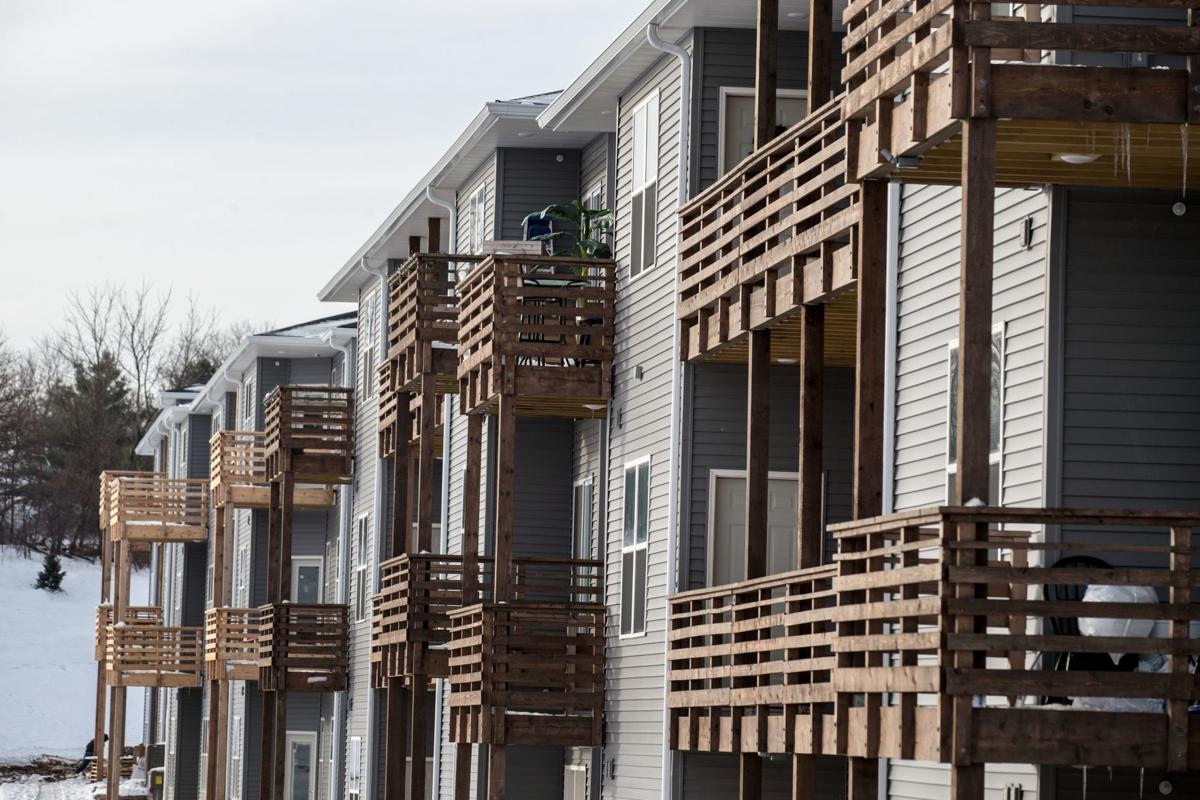