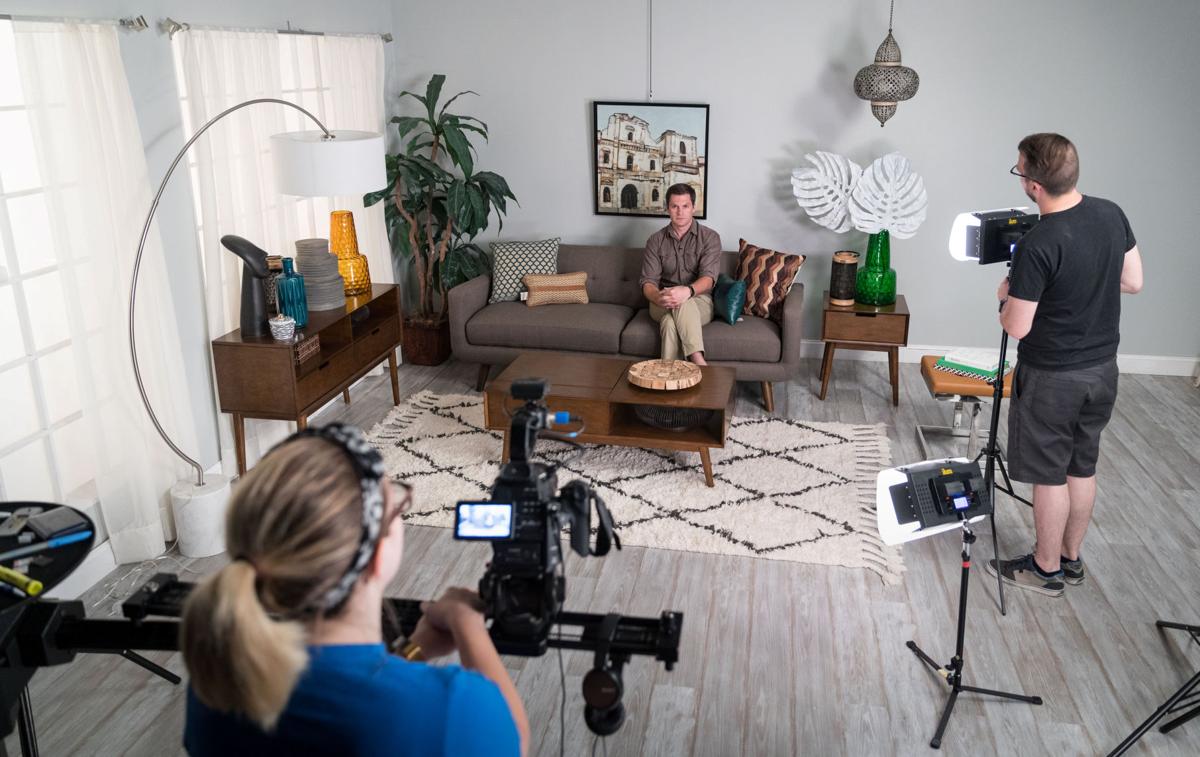 Evan Korf, right, video production supervisor, and videographer Chelsea Nielsen light a shot of Mark Booker, an on-camera talent who often works with Hayneedle. The group was shooting in the Hayneedle studio in Omaha, Nebraska. 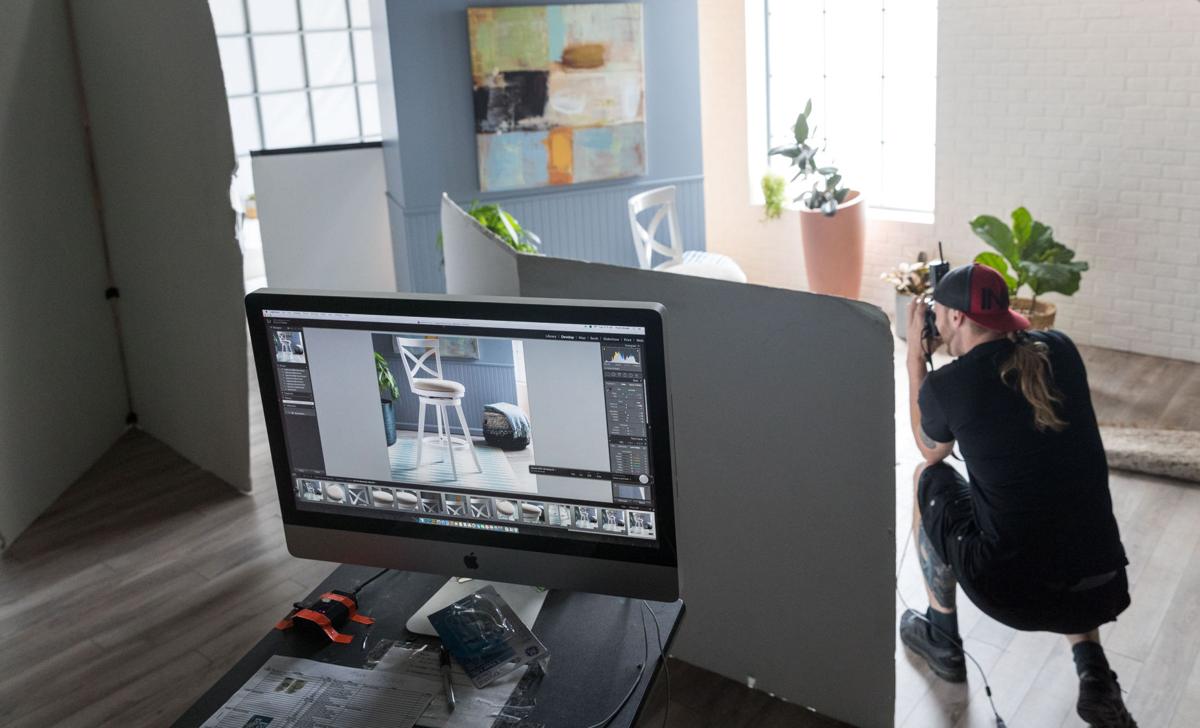 Photographer Jesse Cleasby, right, works on shots of a chair in the Hayneedle studio in Omaha, Nebraska. 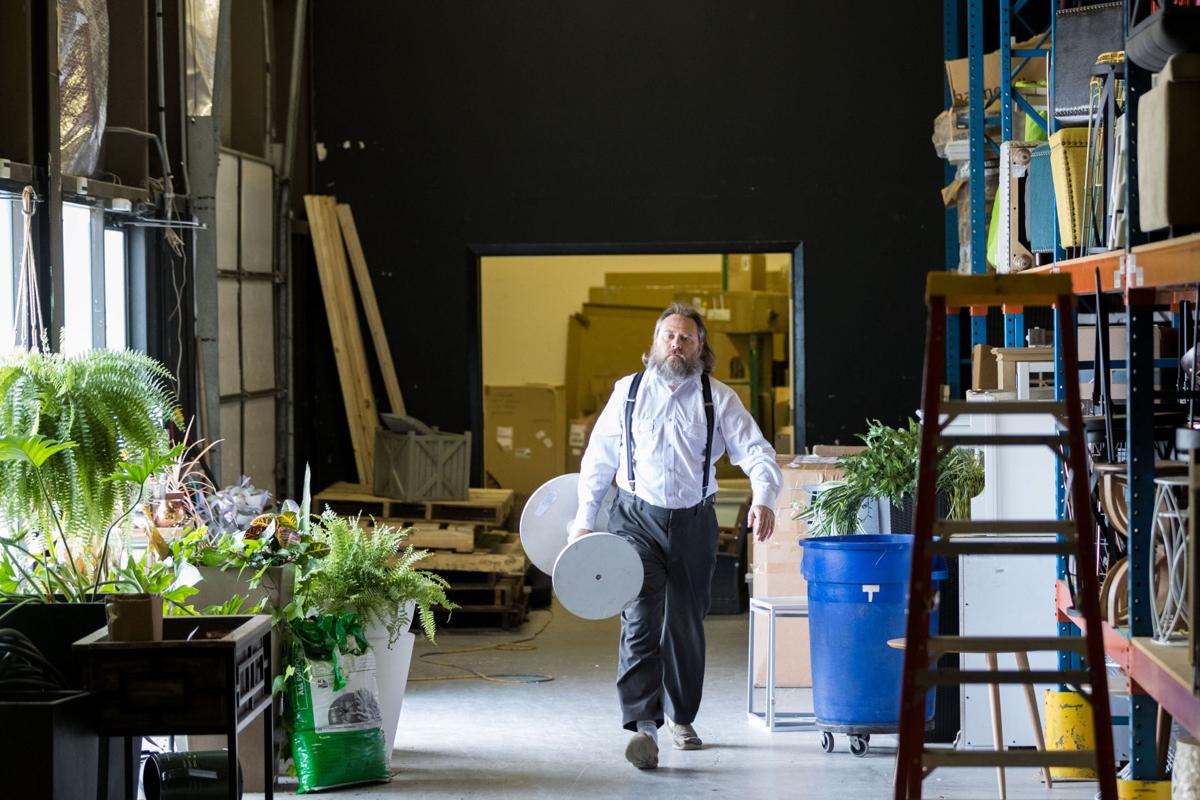 Photo studio assistant Edward Spencer get a prop in the Hayneedle studio in Omaha, Nebraska. Live plants are kept in the light and used in the photos because they add a realistic touch. 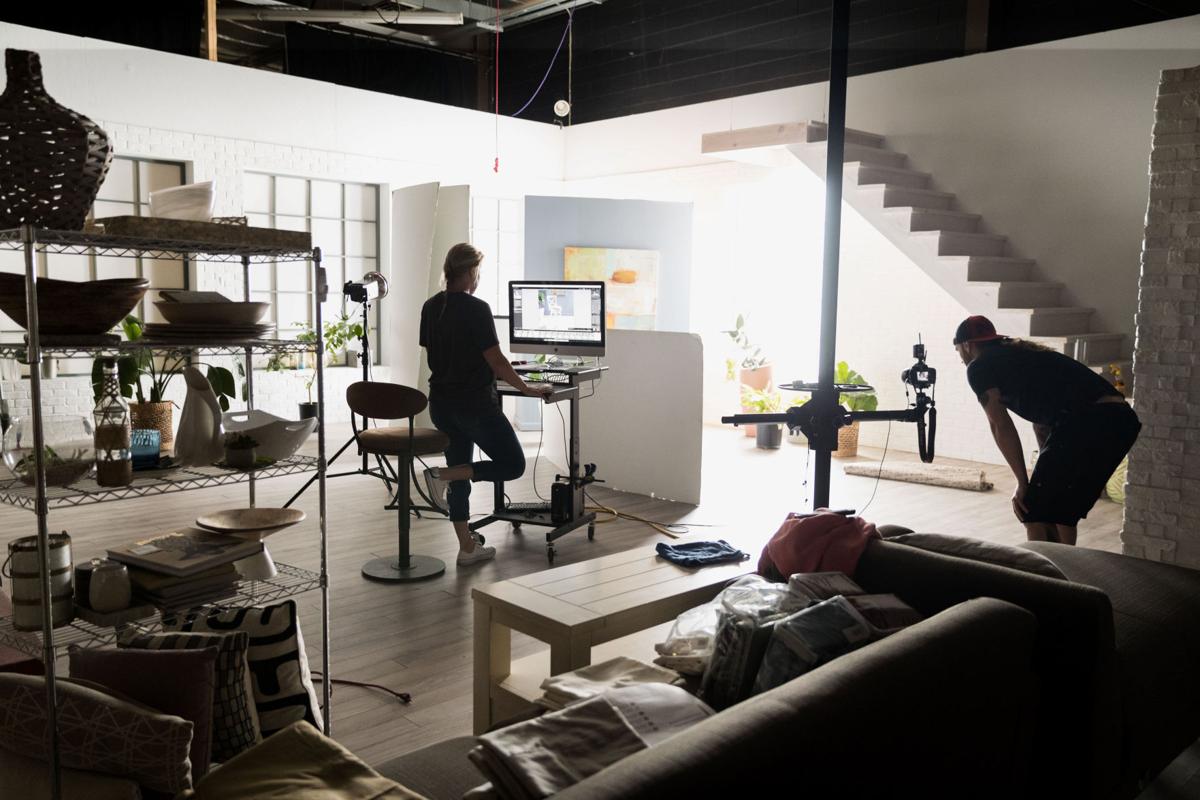 Photographer Jesse Cleasby, right, and photo assistant Kelsey Anderson work on shots of a chair in the Hayneedle studio.

Since it was conceived 15 years ago as a website for selling hammocks, Hayneedle has relied strictly on digital marketing to bring in customers.

Web shoppers searching for hammocks on Google, for instance, had to click through search results to land on the Omaha-based e-commerce retailer’s website. It kept the same approach after expanding to a wide assortment of furniture and decor.

Things have changed significantly since those early days, and the online home furnishings company that had sales of about $500 million in 2016 today finds itself owned by Walmart. Now it’s trying a new marketing tack: Hayneedle on May 30 launched its first-ever national advertising campaign on media including cable and network TV and digital radio.

Ad spots of 15, 30 and 60 seconds are airing on channels like ABC, NBC, Fox, HGTV and Bravo. And instead of predicating a message based on value — as it has for years through digital channels — Hayneedle is making an emotional appeal to potential customers.

“When you look at how our core competitors are advertising through TV and other brand-building channels, it’s very value-based,” said Jeremy Podliska, the company’s vice president of marketing. “We saw an opportunity to present the brand in a way that is hopefully more emotionally relevant to customers.”

Ad agency VSA Partners is behind the campaign that opens with shots of empty streets, offices, restaurants and stores before cutting to lively family and social settings inside people’s homes.

The Chicago-based agency counts among its clients Facebook and First Data, the Omaha-born payments technology company. It’s also got a history with brand behemoths like Budweiser, Harley-Davidson and McDonald’s. Podliska declined to say how much Hayneedle has spent on the campaign.

The goal of the campaign is to connect with homemakers — Hayneedle’s “primary customer” is female, between 36 and 55 years of age, and married with children living at home. The ads aim to introduce the Omaha company’s brand as one that can be a “resource” as well as an “inspiration” for people outfitting their homes, Podliska said.

Doing so requires somewhat of a different approach than that of parent company Walmart, which generally appeals to lower-income households through its network of nearly 4,700 physical stores.

But the world’s largest retailer has poured billions of dollars into beefing up its e-commerce business to try to steal share from Amazon, which accounted for 43 percent of all online sales in the U.S. in 2016, says market research from Slice Intelligence.

It has much ground to make up: A March research note from retail industry analyst John Brick of Morningstar noted Amazon’s $120 billion in annual sales, all online, compared with Walmart’s $16 billion in online sales.

Walmart is trying to play online catch-up, though — and in a hurry: The company paid $3.3 billion for New Jersey-based Jet.com in September 2016. Jet.com bought Hayneedle for $90 million in February 2016.

And Walmart isn’t done yet. Earlier this spring the company was widely rumored to be in talks to acquire online men’s clothing startup Bonobos. (Neither company would comment in media reports on a possible tie-up.)

Wall Street analysts have been intrigued by the bolt-on purchases of existing businesses.

“When you pair a Hayneedle with Bonobos and you get a greater merchandise mix ... they’re trying to target a different demographic from their core low-income households,” said Morningstar’s Brick.

While bringing on new product offerings like those in Hayneedle’s inventory achieves that, it also gives acquired companies an opportunity to take advantage of Walmart’s expansive distribution network, which can help lower costs, Brick said.

Back in Omaha, the focus is still fixed on building awareness of the brand.

“I think it’s actually a brilliant move,” he said. “At the end of the day, if all you’re doing is focusing on your products or service features, there’s nothing to move anybody to make them feel anything about it.”

When you stop and think about successful advertising campaigns, Moore said, they all rely on emotion to some extent — and that doesn’t just mean emotions that give you “warm feelies.”

“I’ve used emotion to sell hand tools,” he said. “(Emotion) can be humor, it can be confidence, it can be all these different things.”

Women are dropping out  the of workforce — but why?

Higher day care costs and an overall lack of jobs and gender pay gap have all factored into the decline in women in the workforce.

Q&A: What leaving the Paris climate deal means for businesses

The impact of President Donald Trump’s decision to withdraw from the Paris climate agreement will differ for companies depending on what they produce and whether they have sales overseas.

QVC and Home Shopping Network, long known as bases for home shopping on TV, are combining further as they look at aggressive growth by Amazon and consumer buying shifting even more online.

Former Yahoo executive will lead Hayneedle through expansion of its brand

Scott Doughman, who most recently was vice president of global partnerships at Yahoo, is now the web-based home furnishings retailer’s president.

Evan Korf, right, video production supervisor, and videographer Chelsea Nielsen light a shot of Mark Booker, an on-camera talent who often works with Hayneedle. The group was shooting in the Hayneedle studio in Omaha, Nebraska.

Photographer Jesse Cleasby, right, works on shots of a chair in the Hayneedle studio in Omaha, Nebraska.

Photo studio assistant Edward Spencer get a prop in the Hayneedle studio in Omaha, Nebraska. Live plants are kept in the light and used in the photos because they add a realistic touch.

Photographer Jesse Cleasby, right, and photo assistant Kelsey Anderson work on shots of a chair in the Hayneedle studio.