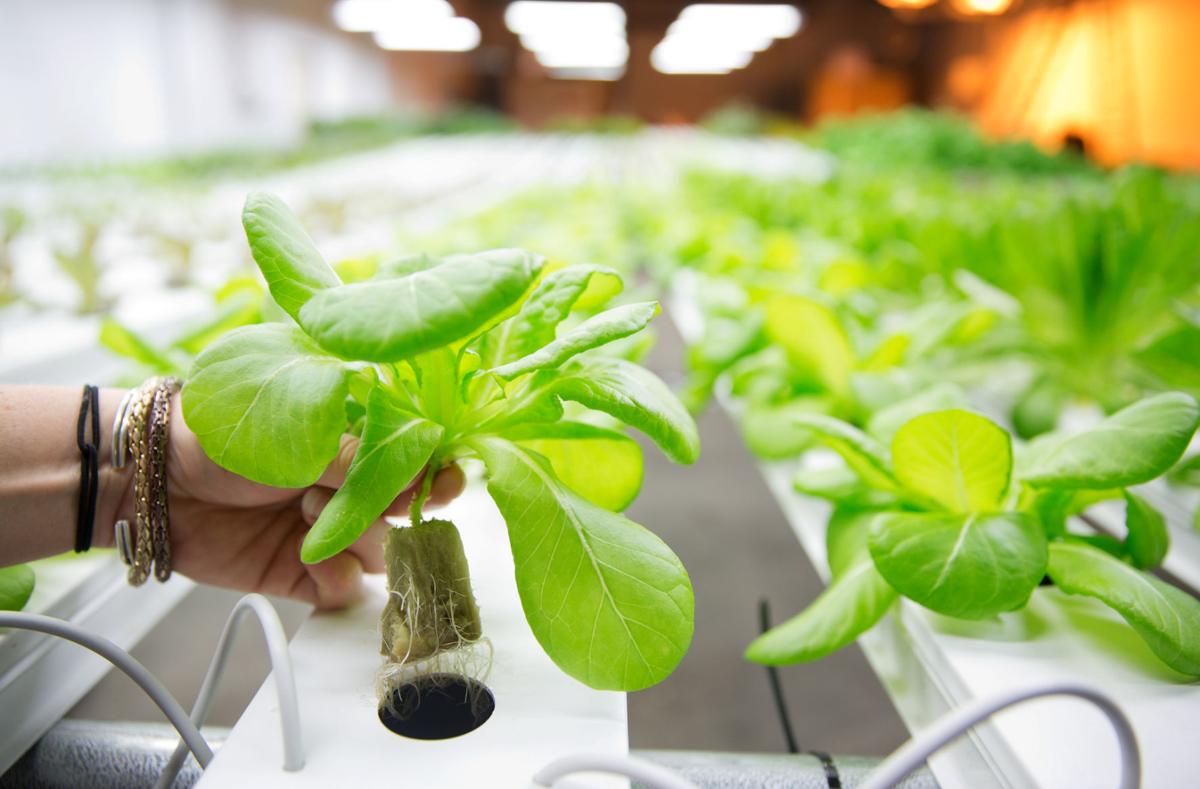 The roots of this lettuce plant grow through a cube of rock wool at Peterson Greens at their warehouse in downtown Omaha. 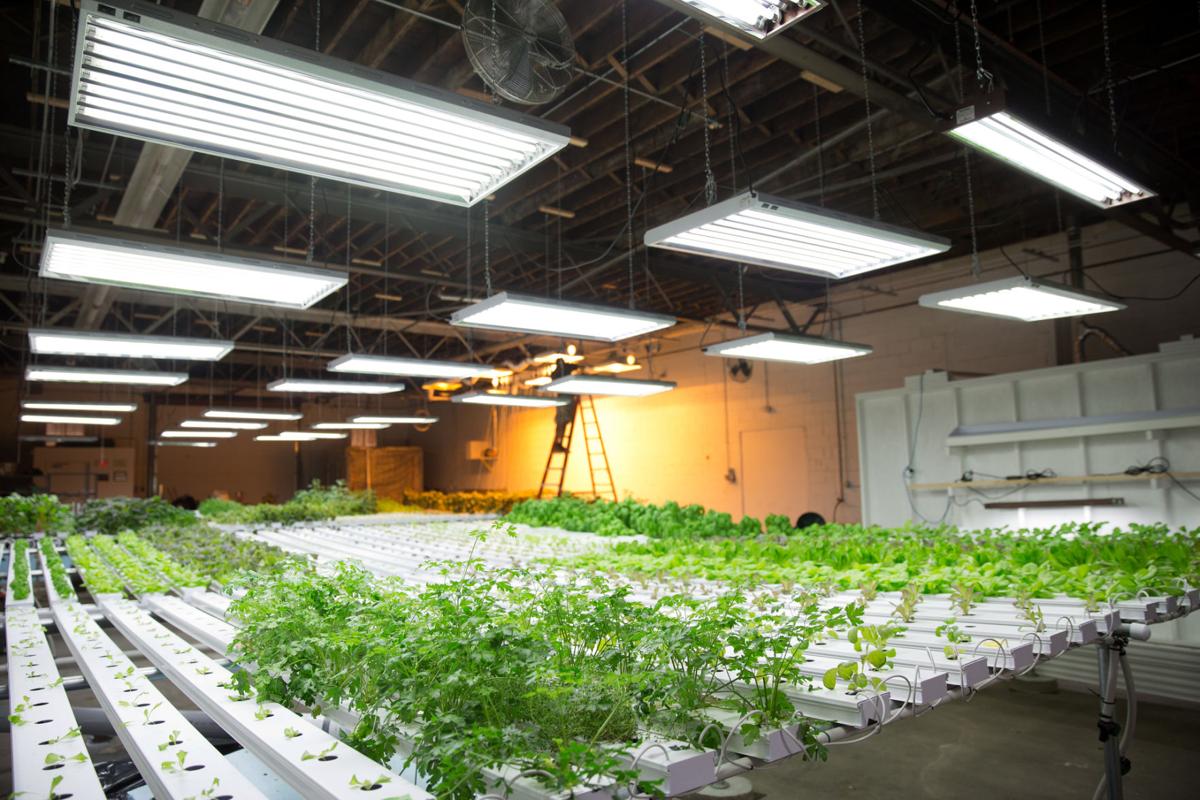 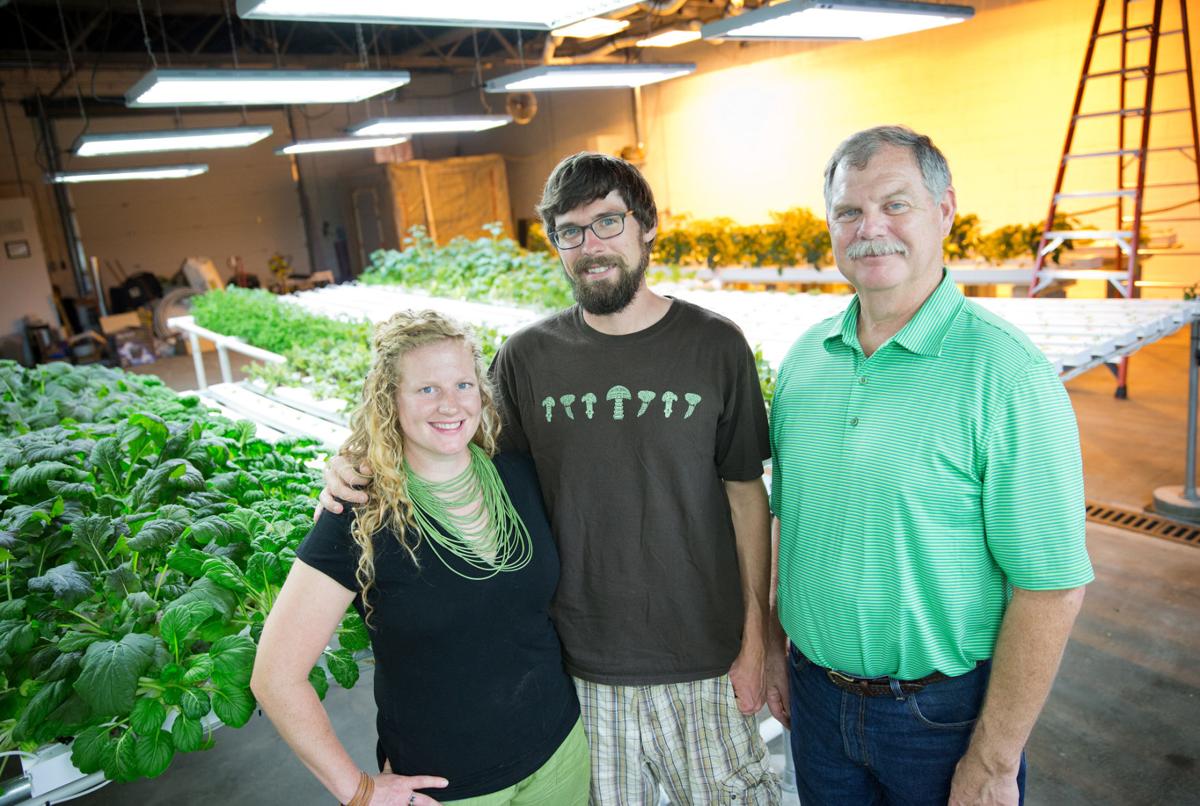 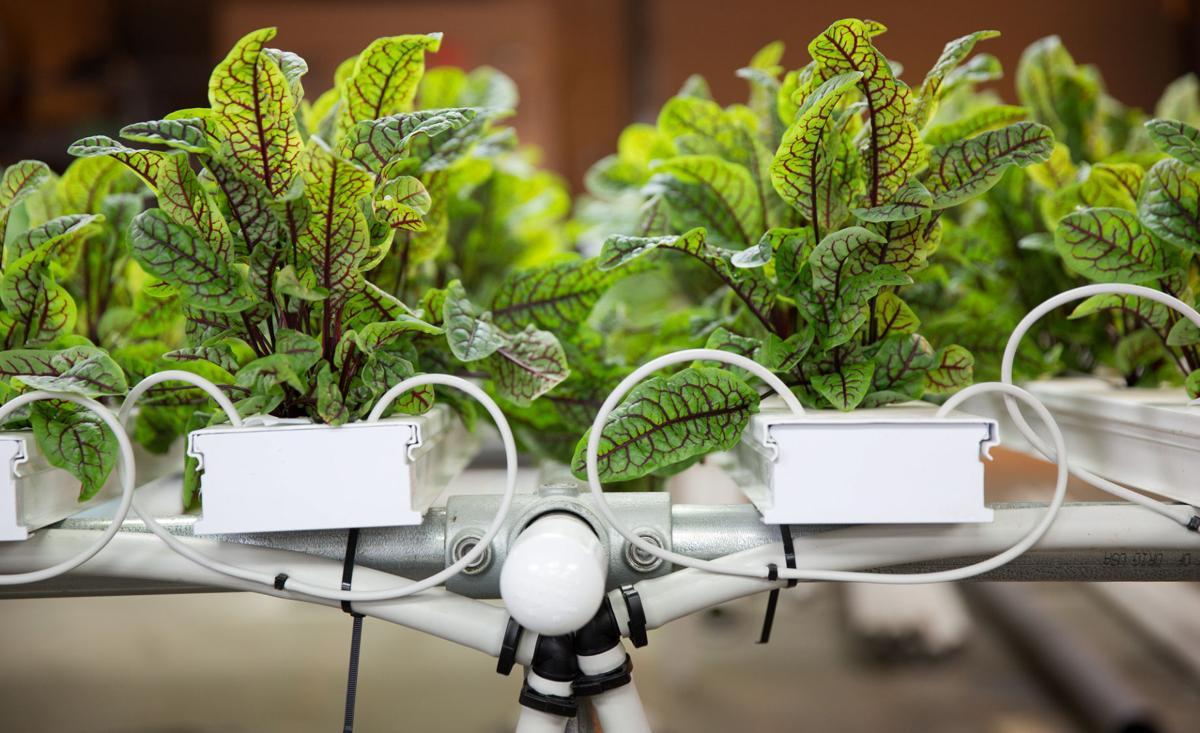 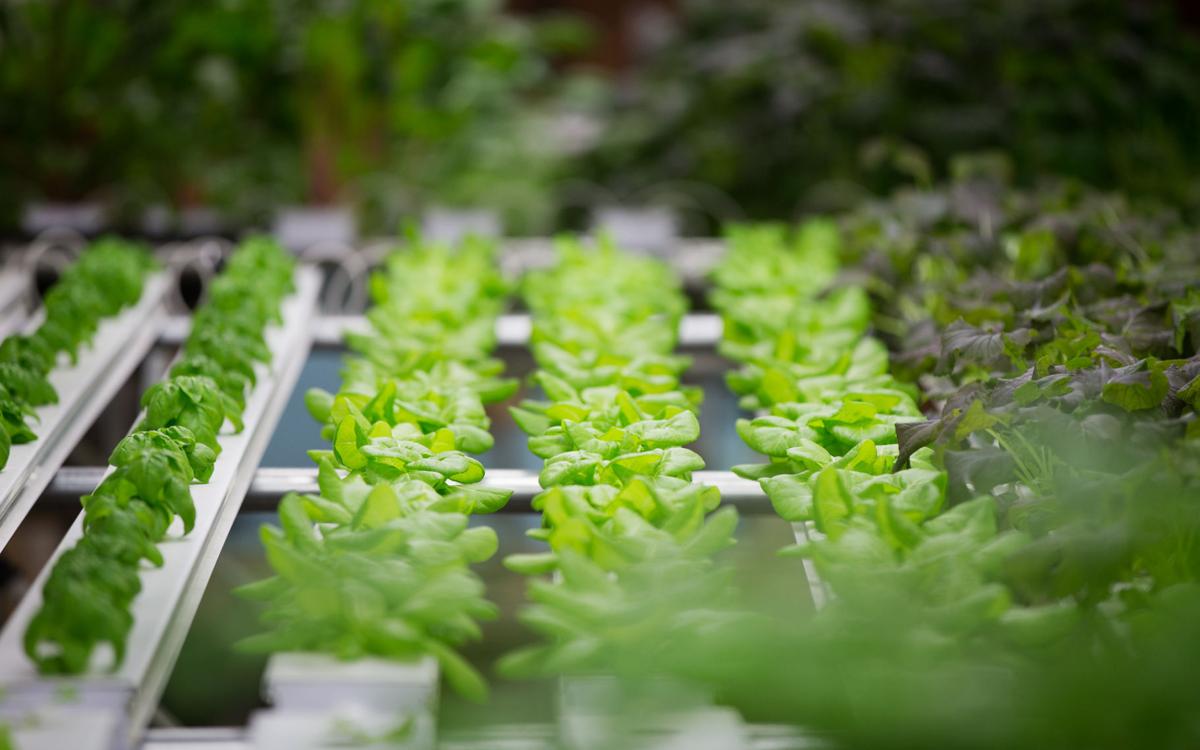 What started as a basement experiment is growing — literally — into something more in a downtown Omaha warehouse.

Inside the nondescript building at Seventh and Pacific Streets is a garden that is absent of soil and sunshine. Instead, vegetables sprout in small cubes of mineral wool placed in trays of water, with water-soluble fertilizer helping them grow. Sprouting in the facility are mostly greens, such as Swiss chard, butter lettuce and kale. There also are herbs and several rows of peppers.

Water for the plants flows continuously through tubes into the trays and is recycled. Different kinds of lights, depending on the plants’ needs, hang from the ceiling, taking the sun’s place.

Hydroponics is a method of growing plants using water infused with mineral nutrient solutions. It doesn’t use soil and it isn’t always practiced indoors.

Kristen Peterson and her husband, Ian Peterson, and Ian’s parents, Tom and Patti Peterson, started gardens in their basements about a year and a half ago, experimenting with different systems and what to grow. Soon after, they leased the space at 817 S. Seventh St., “an empty box” that once housed an auto shop.

“Instead of just diving in, we figured we should get our feet wet first,” Tom Peterson said of the early basement gardens.

The Petersons planted the first vegetables and herbs at the new facility in February. The plants have a four- to six-week growing cycle. The operation has begun selling to local restaurants, including Kitchen Table, the Grey Plume and Boiler Room. The family also is exploring selling some of its produce at the year-round indoor farmers market Tomato Tomäto near 156th Street and West Center Road.

“Given our size, we can’t produce for a chain or anything,” Tom Peterson said. “We’d like to stay wholesale, but if we can get this going and expand ... we’ll see where it goes from there.”

The business has not yet recovered its startup costs, Tom Peterson said, and the facility will be “a long-term investment.” Outfitting the leased space, including adding some bathrooms to meet code, cost tens of thousands of dollars, he said.

“We’re just trying to break in and get people to know us and our product,” he said.

Restaurants say the produce is clean, fresh and, more important, it will be available year-round, regardless of season.

“We go without (greens) for the winter, so we do vegetable salads and things like that,” said Clayton Chapman, owner and chef at the Grey Plume in Midtown Crossing. “It’s a great benefit for us and we’re excited to be able to pass that on to guests.”

So far, the restaurant has purchased various fresh herbs, butter lettuces and some Swiss chard. The growing method allows for a restaurant to purchase clippings from a plant or the entire thing, extending the shelf life.

“The time in which the greens are harvested, from harvest to our door ... I mean, it’s within hours,” Chapman said.

Chapman said prices by the pound and plant are competitive with other producers. A pound of basil, for example, can run between $9 and $10, he said. Herbs that take longer to grow, such as thyme, typically cost more.

Prices vary based on what’s in season. Greens, for example, are in season now, but prices will go up in the winter, Tom Peterson said, although he declined to give exact figures. Customers who buy larger quantities also pay less per pound.

The operation is not considered organic because it uses synthetic fertilizer and doesn’t contribute anything back to the soil. However, the plants don’t require pesticides because of the controlled, pest-free environment, and hydroponic systems typically use 70 to 90 percent less water than conventional gardens.

But unlike a greenhouse, the operation faces high energy costs to keep the building’s temperature just so.

“We don’t have to worry about hail, but our heating and cooling bill is higher than a greenhouse,” Tom Peterson said.

The idea for Peterson Greens came to Ian Peterson when he returned to Omaha after graduating from Iowa State University with a degree in plant biology.

With Kristen Peterson’s horticulture experience — the couple met working at Lauritzen Gardens — and Tom Peterson’s background in agriculture and business, the right set of skills came together to make Peterson Greens a reality.

None of the Petersons have joined the operation full time — at least not yet. Ian Peterson recently enrolled at the University of Nebraska at Omaha to attain a secondary education science teaching certificate. Kristen Peterson still works at Lauritzen Gardens as a senior gardener, and Tom Peterson is a financial consultant.

“Needless to say, we have a big garden at home. So does Tom,” Kristen Peterson said. On a tour of the facility last week, the couple had just enjoyed a sandwich of hummus and assorted greens grown in their downtown facility.

“You’ve got to know what you’re selling,” Ian Peterson said.

“The benefits are you can grow anywhere. You can grow in an abandoned building,” said Connie Fisk, urban agriculture program coordinator with the University of Nebraska-Lincoln. “The downside is it takes a lot of control. If the power goes out over the weekend, everything could die.”

And even though the produce is local, that doesn’t necessarily mean the operations are sustainable or better for the environment.

“It’s great to think about growing food locally so we don’t have to pay to ship it from California, but when you think about the energy costs required to run this kind of system, it’s a wash,” Fisk said.

Another downside: What can be grown hydroponically is limited. Herbs and greens do best, but root vegetables like carrots and potatoes are out.

A waiver to allow the Petersons to use the downtown building for crop production was unanimously approved by the Omaha Zoning Board in 2014.

“The city is recognizing things are changing. New York has rooftop greenhouses,” Tom Peterson said. “It’s a growing trend, but it’s like most things, it gets here last.”

Most hydroponic operations are on the coasts. Nebraska is home to less than 1 percent of industry establishments, according to a report by market-research firm IBIS World. Large producers are predominantly based in California, Texas, Arizona and Nevada, but most hydroponic farms are small and owner-operated. New York, for example, doesn’t have any major commercial growers but is home to about 7 percent of total establishments

Revenue from hydroponic crop farming is anticipated to grow 2.1 percent this year to $554.5 million, according to the report.

Kitchen Table, a downtown Omaha restaurant that focuses on using local and seasonal ingredients, already has purchased a large batch of basil from Peterson Greens, used to make pesto for potato gnocchi served with cherry tomatoes, said Jessica Duggan, who owns the restaurant with her husband, Colin.

“A lot of people really care about supporting local, they care about the carbon footprint and such, but a lot of them just appreciate the slightly changing nature of (the menu),” Duggan said.

She was especially excited about the greens being available this winter, and the ripening peppers.

“We’re just excited about having a neighbor who’s doing something great who can also be a part of what we do.”

The roots of this lettuce plant grow through a cube of rock wool at Peterson Greens at their warehouse in downtown Omaha.