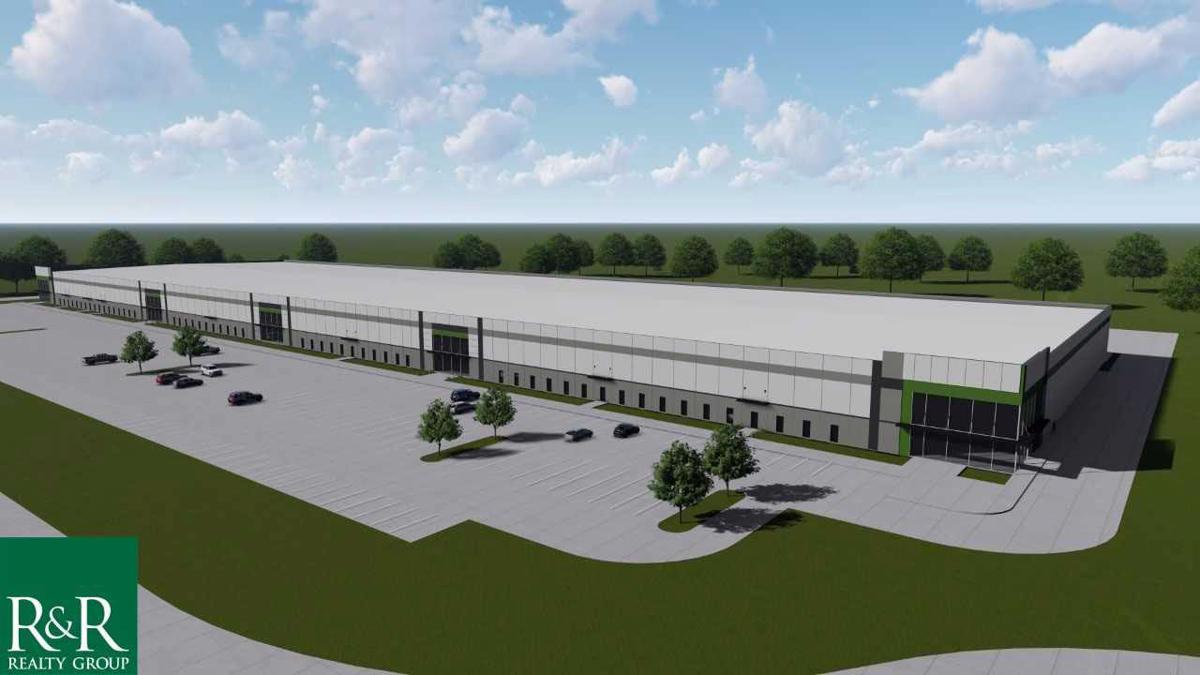 A rendering of one of the 250,000 square foot warehouses at the R&R Commerce Park in Sarpy County. The first of four total warehouses will be ready for occupancy next summer. 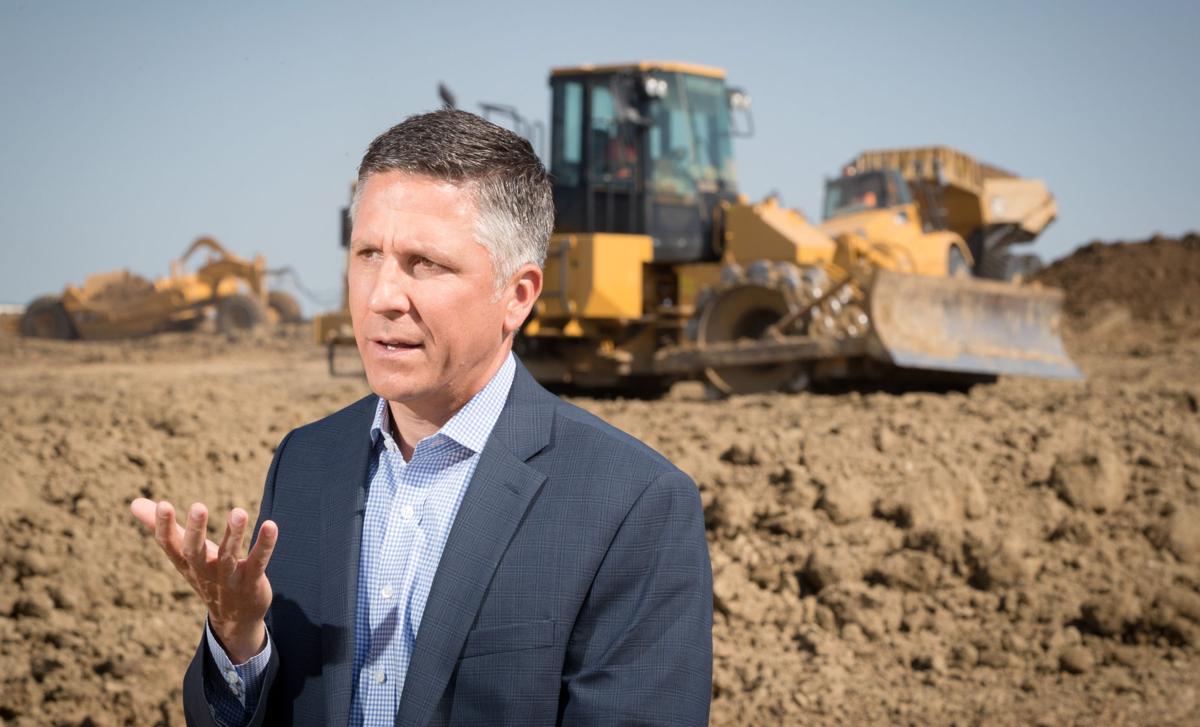 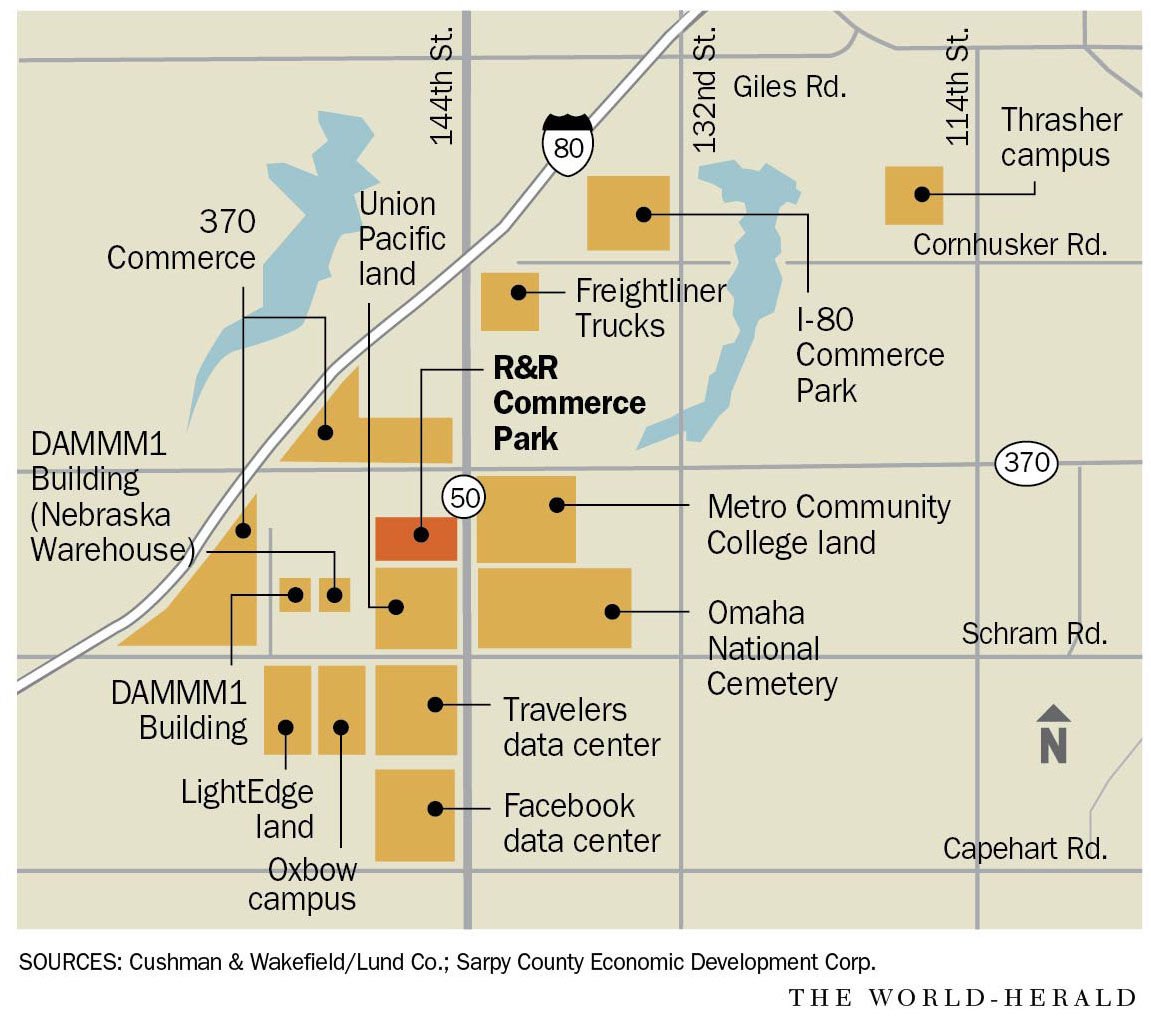 It’s not your traditional Omaha warehouse project, say the developers of the sprawling R&R Commerce Park now under construction in Sarpy County.

Structures there will feature higher-than average ceilings, high-tech sprinkler systems, natural light that spills inside and lots of parking outside.

In addition to manufacturing and distribution operations, the tenant mix could include less-typical industrial users such as a church, a youth sports facility or a millennial mogul seeking a blank slate on which to design a startup hub.

The site stands out as well for its span of nearly 80 acres along Highway 50 south of Highway 370. The first 250,000-square-foot warehouse is to be ready for occupancy next summer. When done, three more structures, for a total of about 1 million square feet, are to occupy what once was raw land.

“We’re trying to build in more flexibility,” said Mark Rupprecht of West Des Moines-based R&R Realty Group, a newcomer to the local market that will own and manage the industrial park.

Rupprecht said R&R was drawn to the Omaha area’s appetite for industrial space — driven, in part, by the accelerating pace of e-commerce and a relative shortage of places that are move-in ready.

The latest report from data crunchers Xceligent reflects that hunger.

“Construction is booming in the Omaha industrial market,” said the market update by the national data firm that works with local commercial real estate companies. Here are other highlights of the Xceligent analysis:

» Since the start of the year, about 305,000 square feet of new industrial and warehouse space has been added to the local inventory. Of that, 91 percent reportedly was occupied at completion.

» Roughly 1 million square feet of new development is underway, almost all of which is to be done before the year’s end and has been claimed by tenants.

» On the rental side, the vacancy rate is a low 3.3 percent. In the first six months of this year, a net 342,000 square feet of industrial and warehouse space was leased.

Denny Sciscoe of Cushman & Wakefield/Lund Co. said quality warehouse and production space is in such demand today that companies are paying record prices for vacant industrial inventory, with some deals eclipsing the $100 per square foot mark.

Nuts & Bolts Inc. owner Joshua Morrison said he bought the Lynam Drive facility — even though it wasn’t for sale.

The previous owner had been trying to lease the property. At the same time, Morrison was planning to build a brand new headquarters for his growing family-owned business, which distributes industrial supplies.

With encouragement from his broker, Morrison submitted an offer to buy the Lynam Drive property. After a few snubs, a bid was accepted.

Morrison subsequently put Nuts & Bolts’ existing facility, at 12005 Centennial Road, on the market. He said it sold in less than a day.

“It’s almost like the housing market in Omaha, which is phenomenal,” Morrison said.

Another swift turnaround had a 68,000-square-foot building at 10500 Sapp Brothers Drive selling for nearly $5 million. Scooter’s Coffee plans to move its production and roasting operation, distribution center and offices into the space that is larger than its current headquarters.

“It’s a tight market,” said Scott Schneiderman of CBRE/Mega, who represented the coffee-maker.

Elsewhere in Sarpy County, Jon Meyers is erecting his second industrial building (DAMMM 2) in as many years at Krambeck Industrial Park. That’s southeast of 156th and Cooper Streets.

Meyers, who has been in the warehouse business since 1963, said he filled the previous 185,000-square-foot warehouse in about a year. It was a speculative project, meaning that no tenants had been secured beforehand. Meyers anticipates a similar demand for the “twin” — although he, unlike R&R, is seeking only traditional industrial tenants such as light manufacturers and logistics companies.

“There are a lot of users out there,” he said.

Another industrial project site on the horizon calls for transformation of a sprawling 140 acres of farmland northwest of 132nd Street and Cornhusker Drive. Arun Agarwal’s White Lotus Group is in the process of buying the tract, and Kevin Stratman of Investors Realty is marketing the property to potential tenants.

The focus of the future I-80 Commerce Park, Stratman said, is to provide shovel-ready parcels upon which businesses can build plants. He said the developer probably would construct a for-lease multi-tenant warehouse as well.

Stratman believes that each project in the works in the Omaha area is distinct enough to attract different users.

“Will it be too much? I think we’re going to be pretty good for a number of years still.”

For R&R’s part, Rupprecht is banking on the flexible nature of his warehouse district to draw a range of tenants.

Increasingly, he said, warehouses are being used by youth sports clubs that value open space at an affordable rental price.

Other businesses might be more interested in parking for trailers or for employees (loading docks are in the back, providing more of an office look out front). Others want both showroom and storage areas, or room to grow.

As landlord of multiple warehouses on the same site, Rupprecht said, R&R is able to shuffle spaces and accommodate various needs.

He said his concept has worked well as e-commerce has exploded, and as companies try to figure out how to distribute products to consumers faster.

Rupprecht is confident that his warehouse park won’t sit idle. Sciscoe, the leasing agent for R&R, said he’s already responded to inquiries from potential clients who could fill up the first building set to open next year.

“This is a growing community,” Rupprecht said. “That’s what caught and held our interest.”

The hotel opening caps a six-year journey for the development team behind the $205 million Capitol District project that includes multiple structures on a two-block stretch near 10th Street and Capitol Avenue.

GreenSlate Development, a leader in the rebirth of midtown Omaha’s Blackstone commercial district, is extending its reach farther east and farther south with another batch of building projects.

A new residential and commercial building is filling the last gap on the storied 100 block of West Broadway in Council Bluffs — further shrinking the amount of idle land that sits between the downtowns of Omaha and the Bluffs.

Instructors said their mission and assignment was for the campgoers to have fun, push boundaries.

A rendering of one of the 250,000 square foot warehouses at the R&R Commerce Park in Sarpy County. The first of four total warehouses will be ready for occupancy next summer.