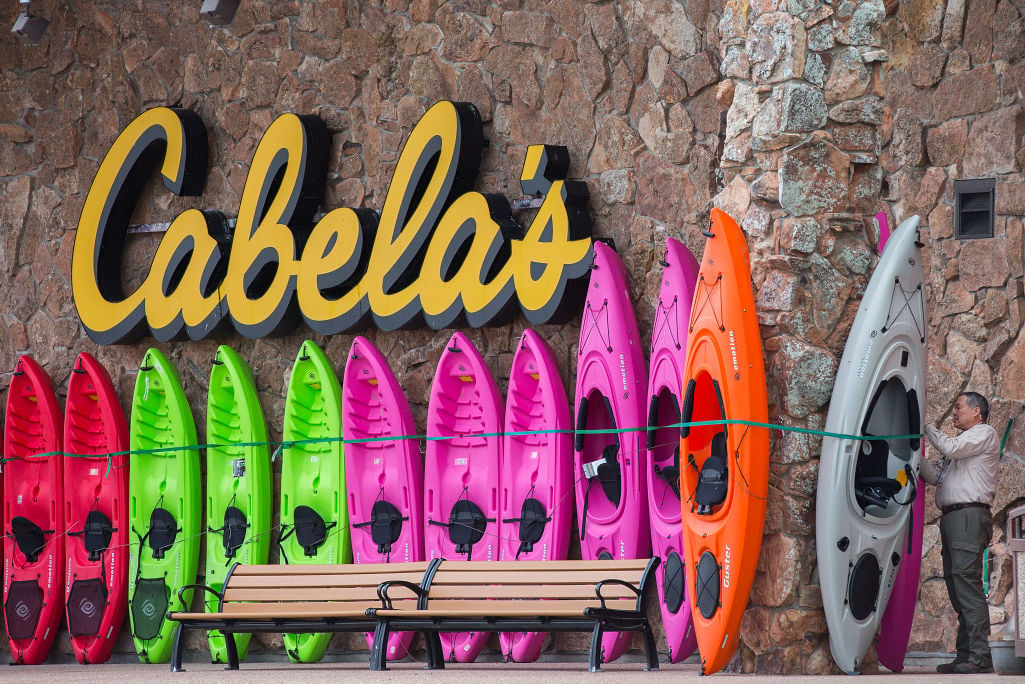 A Cabela's employee removes a sold kayak from the storefront in Sidney. 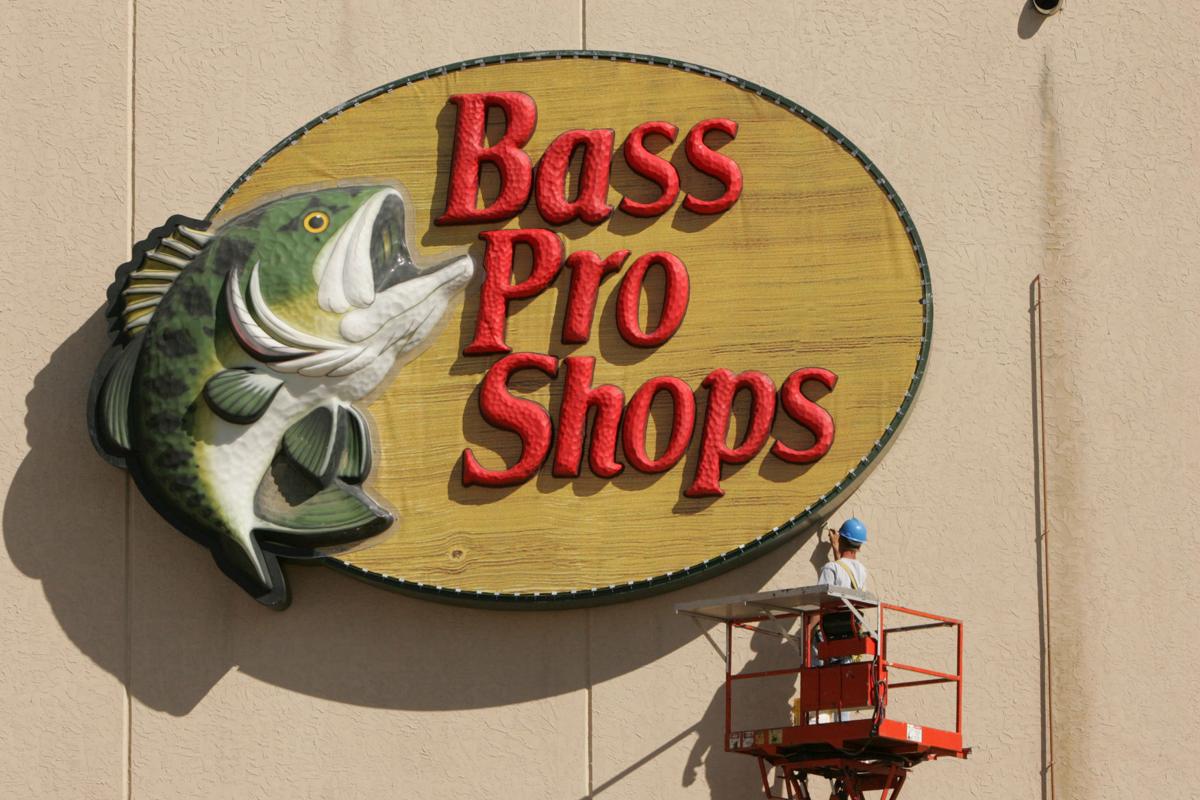 The worst fears of Sidney, Nebraska, could soon come to pass if Bass Pro Shops buys Cabela’s, the local retailer that employs 2,000 people in the town of 6,800.

Bass Pro is one step closer to purchasing Cabela’s now that it has teamed up with New York investment bank Goldman Sachs, whose private-equity branch will provide the financial muscle to do a deal, the Reuters news service reported Tuesday, without citing sources.

That could be good news for Cabela’s shareholders: The company’s stock shot nearly 6.5 percent higher on news of a possible deal. But it could be a disaster for Sidney, a town nearly six hours west of Omaha.

If Springfield, Missouri-based Bass Pro does indeed buy Cabela’s, it most likely would take an ax to some of Cabela’s workforce, say experts in mergers and acquisitions. Bass would look for so-called “synergies,” Wall Street speak for opportunities to cut overlapping operations.

For instance, a combined Bass Pro-Cabela’s would have no need for two accounting departments, two real estate teams, two headquarters offices and so on.

“The most obvious place to look for synergies is reducing two headquarters to one,” said Don Bilson, an analyst with New York research firm Gordon Haskett.

The acquiring firm — in this case, Bass Pro — is more likely to keep its own headquarters than the other way around.

Taylor Gage, spokesman for Gov. Pete Ricketts, said the state has “offered to work with Cabela’s as they seek to become more competitive, and stands ready to assist in any way we can.”

The news about the possible Bass Pro bid came as a shock to a half-dozen Sidney residents on Tuesday evening. All six said they hadn’t yet heard it.

They expressed shock, a hope that Cabela’s leaders will figure out how to stay in Sidney and anxiety, too.

“I can tell you this: There’s more for-sale signs on houses in Sidney than there have been for years,” said Larry Pippitt, a retired real estate broker who was born and raised in the town. “That’s because everybody is concerned about the future of this community. People here want to know what is happening. They want to go on with their lives.”

Wendall Gaston, the former mayor of Sidney and current candidate for the Legislature, called the news “a pretty big surprise.”

“For years it’s been a partnership, Cabela’s needing the city of Sidney, and the city of Sidney needing Cabela’s for jobs and opportunities,” said Gaston, a pharmacy manager. “It’s been wonderful for people to go away to school, get an education and come home and get a really good job. We have bragged about that for a long time.”

And now? “I don’t know,” Gaston said of a potential future without Cabela’s. “I don’t know. I think we are a pretty aggressive town, and we would work hard, but I don’t know.”

Cabela’s announced a “strategic review” in December. Such a review often leads to a sale of the business or parts of it. Cabela’s itself had reportedly already been shopping itself around to private equity firms.

That followed a disclosure from activist investor Elliott Management that the hedge fund had amassed an 11 percent stake in the company by October last year. Elliott at the time said it would press for changes, including a sale of the entire business, or parts of it. Elliott didn’t respond to a request for comment for this story.

Cabela’s opened itself up to the rough and tumble of the public markets when it listed its stock on the New York Stock Exchange in 2004. That brought in a lot of money — $156.3 million when the first stock was traded — but it also brought the scrutiny of Wall Street and outside investors.

One such investor last fall decided to act on what it said was a laggard stock. Elliott, the hedge fund, said Cabela’s stock was undervalued, and the company needed to make changes — or else.

Elliott holds 11.1 percent of the company. That’s nowhere near a majority, but activist investors such as Elliott — called corporate raiders in the 1980s — are known for doing the dirty work that many pension funds and other large shareholders aren’t interested in taking on.

That means the activists can find other shareholders to join their campaigns to replace the boards or management of a company, as has become the case, in one recent example, for Yahoo.

The threat alone is often enough to make companies act. In Cabela’s case, that meant selling itself or breaking itself up.

“Elliott’s been pretty successful on this front, and I would expect that this is going to end up in a sale,” said Bilson, the research analyst.

Elliott also has named Cabela’s real estate and its World’s Foremost Bank, which runs the Cabela’s Club Visa credit card, as potential sale options. Reuters said Tuesday that splitting the company up was still an option, according to sources who asked not to be identified because the deliberations are confidential.

Cabela’s has been exploring a sale of its credit card business and has received interest from other potential buyers, the sources said.

Still, the Goldman-Bass Pro team isn’t the only one interested in Cabela’s: Reuters’ sources said Bass faces competition from other firms, and the sale process still is in the early stages.

Damien Park, managing partner at Hedge Fund Solutions in Philadelphia, said any Bass Pro-Cabela’s deal could be finalized by the end of the year.

He said the partnership with Goldman suggests that Bass Pro might not have had enough money to do the deal on its own. That’s where Goldman came in with necessary capital.

A partnership between a strategic buyer like Bass Pro Shops can sweeten the deal for sellers and investors, Bilson said. That’s because strategic buyers often pay more than private equity firms.

A private-equity firm would have to come in and run the company starting at square one; a strategic buyer — like competitor Bass Pro — already has a store that’s up and running. It can simply integrate Cabela’s into its own operations and slash what overlaps.

When on the hunt for cost-cutting, Bass Pro could look to close retail stores: If there’s a Cabela’s in the same market as a Bass Pro, then one of the two probably would face the chopping block, analysts say.

Said Park: Headquarters “oftentimes are consolidated, and any costs or expenses that are redundant are eradicated.”

All hope isn’t lost for Sidney. Leon Nicholas, senior vice president of Kantar Retail, a research and consulting firm in Boston, said he doesn’t think a Bass Pro-Cabela’s tie-up would necessarily mean the company’s new headquarters would be consolidated in Missouri, Bass Pro’s home. If the companies merge, there might be room for both offices, he contends.

And if a private-equity firm on its own were to buy the business and take Cabela’s off the public markets, that would most likely be a sweeter deal for Sidney. Such firms are known for cost-cutting, but the need for a central headquarters probably would remain.

Dixie Miller, who owns an office supply store in Sidney with her husband, said things have been better in Sidney over the past few months — less talk and less gossip after the initial shock of Elliott’s involvement with Cabela’s in October.

She said she’s not worried.

“Everybody’s kind of calmed down a little bit,” Miller said.

Jim Cabela remains chairman of the Cabela’s board. His brother, Dick Cabela, and Dick’s wife, Mary, founded the company in 1961, selling fishing flies by mail from their kitchen table in Chappell, Nebraska.

Whatever happens, Kantar’s Nicholas said he would expect any buyer to maintain the Cabela’s brand, which he called valuable.

And even if a Bass Pro-Cabela’s merger does happen, it’s not a silver bullet for improving sales at the outdoor retailer. Bigger isn’t necessarily better, Nicholas said.

“I don’t think that by getting bigger that will necessarily help them compete against, say, an Amazon,” Nicholas said. “We see a lot of these mergers that happen and it’s almost like they think something magic is going to happen because they’ll come together. Not necessarily.”

An earlier version of this story gave the wrong last name for Dixie Miller.

The company said the strategic review that may lead to a sale of the business, announced Dec. 2, continues, but it did not provide any further updates.

Cabela’s employees and shareholders wondering what’s ahead for the Sidney, Nebraska, retailer could have an answer by the end of the month.

As Cabela’s stays silent, thousands of jobs hang in the balance across Nebraska

The Sidney, Nebraska, headquarters isn’t the only thing at stake as Cabela’s considers a sale of the company or parts of it. Hundreds of jobs in several Nebraska cities also could be on the line.

A Cabela's employee removes a sold kayak from the storefront in Sidney.