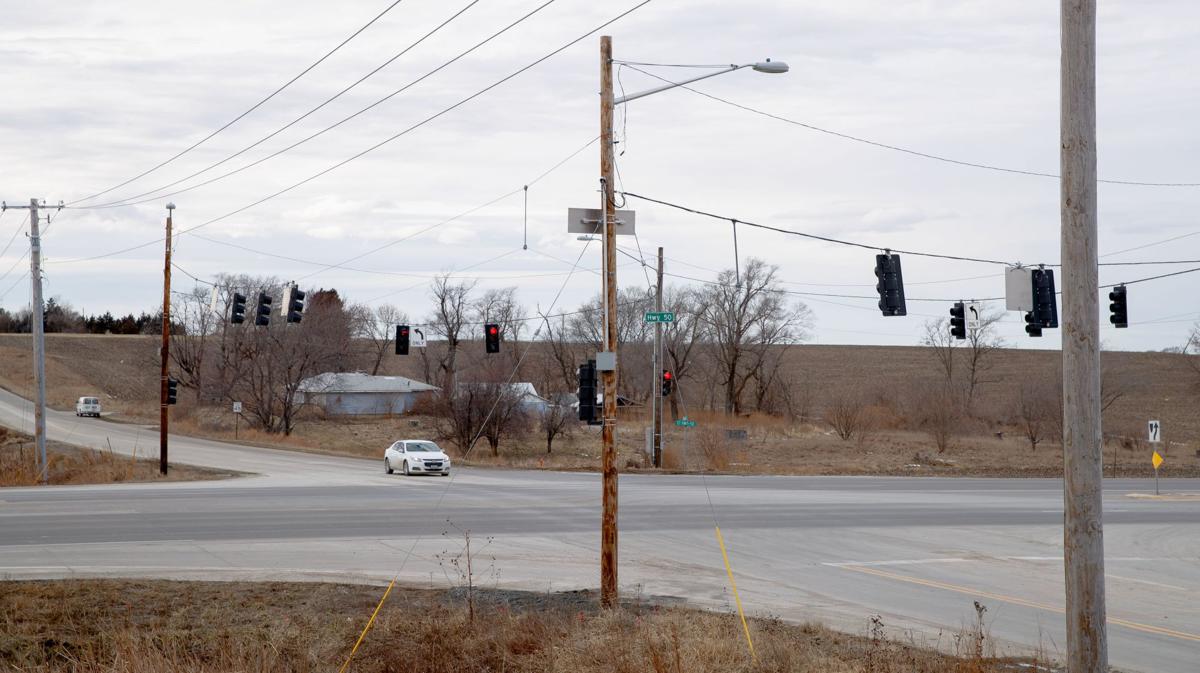 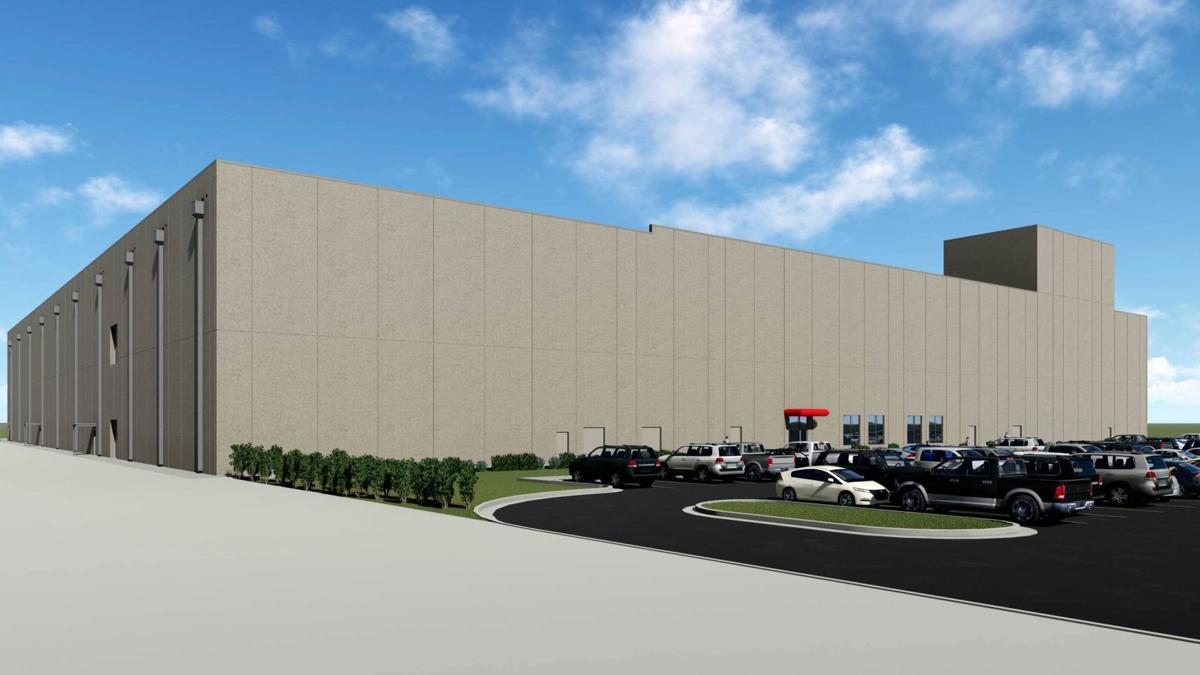 Concept design for the data center’s operations building as part of the Schram & Highway 50 mixed-use district.

Yet another giant land tract along Highway 50 in Sarpy County is poised to get a new campus that would hum around the clock with operations supporting information technology.

The identity of the latest on-deck newcomer — which would join the likes of Facebook and Travelers insurance — for now is being kept secret from the public. Still, Papillion officials earlier this month gave the government go-ahead to what is being called “Project Wizard.”

Sarpy County Economic Development Corp., acting as frontman for applicant Fireball Group LLC, promised more details once the land transaction is assured and agreements are secured with utilities that would service the property.

According to available public records, the 275-acre development site is northwest of Highway 50 and Schram Road. The campus would be built in phases over multiple years, but ultimately could rival the size of nearby Facebook data center facilities still under construction.

When fully built out, those Facebook structures on both sides of Highway 50 are expected to span just under a hulking 3 million square feet, said Andrew Rainbolt, executive director of the Sarpy economic development group, which is an arm of the Greater Omaha Chamber of Commerce. Right now, construction is taking place on the initial phase that is on the west side of the highway.

David Black, longtime mayor of Papillion, referred questions about the new company’s identity to Rainbolt, but said the sheer size of that project site points to another high-profile tenant.

“Anyone doing a data center of this size is going to be a well-known company to anybody,” Black said.

He’s convinced the deal is good for the community. Schools especially should benefit, Black said, as they would receive new property tax revenue but likely wouldn’t serve many more students, if any, as a result of the project, at least early on. No estimates were provided on future revenue.

Roughly 100 to 200 employees would be on-site during the main shift of the proposed 24-hour, 365-day-a-year operation, Papillion city records show. That number reportedly could increase later, and is separate from the hundreds on-site to construct the facility.

Administrative office space as well as data center structures are to rise on the former farm ground, most of which is now owned by Union Pacific Railroad. Rainbolt said his agency has an option to buy the land from U.P., and that it eventually would be owned by the incoming data center user.

Landscaping is planned, including to buffer the side facing the Omaha National Cemetery.

If the approval process seems a bit of déjà vu — including withholding the tenant’s identity — that’s because Sarpy County’s green fields have become home to several data center projects in recent years.

Different this time around, though, is a question some public officials are raising: Is the area nearing a data center saturation point?

The concern was posed during the Papillion Planning Board approval process. Both Black and Rainbolt told The World-Herald that the question is valid, as data centers can take up a lot of power as well as land that theoretically could be held onto for future manufacturing and industry centers with more jobs.

“When do you have too much concentration of one thing?” Black asked. “It is a very real question.”

As for Project Wizard, the mayor said Papillion is equipped and eager for it. Both the city’s Planning Board and City Council gave unanimous approval. Black said his city probably would not want three or four more of similar size any time soon, though.

To date, Sarpy County’s data centers include: Facebook and Travelers, both near the future project site along Highway 50 and Schram Road. Travelers controls a large tract, but its actual data center spans a smaller portion, about 185,000 square feet.

Others include LightEdge Solutions at 1148 American Parkway in Papillion. Elsewhere in Sarpy County is the data center for Yahoo, now known as Oath, near 108th and Giles Road and Fidelity Investments facility near 108th and Cornhusker Road.

Google has a sizable data center campus in Council Bluffs.

The number of data centers has sparked development-ripe Papillion to update its comprehensive plan that will guide growth over the next 10 to 15 years, Black said, adding that the review is to address other types of industries as well.

The University of Nebraska-Lincoln’s Bureau of Business Research also is preparing, at the request of the chamber, a report on the economic impact of data centers.

Rainbolt said that while the report still is being finalized, it will show that the impact so far has been positive. He said that for every 10,000 square feet of data center, there is a $10.6 million economic impact during the construction phase. In the case of Facebook, that equates to about $3 billion over multiple years of build out, he said.

About 1,500 trades and construction workers are working at the Facebook site, Rainbolt said, similar to the population of the nearby town of Springfield. Among economic benefits is an uptick in area restaurant and hotel use.

What is the magnet for the data centers? Rainbolt said they’re attracted to the area in part because of new energy rates created by the Omaha Public Power District for big electricity users seeking to power their operations with renewable energy. Papillion City Planning Director Mark Stursma said during a recent meeting of planning commissioners that the ability of utilities to service the facilities plays a large role in how many Papillion is able to support.

As far as infrastructure needs, Rainbolt said, the incoming data center is expected to pay related costs for its development.

A spokeswoman for the Nebraska Economic Development Department would not comment on public incentives that might have been offered by the state to woo the latest prospective data center user.

But in 2012, a legislative bill added extra incentives for data center users that invest at least $200 million and hire at least 30 employees. The “Tier 2 Large Data Center” component offers a 10 percent state tax credit on investments.

Also raised during the Papillion Planning Board meeting: What might happen to the specially tailored structures if technology shifts render such large facilities obsolete. To that, Rainbolt said he foresees conversion to other uses, perhaps warehouse or manufacturing facilities.

“Essentially they are really well-built warehouse buildings, but unlike some others, they also have enormous power capacity.”

Denny Sciscoe, a real estate expert who has brokered several deals in the Highway 50 industrial area, is not involved in the Project Wizard deal but believes the community payoff would be positive. He foresees even more growth potential for data centers.

“We’re in the first or second inning of data centers,” said the director of industrial services for Omaha’s Cushman & Wakefield/the Lund Co.

If he had any concern, Sciscoe said, it’s that data centers don’t necessarily need the visibility of “prime real estate” fronting Highway 50. They could focus instead on other available tracts, leaving more heavily traveled lots for businesses with more public interaction.

For now, Rainbolt said, he has no worries that Sarpy is nearing data center overload.

He said that’s a question, though, that should be explored. “How many is too many is a question the community needs to decide.”

Best of the weekend: Here are 7 stories that you don't want to miss

Here is a convenient roundup some of our best work from the last several days that's worth checking out.

A task force made up of 10 state senators says that the act isn't generating sufficient jobs for the millions in tax incentives it provides and that it should be replaced.

Nebraska gas tax will rise 1.6 cents a gallon at start of next year

The new rate will be the highest in the state's history; most of the increase can be traced to legislation passed in 2015 to help address a backlog of road repairs.

A growing number of companies are extending benefits to part-time, hourly workers

When one of the 900 hourly workers at Rent the Runway died, CEO Jennifer Hyman had to reckon with a harsh reality. The dead man's coworkers, a close group that included some of his family members, couldn't take time off to mourn his death or attend the funeral.

Construction crews have arrived. Dirt is flying. Ground preparation is well underway for the new global headquarters of Kiewit Corp. — even before all key property owners have cleared the path for progress.

A map on the tech giant’s website indicated the center will be in the Omaha area. The Nebraska facility was announced as part of a national expansion plan by Google, which will invest more than $13 billion in 2019 in data centers and offices across the country, according to a statement.

The report, conducted by UNL's Bureau of Business Research, found that operation of the county's largest data centers has an annual statewide economic impact of $522 million, with an employment impact of nearly 1,900 direct and indirect jobs.

Concept design for the data center’s operations building as part of the Schram & Highway 50 mixed-use district.