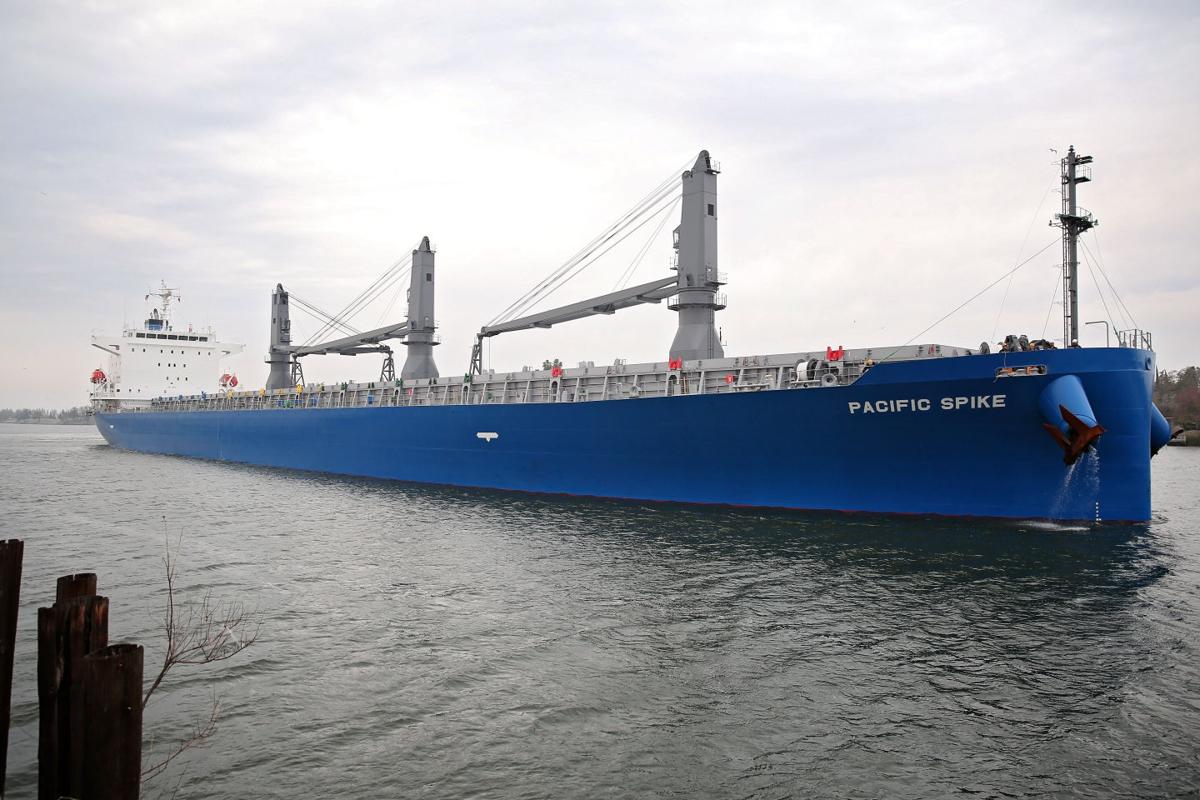 The oceangoing freighter Pacific Spike was custom-built to haul the special railroad tracks for U.P., which is installing the next-generation rails on its 32,000-mile network. 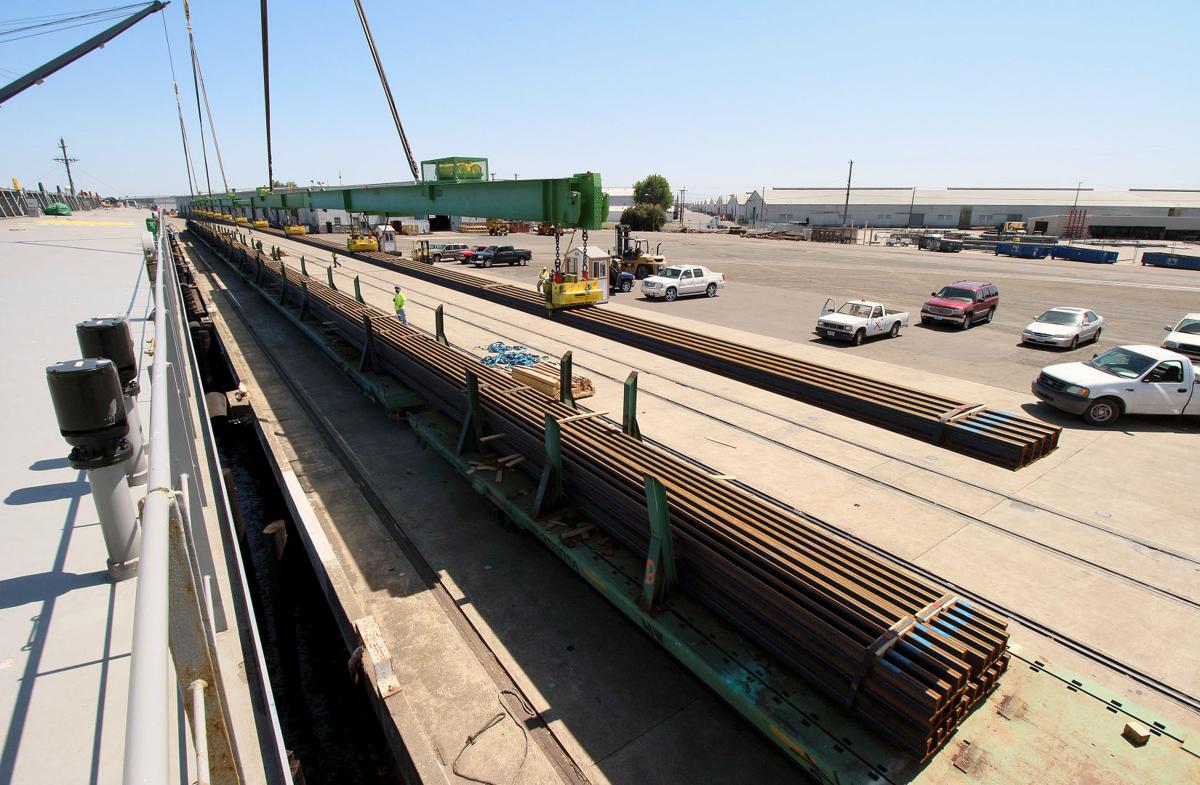 The massive rails wait on the dock of custom-built terminal space in Stockton, California. The first projects scheduled to get the new rails will be in northern Iowa, Arkansas, California, Illinois, Kansas, New Mexico and Texas.

Reducing the number of welds in a section of replacement railroad track has been a quest that sent Union Pacific Railroad around the world, a journey that finally culminated this year on a lonely stretch of west Texas scrubland.

The Omaha-based railroad is now the first large U.S. railroad to employ superlong rail lengths to replace worn track. The 480-foot pieces of rail — one is the length of 1½ football fields — require 88 percent fewer welds than the current 80-foot standard pieces. Fewer welds mean fewer stress points and, Union Pacific hopes, fewer derailments — a particular concern now that shipments of ethanol, chemicals and crude oil are on the rise.

The first stretch to get the new rail was in Texas, between Sierra Blanca and Finlay — a 24-mile patch that was upgraded this year. To do so, U.P., employer of 8,000 Nebraskans, had to scour the earth and its seas.

Rail length isn’t something most people think much about, but it has had an enormous effect on U.S. business and society. The first railroads used 16-foot-long sections that were bolted together; the steel wheels moving over the joint caused the “clickety-clack” sound forever associated with trains.

It was about then that Union Pacific and two companies based in Japan — Nippon Steel and Sumitomo Metal Corp. — began discussing a revolutionary idea: manufacturing and shipping rail in 480-foot-long sections. The dream at the time was using only two welds to create quarter-mile lengths, an 88 percent reduction.

Davis said the Omaha company evaluated many options for acquiring the 480-foot rail sections, including U.S. steelmakers. But in the end, only Nippon Steel, the world’s second-largest steelmaker, was up to snuff, Davis said.

Then came the problem of transporting something that big. Existing freight ships couldn’t easily handle rail that long. Undaunted, a ship was commissioned and built, the Pacific Spike, a handsome blue-and-white vessel with a cargo hold that stretches the entire length of its 623 feet.

The Pacific Spike is outfitted with three cranes that can simultaneously unload five rails weighing 10 tons. The rail is stacked onto specially designed shuttle cars dockside to be moved into storage.

How to transport the rail once it gets to port also was an obstacle: Construction on 25 acres of custom-built terminal space at the Port of Stockton in California wrapped up this year.

Designed from scratch, the terminal has three tracks and two bridges, plus storage and welding shops. After the rails arrive in California they are loaded onto trains and sent where they are needed.

As far as the prospect of preventing derailments, it is a subject that gets a lot of attention from railroads. This year Union Pacific — the second-largest U.S. railroad by ton miles behind Berkshire Hathaway-owned BNSF Railway — plans to spend $4.3 billion on capital expenditures, up from $4.1 billion last year.

Meanwhile, U.P. derailments are down 38 percent over the past 10 years, according to records of the Federal Railroad Administration, even as shipment volumes rise.

Overall, volumes at Union Pacific are up about 25 percent in the past five years. Among the cargoes that have jumped are crude oil, which has on five occasions this year caught fire after derailments in the United States and Canada. None caused fatalities and none involved trains operated by U.P.

Crude-by-rail shipments in the United States have risen from practically zero in 2008 to almost 375 million barrels last year, part of an industrywide spike after demand for oil transportation jumped amid the hydraulic fracturing techniques that freed oil trapped in tight rock formations in Montana and North Dakota. Union Pacific hauled 141,000 carloads of crude last year, up from about 5,000 as recently as 2010.

“My initial thought is ‘Fewer welds, possibly fewer derailments,’ ” said Logan Purk, who analyzes transportation industry stocks for wealth adviser Edward Jones, speaking of Union Pacific’s long rail. “What is important is it shows management thinks to this level of detail and what they can do to improve further.”

As for Nebraska, it will be some time before folks living or driving near Union Pacific’s rail lines can expect to see lengths that would stretch from home plate to the center field fence at the old Polo Grounds Major League Baseball stadium in New York. The first projects slated to get the new rails are scheduled this year for northern Iowa, Arkansas, California, Illinois, Kansas, New Mexico and Texas.

The Nebraska Emergency Management Agency said late June reports from the railroad indicate that an average of between two oil trains and eight oil trains a week were entering Nebraska near South Sioux City before heading east into Iowa along the Cass-Sarpy County borders. That is down from 12 trains a week to 18 trains a week reported in May by the Texas-based railroad owned by Omaha’s Berkshire Hathaway.

The oceangoing freighter Pacific Spike was custom-built to haul the special railroad tracks for U.P., which is installing the next-generation rails on its 32,000-mile network.

The massive rails wait on the dock of custom-built terminal space in Stockton, California. The first projects scheduled to get the new rails will be in northern Iowa, Arkansas, California, Illinois, Kansas, New Mexico and Texas.