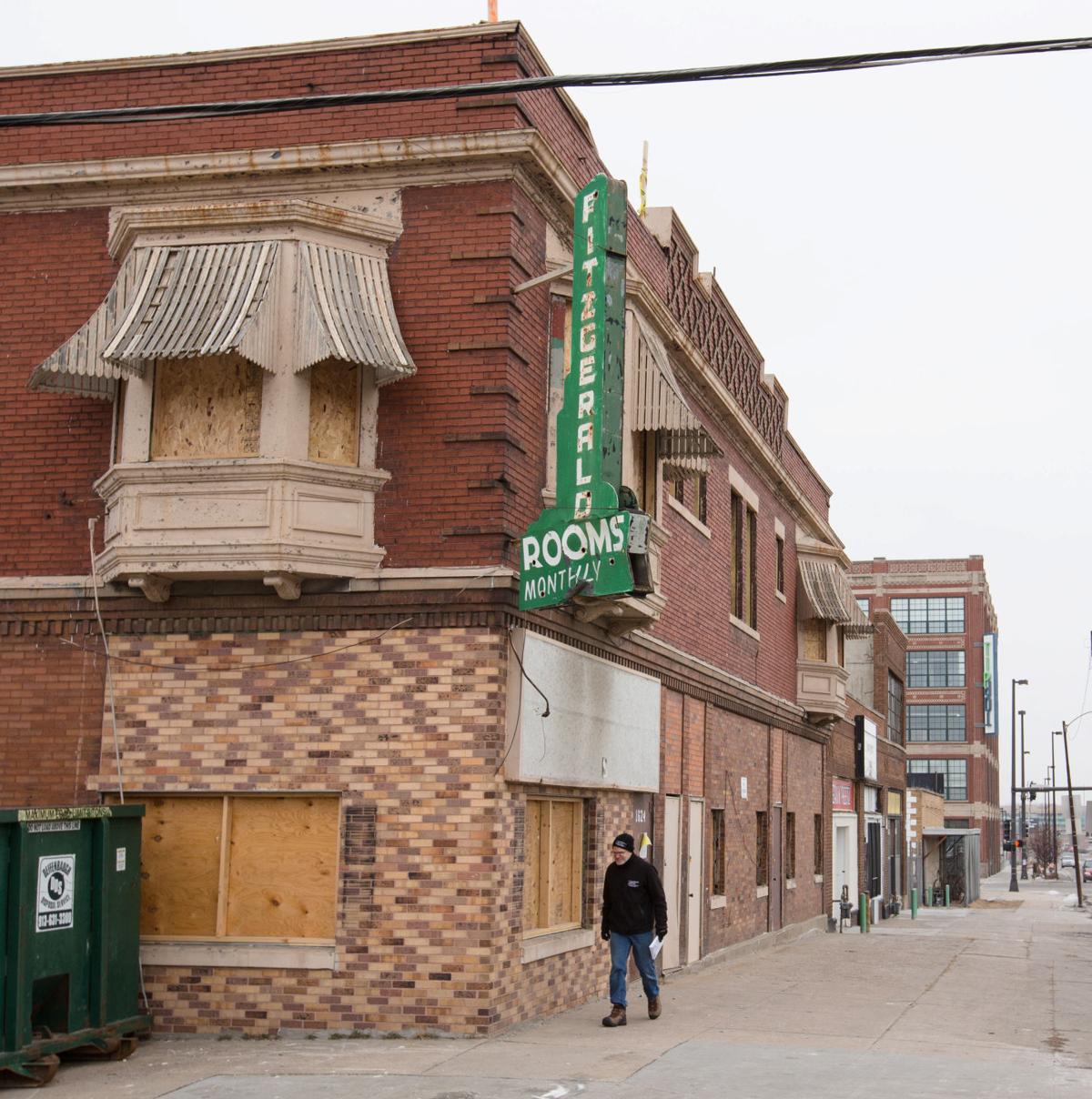 Paladino at the Fitzgerald, which closed in 2006. Development has since sprouted around it, including the downtown baseball stadium.

The ornate Sullivanesque marker over an entrance to the building. 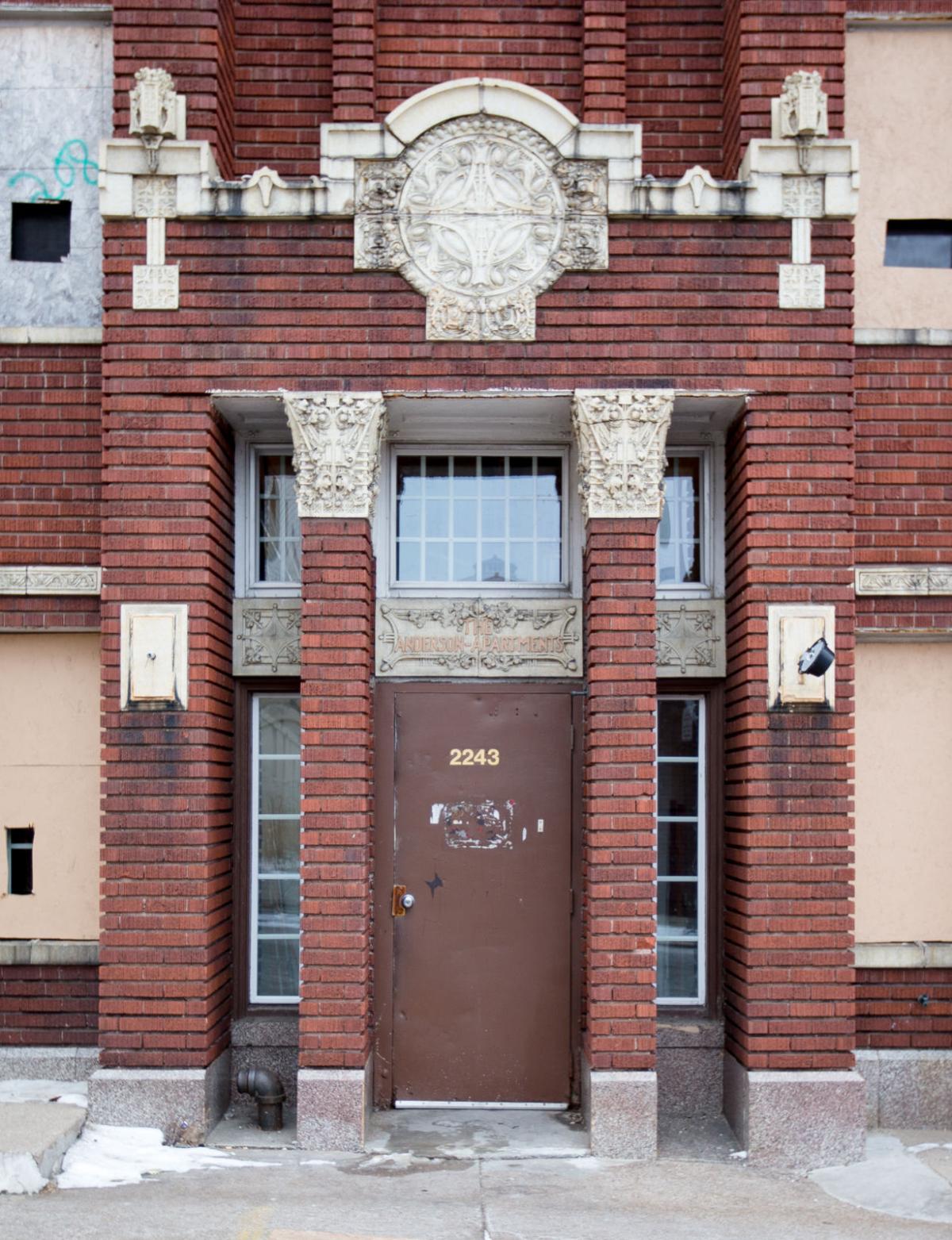 Ornate stone surrounds the Jones Street entrance for apartments at the Anderson. A business entrance is on 24th Street. 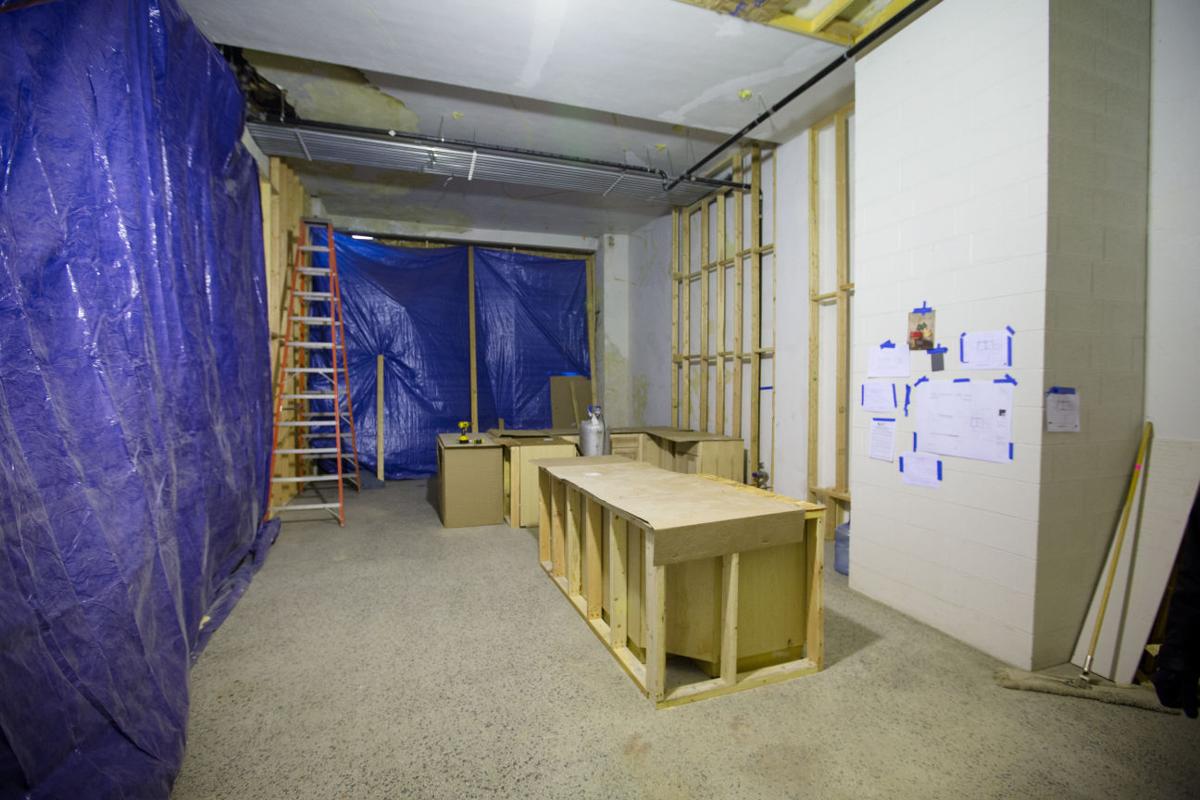 The Well Grounded coffee shop is under construction in the Anderson Building, and plans also call for a Tastes of Soul cafe. The building, vacant for several years, also offers three other ground-level commercial bays.

Dave Paladino is confident that Omaha is turning a corner and urban dwellers aren’t as obsessed with parking right at their front door.

Indeed, he’s banking on that belief by renovating two long-vacant, century-old residential buildings on the fringes of downtown. Neither the historical Anderson Building near 24th and Leavenworth Streets nor the former Fitzgerald boardinghouse at 17th and Cuming Streets has its own on-site parking lot.

Tenants of both would vie for street spots, and the Anderson will have a reserved parking area about a block away.

“I think people are willing to walk,” said Paladino, recalling days he lived in Boston and did the same. “As the green movement takes more hold, people will not want to own a car.”

The plans by Paladino, who owns Landmark Group real estate company, would add 40 more market-rate apartments to the downtown area: 28 at the Anderson and 12 at the Fitzgerald. The Anderson also offers five ground-level commercial bays, two of which are leased to the Well Grounded coffee shop and the Tastes of Soul cafe, both poised to open in a few months.

Such efforts to restore residential life to shuttered buildings in transitional pockets with inconvenient parking will be a test of Omaha’s urban apartment scene, said Doug Bisson, HDR’s vice president and community planning manager, who has led multiple studies of downtown and midtown.

Five years ago, he said, no one in their “right mind” would have invested in such properties. But with the resurgence of downtown and midtown living, he said, developers are searching for “the next frontier.”

Kristine Gerber of Restoration Exchange Omaha believes also that young “preservationists” in Omaha, like counterparts in big urban cities across the country, will see the value of living in fringe areas that may not have great parking options yet are on a bus line or are within biking distance to work and play sites.

“This generation ‘gets it,’ ” said Gerber. “They understand the greenest thing you can do is renovate and restore old homes and they’re willing to do that.”

Paladino, attracted to the buildings’ architecture and history, acknowledges that his latest projects have somewhat sketchy pasts and are “pushing the bounds.”

(His other work includes conversion of a paint store at 27th and Douglas Streets into Landmark’s office; development of a four-story storage facility at 147th Street and West Maple Road; and purchase and renovation of a few apartment buildings near 48th and Boyd Streets. His firm manages numerous rental properties, but Paladino said his special interest is in preserving historic structures.)

Records show that the Fitzgerald, a 107-year-old building at 1624 Cuming St., was last occupied in 2006, when its rent-by-the-month rooms closed amid building code violations stemming mainly from a sewage-soaked basement where floor joists had rotted and at least one support column was unstable.

The boardinghouse, whose roots are as a pharmacy, last served as a transitional step out of homelessness. When it closed, many of its tenants went to another boardinghouse or the Siena-Francis House shelter, which remains operational to the north.

Since the Fitzgerald closed, however, development has sprouted around it. The downtown baseball stadium, home of the College World Series, stands a few blocks to the southeast. Other market-rent apartments, private ventures and startups moved in to lead a renewal.

Paladino, seeing the Fitzgerald’s potential in an area he describes as “on fire,” paid $215,000 for the 12,540-square-foot building. He estimated renovation will cost $750,000 to $1.1 million, and he plans to apply to the city for tax-increment financing. TIF allows developers to use part of a project’s future property taxes for upfront costs.

Paladino’s vision is a dozen high-end, mostly one-bedroom apartments, ranging from 500 to 1,000 square feet, that are to be restored in the spirit of Boston’s Back Bay area, where he once lived.

Units facing Cuming Street each would have their own entrance to a second-floor dwelling. The wide sidewalk would be transformed partially into an outdoor courtyard with brick columns and a wrought-iron gate. “It will be a secure, private kind of place for tenants to congregate and socialize,” Paladino said.

A second courtyard for tenants would be behind the building’s planned glass and brick facade. Rents would range from about $800 to $1,200.

The J.F. Bloom & Co. building, across the street at 1702 Cuming St., also is being renovated into restaurant and retail space. Nearby, the new $9.2 million Nichol Flats apartment and retail building is rising at 16th and Nicholas Streets, and the old Rochester warehouse complex to the northeast is being converted into 75 apartments.

Paladino’s other ongoing downtown project, the Anderson apartments, stands just north of Leavenworth Street, in a pocket challenged by loitering and aging structures, some boarded up.

Built in 1924 at 701 S. 24th St., the Anderson has been vacant several years, but its position between downtown and midtown urban renewal efforts made it attractive to Paladino. He bought the 27,291-square-foot structure for about $90,000. He said he does not plan to request TIF or other public financing for the Anderson.

“It was cheap, and it’s a cool building,” said Paladino, who expects the renovation tab to be about $1.5 million.

Rents would range from about $600 for a 300-square-foot micro-apartment to about $900 for larger units. Each would have washer-drier connections and access to an interior courtyard with a grilling area, but be designed to be affordable “workforce housing.”

Listed on the National Register of Historic Places, the three-story brick Anderson is a classic and rare example of a still-standing structure built in its era for the dual purpose of commercial activity and residential living, said Jennifer Honebrink of Alley Poyner Macchietto Architecture, who wrote the register application.

Marked by two distinct entrances, the Anderson retains its Jones Street entryway for apartment dwellers and a 24th Street entrance for businesses.

Architecturally outstanding, Honebrink said, is the Anderson’s terra-cotta detail on its exterior.

During a recent tour, Paladino pointed out the ornate stone around the Jones Street entryway. “In today’s dollars that would be unaffordable,” he said.

Paladino hopes to have apartments ready this spring, and is counting on supporters of sustainable living to fill the apartments.

“For Omaha to be more progressive — which it wants to be — it has to unhook the reliance on parking spots,” Paladino said. He foresees that happening, especially as Omaha’s public transit options grow.

Among those who share the vision is Sarah Van Putten, an Omaha native who in March plans to launch her Well Grounded coffee shop in a corner bay. Van Putten said she was drawn by the affordable rent, the neighborhood and a hope that the area becomes more of an arts district.

She plans to donate 10 percent of her profits to a charity that builds wells around the world.

Planning a May grand opening is the Rev. Donzell Grant III, with his Tastes of Soul cafe, which is to feature home-cooked dishes such as Southern fried chicken, smothered pork chops and candied yams.

“I believe we can do something great on that corner,” said Grant, who moved to Omaha from Chicago. “It’s a prime location, maybe not right now, but give it time — it will flourish.”

Paladino at the Fitzgerald, which closed in 2006. Development has since sprouted around it, including the downtown baseball stadium.

The ornate Sullivanesque marker over an entrance to the building.

Ornate stone surrounds the Jones Street entrance for apartments at the Anderson. A business entrance is on 24th Street.

The Well Grounded coffee shop is under construction in the Anderson Building, and plans also call for a Tastes of Soul cafe. The building, vacant for several years, also offers three other ground-level commercial bays.