Friends tell me they feel intimidated cooking for me. I let them in on my secrets to ease their minds: My favorite dinner involves popcorn. Or a baked potato. Occasionally, just a burger.

I keep these weekly meals from boredom by swirling in some variety or inspirations from dining out. Cheese and black pepper on the popcorn, for example, might remind me of cacio e pepe at our favorite Italian spot.

We make our popcorn on the stovetop with oil suited for high heat cooking. In fact, we have designated a 3-quart pot solely for popping corn. Like an old friend, we know the quirks of how to work with the pan, including the proper amount of oil and heat adjustments to get every kernel popped without burning. If this pandemic has you deep in microwave popcorn, give this stovetop version a shot — it’s truly dinner-worthy.

Loaded baked potatoes starred as dinner many nights when the kids had sporting events and tons of homework. Now I crave them for both comfort and indulgence. I like to swap sweet potatoes for russets, and plain yogurt for sour cream in a nod toward better eating.

To offset the mundane, this fall I’m loving a version that tops crusty baked sweet potatoes with a whimsical take on Buffalo-style chicken wings. Think chicken nuggets, blue cheese and hot sauce billowing out of the potato’s center. Feel free to swap frozen eggplant cutlets, or vegetable fries, diced after heating, for the chicken for a meatless main.

We enjoy takeout burgers on occasion — mostly as inspiration for our own versions made at home. My current favorite mash-up involves a hot corned beef sandwich with a juicy beef burger. It may sound strange to pile corned beef over grilled beef — but think bacon on a burger and you’ll get the concept. I’ve added a spoonful of sauerkraut and a dressing reminiscent of Thousand Island. This is no ordinary burger. The recipe makes six burgers — leftovers reheat nicely in the microwave for speedy meals. Of course, you can make them with ground turkey to reduce the fat content.

As for any burger, the better the bun the better the sandwich. Ciabatta buns have those large airy holes that keep them from being too dense. Pretzel buns offer sweetness that pairs well with the tang of sauerkraut. Thick slices of toasted, crusty country bed or marbled rye likewise satisfy my good bread theory.

Armed with these recipes, you can cook for me anytime. I’ll even do the dishes!

1. Have all the ingredients near the stove. Turn on the exhaust fan. Pour oil into a deep 3-quart saucepan with a lid. Add 2 popcorn kernels and set it over medium-high heat. Cover the pan.

2. Stand near the stove and listen for the kernels to pop. When they do, that means your oil is hot enough. Carefully pour the remaining popcorn kernels into the pan. Cover and shake gently. Cook over medium-high heat while the kernels pop vigorously, a minute or two. Reduce heat to very low, shake the pan and let cook until you hear the kernels stop popping. Turn off the heat and let stand covered while you get out a large bowl.

3. Pour the popcorn into the bowl. Immediately sprinkle with the salt, yeast and powdered cheese to taste while mixing gently with a large spoon. Enjoy while hot.

Note: For powdered cheese, try the cheddar cheese powder from King Arthur or The Spice House (thespicehouse.com). I also like the Taylor Street Garlic & Herb Seasoning from The Spice House when I want a bit of garlicky kick.

1. Heat oven to 425 F. While the oven heats, pierce potatoes in several spots with the tip of a knife. Microwave potatoes on high (100% power), turning them over occasionally, until they are easily pierced with a knife, 10 to 12 minutes.

2. Put chicken nuggets in a single layer in a lightly oiled cast-iron skillet or baking pan. Place potatoes alongside nuggets. Bake, turning potatoes and nuggets once, until outsides are crisped, 12 to 13 minutes.

3. Put each potato on a serving plate. Cut an X in the center of the potato and then squeeze potato to open it out at the X. Fill each potato with half of the hot chicken, spoonsful of the hot sauce and blue cheese. Top with a dollop of the dressing, diced celery and chives. Serve.

1. Cut onion in half. Cut each half into very thin wedge slices. Heat a large skillet over medium-high heat until hot. Add oil and onion slices. Cook and stir until onion is golden and tender, about 10 minutes. Add sugar; cook 2 minutes more. Use warm or refrigerate covered up to 3 days.

2. Evenly divide the ground beef into 6 portions. Use 2 small deli containers to press out 6 burgers by placing a portion of the beef inside one and using the second container to press the meat into an evenly shaped round. Tap the burger patty out onto a platter. Repeat. Season the outsides with salt and pepper. Refrigerate uncovered for at least 30 minutes or up to several hours.

3. Prepare a charcoal grill or heat a gas grill to medium-high. Heat the grill grate.

4. Mix mayonnaise, ketchup and relish in a small dish. Put rinsed, drained sauerkraut into a small bowl. Microwave covered on high until hot, about 2 minutes. Reheat onions if necessary. Set everything out near the grill.

5. Put burgers on grill directly over the heat. Cover grill and cook without turning until bottom is nicely marked and golden, about 5 minutes. Flip burgers and top with the corned beef. Grill covered, without turning, until nicely browned and medium-rare, about 2 minutes more. Top with cheese slices and grill 1 minute more. Remove from grill and let stand on a plate for a couple of minutes. Meanwhile, toast the cut sides of the buns over the heat of the grill.

6. Spread buns on both sides with mayonnaise mixture. Place burgers on the bun bottoms. Top each with some of the onions and then the sauerkraut. Put the top of the bun in place. Serve hot.

Note: You can substitute 1/3 cup Thousand Island salad dressing for the mayonnaise mixture.

From apple cider to doughnuts

Among the highlights of visiting an apple orchard are those hot, crispy apple cider doughnuts. After a day of picking apples, they are a treat. There's no need to wait until the next apple-picking season to enjoy these fall favorites when you can make your own. Many recipes call for the doughnuts to be fried. We're taking a simpler approach with a rich cake batter version, then baking them in ...

Garlic powder in the spice limelight

Before the shutdown, most food media content was geared toward foodies and cooking enthusiasts, a community with a strong desire to learn about all the esoteric ingredients and equipment that people in my profession traffic in daily. But after the quarantine left everyone sheltered in place, people who never cared about cooking suddenly had to. Our coverage at The Times pivoted quickly - to ...

A dish that keeps on giving

For the amount of time I have spent in the kitchen, one would think that roasting a chicken would be old hat by now. I should have dozens of roasted chickens in my culinary past. Sadly, until last year, I could count the number of chickens I've roasted in my lifetime on one hand. Why? Maybe it's the dried-out chicken breasts the teen in me remembers eating at friends' homes that made me ...

When the pandemic hit, grocery stores were having trouble keeping up. First it was Clorox wipes and toilet paper. Then it was flour and ... tofu? "In a matter of two weeks, we sold more tofu than we did in an entire year," says Carmella Lanni, co-owner of South Philly's vegan grocery store V Marks the Shop. "People couldn't get it in other places, and so when word got out we had it, people ...

Fill up on peppers

Now that fall is official, comfort food is making a return to my kitchen. One of my family's chilly weather favorites is stuffed peppers. My husband likes the dish because it's warm and filling. I like it because I don't have to be boxed in by any one recipe. Peppers taste just as good filled with a savory mix of ground beef and cheese as they do with spicy or sweet sausage, tuna, grains or ...

It finally is starting to feel like fall. My lawn is beginning to be scattered with leaves, and while I still have some flowers and vegetables growing, many more have been pulled out and tossed onto the mulch pile. Maybe it's time to move from the grill to the stove and make something a little heartier for dinner like an awesome seafood risotto. Flavored with bits of chopped chorizo and loads ...

Rosemary adds a fragrant touch to sauteed fish fillets. I have used mahi-mahi, but any type of firm white fish will work. The cooking time depends on the size of the fish. Count about 8 minutes per inch of thickness. The lemon and garlic sauce flavors the pasta and complements the rosemary on the fish. Helpful Hints: - Snapper, grouper, tilapia or cod can be used instead of mahi-mahi. - Any ...

Joining sourdough and Dalgona coffee, homemade ricotta has become one of the Instagram recipe stars of the pandemic, with thousands of home cooks sharing pictures of their curdled milk products draining in cheesecloth or smeared over toast with tomato jam. Cheese experts will argue that without cooking whey, home cooks aren't really making ricotta. But when you add acid to milk, and hold it at ...

It isn't quite pizza. But it sort of is. Flatbread is pizza's flamboyant cousin. There is a strong DNA connection, and they often look alike. But there is a difference, and after considerable thought and reflection I think I have determined what it is: tomato sauce. Pizza has it. Flatbread does not. If flatbread has tomato sauce, it is pizza. If pizza does not have tomato sauce, it may still ...

Is this the best pastry ever?

ST. LOUIS - Are kouigns amann the best pastry ever? Rose Levy Beranbaum thinks so, and she is perhaps the most respected baking expert in America. Nathaniel Reid, who is one of the most celebrated bakers in St. Louis, is fond of them, too. "It's one of our most requested items," said Reid, a James Beard Foundation award semifinalist in 2019 and 2020 and owner of Nathaniel Reid Bakery in ... 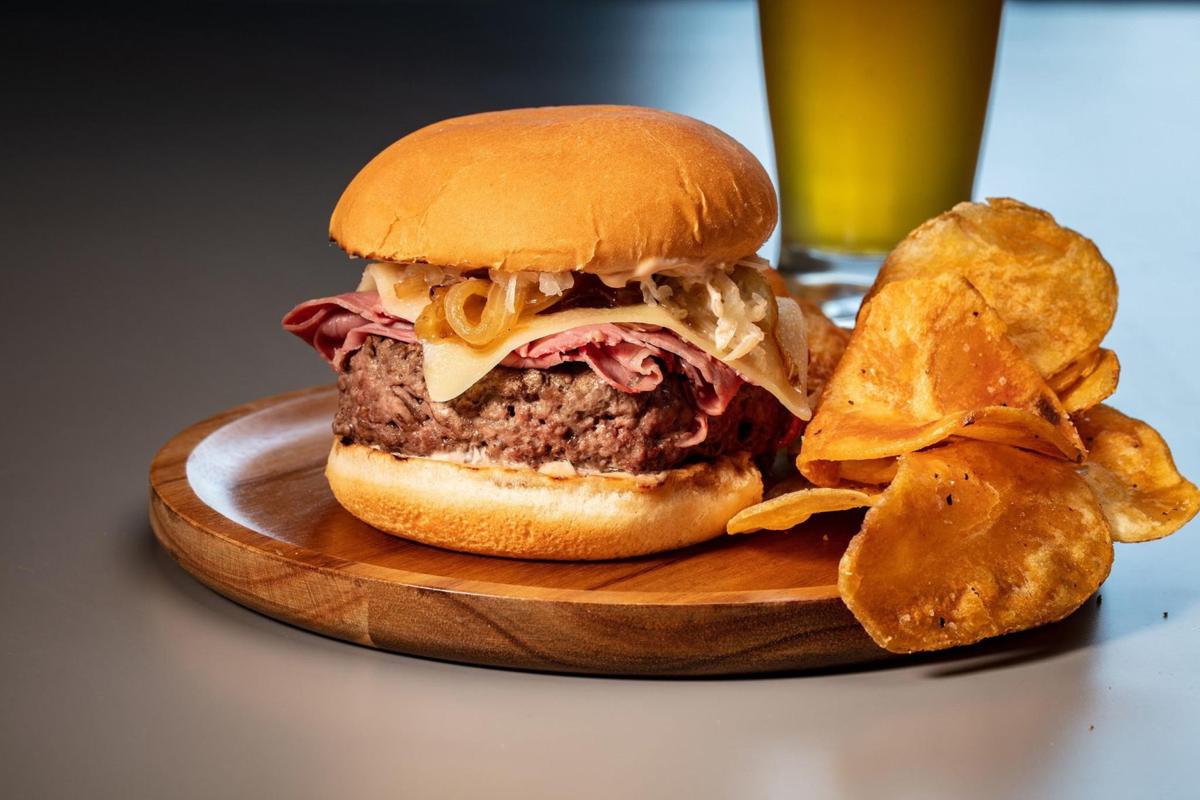 A cheeseburger-corned beef mashup is topped with onions, cheese, sauerkraut and a homemade dressing reminiscent of Thousand Island. 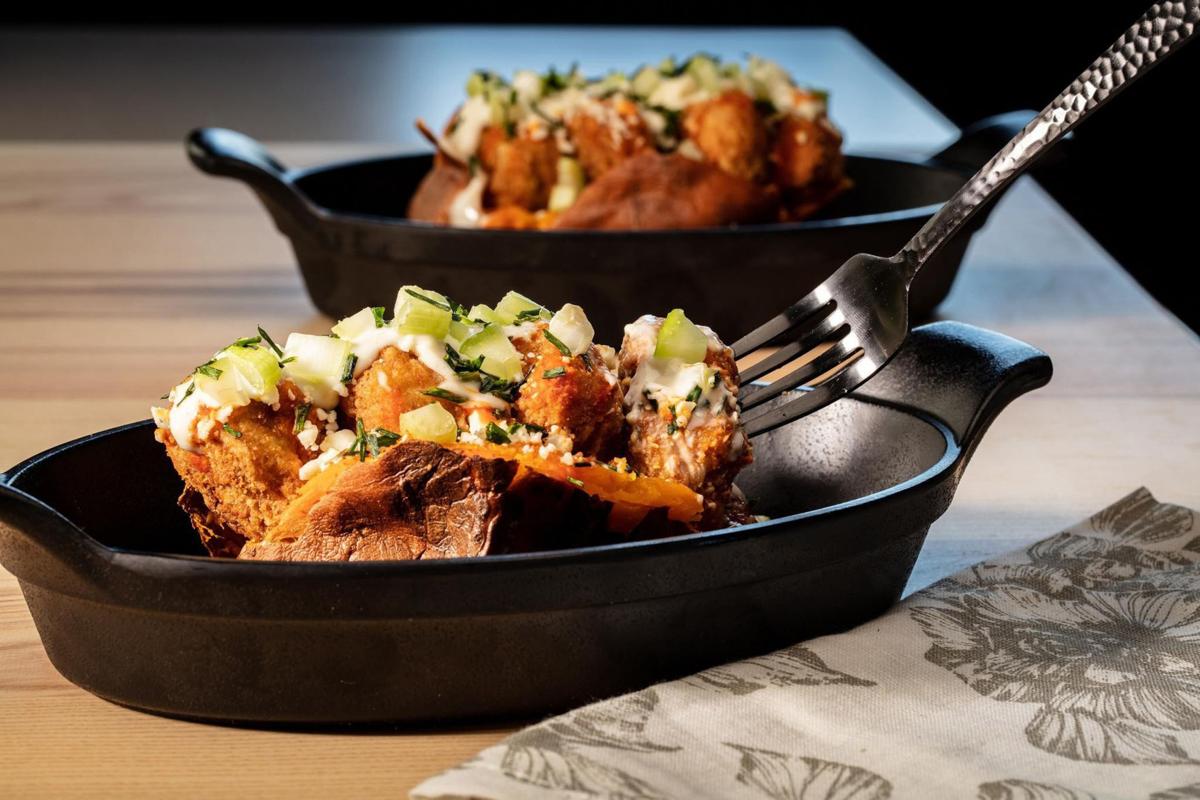