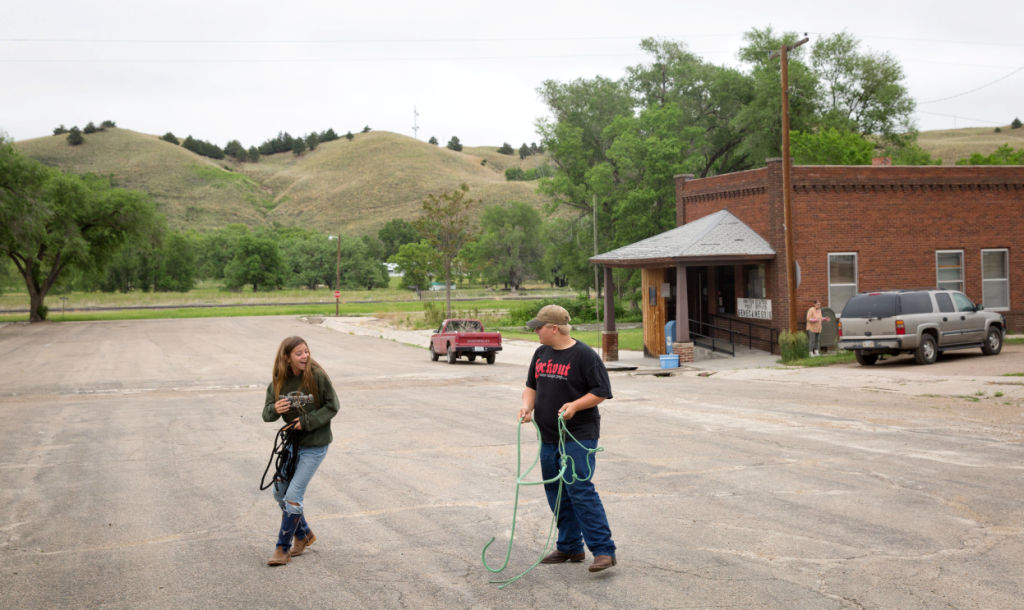 Cheyenne Rebello, left, and Dakota Lewis, both 12, horse around as they head over to get their horses to ride in Seneca, Nebraska. The residents of Seneca voted in May to unincorporate their small town, situated between Mullen and Thedford near Nebraska Highway 2 in the Sandhills. 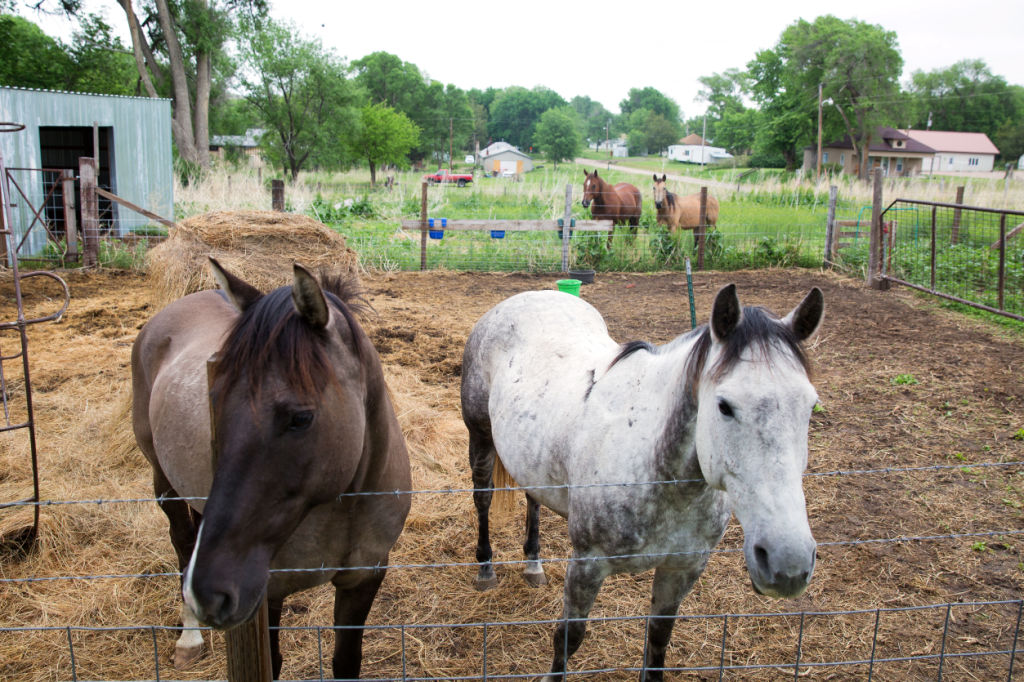 These horses are clean and well-fed now, but last winter, their condition prompted the Village Board to pass a ban on livestock in town. And that spurred the election to dissolve Seneca. 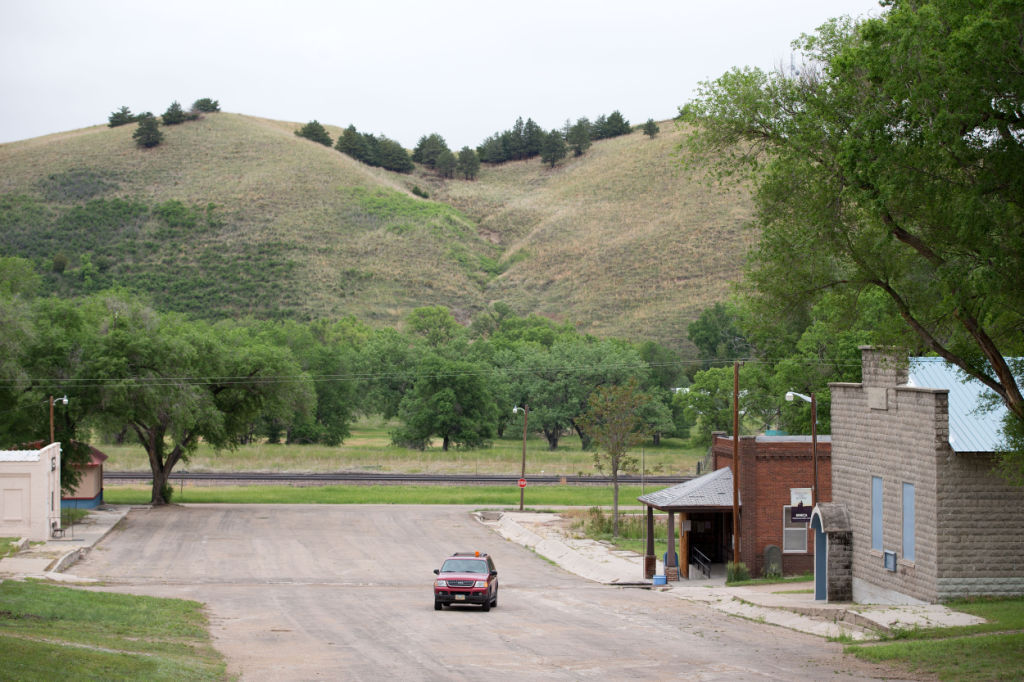 The main street in town features a restaurant that is open on the weekends, a post office and community center.

A little over a decade ago, Seneca residents worked together to create this community center, transforming a shabby old town gymnasium. The Thomas County Board is scheduled to meet July 15 to decide when to turn off Seneca's streetlights and how to dispose of maybe $50,000 in Seneca property that the county inherited, including the community center. 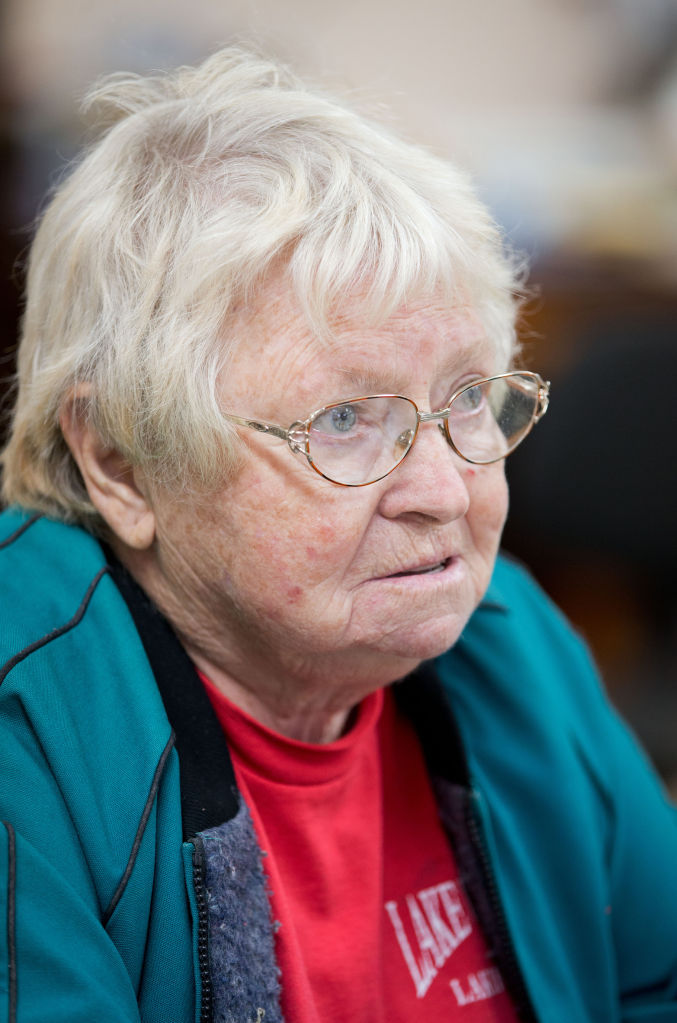 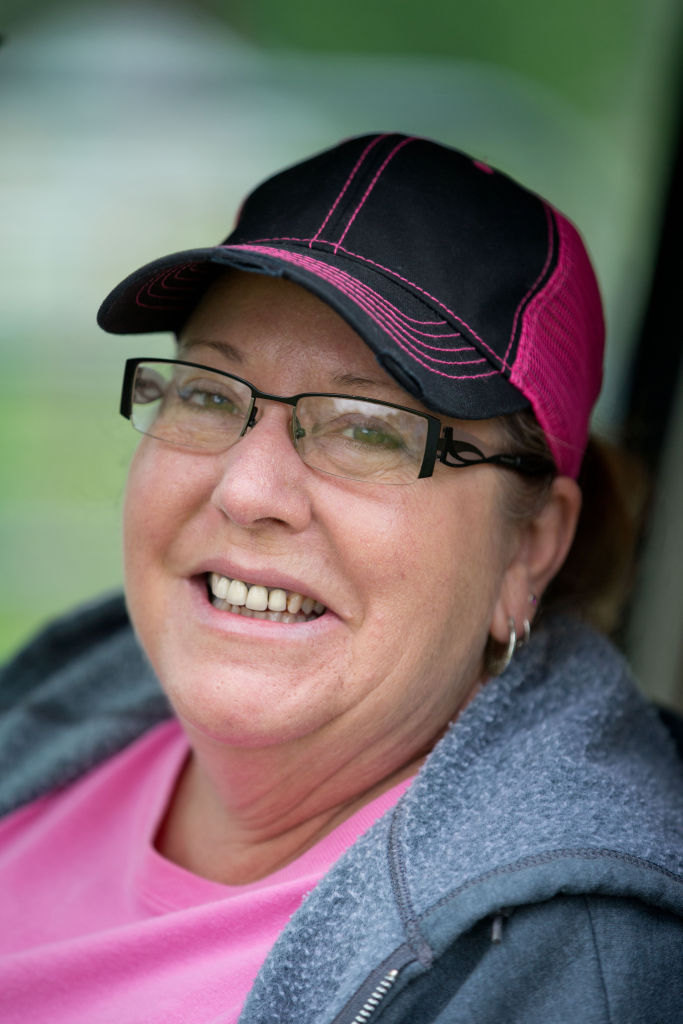 SENECA, Neb. — It feels so long ago now, but the tiny town of Seneca used to get things done.

A little over a decade ago, the people here sold raffle tickets and organized fundraiser soup suppers. They got grants to fix the cracked ceiling, raised money to replace the wrecked windows, donated their free time to redo the bathrooms and refinish the wood floors.

They worked and worked, and after five years, the shabby old town gymnasium reopened as a shiny new community center, a place where people from all over this remote western Nebraska county meet to celebrate big events.

Wedding receptions. Family reunions. Funerals. And, lately, a series of increasingly hate-fueled Village Board meetings that have torn Seneca apart.

Seneca can still get things done, but what it does now is the sort of thing that would make Norman Rockwell shake his head, pack up his paints and speed away down Highway 2.

In May, after a bruising campaign marred by allegations of voter intimidation and fraud, the village’s residents voted — by a single vote — to unincorporate their own town.

That’s right: A Nebraska town voted itself out of existence.

Unless two pending court cases change that outcome, the Village Board will be dissolved. The equipment the village uses to plow its streets and mow its ditches will be sold at auction. The streetlights may go dark. The water may be turned off in the city park.

And Seneca’s beloved community center? Barring unforeseen changes, it will be sold to the highest bidder by Thanksgiving.

“It makes me want to cry,” says Hansen, a longtime postal carrier who now operates a small museum and workshop in Seneca. “What I want to say about it is unprintable.”

You may be wondering why a town would choose to become a non-town.

Let’s start with the horses.

A year or so ago, some residents started to complain about six horses corralled in a resident’s backyard.

Horses themselves are nothing new in Seneca: In the summers here, the children ride horses like they ride bikes in suburbia.

But these particular horses were in too small a space, some people said. They were up to their knees in muck. The horses were in danger, they were sad to look at, and they were a bit of a public health nuisance to boot because they were corralled near a town well.

Larry Isom, a retired physician’s assistant who serves on the Seneca Village Board, decided to do something about the horses.

He and several others called state agencies. They called Thomas County officials. They called the Nebraska Humane Society. People at each of those places told Isom and his allies the same thing: This is an issue for the Village Board.

And so Isom began to mull introducing a town ordinance to ban keeping horses and other livestock within the city limits. The board discovered that an old town ordinance on the books did exactly that — it just hadn’t been enforced in decades. They chewed over the issue at several board meetings, in which Isom says the majority of residents in attendance — though certainly not all — supported a change.

And then the board voted unanimously to ban livestock in Seneca.

That’s when all hell broke loose.

Instead, they circulated a petition in town that called for the unincorporation of that town. They got 13 people to sign it, enough to get it on the ballot.

“We just don’t want people telling us what to do,” says Terri Hartman, a Seneca resident who grew up here, graduated from high school here and now lives with her mother in town. “It was bound to be this and that (from the Village Board). ... We just want to be left alone.”

People who signed the petition think the Village Board and its allies condescended to them after those signatures became public and retaliated when they could. Hartman says she lost her job as a waitress at Cattleman’s, Seneca’s restaurant — a job she held for five years — in part because she signed the petition.

“There has been quite a bit of bullying,” says Hartman. “I love this town as much as anyone. It’s my home, too.”

Bring these bullying complaints to residents who want to keep the town a town, and watch their eyes bulge wide and their cheeks redden. They are trying to preserve a town that is cut into a picturesque valley in the Sand Hills, wedged between the beautiful, winding Middle Loup River and the train tracks that once provided Seneca its jobs.

They are trying to save a town that has existed since the covered wagon.

And they are the bad guys?

“On some level, it’s like, ‘What do you want?’ ” Isom says. “Look, there are speed limits in our world. There are stop signs. There are county laws, state laws, federal laws. Without a shared set of community rules, these rules that we have as a society, what you have is anarchy.

On election night, the residents of Seneca drove their pickups and SUVs to nearby Thedford to cast their ballots. They watched the county and state election websites late into the evening.

One is a felony charge against Jacqueline Licking, the 80-year-old who circulated the petition, alleging that she didn’t witness all the signatures being signed on the petition, as is required by state law.

The other is a request for a delay on the dissolution of Seneca, as county officials investigate whether everyone who voted in the May 13 election was a legal resident of Seneca at that time. Even one incorrectly counted vote could swing the result of the election and keep Seneca a town.

As Seneca waits, many residents on either side of this civil war have simply stopped speaking to each other, which isn’t easy in a town that covers only one-eighth of a mile. When they pass each other in pickup trucks, they do not wave. And when they are among like-minded friends and neighbors, they throw around accusations that would make the most hard-edged D.C. operative squirm.

While in Seneca, I heard people on both sides say the following things about their neighbors: drug addict, drug dealer, welfare queen, verbally abusive, physically abusive, sexually abusive, creep, jerk and much, much worse.

The acrimony fogs everything, making it hard to see what Seneca once had and now what it stands to lose. It makes it hard to see that, even if the community center is sold to someone who gives it back to the local historical society — that’s a potential Plan B if the election isn’t overturned in the courts — and even if Seneca residents figure out how to pay for their own streetlights and plow their own roads, they will still lose something. Maybe they already have.

It reminds me of a miniaturized version of Congress. It reminds me of the worst of modern-day America, a place fueled by fury, where winning an empty argument always trumps the harder labor of searching for common ground. It reminds me that when we do this, we do lose something less tangible, yet still every bit as important as any streetlight or park or community center.

Watch Sandy Hansen on a recent weekday as she walks through her makeshift local history museum on the outskirts of town and talks excitedly to two visitors about the exhibits. Many of these things came from people in town, who before they died gave them to her to make sure they would be remembered.

Here are saddles used by area pioneers in the 19th century. Gray flannel baseball uniforms from the 1930s. Photos of two area brothers, both wounded in the same World War II battle.

And many of these things came from all across the U.S., mailed to her by relatives of onetime residents who figured the town would love these artifacts more than California or New Jersey or Texas could.

Here are old hats and old mugs and yellowed newspaper clippings, all sharing a common history and a common name.

“Some part of me has to believe they did not understand, that they don’t understand,” she says of the people who voted to end Seneca as she walks through this tiny Nebraska town’s history. “Because I cannot possibly believe that they understood exactly what they were doing and still voted.

“I wouldn’t want to think anyone in this town could be that ... wrong.”

The Stones were moved from Turner Park to Elmwood Park in 2007, a decision that, at the time, sparked opposition.

'Nobody wins here': Tiny village of Seneca ceases to exist — and the end comes with last-minute bitterness

Backers of the village's remaining incorporated say the quick dissolution action denied them their day in court.

On Saturday morning, surrounded by his wife and three of his four sons, Dave McNair will play his 1,000th golf course.

Hansen: For some north downtown businesses hoping for a financial windfall — like coffee shop — CWS has struck out

The College World Series is certainly a boon for some businesses, the kind that serve booze and all but exist to serve the CWS fan. But it’s a different story for the businesses that aren’t ready-made to fit the series.

Seneca might very well be a symbol of small - town Nebraska's struggle for survival. Tucked into the Sand Hills about 60 miles south of Valentine, its future seems as daunting as the Dismal River that flows outside town.

Seneca, Nebraska — which voted itself out of existence — featured on latest Radiolab episode

The national attention was sparked by a World-Herald column on the town’s 2014 vote to dissolve itself.

Cheyenne Rebello, left, and Dakota Lewis, both 12, horse around as they head over to get their horses to ride in Seneca, Nebraska. The residents of Seneca voted in May to unincorporate their small town, situated between Mullen and Thedford near Nebraska Highway 2 in the Sandhills.

These horses are clean and well-fed now, but last winter, their condition prompted the Village Board to pass a ban on livestock in town. And that spurred the election to dissolve Seneca.

The main street in town features a restaurant that is open on the weekends, a post office and community center.

A little over a decade ago, Seneca residents worked together to create this community center, transforming a shabby old town gymnasium. The Thomas County Board is scheduled to meet July 15 to decide when to turn off Seneca's streetlights and how to dispose of maybe $50,000 in Seneca property that the county inherited, including the community center. 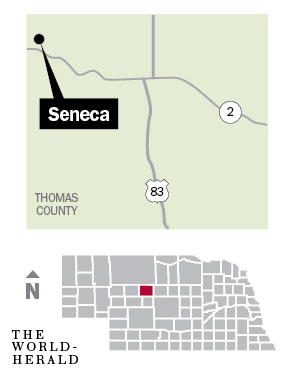 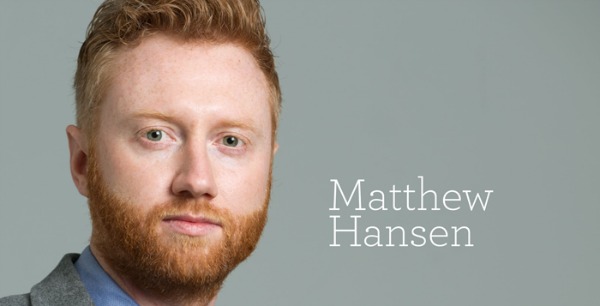