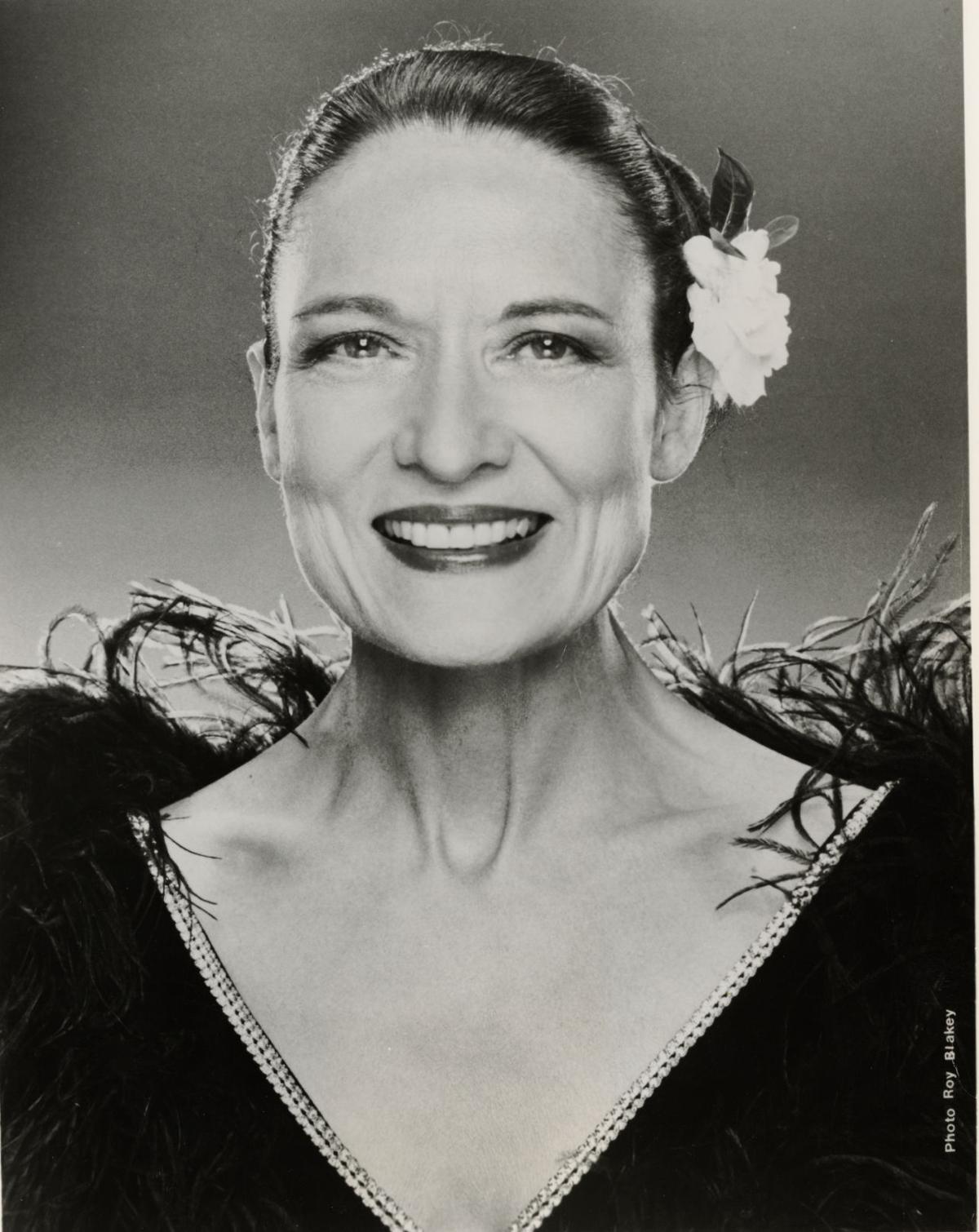 Julie Wilson made her Broadway debut in 1946 in "Three to Make Ready." Her career took off from there. 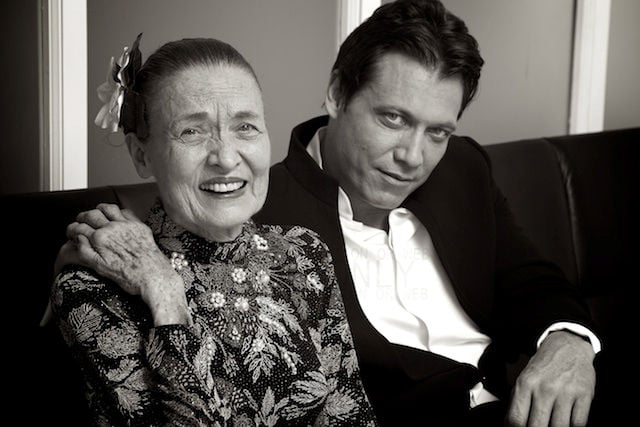 Julie Wilson, the sultry cabaret legend and actress, relished many joyous homecomings to Omaha. Now her son brings her home a final time — mournfully, but also to celebrate her life.

“My mother was a Nebraska girl,” said actor Holt McCallany, “and she loved Omaha.”

So he will bury her ashes at Forest Lawn Cemetery in Omaha at 1 p.m. Friday. Family friends and fans, he said, are welcome.

When the international star died in Manhattan in April, the New York Times called her “the revered nightclub performer widely regarded as the queen of cabaret.”

Even though she was 90, her death from a stroke came unexpectedly. She had become a godmother to the New York cabaret scene, and she was dressed and preparing to attend an awards banquet when she was stricken, dying days later.

“I know it’s hard to think of my being surprised to lose a 90-year-old person,” her son said, “but she had such spirit and enjoyed life to the very end. We had celebrated her 90th birthday in Paris, and I said it was nothing compared to how we would celebrate her 100th.”

Julia May Wilson was born in Omaha on Oct. 21, 1924, to a hairdresser and a coal salesman — Emily and Russell Wilson. At 15, Julie sang with local bands at the old Paxton Hotel and elsewhere, graduated from Benson High in 1942 and briefly attended Omaha University.

She won the title of Miss Nebraska and would have competed in the Miss America pageant, but the mother of the runner-up discovered that Julie was three days short of 18, the minimum age.

She joined the cast of “Earl Carroll’s Vanities” in Omaha and traveled with the show to New York, where she became a chorus girl at the Copacabana and the Latin Quarter. In 1946, she made her Broadway debut in “Three to Make Ready.”

Her career was off to the races. She won a singing contest on a radio show hosted by Mickey Rooney and a gig in Los Angeles, where she met Cole Porter. He offered her a role in the London production of “Kiss Me, Kate,” and she worked in England for several years.

In New York, she often sang at La Maisonette in the St. Regis Hotel, and she continued to perform in nightclubs and road shows, also recording albums and singing on Broadway. She appeared on TV with Jackie Gleason, Ed Sullivan, Johnny Carson and Edward R. Murrow.

Her career was well-chronicled in The World-Herald, especially by the late columnist Robert McMorris, who once described her as “a svelte, sexy glamour girl” but one who also could play character roles.

When she had time, she returned home to sing at such venues as Club 89, the Westroads Dinner Theater and the Twenties, where owner Tony Greco labeled her twice-nightly show as “the most successful one this club’s ever had.”

And then, in 1976, she performed at the Orpheum and moved back to Omaha for seven years. Divorced from producer Michael McAloney, she previously had sent sons Holt and Michael to live with her parents at their Omaha home, 1503 N. 54th St.

Holt, now 51, is an accomplished actor with an impressive, still-expanding filmography. He just finished filming “Jack Reacher 2” with Tom Cruise and is working on Clint Eastwood’s “Sully” — about heroic airline pilot Sully Sullenberger — with Tom Hanks.

But as a youngster, Holt said, he was rebellious.

“I was expelled from Creighton Prep as a sophomore,” he said, “and ran away to Los Angeles to pursue an acting career.”

He was sent instead to school in his father’s native Ireland before returning to Omaha and successfully “begging” the Jesuits to allow him back into Prep. He graduated a year behind Alexander Payne, now a two-time Oscar-nominated filmmaker.

McCallany — a name changed from his father’s spelling and pronounced Mc-CAL-uh-nee — auditioned in recent years for Payne’s “Nebraska” and said he would love to work for the famed director-screenwriter, who still has a home in Omaha.

In 1983, after her parents had died and her sons were out of school, Julie Wilson returned to New York at 59 for a triumphant stage in her career. Among other places, she sang at The Algonquin in Manhattan and at clubs in Chicago and Los Angeles.

“The rail-thin Ms. Wilson, her hair pulled back, a gardenia tucked behind one ear, cut a striking and elegant figure onstage in clinging custom-made gowns usually augmented by a feather boa,” critic Stephen Holden recalled in the Times obituary. “As she wove her spell, performing standards from the American songbook in addition to humorously racy material, she was by turns naughty and intense, digging so deeply into the lyrics she sang that she seemed to be living them.”

In 1988, she received a Tony nomination for “Legs Diamond.”

In 1991, son Michael McAloney Jr., a Golden Gloves boxing champion when in Omaha, died in Kansas City. Holt said the cause of death was never determined. A second autopsy paid for by the family noted a trace of cocaine, though not enough to kill him.

Mike’s death hit his mother hard. But she continued singing for years, and in 1999 a Julie Wilson Award was created for an annual cabaret convention.

Into her 80s, the thrice-divorced Wilson often sang her signature, “I’m Still Here.” Her last memorable show came at the Metropolitan Room in 2008, but she continued attending events and encouraging younger singers.

At Manhattan’s Iridium Club in 2013, a Tribute to Julie Wilson brought together numerous voices. The program described her as “a supreme artist with the uncanny ability to convey the emotional intention of a song musically and lyrically.”

Holt maintained a close relationship with his mother, he said, and lived with her in Manhattan the past 12 years. He began filming a documentary of her life and career and staged an elaborate show at a Paris jazz club for her 90th birthday party. She also was honored at the Lincoln Center in New York.

The documentary might be released in six months. Holt didn’t intend for it to be in memoriam, but she died on Easter. And now at Thanksgiving, he returns to Omaha to meet with friends and relatives, including the family of a cousin, Dr. Scott Wilson.

In addition to his mother’s ashes, Holt will bury his brother’s in the family plot in Omaha.

“It’s an opportunity for me to reconnect with Omaha, where I spent my boyhood, and to see family and old friends,” he said. “I know what a beautiful city Omaha has become.”

He is pleased to bring the queen of cabaret back home.

Kelly: For 25 years, Madrigal Christmasse Feaste has revived the Renaissance

The Madrigal Christmasse Feaste is sure spelled funny — but that’s not all that brings a smile to the show that next week celebrates its 25th year.

Schlegel, 72, led Creighton from 2000 to 2011, then joined the pastoral team at the Church of the Gesu, serving Marquette University in Milwaukee, and was also a chaplain for the health sciences at Marquette.

Kelly: Ignore it or love it, but Omaha is on the map

Some outside "reviews" of our town: The Wall Street Journal called Omaha “one of the nation’s biggest success stories,” but a New York TV reporter said the great thing about Omaha Steaks is that you don’t have to go to Omaha to get them.

Rick Lienemann of Omaha, who worked on the project for the Remembering Our Fallen group, said the moms and kids were touched by the Spartans’ notes. Said one: “Your dad was a hero.”

No, I’d never worn a kimono, but citizens of Shizuoka kindly dressed my wife and me — and a number of other Omahans — in the traditional Japanese garb.

Julie Wilson made her Broadway debut in 1946 in "Three to Make Ready." Her career took off from there.