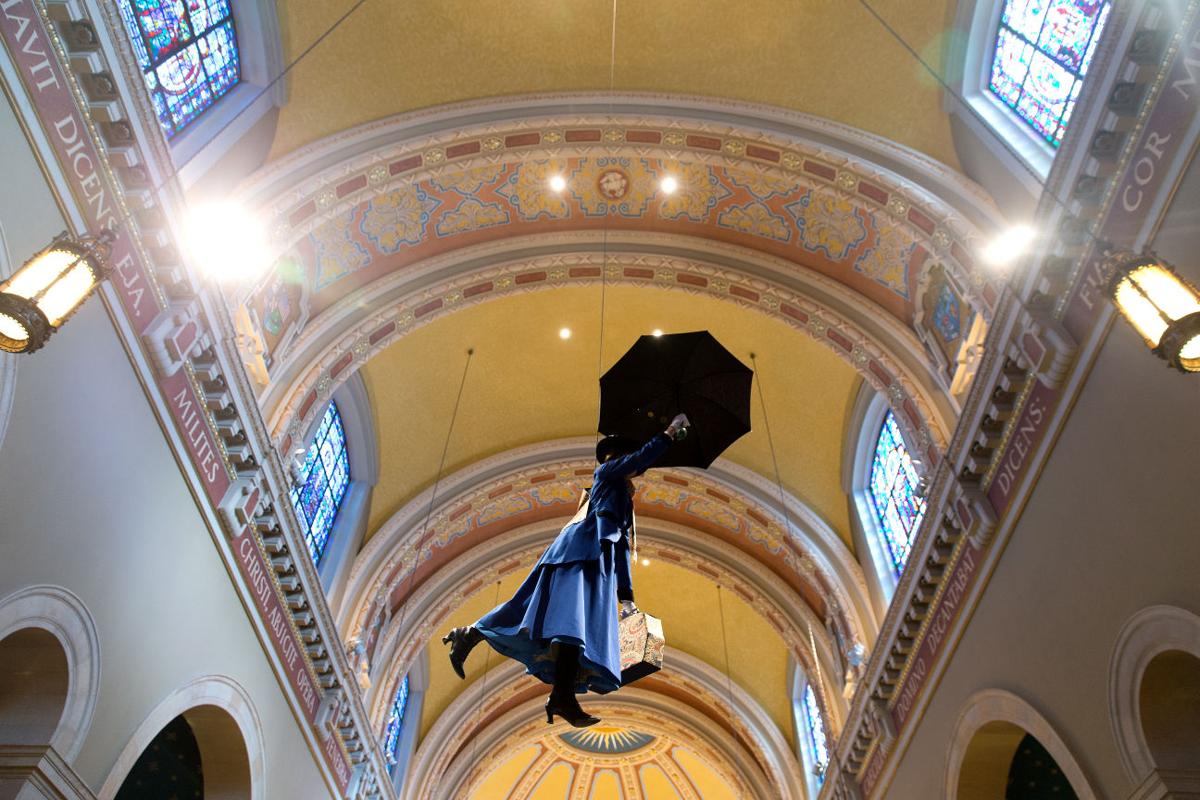 A Mary Poppins mannequin hung from the ceiling at St. Cecilia Cathedral for its 31st annual flower festival, but a custodian used bolt cutters to send it crashing to the floor on the first morning of the event. The custodian said he hopes the incident sparks “conversation” about what types of displays are appropriate in a church. 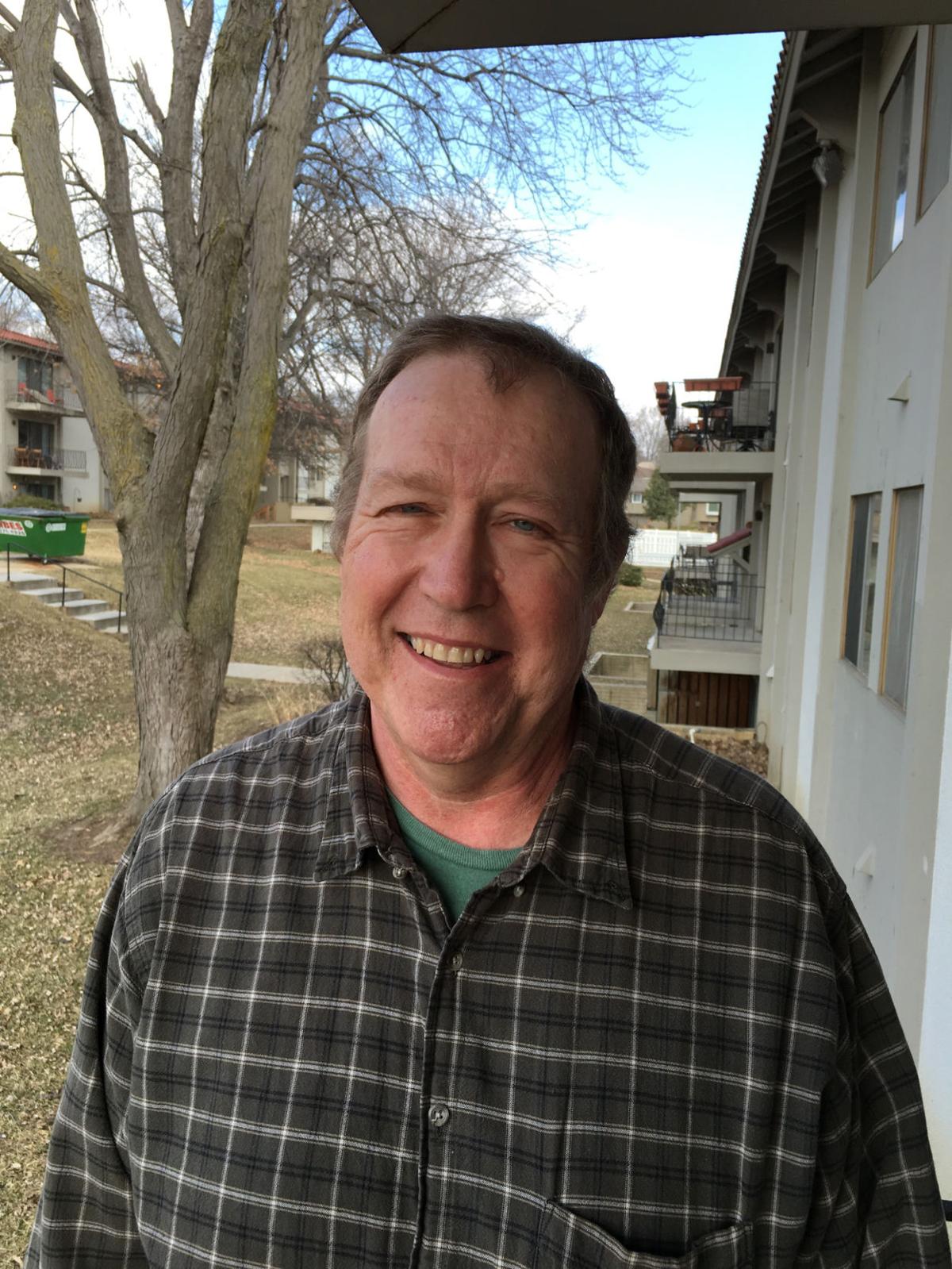 On the first morning of the 31st annual Cathedral Flower Festival, with its theme of “A Night at the Movies,” an agitated church custodian made a bold move.

Mark Kenney, 59, who grew up in the parish, had worked at St. Cecilia Cathedral for three years. Around 8 a.m. on Jan. 29, he went to a work shed, picked up a pair of heavy-duty bolt cutters and ascended to a catwalk high above the mostly empty nave, or main sanctuary.

He looked through a peephole, he said, to make sure he wouldn’t hurt any people. And then he cut a steel cable, which sent a suspended, umbrella-carrying, hat-wearing Mary Poppins figure crashing to the floor.

Someone alerted the pastor, the Rev. Michael Gutgsell, who ran from the rectory next door to the church and saw Kenney.

“Father, it was me. You need to call the police.”

Gutgsell had known that his custodian had misgivings about secular displays in the church but says he was dumbfounded and didn’t understand why Kenney would take such drastic action. In a brief meeting that week, the pastor said, he had asked for Kenney’s promise not to be disruptive.

Now the priest was shocked, saying, “You promised!”

In response, Kenney said, he lashed out. “I started screaming, ‘Father, this is bullshit! We can’t have this in the church. This isn’t culture, it’s Disney crap!’ ”

Kenney — who has served three terms of up to six months in federal prisons for crossing security lines at military bases in protest of nuclear weapons — then knelt at the communion rail and prayed until officers arrived and handcuffed him.

He spent a night in jail before he was bailed out and pleaded no contest. He said he is scheduled for sentencing “on Holy Thursday,” March 24.

Damaging items at the flower festival was wrong, and Kenney said in an interview this week that he will make restitution. But he says secular items such as movie characters are inappropriate in the sacred space of the cathedral and amount to sacrilege and idolatry.

Gutgsell, a former chancellor of the Omaha Archdiocese and a Catholic University-licensed “canon lawyer,” an expert in church laws and rules, disagrees.

“Obviously, context is everything,” the priest said, noting that the cathedral also is home to about six concerts a year. No sacrilege or disrespect is conveyed, he said, in the concerts or the dozens of exhibits at the flower festival.

“Cathedrals,” he said, “are kind of the epicenter for culture presentation and development.”

Eileen Burke-Sullivan, a theologian and vice provost for mission and ministry at Creighton University, said she sees no problem. The cathedral and the archdiocese, she said, have supported the arts in Omaha for many years.

“In mixing thematic popular culture with the beauty of God’s creation in flowers,” she said, “I don’t think there’s any inherent idolatry.”

The flower festival is produced by the nonprofit Cathedral Arts Project. Its founder and director, Brother William Woeger, each year informs the archbishop of the theme.

Archbishop George Lucas was out of town this week and unavailable for comment. But spokesman Tim McNeil, the current chancellor, said the archdiocese will review the festival to make sure it is staying within bounds.

He said he sees nothing in “the broad language” of the catechism that would preclude such displays as Mary Poppins being suspended from the ceiling of the cathedral. But he said it would be good to know more specifics in advance.

Kenney’s actions aren’t the reason for a review, he said, adding that he has heard of no other complaints.

“The flower festival is evolving,” McNeil said, “and there are other types of props — mannequins and figurines. Everything has to be given a careful look.”

Woeger said next year’s theme is the 150th anniversary of Nebraska’s statehood. About 10,000 people attended this year, and he said volunteers had to scramble to repair the damage Kenney inflicted.

“I learned three years ago that he didn’t approve of the flower festival,” Woeger said. “It creates an awkward situation when you’ve got someone walking around negatively in the middle of what’s going on. It’s a big stretch to do $6,000 in damage and say you just wanted to make a point.”

Kenney won’t be walking around there anymore, at least not on the job. He was fired, and his archdiocesan “safe environment” certificate was revoked, meaning he no longer can work or volunteer when children are present.

So who is Mark Kenney?

He grew up fourth in a family of eight children, graduated from Creighton Prep in 1975 and attended the University of Nebraska at Omaha for two years.

He signed on for six years in the Navy but served only four. He worked as a mechanic in the nuclear program, but then saw actual missiles and believed they were immoral. He went AWOL several times, he said, and spent time in the brig before receiving an honorable discharge that cited his “unsuitable eccentricities.”

Kenney returned to Omaha and has worked blue-collar jobs, including the $12-an-hour position that he lost at the cathedral. He now is a custodian at a nursing home. His wife of 32 years is a pharmacy technician, and they care for her 62-year-old sister, who has mental disabilities.

In a letter of termination two days after the festival incident, Gutgsell wrote to Kenney: “None of the florists and none of the volunteers, any number of whom took time off their work or traveled some distance, had the slightest intention or reason to dishonor the Cathedral. You assigned the word ‘desecration’ to the entire project and as a result slandered anyone associated with it.”

Dwayne Ibsen, who provided the costumes, said Kenney tossed out an “Elizabeth I” outfit that had won six awards at national costumer conventions. Insurance companies are assessing the damage to mannequins and costumes, Ibsen said, adding that it appeared to be between $5,000 and $6,000.

“None of it was his property, and he went through it like a streak of lightning,” Ibsen said. “It was a beautiful show, and nothing was inappropriate.”

Kenney, who said he confessed his sin to a priest at another Catholic church, feels “closer to God than ever.” He could have handled things differently, he said, and recalls walking through the cathedral in the immediate aftermath and thinking, “What did I do now?”

But he says he is at peace with it, and in a letter to the archbishop objected to “pop art” and “absurd, secular cultural icons” in the cathedral.

Kenney hopes that people who agree with him will speak up and that the incident sparks “conversation” about what is appropriate in a church.

One thing that’s not appropriate is damaging the property of others. If Mark could have spoken with Mary Poppins, she’d have advised him to make his strongly held point with a spoonful of sugar — not with a bolt-cutter and rage.

Custodian Mark Kenney's story, told in this column last Friday, was picked up on various religion-related websites and blogs. A number of readers supported him, agreeing that it was inappropriate to show such secular objects, including a Mary Poppins mannequin, in the church.

It’s on an appropriate day, April 1, and lots of April foolishness will delight the audience with song parodies, dance, costumes and repartee on the bridge of the Enterprise.

Jane Goodall commented in Omaha, just before speaking to 2,000 nine days ago at a full Holland Performing Arts Center. The next morning, she headed west for a five-night stay at the cabin of a friend, wildlife photographer Tom Mangelsen.

“I can understand your motives, sir,” the judge told Mark Kenney. “But not your actions.”

Kelly: At 'All the President’s Men' screening, students see journalism at its watchdog best

Investigative journalism wasn’t invented in the 1970s, but the scrutiny that grew out of Vietnam and Watergate changed how people looked at government. “All the President’s Men” helped underscore the value of basic, hard reporting.

The hope for Girls Inc. is to create more space at the CenturyLink Center, possibly for 1,000 more people at a discounted price. Video screens will give everyone a closer view of Malala Yousafzai, who was 17 when she became the youngest person to receive the Nobel Peace Prize.

A Mary Poppins mannequin hung from the ceiling at St. Cecilia Cathedral for its 31st annual flower festival, but a custodian used bolt cutters to send it crashing to the floor on the first morning of the event. The custodian said he hopes the incident sparks “conversation” about what types of displays are appropriate in a church.