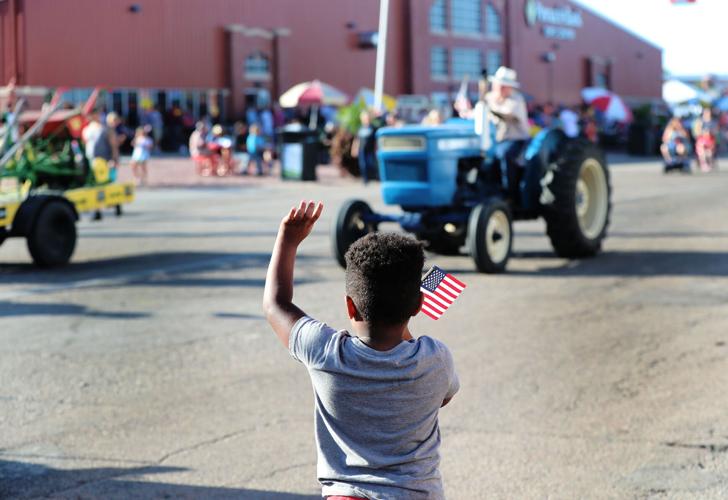 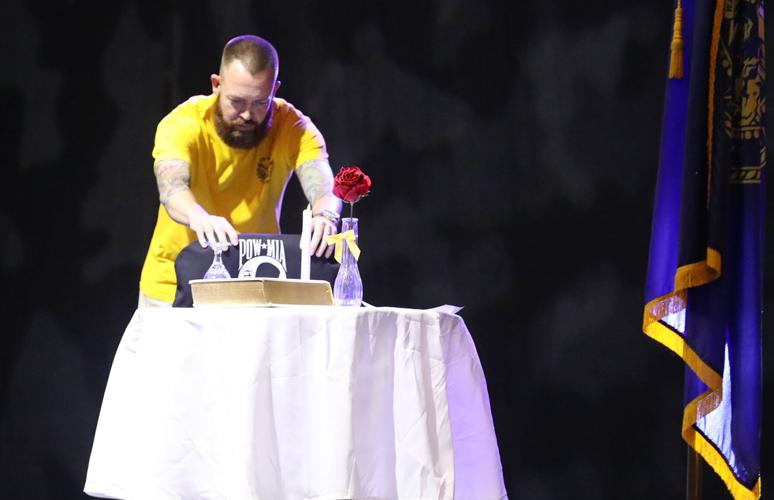 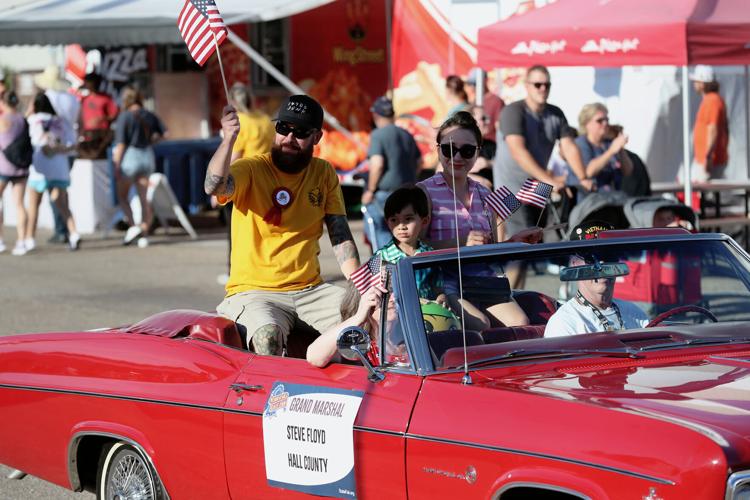 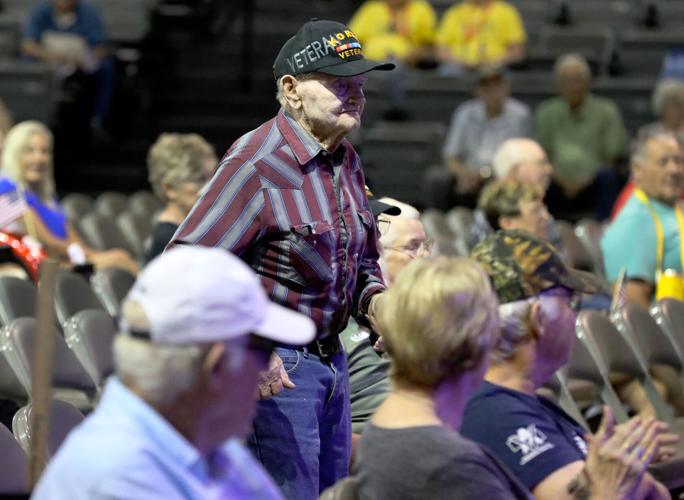 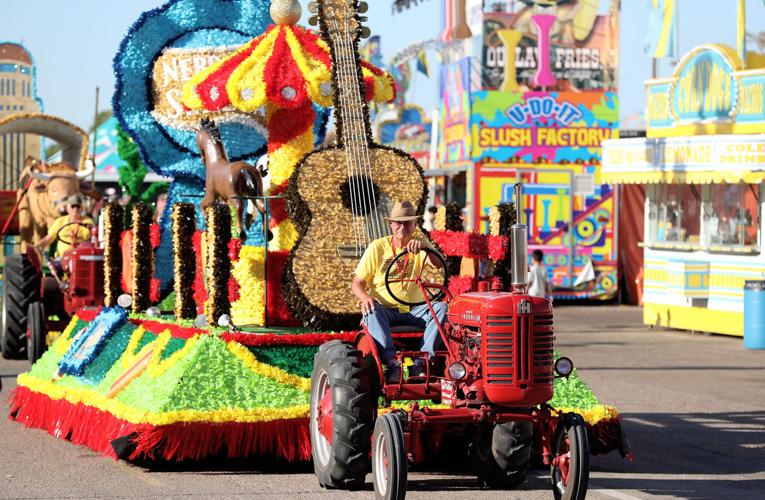 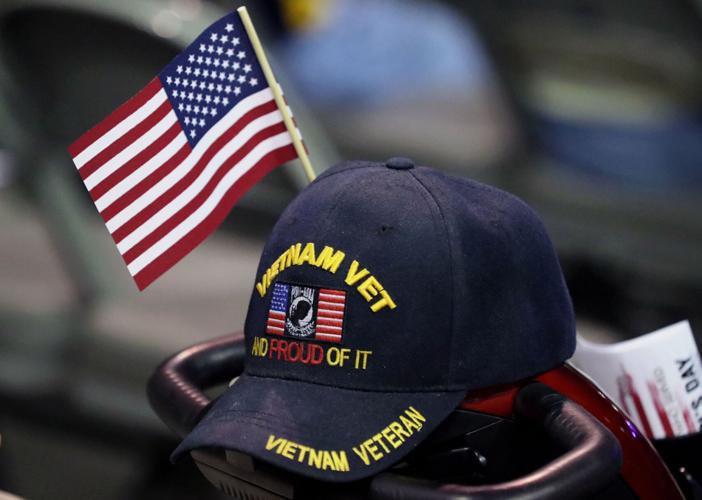 The day was capped by a program for veterans followed by a parade.

“You’re all heroes,” program host Ed Meedel, a local Navy Vietnam veteran, told the crowd of about 400 people at the Heartland Events Center at the Fonner Park Complex in Grand Island. “No one can take that away from you the rest of your lives.”

The Nebraska State Fair Veteran’s Day celebration program featured a rendition of the national anthem and musical program from recording artist Eli Mosley, along with colors presented by the United Veteran’s Club of Grand Island honor guard, prayers from a military chaplain and tributes to prisoners of war, missing in action military members and those that lost their lives.

Steven Floyd, a retired naval chief from Grand Island, gave the keynote address, discussing the meaning of freedom. Asked about it, Floyd said he realized he didn’t have a clear answer.

He discussed the definition with a variety of military friends and confidants in his quest toward a working definition.

“Live life and chase your dream of freedom,” he told the gathered. “Too many of us are out there not pursuing freedom. ... We should exercise the choices freedom provides.”

“I am proud to be free and proud to have served,” Floyd said in closing.

Outside the center at a 28-foot mobile veterans unit, officials with the Veterans Administration hospital system, the Nebraska Department of Veterans Affairs and other agencies spoke with fairgoers about health care benefits, counseling services and a slew of other benefits and services offered veterans.

“Whatever type of benefits they’re asking for,” said David Conrad of Omaha, outreach coordinator in the region for VA. “Helping veterans get appointments, straighten out some issues they may have had. They’re just walking right up to us today.”

“We’ll work anywhere. We’ll go to poker runs, American Legion speaking events,” gun shows, health fairs, college events, craft shows, “a lot of county fairs,” Conrad said. “Wherever we think there could be a veteran. We go to the community and find them. And there’s a veteran everywhere we go.”

For a small number of people, news of Queen Elizabeth's death triggered memories of her brief trip to Nebraska in 1984.

Ted Carter, a retired vice admiral and 1981 alumnus of the United States Naval Academy, was one of five recipients this weekend of the academy’s Distinguished Graduate Award.

VFW Post 10785 is inviting local veterans to come help or watch them repaint the tank at the Eastern Nebraska Veterans Home on Monday, Sept. 1…

A small crowd gathered Friday for the POW/MIA Recognition Day ceremony at Omaha’s Memorial Park. Multiple speakers pledged to never forget those service members who never made it home.

Military recruitment in Nebraska, across nation falls short of goals

Military recruitment nationally is in freefall and the woes are being felt at home. The Nebraska Army National Guard has only recruited about 53% of its goal for the fiscal year ending Sept. 30.

A judge ruled the Air Force violated the law when it revoked a job offer to David Bighia, of Bellevue, because of a medical condition. Now facing foreclosure, he has yet to receive any money.

A unique Nebraska Air National Guard unit based at Offutt Air Force Base is doubling in size and mission, senior Nebraska governmental and mil…

Fifty men and women serving in the 1057th Military Police Company reunited with families and friends Saturday, Aug. 20, after a deployment to …

Registration is open for Husker Fans Salute the Troops weekend

The Husker Fans Salute the Troops Foundation hosts a weekend of praise, pampering and preparation to about 100 military families each year.