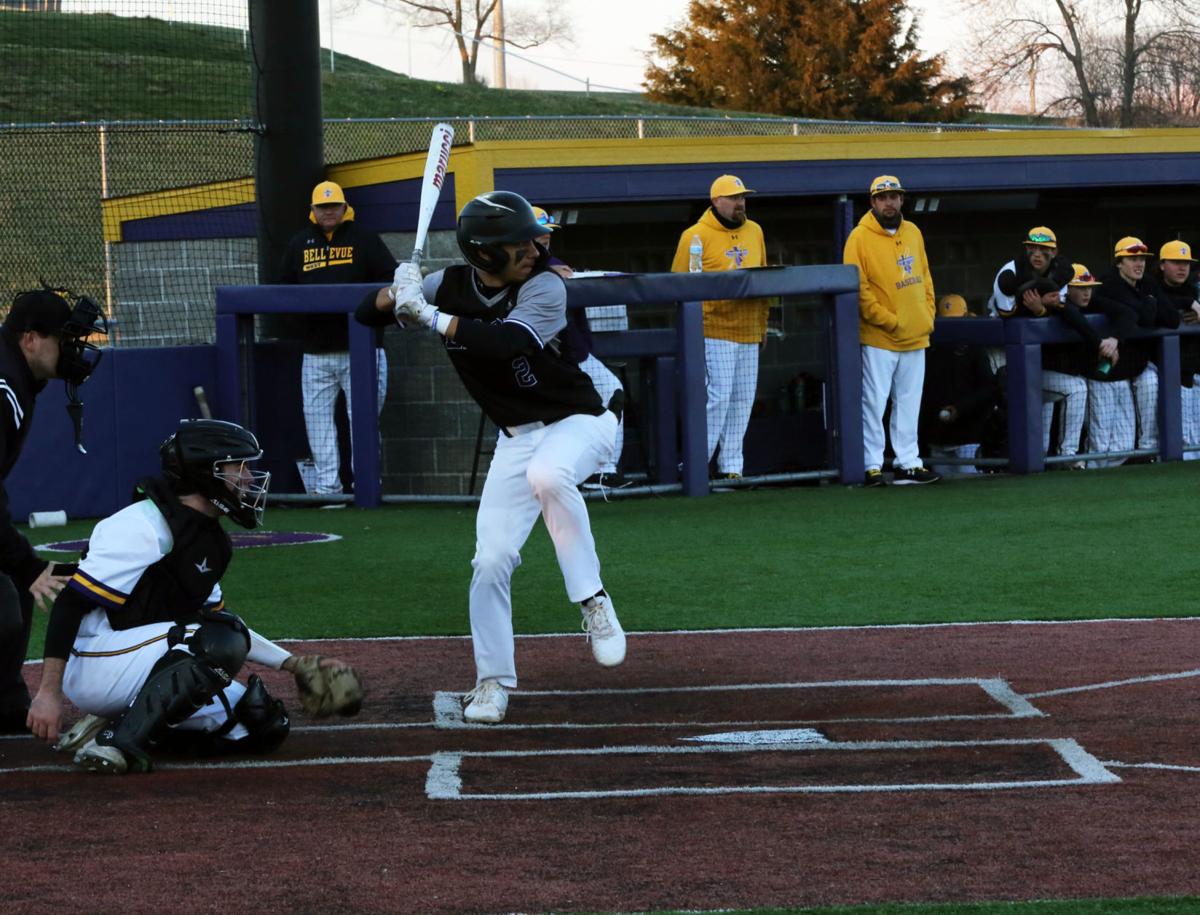 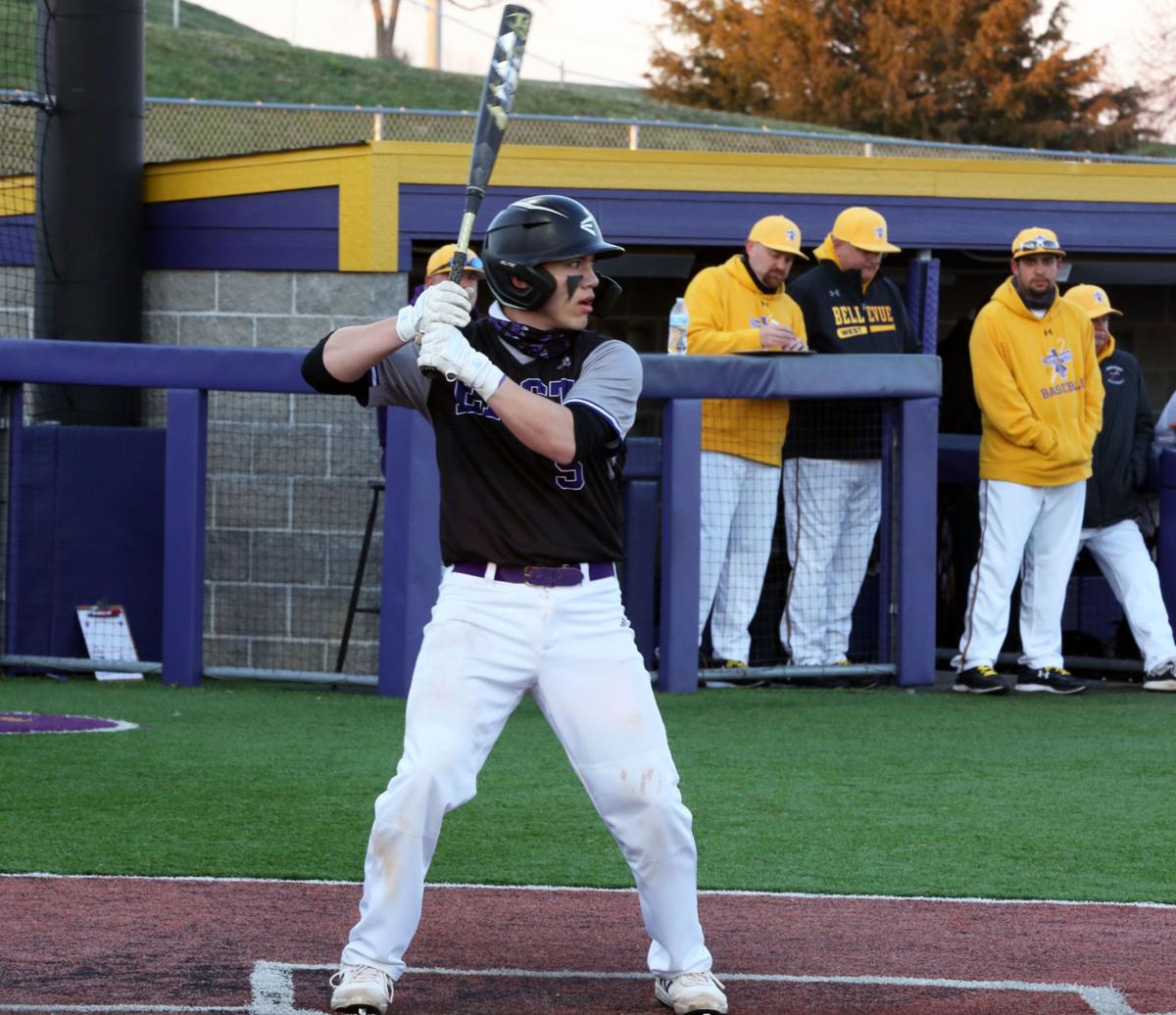 Bellevue East's Jason Bishop (#5, black) in the box waiting for a pitch against Bellevue West on Saturday, Mar. 27. 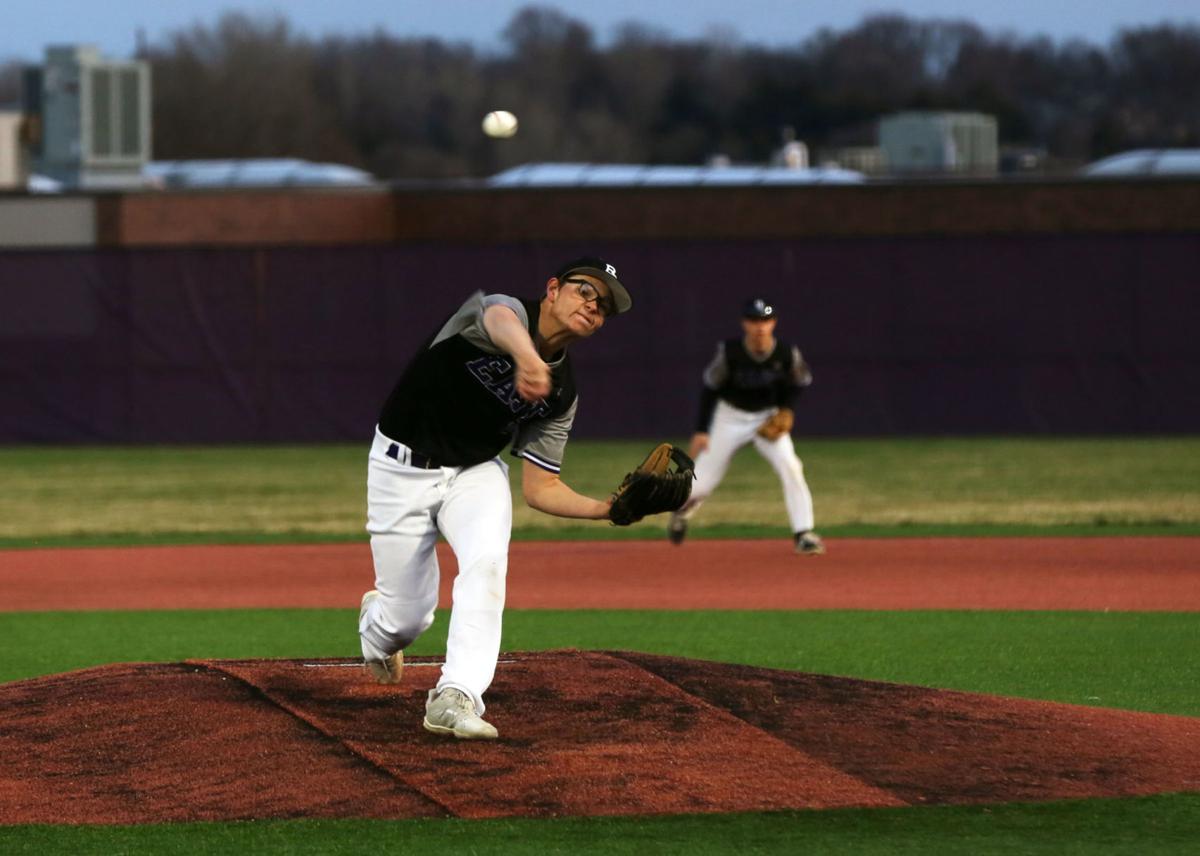 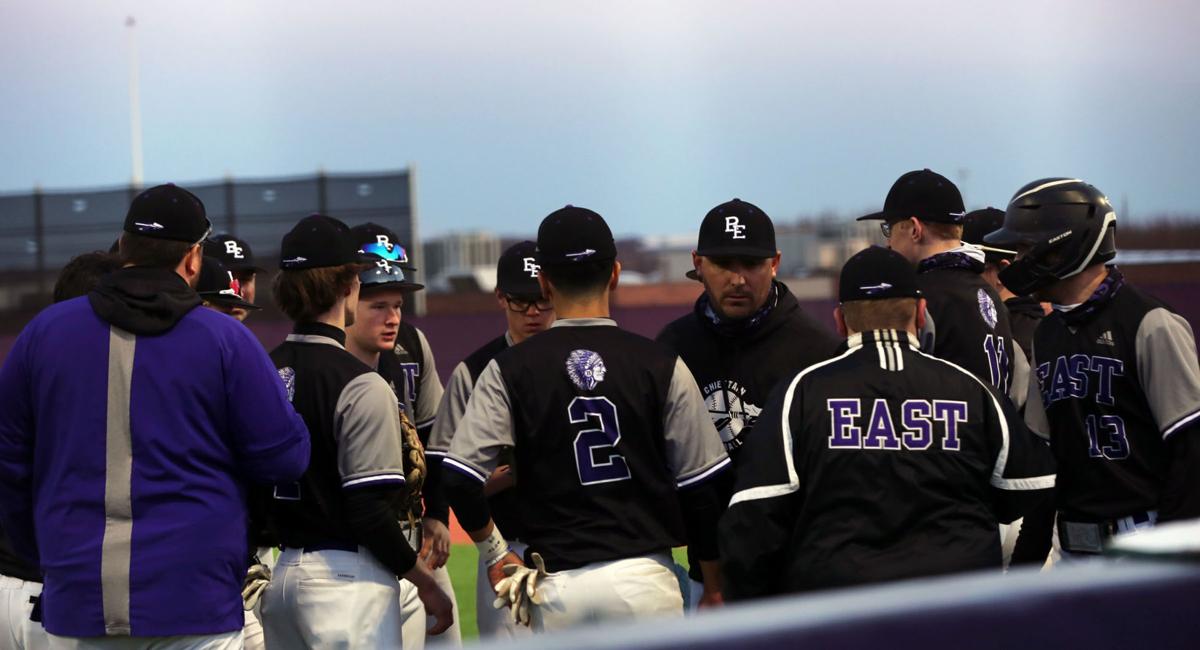 Bellevue East huddles up during their matchup against Bellevue West on Saturday, Mar. 27. 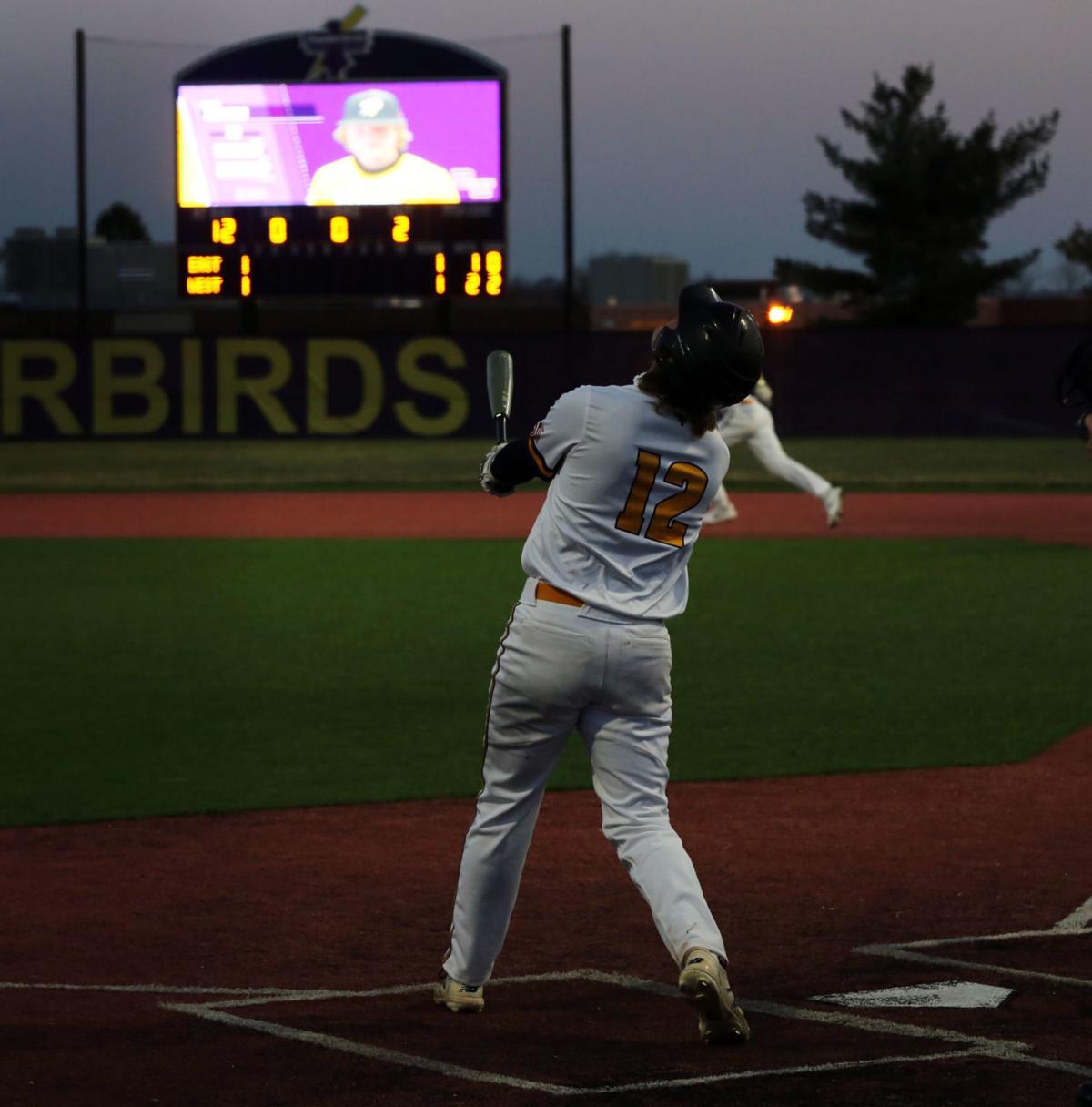 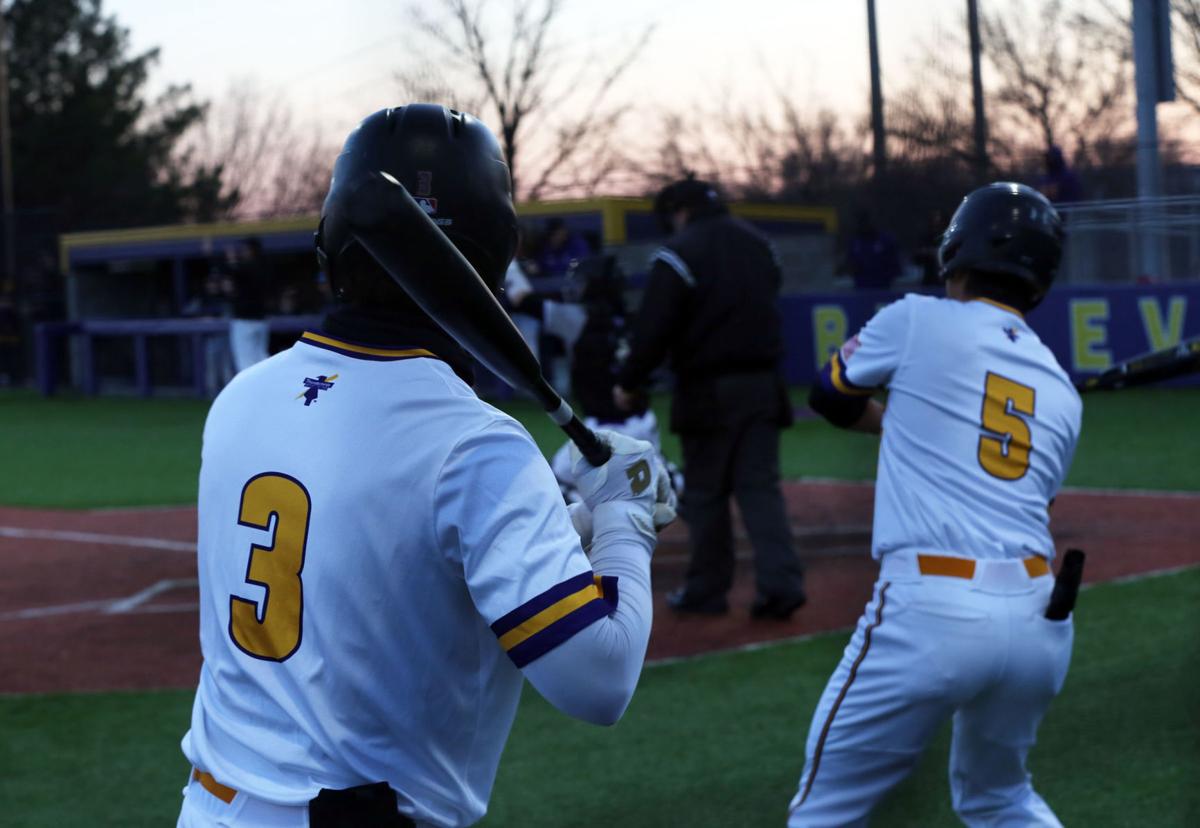 Bellevue West batters get warmed up before stepping to the plate in Saturday night's Battle of Bellevue on Mar. 27. 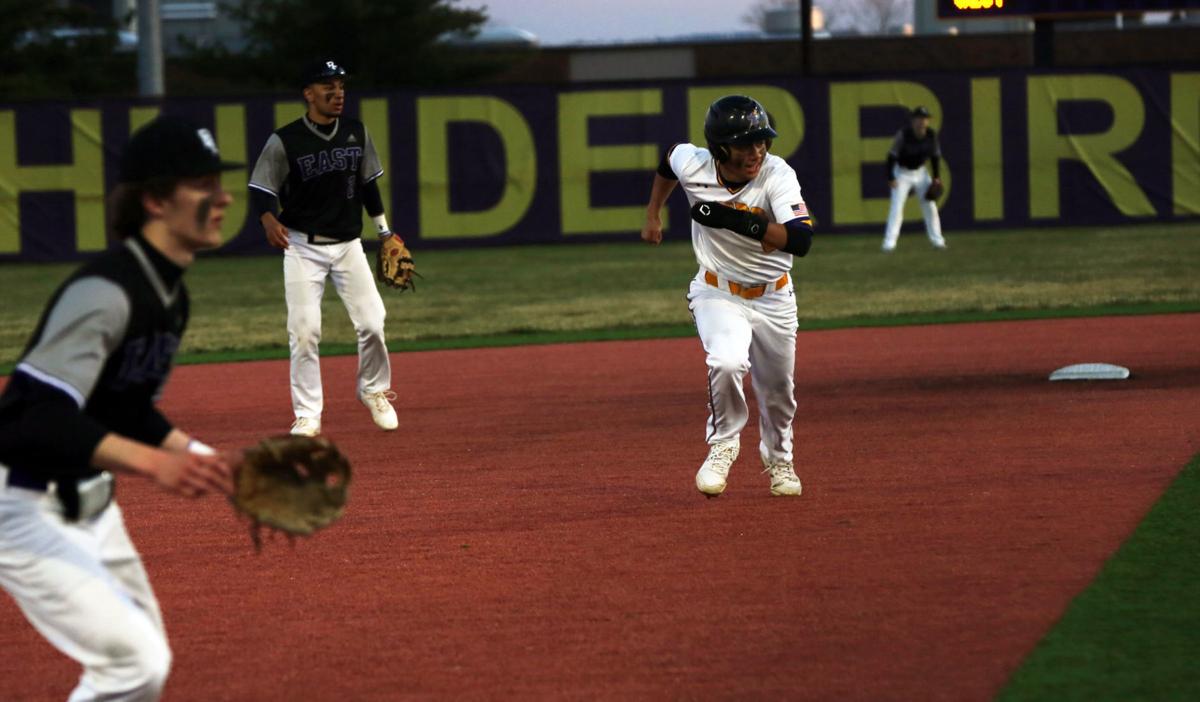 Bragging rights were on the line Saturday night, March 27, when the Bellevue East Chieftains took a short bus ride to Bellevue West in hopes of upsetting the cross-town rival Thunderbirds on their own diamond.

Bellevue West entered the historic matchup with a 4-1 record on the season thus far, falling only to Millard North on Thursday, March 25. Their sole loss came in extra innings, something the T-Birds are familiar with after grabbing two wins over Ralston and Columbus this past week in extras.

Bellevue East on the other hand is coming off their first win of the season after beating Omaha North at home on Thursday, March 25, 9-7. The Chieftains’ earlier scheduled games in the week against Millard South and Millard West were postponed due to rain.

T-Bird senior Gage Allen got the start on the bump Saturday night and wound up dealing for four complete innings, only allowing one hit on zero earned runs while striking out five. Allen also went two for three at the plate with a double, two RBI’s and one run.

The Thunderbirds rallied immediately after in the bottom of the third as Bellevue West answered with three runs to give themselves their first lead of the night, 4-2. Behind the likes of Allen, Carson Wright and Jack Bland, the T-Birds knocked in seven runs in the bottom of the fourth to take a commanding 11-2 lead.

Bellevue East managed to score one more run in the top of the fifth to show some life but Bellevue West answered yet again. One run in the bottom of the fifth and sixth would prove enough as the T-Birds won the Battle by a score of 13-3 after six innings. Bland finished two for three with two runs and three RBI’s while Wright went four for four with a double, three RBI’s and two runs.

After the win Bellevue West has improved to 5-1 on the season with upcoming matchups against Omaha Bryan on Monday, March 29, and Omaha South on Wednesday, March 31. The T-Birds are seemingly favorites in both games but will face-off with a title-hopeful in Creighton Prep on Friday, April 2.

Bellevue East falls to 1-4 on the season following the loss, their next game is against the Gretna Dragons on Monday, March 29. The Chieftains will follow up with games against Omaha Northwest on Wednesday, Mar 31, and Bennington on Thursday, April 1.

Freshmen students at Ralston High School are about to get a helping hand from a Freshman Success Coordinator.

Bellevue West High School is no stranger to accolades.

Bellevue East's Jason Bishop (#5, black) in the box waiting for a pitch against Bellevue West on Saturday, Mar. 27.

Bellevue East huddles up during their matchup against Bellevue West on Saturday, Mar. 27.

Bellevue West batters get warmed up before stepping to the plate in Saturday night's Battle of Bellevue on Mar. 27.