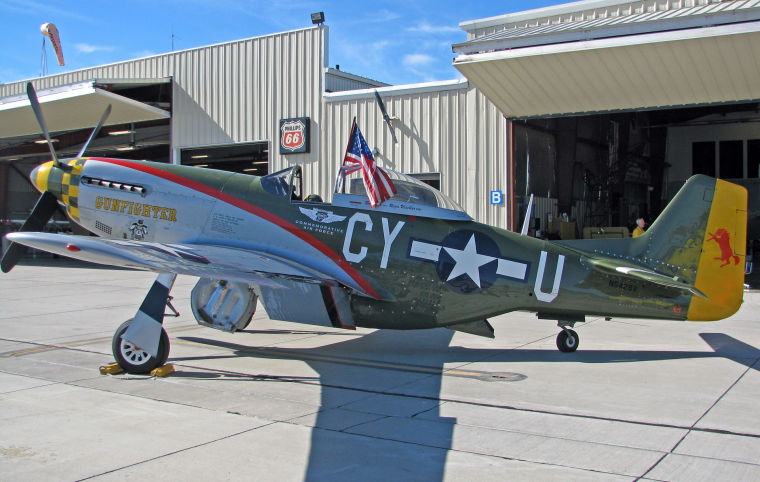 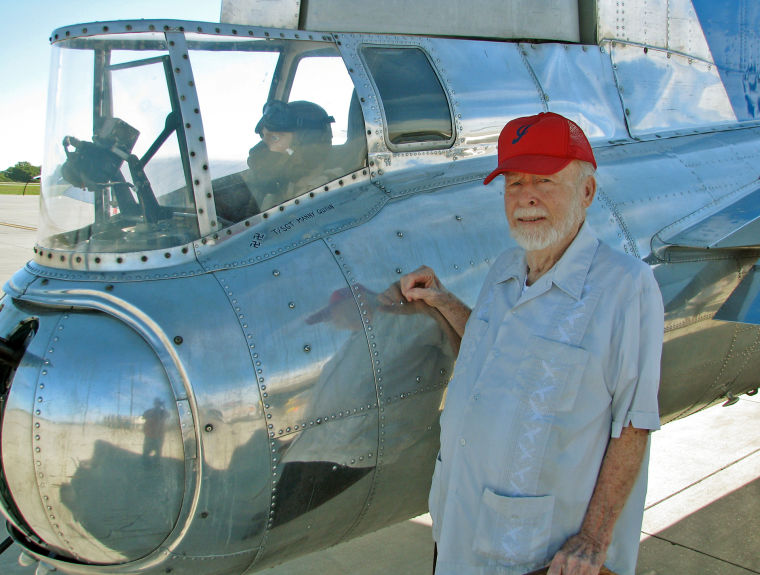 Photo by Eugene Curtin Bellevue resident Gail Farrell, 88, poses at the tail of a B-17 Flying Fortress Friday at the Council Bluffs Airport. Farrell was a tailgunner on B-17s during World War II and was among the crowds that poured in to to see the plane. The B-17 belongs to the private Commemorative Air Force and stopped for a week on a cross-country journey.

It must have brought no comfort at all to the Axis powers when Gail Farrell took his place in the tailgunner’s seat of a B-17 Flying Fortress.

It was the waning months of World War II and the cities of Nazi Germany lay battered by armadas of B-17s, formidable heavy bombers dubbed the Flying Fortress. Germany’s armed forces on land, air and sea were, as athletes say, sucking wind when onto the field of battle stepped a new wave of American 19-year-olds.

Farrell, who had trained as a tailgunner for about 18 months in various parts of the United States, had finally been assigned to the European theater, specifically to the 379th Bomb Group, which was stationed in Kimbolton, England from May 1943 to June 1945.

He will turn 89 in October and lives today on Lincoln Road in Bellevue.

But Bellevue, and Offutt Air Force Base, lay far in Farrell’s future when the Wyoming native strapped himself into the claustrophobic rear cabin assigned to a B-17 tailgunner for the first of his 21 combat missions.

Farrell was among crowds of people who showed up at the Council Bluffs Airport last week to view one of the few operational B-17s still in existence. Owned and flown by the private Commemorative Air Force, “Sentimental Journey,” a Betty Grable-decorated B-17, stopped off for a week on a cross-country journey.

It sat mere feet from a P-51 Mustang fighter sporting the colors of the 55th Wing, which — in various incarnations —has been an integral part of Offutt Air Force Base since 1966. The P-51 fighter played a critical role as a bomber escort during World War II and the Korean War. However, it is perhaps most famously known as the plane flown by the Tuskegee Airmen.

Records show that the particular P-51 on display was assigned to the 55th Fighter Group in March of 1945, too late to see action in World War II but typical of the Fightin’ 55th P-51s that accompanied the B-17s on their bombing missions.

Farrell said that by the time he took to the air the worst was over.

The German Luftwaffe had been largely destroyed in the preceding years and his main concern, in addition to the few remaining German warplanes, was the hail of flak that invariably thudded into the fuselage.

“We had taken over the air war, and we weren’t losing so many 51s anymore,” he said, “but the flak was the worst part. You just had to fly through that stuff. It got so heavy you thought you could get out and walk on it.”

“They took a few planes down,” he said. “It was the luck of the draw.”

Farrell was 18 and fresh out of high school in Manhattan, Kan., in 1943 when he walked into Fort Riley, Kan., and signed up.

In February 1945, he arrived in England, just in time to apply the final blow to the Axis threat.

After the German surrender, he returned to the United States where he was about to be assigned to the Pacific but was saved from that ordeal by President Harry Truman’s decision to drop atomic bombs on Hiroshima and Nagasaki, which brought the conflict with Japan to an end.

“That was the best thing that could ever have been,” he said. “Otherwise there would have been hell to pay. Those people were going to fight to the very end.”

He was recalled to service for the Korean War, although Guam was the closest he got to that battlefield.

In between wars Farrell earned a degree in journalism from Kansas State University, and, in 1960, that credential brought him to Offutt Air Force Base as associate editor of Strategic Air Command’s Combat Crew magazine, where he remained until his retirement in 1983.

Farrell possesses a copy of a photo taken on March 22, 1945. It shows his unit shortly before taking off to bomb the R.R. Marshalling Yards in Gelsenkirchen, Germany. There are eight young men there – for the record, in addition to Farrell, Ted Margeson, Ray Westbrook, Russell Fisher, Bill Borror, John Deignan, John Taylor, and Bill Shlesinger.

Their inevitable unease is well hidden behind a display of jauntiness, none more so than Staff Sgt. Farrell, whose hat lies askew his head.

Only four are still living, though all survived the war.

“We were the lucky crew,” he said. “Not everyone could say that.”

Only last month, the longtime Bellevue resident was awarded France's Legion of Honor for his service during World War II.

Photo by Eugene Curtin Bellevue resident Gail Farrell, 88, poses at the tail of a B-17 Flying Fortress Friday at the Council Bluffs Airport. Farrell was a tailgunner on B-17s during World War II and was among the crowds that poured in to to see the plane. The B-17 belongs to the private Commemorative Air Force and stopped for a week on a cross-country journey.