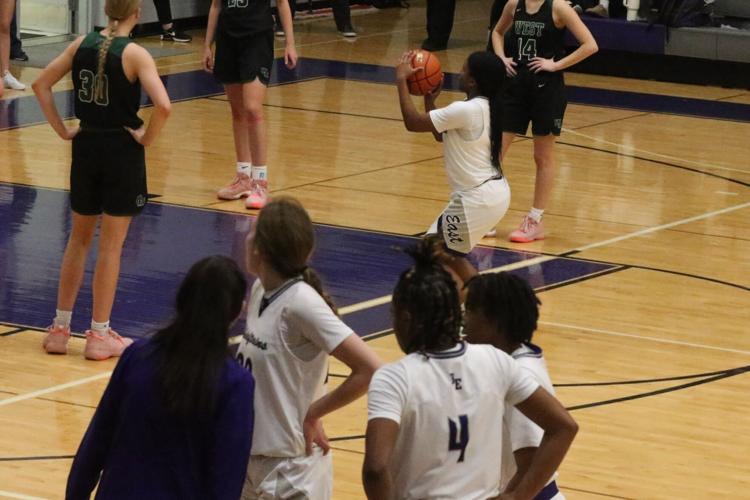 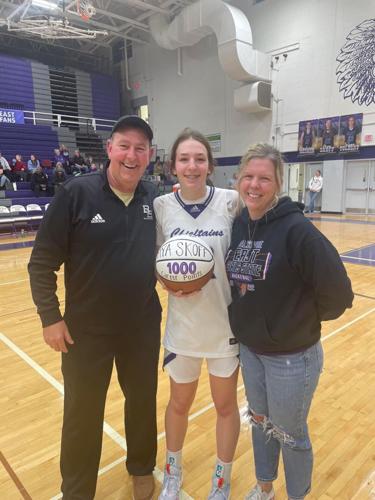 No. 6 Bellevue East took down top-10 opponent Millard West 62-52 at home with a career-high 19 points from junior Kara Stricklin leading the way on Tuesday night.

“Definitely a good win for us. We played them a few weeks ago, so we knew how tough they would be,” said Chieftains head coach Brittany Wilson, referencing a 59-56 win for her team over the Wildcats on Dec. 30. “They’re very talented, got seven, eight kids that can score really well and got a lot of size, so we knew we’d be in for a battle today.”

Millard West got out to an ideal start, swishing a trio of three-pointers after a scoreless first couple of minutes in the game.

Falling quickly behind 9-3, the Chieftains relied on the scoring of Kara Stricklin and Mya Skoff to reduce the deficit to 15-13 at the end of the first quarter.

Stricklin said the key to bouncing back was staying aggressive and having defense lead to offense.

The second quarter started with a frenetic pace, both teams going up and down the court, scoring on nearly every shot they took. Combining for 18 points in the first 2:30, Millard West maintained a four-point lead.

Led by 11 and 7 from Stricklin and Skoff, the Chieftains went into the half down 30-27. The Gessert twins, sophomores Neleigh and Norah, combined for 17 points, but the more glaring discrepancy was the rebounding numbers: 17-8 in favor of the visiting Wildcats.

“We have up seven offensive rebounds early, and so we talked at halftime that we could crash (the boards) better,” Wilson said. “We thought we rebounded a lot better offensively and defensively (in the second hafl).”

The Chieftains made the necessary adjustments — holding Millard West to just 10 third-quarter points and winning the battle of the boards 14-12 — and started the half on an 8-2 run.

“Just being aggressive, staying in their chest,” said Stricklin on their team defense. “We didn’t want to let them get a big one.”

With six lead changes in the second half, the Chieftains went ahead for good on a three by Rylee McLucas, and extended the lead to five on the first of two by Bra’Ni Jackson.

“Rylee was huge, there were times we took her out to just get a quick breather in the second half because she was rebounding and executing what we asked her to do,” Wilson said. “And the biggest thing for her, Bra’Ni and Jayla, they’re all young players, and they understand it doesn’t matter if you can go score 20, if you can go rebound, play hard, do what we’re asking you to do to help the team win.”

With five players averaging 7.7 or more points per game, the unselfishness is what the Chieftains head coach said helps them win. Jayla Wilson and Skoff both average at least 3.2 assists per game.

Millard West never got closer than five, as Stricklin finished with a career-high 19 points and the

“It’s pretty big. I’ve been working really hard and so it’s good to see that the work is paying off,” the junior guard said.

Stricklin added that to carry over the momentum from a top-10 win and a pair of wins by a combined score of 133-46, the Chieftains need to continue doing the “little things,” like rebounding and defending.

Bellevue East’s head coach said continued development and health of players like Mae Mae Gilmore – scored two on Tuesday night – will be what will help them keep the winning ways going.

“We played two games in the last 14 days. But it’s been a great opportunity for us to get back in the gym and practice and improve and develop and we’ve done that individually and I think as a team as well,” Wilson said.

The Chieftain boys had a chance to tie Millard West late, but an off-balance shot by J.J. Ball — leading scorer with 17 points — couldn’t quite bank in off the backboard.

A 24-point first quarter between the two teams was most of the first half offense, as the Wildcats finished just 4-22 from the field and trailed 24-16 at the break.

Millard West began to figure things out in the third, and carried the momentum into the fourth.

Chipping away, the Wildcats were led by Jaidyn Gaius-Anyaegbu (14 points) and Cooper Fortune (12). After giving up the lead, Chieftain Jacobi Adams tied the game at 42 with a big three with 3:20 left.

The teams split a pair of and-one plays, Eli Robinson — who finished with 10 points and seven rebounds — finishing his with a flourish on a dunk, as the game was tied once again.

After the Wildcats pushed back ahead by three, Ball got a deep three to fall — similar to the shot that didn’t fall in overtime — with a couple of defenders in his face to tie the game at 48 and send it to overtime.

In overtime, the Chieftains couldn’t keep the Wildcats from getting to the free throw line — 7-10 in the extra period — but fought valiantly to bring the game down to Ball’s final shot attempt.

The Alley sets out to modernize bowling experience

A planned high-end pizzeria, all-ages game arcade and a high-tech axe throwing system could transform a classic Bellevue bowling alley into an…

The Alley sets out to modernize bowling experience

A high-end pizzeria, an all-ages game arcade and a high-tech ax-throwing system could transform a classic Bellevue bowling alley into an ultra…

The dried bouquet of flowers preserved from Nettie Escamilla-Vela’s funeral service burned in the fire.

FOOTBALL: Nacarelli and Almgren to continue careers together at Hastings College

A pair of Omaha Gross linemen, Carson Almgren and Salvatore Nacarelli, will continue their playing careers together at Hastings College.

Jaden Jackson came to Bellevue West with the reputation as a shooter.

Omaha Public Power District welcomes Core to Board of Directors

The Omaha Public Power District welcomed a new board member from Sarpy County at its monthly meeting Thursday.

Time for a new chapter in story of telling our stories

A newspaper is a personal endeavor.