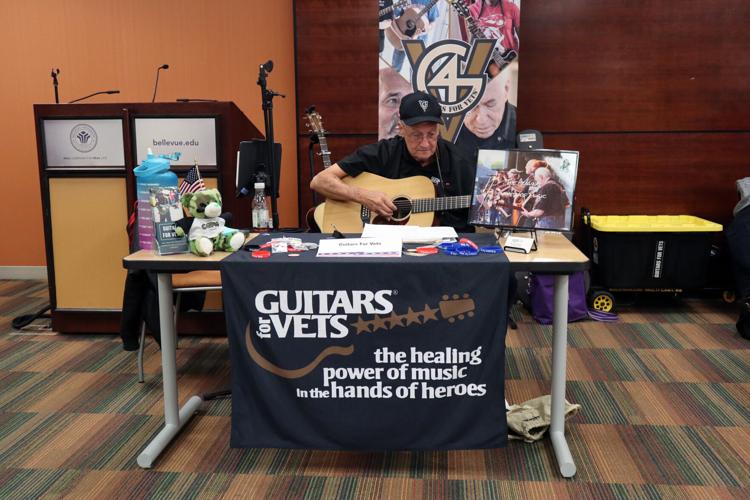 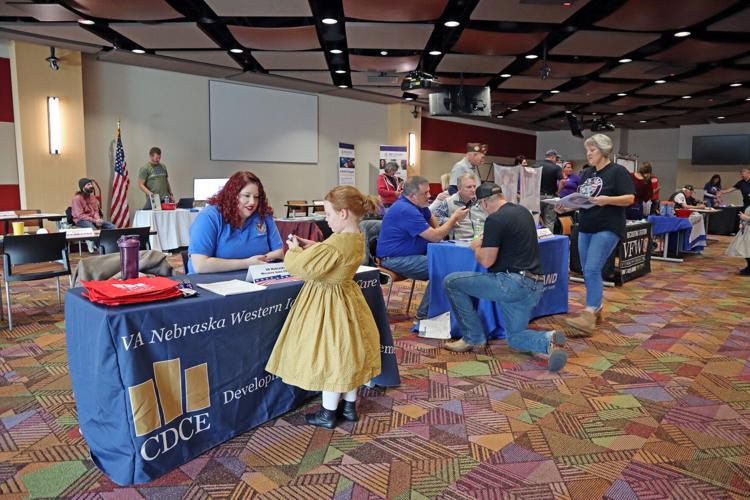 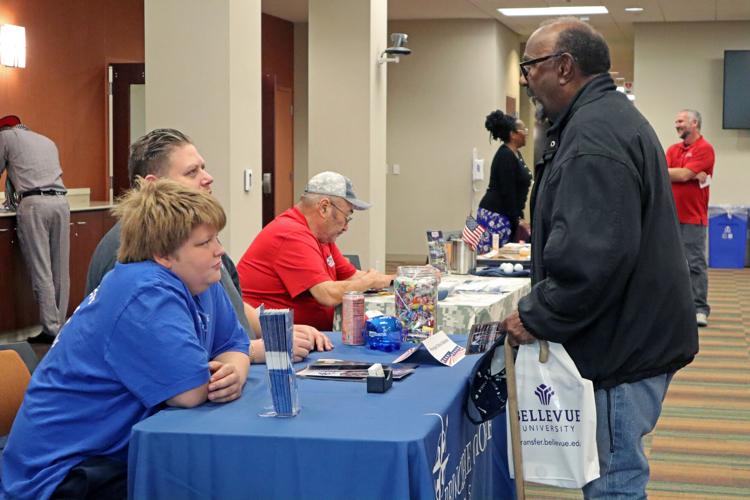 Earl W Armstrong, right, visits with those from Principal Choice Solutions. Pictured is Christian Jennings and his son Drank Jennings, 12. The group works on Veterans Affairs claims and authorization. 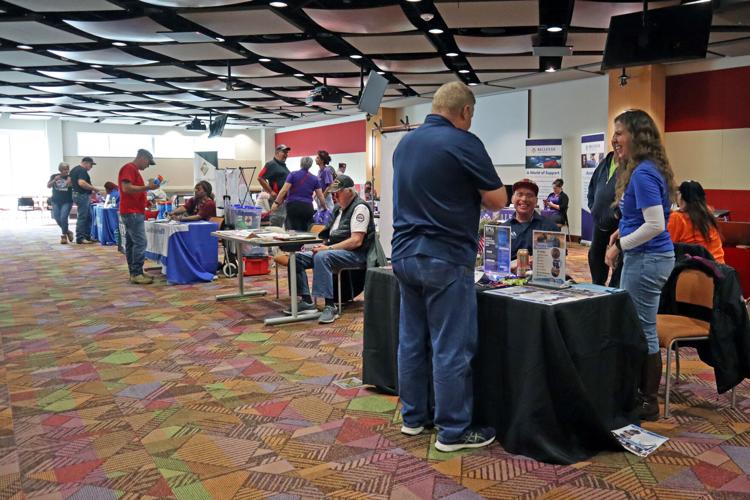 A Saturday event at Bellevue University aimed to connect those who served with the services they need.

After the annual Nebraska Veterans Parade was postponed and then canceled due to cold, rainy weather, the planned Military Expo became the main event. About 100 people gathered in the university’s administration hall to meet with local veteran-focused organizations offering everything from health care assistance to camaraderie.

Matthew Ritter, the relationships manager for military programs at Bellevue University and an Army veteran, organized the expo. He says it’s important to get organizations together under one roof to educate veterans about services that are available to them.

“People don’t know what’s out there,” Ritter said. “The military does a good job of transitioning from service to civilian life — and it is a transition, it can be very tough on people — but once they’re out and done, it’s hard to know what’s available.”

Booths featured information on disability benefits, services for homeless veterans, free gym memberships and mental health support. Most attendees were veterans themselves, but family members and supporters passed through, too.

José Puentes isn’t a veteran, but four of his brothers are — including Sgt. Manuel Puentes, who was declared MIA in the Vietnam War and has never been found. To honor his brother, Puentes travels to veterans events around the state in a decked-out camouflaged car with his brother’s photo and names of other Omaha veterans plastered on the sides.

“When I meet veterans, I see them as my brothers,” Puentes said. “And I see my brother in them.”

Many of the organizations at the expo focus on making sure veterans are connected with essential needs like health care benefits and a furnished home. Mike Jackman, the commander of the Bellevue chapter of the Disabled American Veterans, goes to as many community events as possible to spread the word about benefits that veterans and their families are entitled to.

At Moving Veterans Forward, the organization’s main goal is to help veterans get back on their feet. When previously homeless veterans are placed in a house or apartment, they often have no furniture or housewares to sustain a life there. The group provides them with free furnishings, and volunteers undertake the entire moving process.

In total, they have helped settle more than 3,600 people in the Omaha area.

Ron Hernandez, the organization’s founder, says that needs in veterans’ communities are constantly changing. In response, they have begun to offer peer support counseling, host car shows and other community events and even provide a safe place for veterans with children in foster care to have family visits.

“As I see a new thing that needs to be tackled, we go after it,” Hernandez said.

Other organizations focus on another vital aspect of veterans’ lives: community. One such nonprofit is Dog Tags Garage, which provides a space for veterans to go to get free or low-cost car repairs. It’s also just a space for veterans to be in community with one another and “play with cars,” something that the founders say can help to combat PTSD.

Mark Hammer, one of the founders, said the group is specifically interested in getting more female veterans involved.

“You take a male veteran with PTSD, and he has to struggle to get the basic services — he has to convince someone of what’s going on with him and hope somebody recognizes it,” Hammer said. “You put a female veteran in exactly the same spot, and she is invisible. She is ignored. It’s our goal to bring women veterans forward, bring them out of the shadows, put a wrench in their hand and build a community.”

The Heartland of America Band will perform four free family friendly shows for the holidays.

Mayors share progress over past year in Sarpy County

Sarpy County’s five municipalities are going into 2023 on strong footing, along with two counterparts in Douglas and Cass Counties.

A new development northeast of Bellevue West High School has received more than $2.6 million in federal and state funding and tax credits to s…

After a hiccup on Thanksgiving, the annual holiday display at Washington Park is up and running for the community’s enjoyment.

LINCOLN – Omaha Gross ran into the Bennington buzzsaw on Tuesday, Nov. 22, in the Class B State Championship Game at Memorial Stadium, losing …

Tracey Colgrove spent Thanksgiving welcoming people to his cafe and offering them a free turkey dinner.

BOYS BASKETBALL: Like lightning, Thunderbirds look to strike back this winter

Bellevue West boys basketball is looking to strike back like lightning after back-to-back state title defeats to Millard North.

Earl W Armstrong, right, visits with those from Principal Choice Solutions. Pictured is Christian Jennings and his son Drank Jennings, 12. The group works on Veterans Affairs claims and authorization.