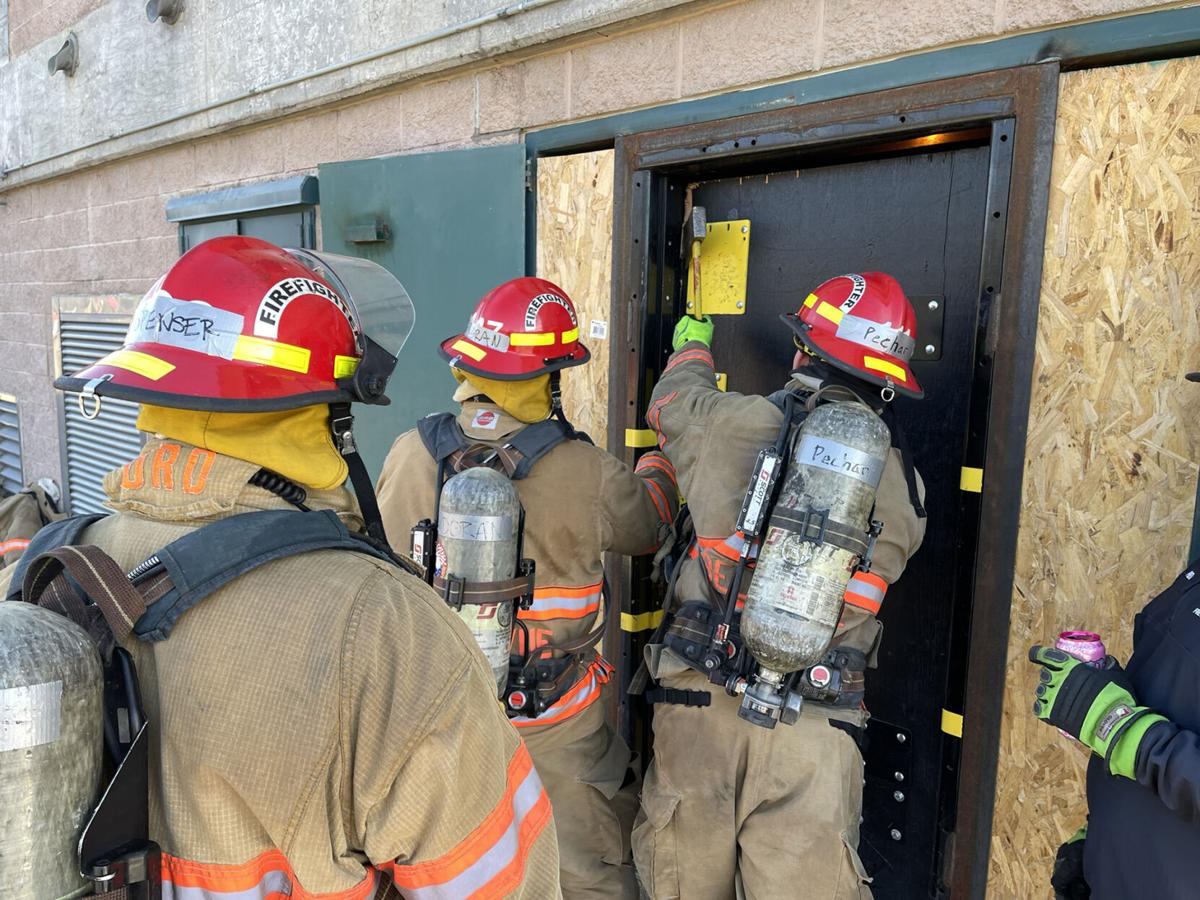 Firefighters prepare for entry during a fire training exercise in recent weeks at the Bellevue Fire Training Center. 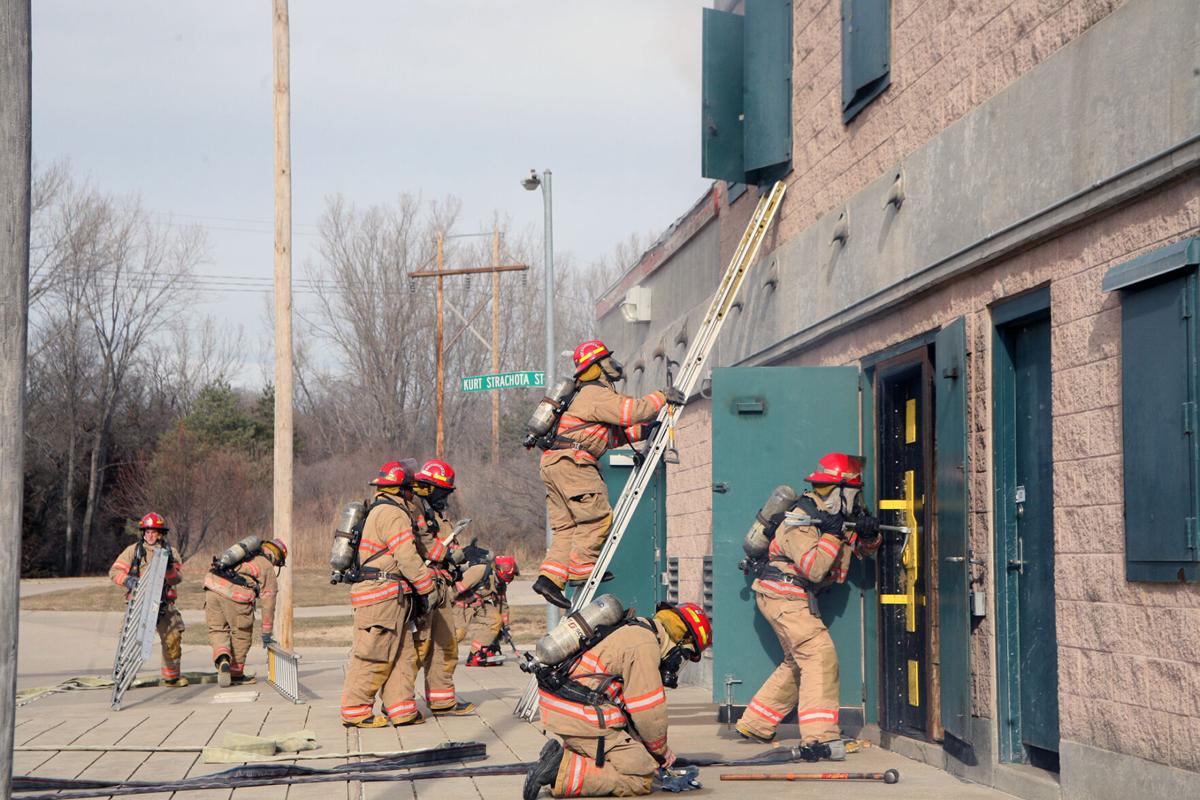 Firefighters prepare for entry during a fire training exercise on Dec. 20 at the Bellevue Fire Training Center. 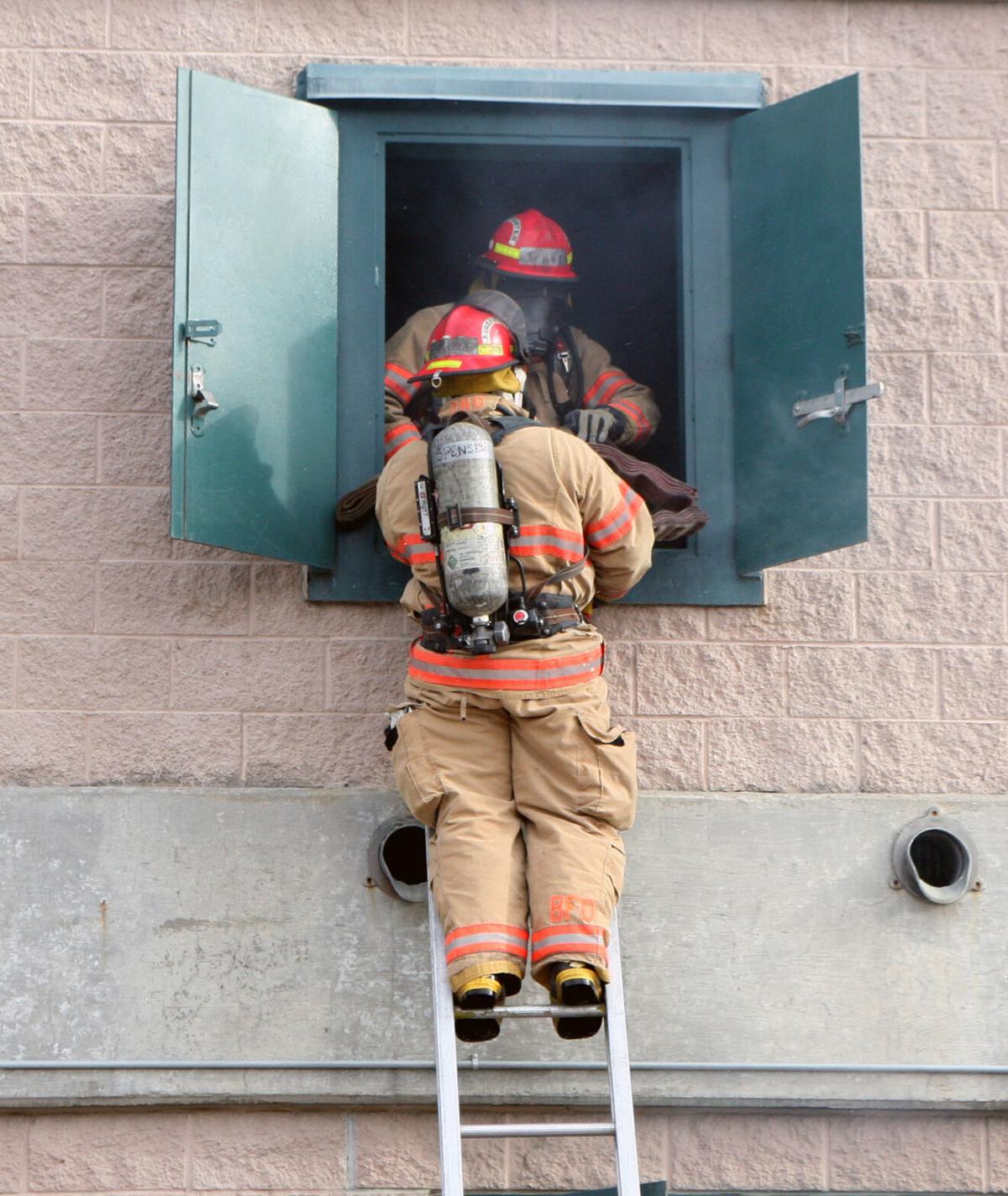 Some of Bellevue’s newest firefighters complete a fire training drill on Monday, Nov. 20 at the Bellevue Fire Training Facility. These firefighters are demonstrating the rescue of a person from the second floor. 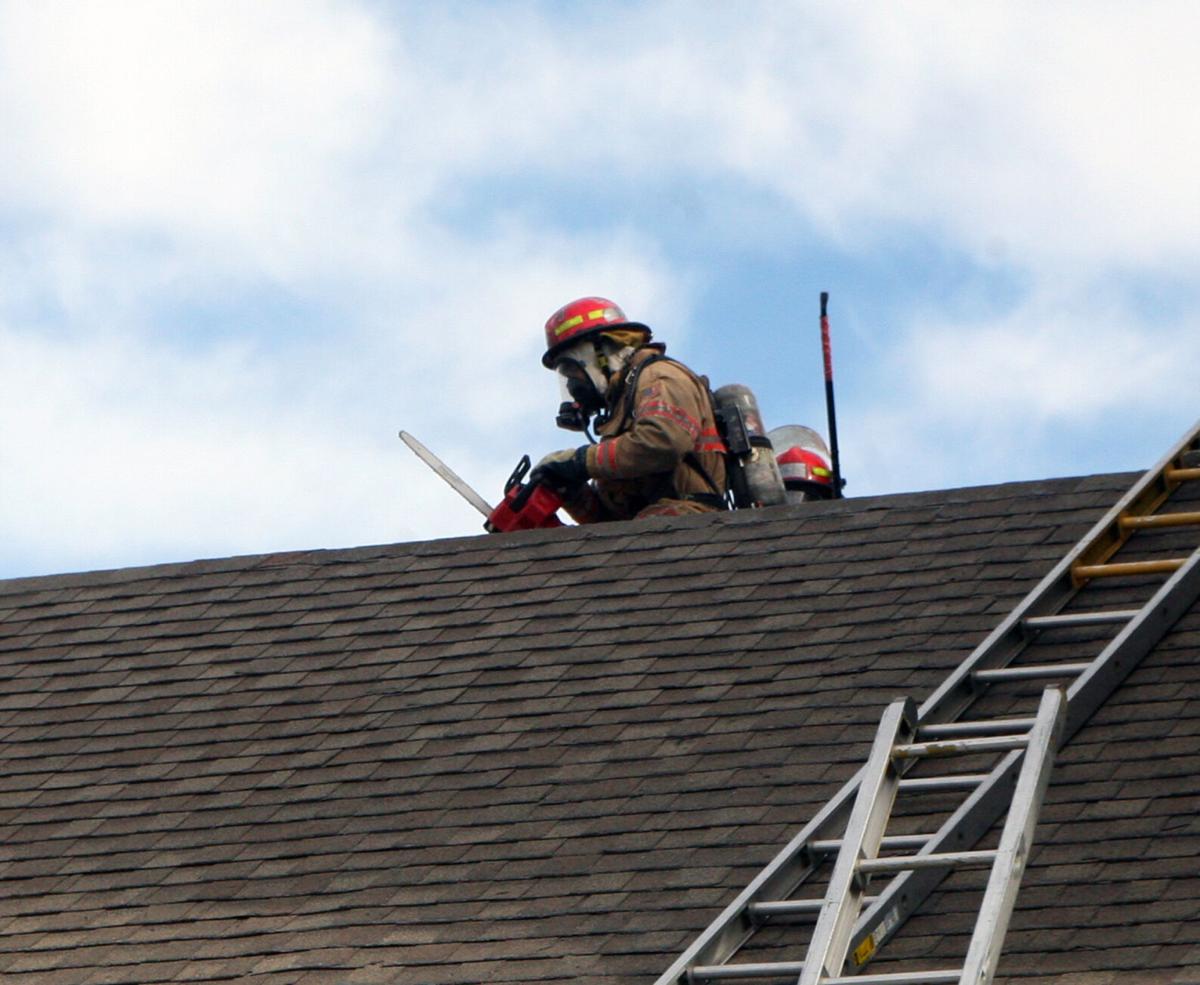 Firefighters prepare to cut a hole in a roof during a training exercise at the Bellevue Fire Training Center. 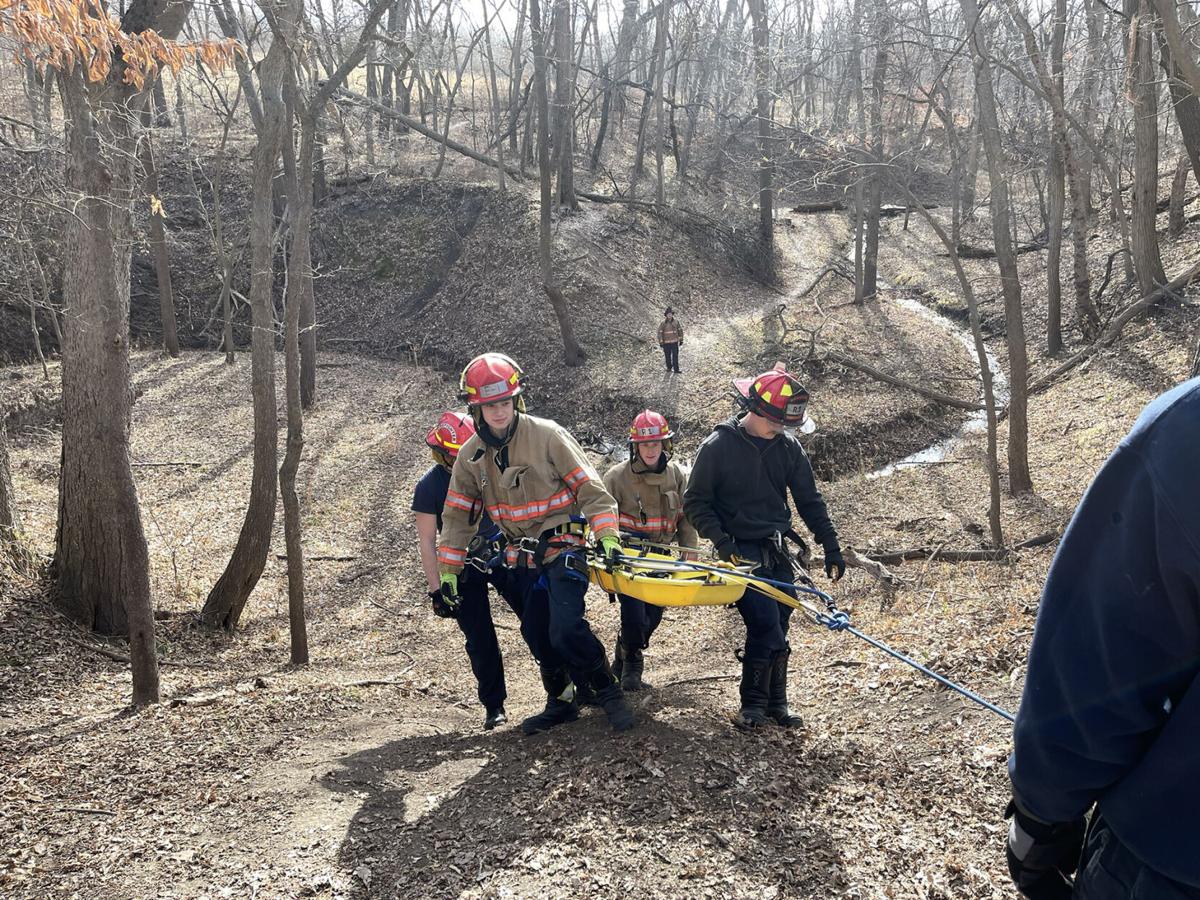 A fire can double in size every 30 seconds. Time is critical.

That’s just one of many lessons learned by nine Bellevue Fire Department trainees in recent weeks. The fall training class wrapped up efforts on Dec. 30 and were on the job by Jan. 1.

While the national standard requires firefighters don their gear in one minute and 30 seconds, this most recent training class was clocking in at 54 seconds, said Battalion Chief Steve Wagner.

Less damage, more lives saved, anything that relies on time as a critical element.

Expanded training is a part of BFD’s move to a wholly full-time staff — year 12 of the five-year plan, Fire Chief Guido said with a laugh and some relief.

Guido said the progress made since Mayor Rusty Hike and City Administrator Jim Ristow has been great, with the department at a point now they thought was years away.

“We haven’t been able to keep building on to the things in the background that are so important to the fire department — the fire training, inspection department, etc.,” he said. “This allows us to put together a better product at the end. This administration and City Council pushed to get this done. They deserve a lot of credit.”

Eighteen additional firefighters were hired in November. After the additional training class is held this spring, the fire department numbers will be at “full strength,” Battalion Chief Wagner said.

Firefighters are now able to train consistently for six weeks, a big step from the seven-day part-time training — working around people’s full-time jobs — that occurred before.

“These guys are training every single day, gearing up, just getting better and better,” Guido said.

Five of the new hires had no previous firefighting experience, a first for the BFD. Staff credit the extended training period for allowing them to do this.

“They get to know each other and have time to build that camaraderie that’s so important on the fire ground,” Guido said. “They’re teaching each other tips and tricks and building unity and teamwork.”

That teamwork allows staff to complete the drill very, very well, Wagner said. “They help each other grow and become cohesive as a team. They work seamlessly together.”

Guido believes the move to full-time staff will also help minimize turnover within the department.

“We were always a young department because senior staff would move on or retire and there wasn’t anybody to move up,” he said. “These guys are going to be ready and able to fill in those shoes because now they’re getting experience in all of the aspects of the fire department, rather than just making calls. They’re seeing how things are run, they’re handling personnel issues. We’ve got guys that are acting as battalion chiefs that were only a captain for less than six months. They’re making decisions.

“We’re able to give them the guidance because we still have the senior staff here but they’re picking up the ball, they’re running with it. I think that’s such a big thing. We’re going to be able to hand off this department to very capable firefighters and help continue a culture they helped build. It’s a huge step.”

The move from a volunteer fire department to a wholly full-time staff has taken about 12 years. Though the process has taken longer than expected, staff think the results will be worth it.

“This administration really pushed to get this done and we’re very appreciative of that,” Guido said. “I think Bellevue’s really going to see the benefit of that.

“The only people who benefit from this are the citizens; it’s for the public.”

The Omaha Bryan wrestling team continued to show why it is one of the best dual teams in the state on Jan. 19 against Bellevue East.

U.S. Sen. Deb Fischer (R-Neb.), a senior member of the Senate Armed Services Committee, released the names of the 27 Nebraskans she is nominat…

The Bellevue girls wrestling team saw plenty of action with back-to-back duals on Jan. 18 and Jan. 19 against Plattsmouth and Omaha Bryan.

Firefighters prepare for entry during a fire training exercise in recent weeks at the Bellevue Fire Training Center.

Firefighters prepare for entry during a fire training exercise on Dec. 20 at the Bellevue Fire Training Center.

Some of Bellevue’s newest firefighters complete a fire training drill on Monday, Nov. 20 at the Bellevue Fire Training Facility. These firefighters are demonstrating the rescue of a person from the second floor.

Firefighters prepare to cut a hole in a roof during a training exercise at the Bellevue Fire Training Center.