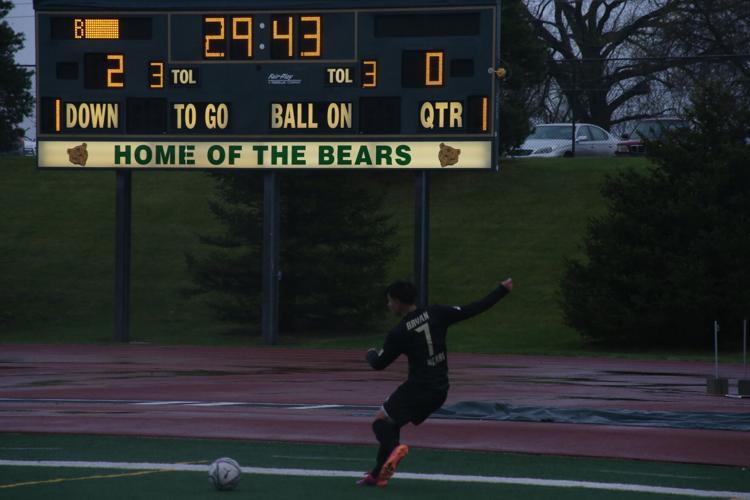 Omaha Bryan junior Paco Barajas crosses the ball into the penalty area late in the first half of the Bears’ 3-0 home win over Omaha Central on Monday, May 2. 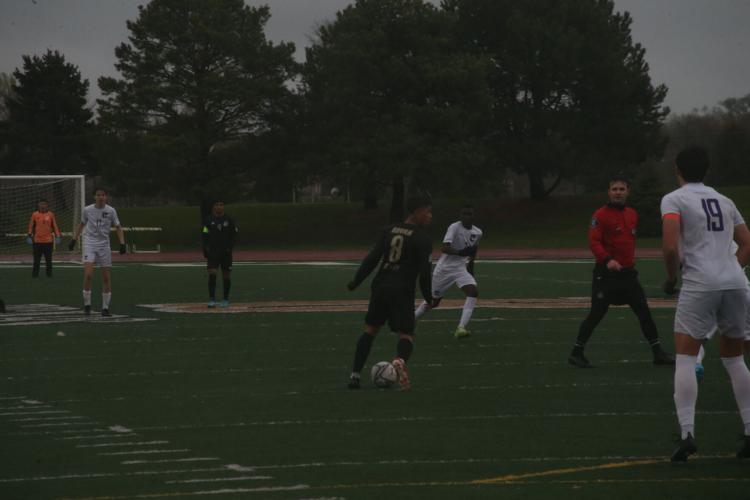 Omaha Bryan senior Cesar Hernandez (No. 8) controls the ball late during the second half of the Bears 3-0 win on Monday, May 2.

In their first-ever home district semifinal on Monday, May 2, Omaha Bryan won 3-0 over Central in a great experience for coach and player alike.

“I feel great, I feel happy that I’m doing this with this special team,” said senior Cesar Hernandez, who scored the Bears’ first goal from a corner kick. “I love scoring from corners, that was the best goal I’ve scored this season.”

“It’s a great experience (hosting a district semifinal),” Bears head coach Daniel Vasquez Gutierrez said. “We’ve had good wins, but we also had some losses that were questionable. We kind of looked in the mirror and said, if we want to host, which was one of our goals, we would have to come together and beat those teams that we need to beat and get those big wins.”

With wins over teams like Gretna, Papio South, Creighton Prep, Westside, and others, the Bears have undergone a major change after some lean years following their lone state appearance in 2014.

“We’ve worked our butts off in the offseason, mainly,” Vasquez said. “When things got hard, I told the guys that we needed to make sure that we got something for the work that we put in... Our DNA is working hard off the ball and that’s how we got those wins against Prep, Papio South, it’s just grinding and working. And I told the guys that once we get on the field and we start doing that, then we start going places.”

In Monday’s game, the Bears got a second goal from senior Emerson Bonilla-Tornez to go up 2-0, but the old adage of that being the most dangerous score in soccer was in the back of Vasquez’s mind.

“We missed a couple chances in the first half that I felt to kind of put the game away,” he said. “And obviously that’s still in the back of your head. The guys need to keep composure and I felt they did that throughout the second half.”

“It was just possessing, because that’s all we needed,” Hernandez added. “We don’t need that much going forward.”

The Bears got a third goal with a lofted shot by junior Francisco ‘Paco’ Barajas-Castro just before the hour-mark. The defense held over the last 20 minutes, and Bryan advanced within one win of their second-ever appearance at state.

“Last year, we couldn’t make it to state, but we’re making a comeback this season and I hope we go into state... make an impact in state and show every team we got it,” Hernandez said.

“We’re very confident but at the end of the day, it’s a district title, the boys know what’s at stake,” Vasquez added. “They know that in order to (make state), we’re gonna have to work hard and we’re gonna get Lincoln Southeast or Lincoln North Star team that’s gonna come down here and obviously they’re gonna be ready, so we have to make sure we’re ready.

“And it all goes back to our DNA, which is working hard and just grinding on the field and making sure we’re putting our work in on the field.”

The Bears improve to 12-5 with the District A-7 semifinal win and will host Lincoln Southeast or Northstar, likely on Thursday.

OMAHA -- A red card in the 13th minute left Omaha Bryan with an uphill battle in the state semifinals, which ended in a 2-1 loss to Omaha West…

A number of Bellevue area teachers were recently recognized as Education Heroes:

BELLEVUE – The Bellevue City Council met and took action on the following at its May 3 meeting:

Omaha Bryan junior Paco Barajas crosses the ball into the penalty area late in the first half of the Bears’ 3-0 home win over Omaha Central on Monday, May 2.

Omaha Bryan senior Cesar Hernandez (No. 8) controls the ball late during the second half of the Bears 3-0 win on Monday, May 2.