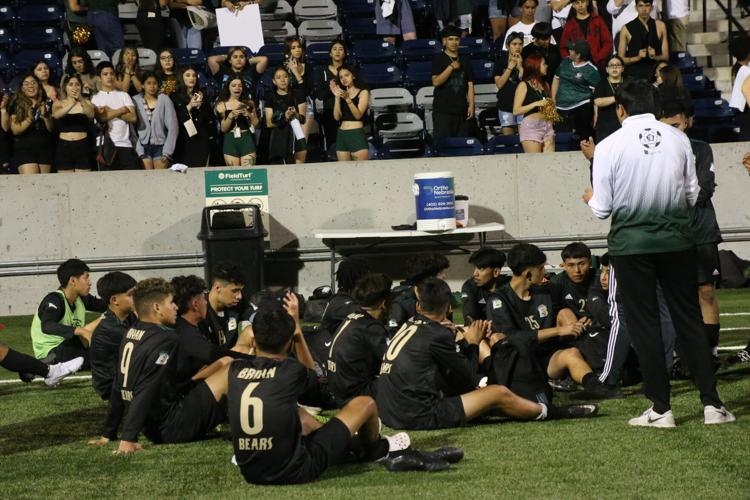 Omaha Bryan players sit in reflection after their 2-1 loss to Omaha Westside in the NSAA Boys Class A state semifinals on Friday at Morrison Stadium. 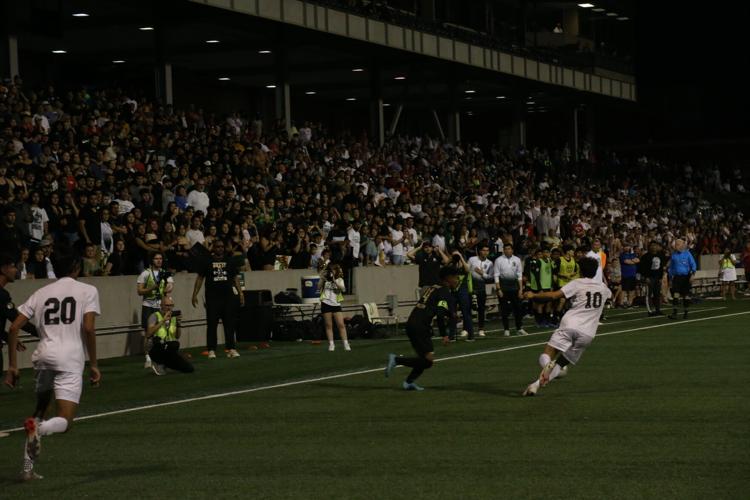 The stands were full at Morrison Stadium to see Omaha Westside's 2-1 win over Omaha Bryan in the state semifinals on Friday.

OMAHA -- A red card in the 13th minute left Omaha Bryan with an uphill battle in the state semifinals, which ended in a 2-1 loss to Omaha Westside on Friday, May 13 at a sold-out Morrison Stadium.

An attempted tackle by Bryan sophomore Luis Gallardo-Mejia went into the chest of a Westside player, and Gallaro-Mejia was shown a red card with 57 minutes left to play.

The Bears were able to create a few chances in the first half, but couldn't convert, while the Warriors scored from a two-on-one when senior Isiah Valenzuela assisted sophomore Jeremiah Hteh in the 42nd minute.

For much of the second half, the Bears sent attack after attack against the Warriors defense, and were awarded a penalty with eight minutes left. Junior Cesar Hernandez Garcia stepped up and put the shot into the bottom left corner to make it 2-1 Westside.

Bryan dialed up the pressure to an even higher level, but were ultimately unable to score an equalizer.

Westside head coach Michael Dean was impressed by the improvement from the Bears after two previous meetings, a 4-2 win for Westside and and 1-0 win for Bryan in overtime.

"They were a much better attacking team than they were the first two times we played," Dean said. "They seem like they know each other better... I felt like they found their roles, the coaching staff was making good adjustments for them, and that's why I think you saw the improvement from them overall. (They showed) great heart, some people might say they were the destiny or Cinderella team. The character they brought on Tuesday night I thought was fantastic... Even when we were up a man with 2-0 lead, I was still not comfortable because of Bryan on the other side."

The Bears run ends in the state semifinals with a final record of 14-6.

Sarpy County recently hired Don Simon to serve as the Director of the county’s Planning & Building Department, a role key to growth and de…

OMAHA -- Gross Catholic saw its season come to a close as they gave up 11 walks in a 10-5 loss to Skutt Catholic at Tal Anderson Field on Monday.

PAPILLION — A ten-run fourth inning sunk Gross Catholic in an 11-0 loss to Elkhorn North in the state quarterfinals on Saturday, May 14 at Wer…

Omaha Bryan players sit in reflection after their 2-1 loss to Omaha Westside in the NSAA Boys Class A state semifinals on Friday at Morrison Stadium.

The stands were full at Morrison Stadium to see Omaha Westside's 2-1 win over Omaha Bryan in the state semifinals on Friday.