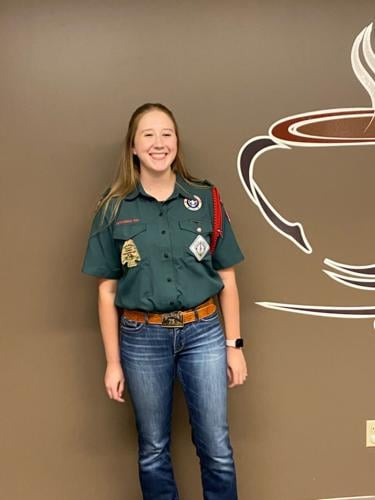 Jacalyn Edens poses for a photo as she earns her Summit Award through the Venturing organization. 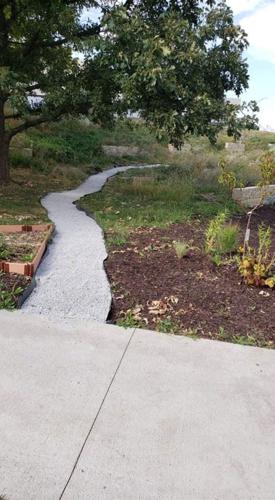 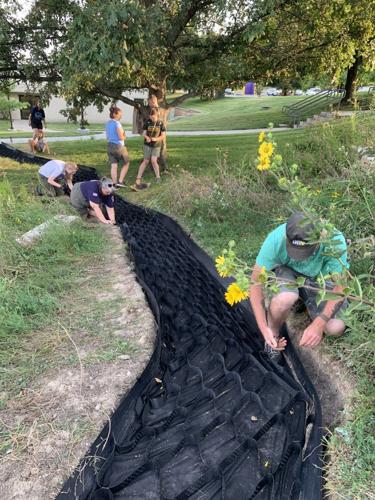 Jacalyn Edens enlisted the help from those in the community to help with her Summit Award project.

This is the path before Jacalyn Edens began her project at the Bellevue University campus.

More students can now access the outdoor research area on Bellevue University's campus, thanks to the efforts of Jacalyn Edens.

Edens, as part of her journey to earning the Summit Award for Venturing, created a barrier-free path to help increase accessibility to the outdoor research area at BU.

It was not an easy project to complete.

Through weeks of hard work and despite the rain, delayed shipments of supplies, 13 other scouts and adults spread over several days working, and about 100 hours of work, the trail was completed in two days before BU's 2021 fall semester.

The 63-foot-long, 3 feet wide, and 6 inches deep trail was ready to be used by students, staff and the community including the nearby VA homes who visit the campus in the mornings to watch the sunrise.

Edens has been involved with Venturing since she was 14-years-old and lived in Colorado.

She was surprised to learn when she moved to Nebraska that the Venturing organization was not nearly as established as it was back in Colorado.

Venturing is a program through the Boy Scouts of America for males and females ages 14-20 (or 13 and completed the eighth grade). The organization has been around since 1989.

"From what I can understand, Venturing used to be a lot more popular before I was in it but it slowly died off over the years," Edens said in an interview.

The community would always ask if Venturing is a part of Boy or Girl Scouts?

"We would always have to explain it is a branch off of the BSA organization, but it is called Venturing, it's coed for boys and girls and our main focus is actually outdoor skills and leadership," Edens said.

Edens said the Summit Award is the highest rank one can earn in Venturing and is equivalent to an Eagle Scout.

Edens wanted to do her Summit Award project around something she was passionate about and after consulting with BU, landed on creating a handicap accessible trail out by the new greenhouse the university had just built.

Edens said she was told by BU that they had been wanting to get such a project done but had struggled to find a reasonably priced contractor to do it.

In regards to the trail, everything had to be dug by hand. Edens also had to compost the grass, plants and keep the dirt so it could be used elsewhere.

The most challenging part of the project for Edens was to find people to help her.

"I had started the project right before school had started and a lot of the other scouts who helped me were younger teenagers," Edens said.

Due to the time dedicated to school, a lot of the younger scouts were unable to assist Edens.

"It came down to me and two other adults that actually had to go out there and finish laying the gravel down and taking everything out and moving the gravel from one side of the greenhouse all the way over to the other side," Edens said.

Despite the hard work, a sense of pride developed in Edens after she completed the project.

"I felt accomplished and extremely happy with myself that I was able to have that done by the fall so that people could use it," Edens said.

She said that BU had a student interested in the greenhouse and outdoor research areas but the university had no way for them to access the locations.

"As soon as they figured out I was doing that project and that I was gonna have it done by the fall semester, it opened up so many more opportunities for people," Edens said.

Edens has a new project now that the trail is completed -- increase the awareness and participation in Venturing in Nebraska.

When Edens approached the Mid America Council for Boy Scouts, she found they did not have a Venturing-focused crew.

"I came from Colorado where Venturing was a little bigger. When I got out here and told them that I wanted to finish my Summit Award they went up the chain of command through the Boy Scouts out here and they could not find anyone who had ever dealt with this before," Edens said.

She said this presented another obstacle to her in addition to a time crunch.

"I knew what needed to be done but the people who were supposed to be getting it done didn't know how to do it so it was kind of a hindrance to me," Edens said.

Edens had to go through an interview process with a board after finishing her project.

"They didn't know how to set up a board because they'd never had mentoring. So it was like a culture shock to them a little bit and kind of an eye-opener that, 'Hey, like we have this wonderful opportunity that we could offer to the youth in this area but we're not utilizing it," Edens said.

Edens said she hopes that Venturing takes off in the area and more youth are able to get involved.

"There is way more to scouting than just Boy Scouts and Girl Scouts," Edens said.

OMAHA -- A red card in the 13th minute left Omaha Bryan with an uphill battle in the state semifinals, which ended in a 2-1 loss to Omaha West…

A number of Bellevue area teachers were recently recognized as Education Heroes:

BELLEVUE – The Bellevue City Council met and took action on the following at its May 3 meeting:

Jacalyn Edens poses for a photo as she earns her Summit Award through the Venturing organization.

Jacalyn Edens enlisted the help from those in the community to help with her Summit Award project.

This is the path before Jacalyn Edens began her project at the Bellevue University campus.