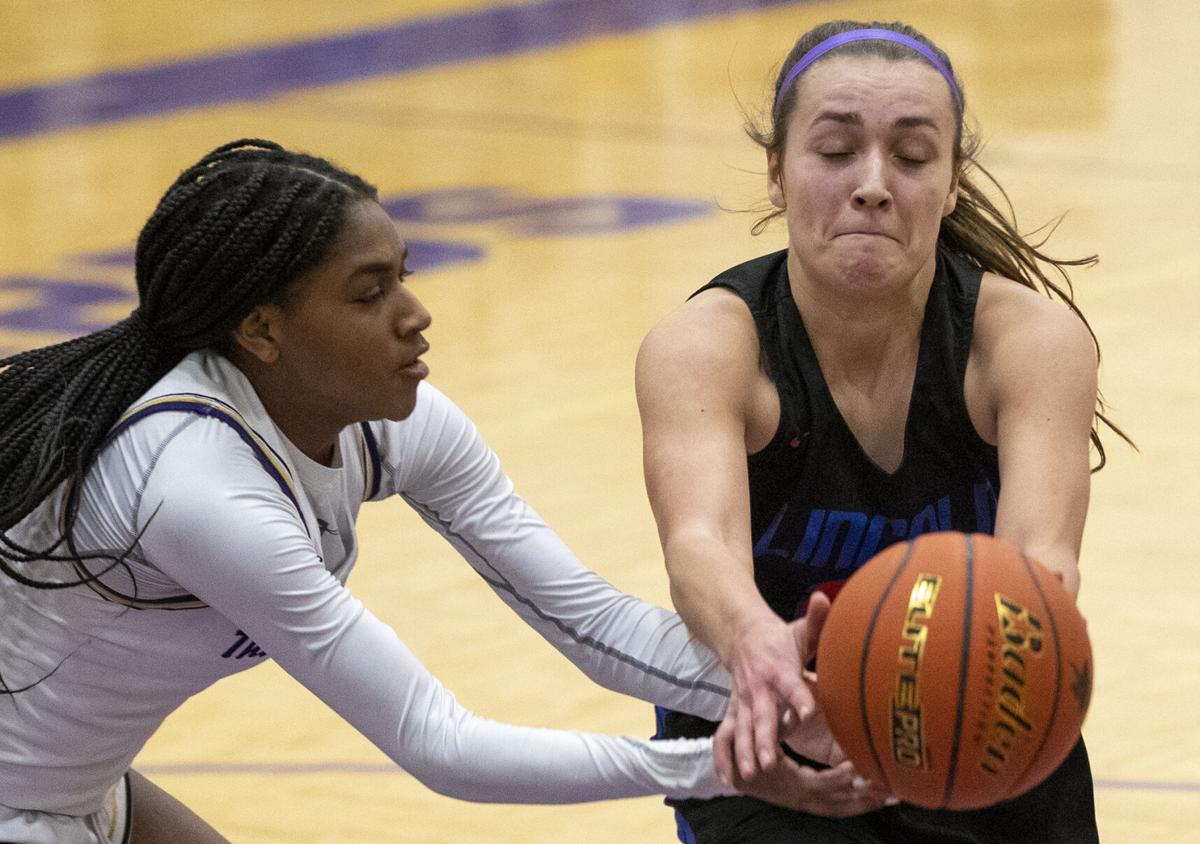 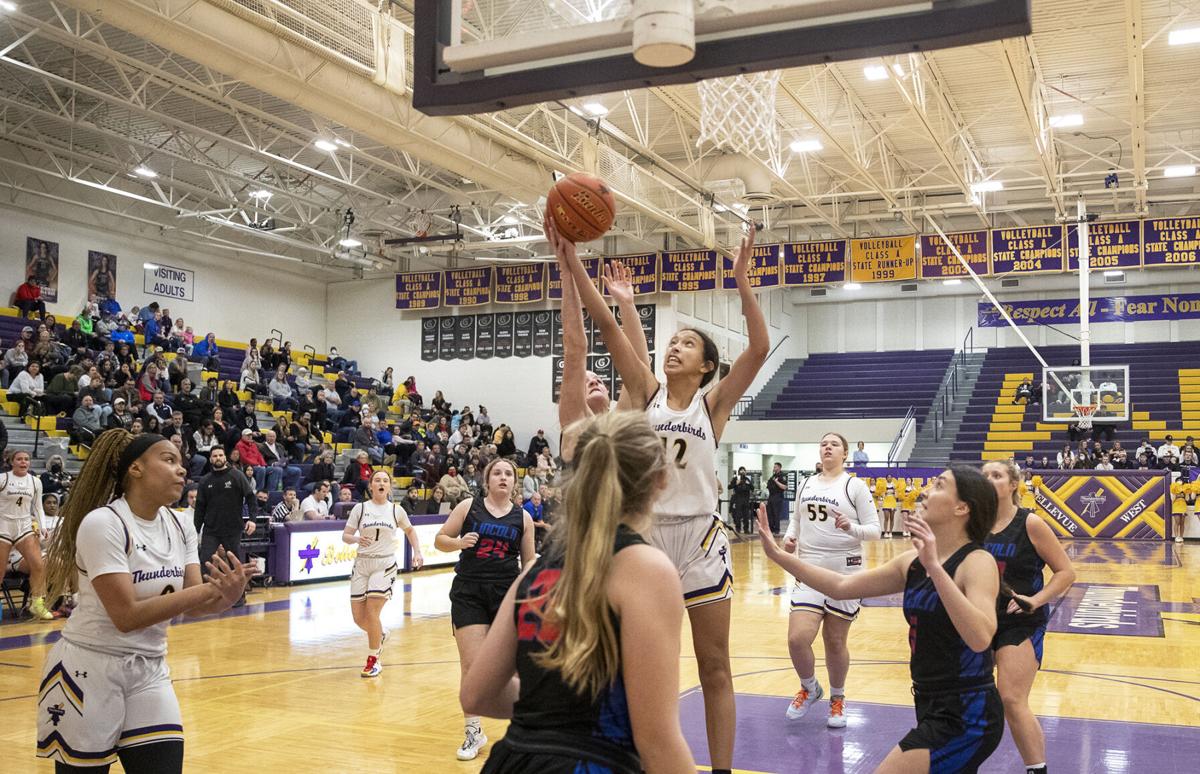 Bellevue West’s Zhyael Dotzler (12) and Abraham Lincoln’s Molly Romano (10) fight for a rebound during the fourth quarter on Tuesday, Jan. 4, 2022. 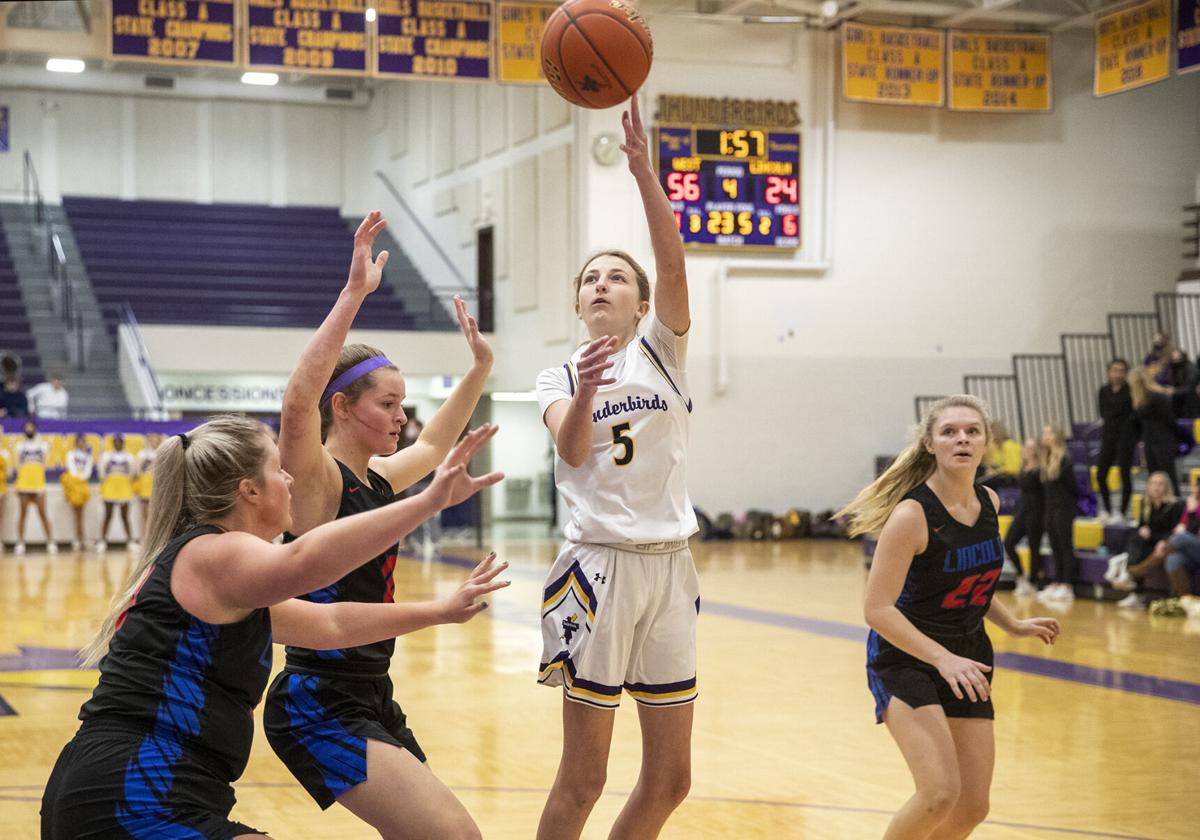 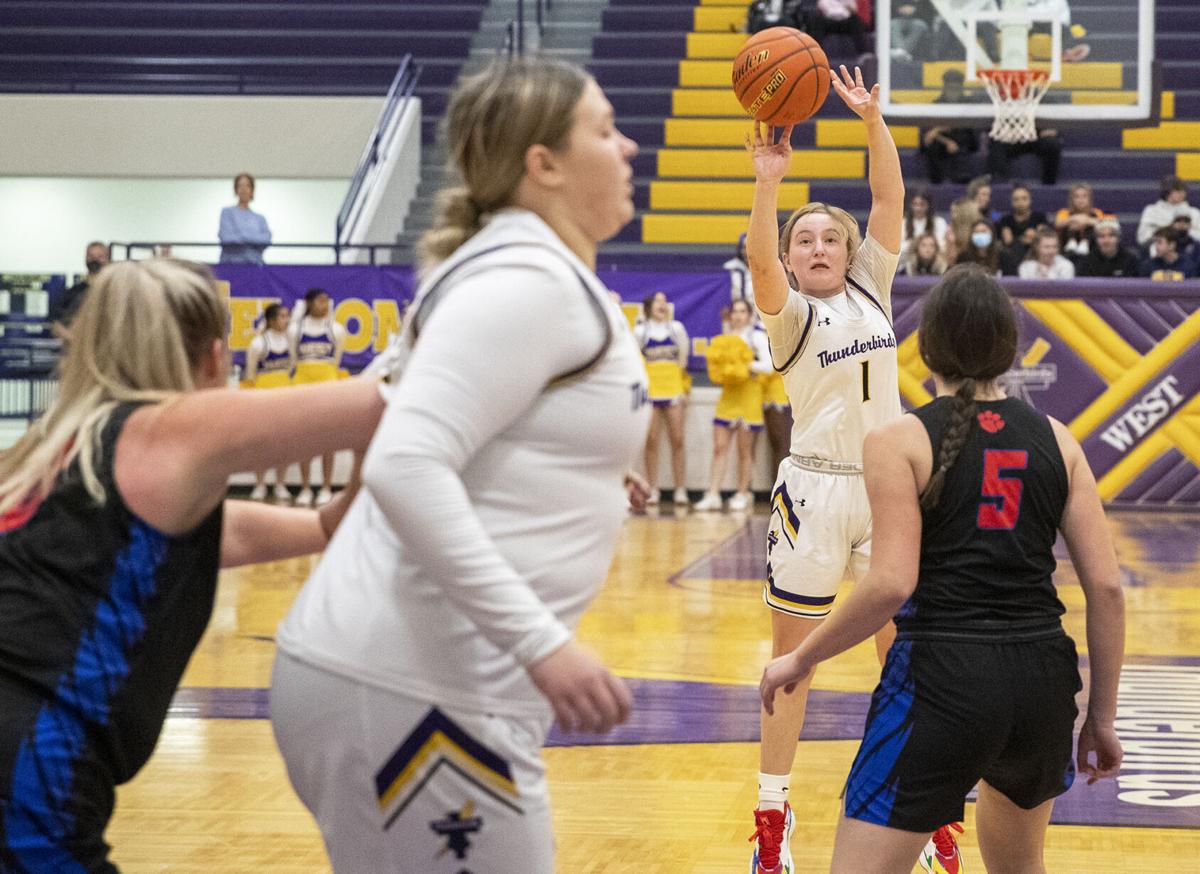 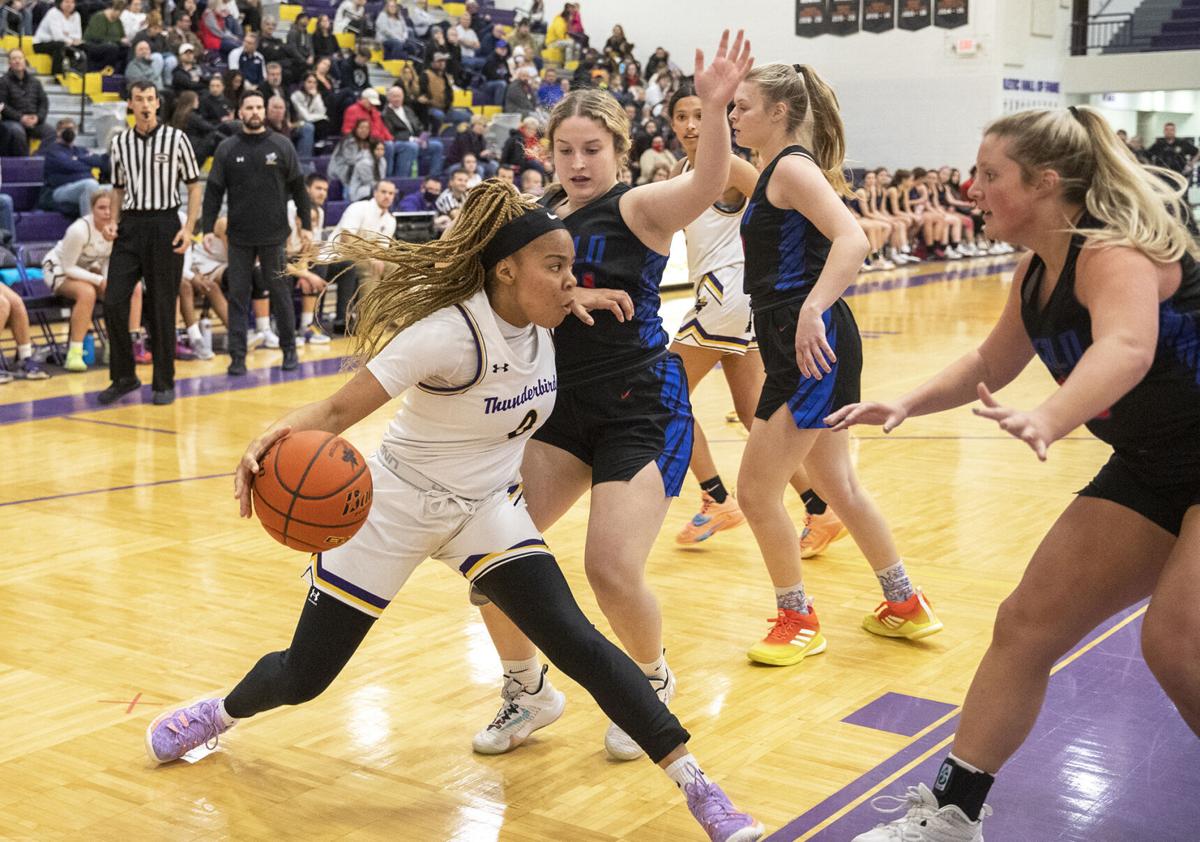 BELLEVUE — Bellevue West girls basketball closed the first and second quarters on runs of 8-0 and 7-0 to take an 11-point lead into halftime and never looked back in a 62-26 win on Tuesday at home against Abraham Lincoln.

The Thunderbirds also went on a big run in the third quarter, where they outscored the Lynx 24-8 to seal the victory.

“I thought we had a slow start, but we did some good things with our pressure in the second quarter and were able to speed them up,” Bellevue head coach Dane Bacon said. “That was kind of what we stayed the rest of the game and it helped us out.”

Abraham Lincoln held a 5-2 lead midway through the first quarter, but Bellevue West went on an 8-0 run with buckets from Dani Peterson, Danielle Coyer and Taryn Wharton over the final three minutes to take a 10-5 lead.

Abraham Lincoln junior Jenna Carle hit a jumper to cut the lead deficit to four early in the second quarter, but the Lynx didn’t score the rest of the half as the Thunderbirds closed the second quarter on a 7-0 run to take an 18-7 lead. Wharton, Peterson, Kenzie Melcher and Grace Schaefer all scored for Bellevue West during the run.

Bellevue West started where it left off in the second half, going on a 10-2 in the first three minutes after Melcher and Wharton hit 3s on the run.

The Thunderbirds caught fire in the fourth quarter and outscored the Lynx 21-11.

“I thought our first half was really well,” Abraham Lincoln head coach Chad Schaa said. “I thought our defense did some nice thing, holding them to 17 points. Unfortunately, we only put up seven.

“And then, they caught fire. They caught fire and we just couldn’t recover from that. We were hoping when it wouldn’t happen but it did. I’ll give them credit. They knocked down some shots that we didn’t think they were going to do and they did.”

“It feels really good to bounce back (from a loss last game),” Melcher said. “We just had a lot of good pressure of defense. We moved the ball around on offense and got them side to side.”

Bellevue West is back in action at 5:30 p.m. on Friday at Gretna.

The Omaha Bryan wrestling team continued to show why it is one of the best dual teams in the state on Jan. 19 against Bellevue East.

U.S. Sen. Deb Fischer (R-Neb.), a senior member of the Senate Armed Services Committee, released the names of the 27 Nebraskans she is nominat…

The Bellevue girls wrestling team saw plenty of action with back-to-back duals on Jan. 18 and Jan. 19 against Plattsmouth and Omaha Bryan.

Bellevue West’s Zhyael Dotzler (12) and Abraham Lincoln’s Molly Romano (10) fight for a rebound during the fourth quarter on Tuesday, Jan. 4, 2022.