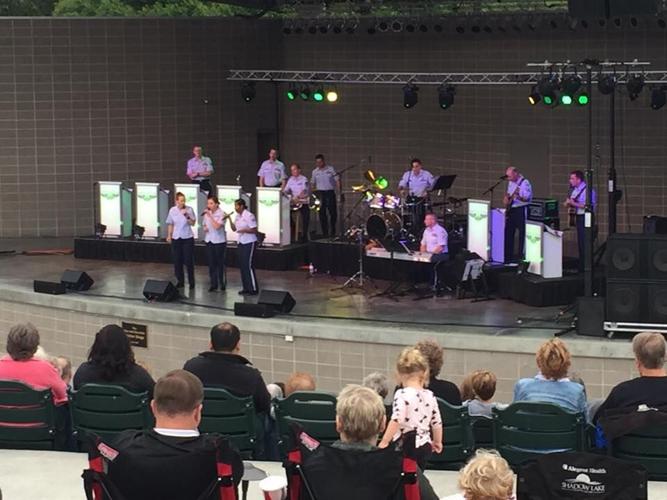 The Heartland of America band performs at SumTur Amphitheater in Papillion. It plans a show there Tuesday. 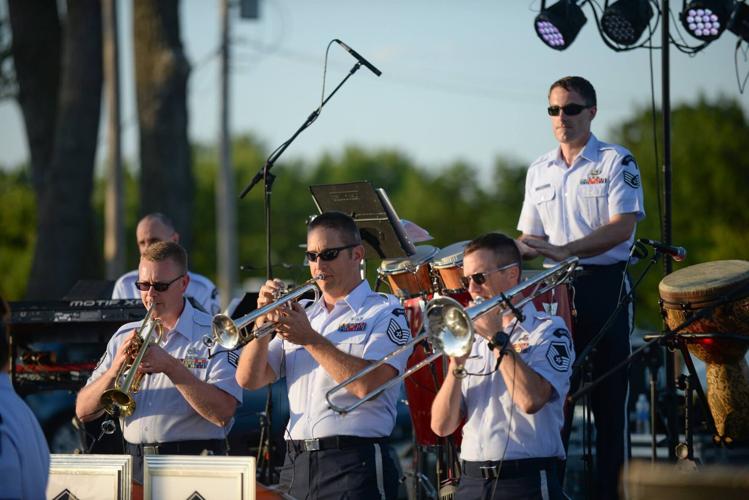 The Heartland of America band will perform its “Sounds of Freedom” concert series starting today in Glenwood, with shows later this week in Papillion, Council Bluffs and Omaha.

As Independence Day approaches, the Heartland of America Band will perform several shows across the metro area to celebrate the history behind the 75th anniversary of the U.S. Air Force.

“They’re going to parallel the growth of the Air Force with the spirit of America and our history in those last 75 years,” said Master Sgt. Ryan Heseltine, the noncommissioned officer in charge of the band.

Free, family-friendly “Sounds of Freedom” concerts will be held:

All shows start at 7 p.m. and should last a little over an hour.

“We will start with the music that goes back to the early days of the Air Force with music by Glenn Miller, who was an Air Force officer who kind of reinvented military music in his time,” Heseltine said. “We’ll be delving into areas like jazz, and then we’ll be moving through the eras into the ‘50s and the ‘60s, as we head towards Korea and Vietnam, and then music of the ‘60s and ‘70s. We’re also touching a little bit on some different styles of music that are unique, with country music and some of our biggest inspirations that we’ve reinvented as well. There’s actually a little bit of a tribute to the Beatles.”

The show even includes a bit of disco as it marches into contemporary popular music, as well as some traditional patriotic selections, during which veterans and service members will be honored. A narrator will walk the audience through the history accompanying the selections.

“It feels very fluid in a sense, like a story being told,” Heseltine said. “We’re just giving as much music as we can as well as painting pictures for folks, too.”

Heseltine serves as a sort of executive producer for the program, and the musicians all have roles to play in the logistics and assembling of the show. He said they are aiming to please everyone who comes out to the shows, no matter their age or background.

“Our program will have something for everybody and that folks will be proud of America and their Air Force at the end of the program,” Heseltine said. “We certainly look forward to seeing them and even getting a chance to meet them afterwards.”

D. Paul Hartnett, a former member of the Nebraska Legislature and Bellevue school board, passed away on Sunday, June 27, at age 94.

The former Fontenelle Hills Golf Course is for sale.

Voting Tuesday in Nebraska’s 1st District special election? What you need to know

City of Bellevue approves sale of library building to ENCAP

The Bellevue Food Pantry will be moving to a bigger building.

Advocates for legalizing medical marijuana switched Wednesday, June 22, from urging Nebraskans to sign their petition to begging them as a Jul…

A plan to raze a trio of vacant 120-year-old buildings in Olde Towne drew no opposition at a Bellevue City Council hearing, but the prospect o…

Officials are reminding residents that the Bellevue Loop Trail remains closed due to levee improvements on and around the trail. The City of B…

In the first leg of a home and away doubleheader against Millard Sox Gold and Jordan's Studio, Hike Real Estate shortstop Landen Johnson deliv…

The Heartland of America band performs at SumTur Amphitheater in Papillion. It plans a show there Tuesday.

The Heartland of America band will perform its “Sounds of Freedom” concert series starting today in Glenwood, with shows later this week in Papillion, Council Bluffs and Omaha.