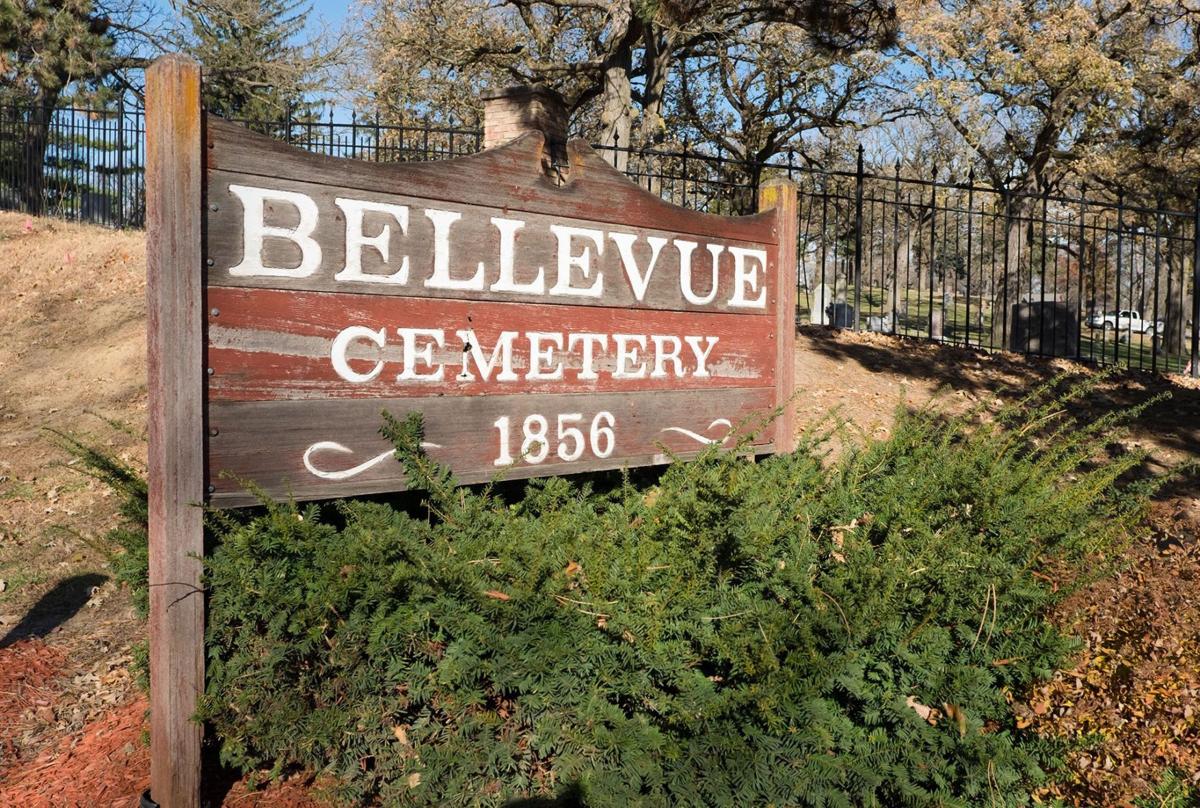 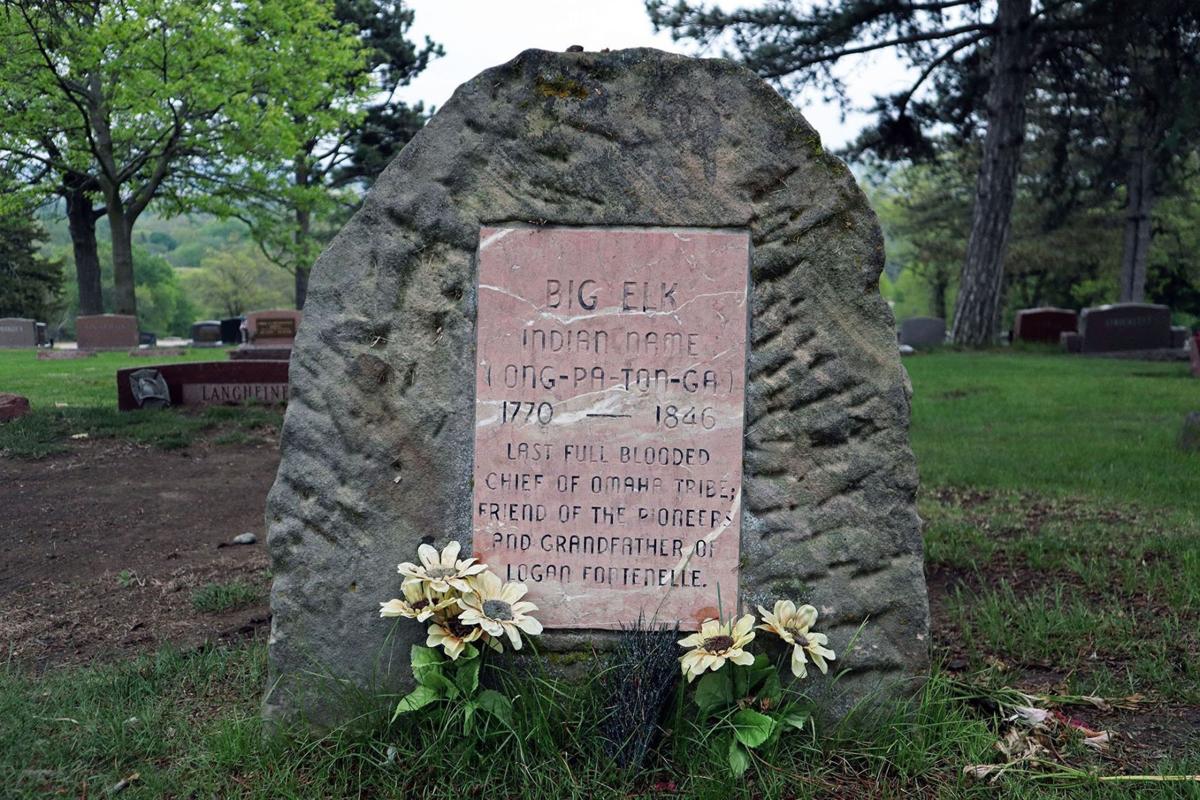 Chief Big Elk’s grave inside Bellevue Cemetery. His remains were reburied here after previously being laid to rest in two other spots in the city. Elk was chief of the Omaha tribe and aligned with the United States in the War of 1812. A bench and tombstone honor Elk at his resting place. 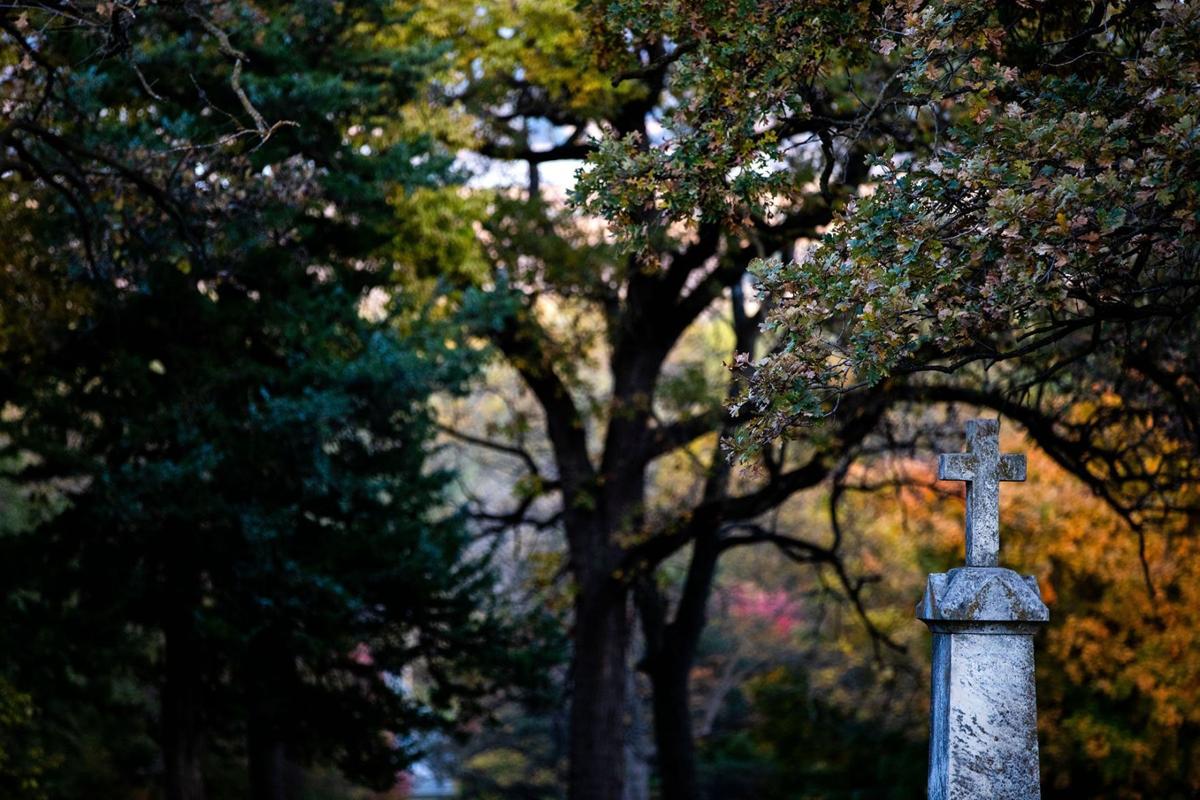 A cross of a tombstone is on display in the Bellevue Cemetery.

The museum’s Bellevue Cemetery Tour was moved to a Facebook Live event because of COVID-19. Frigid temperatures didn’t help, either.

More than 5,202 people are buried at Bellevue Cemetery. Early doctors, journalists, political leaders, war veterans and teachers are all represented among the graves.

Museum director Ben Justman took viewers on a historic stroll through the Olde Towne cemetery, first used in 1856, pointing out a number of interesting or notable graves:

• Chief Big Elk died 10 years before the cemetery was there. Chief of the Omaha Tribe.

“Big Elk was a political leader who really ran his tribe with efficiency and was well-respected,” Justman said. “He went to Washington D.C. twice to negotiate with the president. He continued to lead his people until 1846 when he died of a fever, which was really pretty common.”

Originally, Big Elk was buried on a high hill in Bellevue, near where the Missionary Society of St. Columban (Columban Fathers) are located today. When the site was selected for Bellevue College, Big Elk’s remains were dug up and reburied with a big headstone and about a dozen of his fellow tribesmen.

Eventually, the college was expanded again and Big Elk’s remains were moved to City Hall until 1954, when the Sarpy County Museum/Historical Society raised the money for a headstone. A bench in Big Elk’s memory was added to the site about 10 years ago.

• Fenner Ferguson was the first supreme court justice of the Nebraska territory, assisting the first territorial legislature in writing our first code of laws. After three years, he resigned and was later elected as a delegate for the territory in Congress.

• James Fowler is one of 38 Civil War veterans buried at the Bellevue Cemetery. He enlisted shortly after the war began, believed to have served in serious battles including the battles of Antietam, Fredericksburg, Chancellorsville and Gettysburg. He was wounded in the Battle of Chancellorsville, taking seven months to heal. Historical records show Fowler was the sheriff and jailer of Nemaha County, later becoming the commandant of the old soldiers and sailors home in Seward County.

• Robert Fletcher Gilder was an archaeologist who dug a lot around the Fontenelle Forest area and along the Missouri River. Gilder also produced many commissioned paintings of Nebraska landscapes, becoming well-known amongst Omaha’s elite. Some of his work can still be found on display at the Sarpy County Museum, as well as the Nebraska Art Museum in Kearney and the Joslyn in Omaha.

• James Gow served as Sarpy County judge for many years. He is a former resident of the Bellevue Log Cabin, commonly called the oldest building in Nebraska.

• Thomas Tibbles was a longtime journalist with a prominent career, former vice presidential candidate and a vocal advocate for Native Americans. Despite it all, Justman said he died in obscurity.

Justman asked that those who want to learn more about specific graves reach out to the museum.

“There are 5,200-and-counting people buried here,” Justman said. “Each one of them has a story and each is connected to Bellevue history, Sarpy County history and national/international.. We’re interested in learning more about them.”

The Sarpy County Museum provided the free tour to the community after having to cancel two big annual fundraisers.

A fundraiser set for Friday at Don & Millie’s will see 20% of proceeds go back to the museum. The fundraiser includes both drive-thru and dine-in orders from 4 to 9 p.m. when the customer mentions the museum.

The Sarpy County Courthouse, courthouse annexes, and Sheriff’s Office will be closed Nov. 26 and Nov. 27 in observance of Thanksgiving.

The Bellevue Little Theatre has rescheduled “Dial ‘M’ for Murder” auditions for December, the time to be decided in the coming weeks.

The Midlands Community Foundation Board of Directors has named four new members to its board. They are Rod Buethe, representing Gretna; Spence…

As the Thanksgiving holiday approaches and more drivers travel to see family and friends, the Sarpy County Sheriff’s Office is reminding all d…

The Bellevue City Council discussed and voted on the following at its Oct. 20 meeting:

Chief Big Elk’s grave inside Bellevue Cemetery. His remains were reburied here after previously being laid to rest in two other spots in the city. Elk was chief of the Omaha tribe and aligned with the United States in the War of 1812. A bench and tombstone honor Elk at his resting place.

A cross of a tombstone is on display in the Bellevue Cemetery.