Confidence is building in the Chieftains’ camp after a narrow defeat to No. 1 Gretna in pool play of the Papillion-La Vista Invitational on Friday, Sept. 16.

“They can compete with anybody,” Bellevue East head coach Casie Onken said. “And they’re seeing that now. I’ve said it but now they’re starting to believe it themselves. And I don’t have to say it because they know. That’s been a big difference.”

In the 3-0 loss to the Dragons on Friday, freshman starting pitcher Alisha McMurtry was perfect through the first three innings. Onken credited McMurtry for constantly fighting and learning “how to compete at the next level.”

“You can watch her focus and you can see her think about the pitch and hit her spots,” Onken said. “Where early in the year we were learning how to do that. And it’s a huge difference in her execution and the number of strikeouts and hits she allows.”

Against Gretna, McMurtry struck out nine hitters, and had just one hard hit out of the infield.

However, the Dragons were able to use small ball to defeat the Chieftains.

In the fourth inning, the first two Dragon hitters hit singles, the first on a bunt, to put runners on the corners. Gretna No. 3 hitter Megan Marshall bunted and was safe at first, scoring the first run of the game.

But McMurtry minimized the damage, and after striking out the side in the fifth, Bellevue East went into the sixth inning down just 1-0.

Even with an 8-12 record, Onken said the Chieftains have “constantly (been) in games,” and have gotten “better and better and closer and closer” as the season goes along.

“Gretna is a top of the line team,” Onken said. “We are in every game and we’re starting to win those games that are in the middle where before we still weren’t certain, and we’re really growing every game and (the players) can see it and they’re getting confident.”

Gretna tacked on a pair of runs in the sixth via another Marshall single and a sacrifice bunt by Brylee Rupiper. The Chieftains’ offensive struggles were evident against Alexis Jensen, who is establishing herself as the best pitcher in the state, racking up 18 strikeouts against the Chieftains.

“It’s just a matter of us being able to put the ball in play against a good pitcher,” Onken said. “And they (Gretna) were able to execute that and we are still working on that.”

Onken said putting the ball in play was the difference, and said the Chieftains might have lost some confidence against Jensen.

“(Jensen is) a very, very good pitcher and she’s tough to beat,” Onken said. “And (we needed to) have that confidence going up there to feel like you can still put the ball in play.”

In the second game of pool play against Lincoln North Star after the 3-0 loss to Gretna, the Chieftains fell 5-2.

The first three innings were scoreless before the Gators cleared the bases with a two-out single, before another made it 4-0. The Chieftains fought back, scoring in the bottom of the fourth on an error and sacrifice fly, but gave up another run in the fifth and couldn’t create more offense in a 5-2 loss.

On Saturday, the Chieftains where scheduled to face Millard South, but the rest of the Papio Invite was canceled due to rain.

Inside this week's Bellevue Leader: Sept. 21 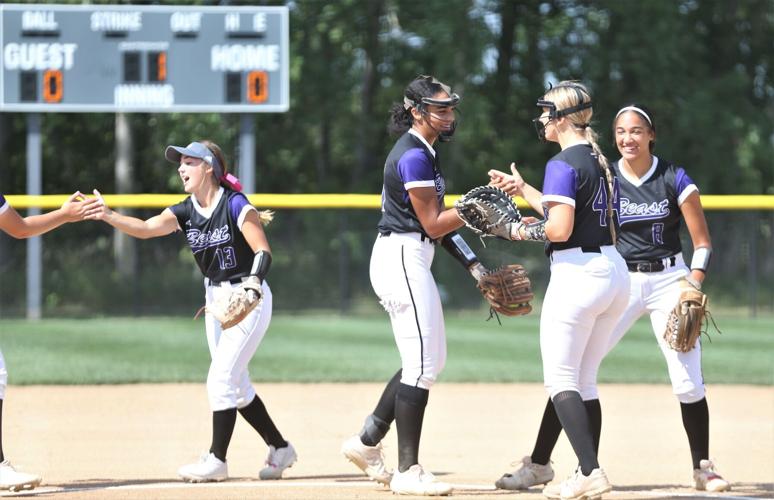 The Chieftains break huddle during the first inning of their 3-0 loss to No. 1 Gretna at the Papillion-La Vista Invitational on Friday, Sept. 16. 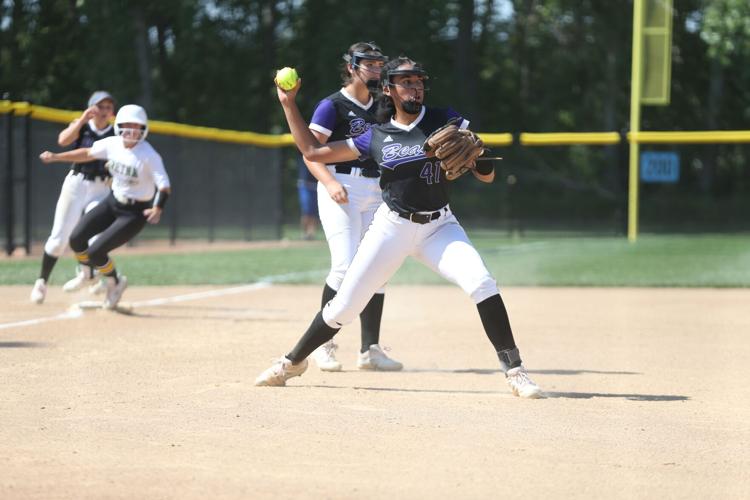 Bellevue East freshman starting pitcher Alisha McMurtry (No. 41) prepares to throw to first during the Chieftains’ 3-0 loss to Gretna in the Papio Invite on Friday, Sept. 16.