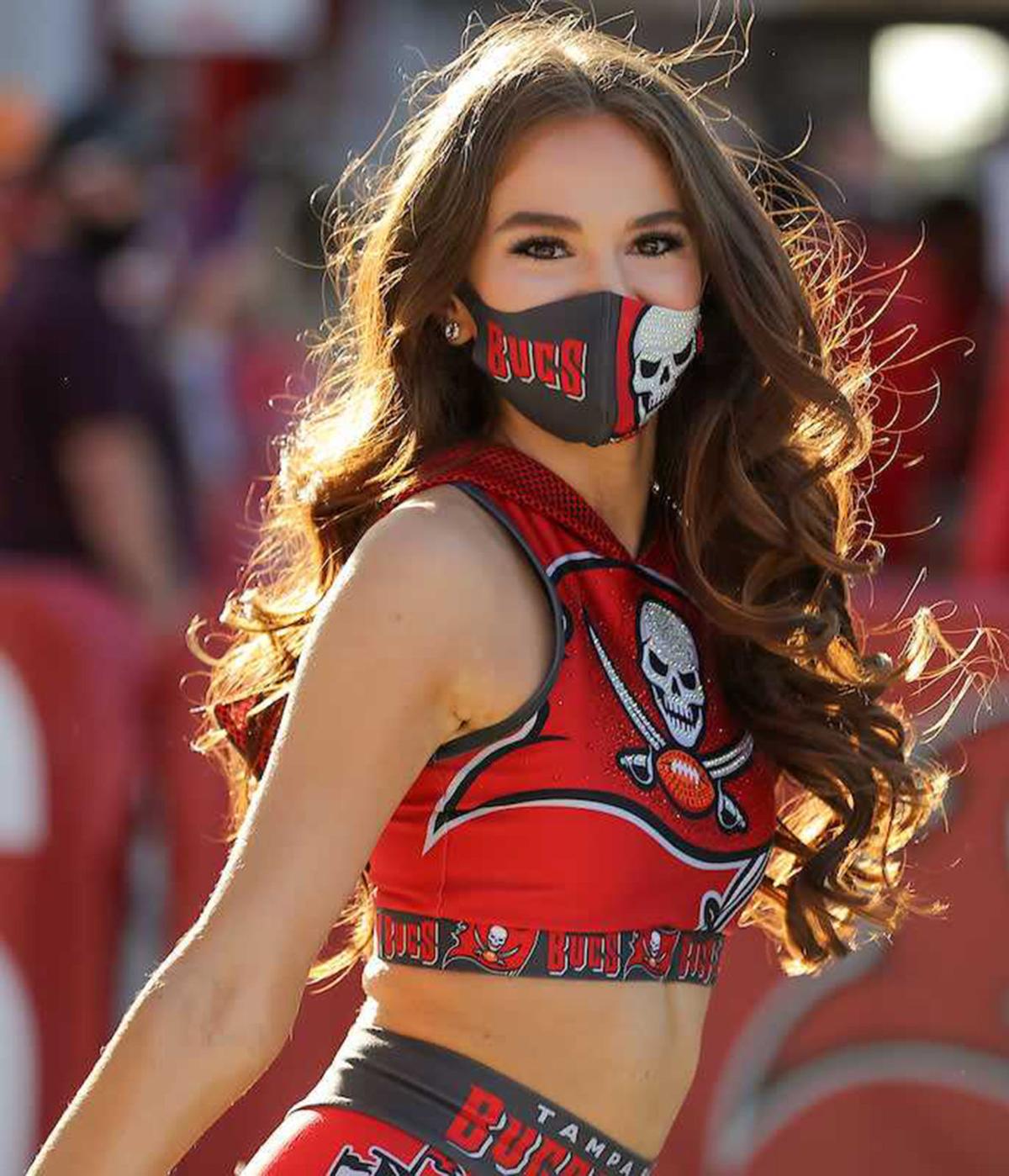 Miranda Serna graduated from Bellevue East in 2014 and is currently a member of the Tampa Bay Buccaneers cheer team. 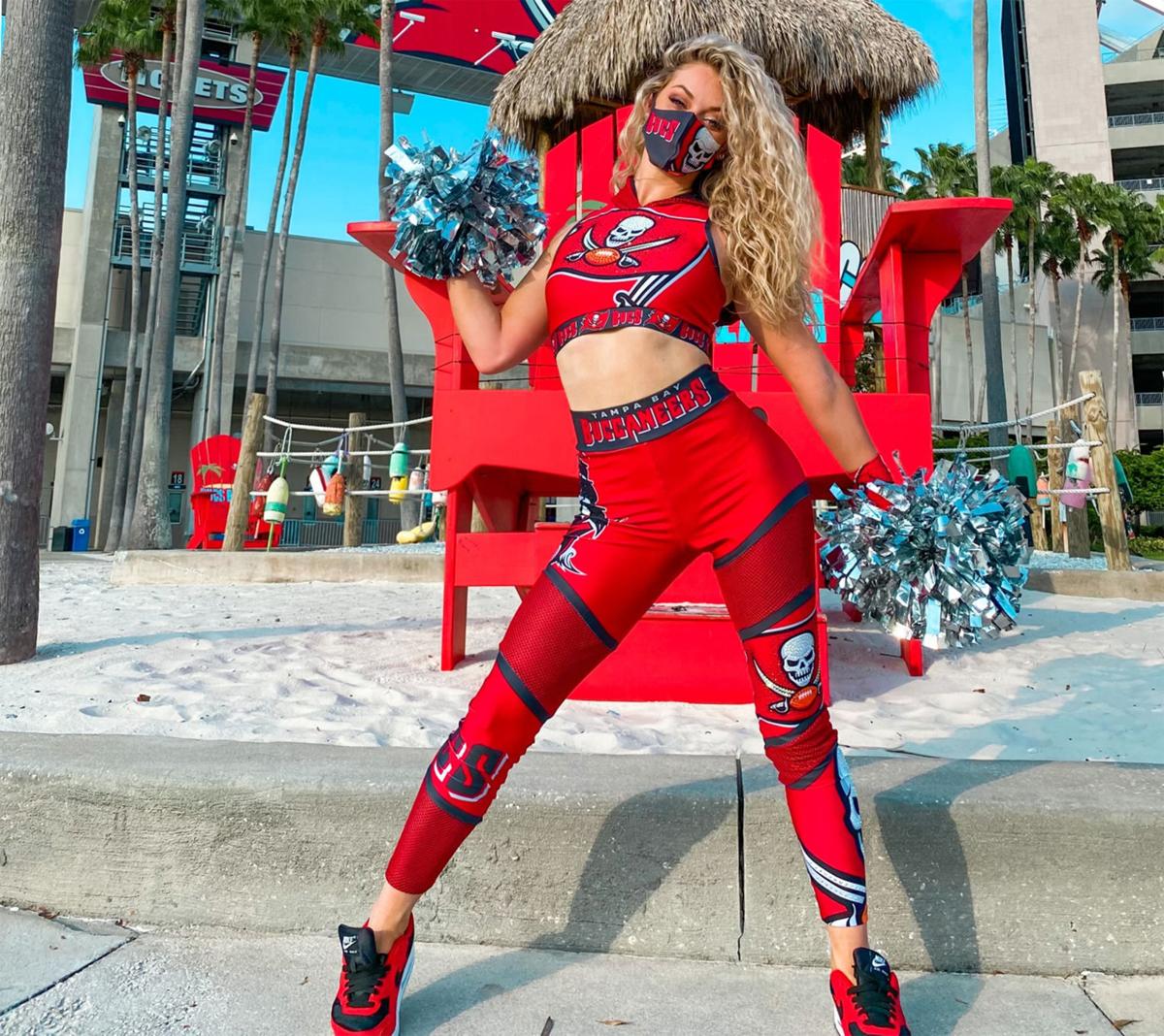 Erin McMaster graduated from Bellevue West in 2014 and now is a member of the Tampa Bay Buccaneers cheer team.

That team being the Super Bowl bound Tampa Bay Buccaneers.

“It’s unbelievable,” Serna said. “I think, as a cheerleader, you only get to do it for a handful of years and going to the Super Bowl is something that doesn’t seem like that would happen while I’m on the team.”

Since graduating from Bellevue East in 2014, Serna went on to dance for the University of Tampa for four years and was captain of the dance team for two of those years.

Serna said she has not stopped dancing since starting at the age of three.

“I love the dance team, like I just loved being around these like-minded individuals and doing these dances and performing in front of people,” Serna said.

Serna was not ready to let go of dance after graduating college and pursued cheering in the National Football League.

Serna is now in her third year with the Buccaneer cheer squad.

“I’m a professional dancer and I have amazing teammates and I’ve grown so much in the past two years as a dancer and it’s just something that’s so special to be a part of,” Serna said.

Serna’s high school dance coach, Kristin Wheeler, said she is proud of the work Serna has put into dance.

“It’s really cool to see one of the kids that you kind of raised in a sense, because I had her freshman year of high school to her senior year, just grow up and watch her become successful,” Wheeler said.

Wheeler said Serna was always an advanced dancer, worked hard and became captain her senior year garnering All-American honors and through the National Dance Alliance earned the Excellence in Leadership Award out of the entire 300-person camp.

“She was always destined for greatness, for sure,” Wheeler said.

Serna would not be the only Bellevue cheerleader in Florida for long.

McMaster went to the University of Nebraska–Lincoln after she graduated from Bellevue West in 2014 but was not a part of the dance team like she was at Bellevue West.

“I felt like something was missing,” she said. “I studied dance in college, but I wasn’t on the dance team in that sort of environment, which is a completely different atmosphere and I missed it a lot.”

McMaster said when the Magic cut its dance team and turned into a crew is when she started to look at dancing in Tampa Bay.

This is McMaster’s first year on the Buccaneer cheer squad and she did not expect to appear in the Super Bowl as fast as she did.

“I would say I definitely could see myself having worked hard enough to make a team and hopefully eventually go to the Super Bowl,” McMaster said. “I mean, obviously you can’t pick who’s on your team or your football team.”

“It’s one of those things where you can just feel it in you and you’re meant to do something, you know, it just feels right.”

McMaster said her dad is from Massachusetts and has been an avid Patriots fan his whole life.

“For a while I was a big Patriots fan and then Tom Brady went to the Bucs and I thought, ‘Oh my gosh, this couldn’t be more perfect,’ because I had already had plans to audition for the Buccaneers, but I didn’t know that I was going to get to dance for Tom Brady’s team,” McMaster said.

The coronavirus has changed aspects of most people’s day to day lives and the Buccaneer cheer team is no different.

Normally, auditions would be in person but this year they were moved to a virtual format.

Either way, cheer tryouts for an NFL team are extensive.

For a normal year, tryouts start out with an open call where anybody can show up.

Staff will teach four eight counts of a routine that the cheer team hopefuls will then have to immediately perform in front of judges.

After this stage, around half of the auditions are cut.

The same day those trying out will learn a full minute routine they will have to perform in front of the judges right away.

After this, half of those remaining will be cut.

The top quarter of people will then move on to training camp which is around two weeks long.

Serna said during training camp, the cheer team will practice twice a week for two weeks and will be tested on football knowledge and about the Buccaneers organization.

After training camp, the cheer team hopefuls are put through a fitness test consisting of a run that is a little over a mile, pushups, sit ups and planks.

Auditionees are then subject to a panel interview with four or five judges.

Afterward, there is a photo shoot followed by auditionees learning four dances to be performed in front of the judges.

Serna said before COVID-19, the Buccaneers would allow a public audience for the last day of auditions.

On the last day of auditions, the cheer team hopefuls perform the four dances and then at the end of the day those that made the team are announced.

Serna said it was a relief when she learned she made the team for the first time.

“It’s definitely like, ‘Oh, I don’t want to get my hopes up, but I’m really excited because I do really want to make it,’ but you’re surrounded by so much talent, it’s hard not to compare yourself,” Serna said. “Actually hearing your name called is like the world stops and it’s you and your moment and getting your pom-poms and that you’ve officially made it.”

McMaster said she did her virtual tryouts this year in her hometown of Bellevue and used high school dance costumes during her auditions.

Serna said this year because of the coronavirus, dance has become more physically demanding.

We went from practicing inside to practicing outside in Tampa Bay, so it’s a lot harder than we’re used to without air conditioning,” Serna said.

Serna said every time the cheer team is together they all have a mask on and are distanced six feet apart for safety.

On game days, the cheer team would normally walk around the stadium but now, because of COVID, the team is in one place dancing the entire time.

McMaster said she was grateful to have Serna as a person to reach out before team tryouts.

They were both captains their senior year at their rival high schools.

‘I would say I was really into the rivalry in high school, but now that I’m not in high school anymore, I’m not into it, ”McMaster said. “So I’m able to put that aside, and be super cool friends with Miranda.”

“It was really cool to be able to reach out to her before I auditioned and ask some questions for help in terms of what I need to do to make the team.”

Serna said she has enjoyed having someone else from Nebraska on the team.

“I think dance is such a small world, but normally being from Nebraska was just very unfamiliar anyway,” Serna said. “So then that there are two of us from Bellevue, Nebraska, is pretty cool and we’re on the same team and now we’re both getting to go to the Super Bowl, which is great.”

When McMaster is not cheering, she works full time at Disney World and Serna teaches college math at Jersey College.

Bellevue University has been selected as one of College Factual’s Best Colleges for Diversity in the United States for 2021.

After suffering a hard-fought loss against one of the nation’s best in Sunrise Christian Academy on Feb. 13, the Bellevue West Thunderbirds bo…

The Defense POW/MIA Accounting Agency said identifications of the 92nd Infantry members, known as "Buffalo Soldiers," have been difficult because of the lack of DNA samples from family members.

The Bellevue West’s girls varsity basketball team’s senior night on Feb. 19, was spoiled by the Omaha Central Eagles as they handed the Thunde…

The City of Bellevue Police Department held their recognition, promotion and awards ceremony on Feb. 11 in the Criss Auditorium at Bellevue Un…

Miranda Serna graduated from Bellevue East in 2014 and is currently a member of the Tampa Bay Buccaneers cheer team.

Erin McMaster graduated from Bellevue West in 2014 and now is a member of the Tampa Bay Buccaneers cheer team.