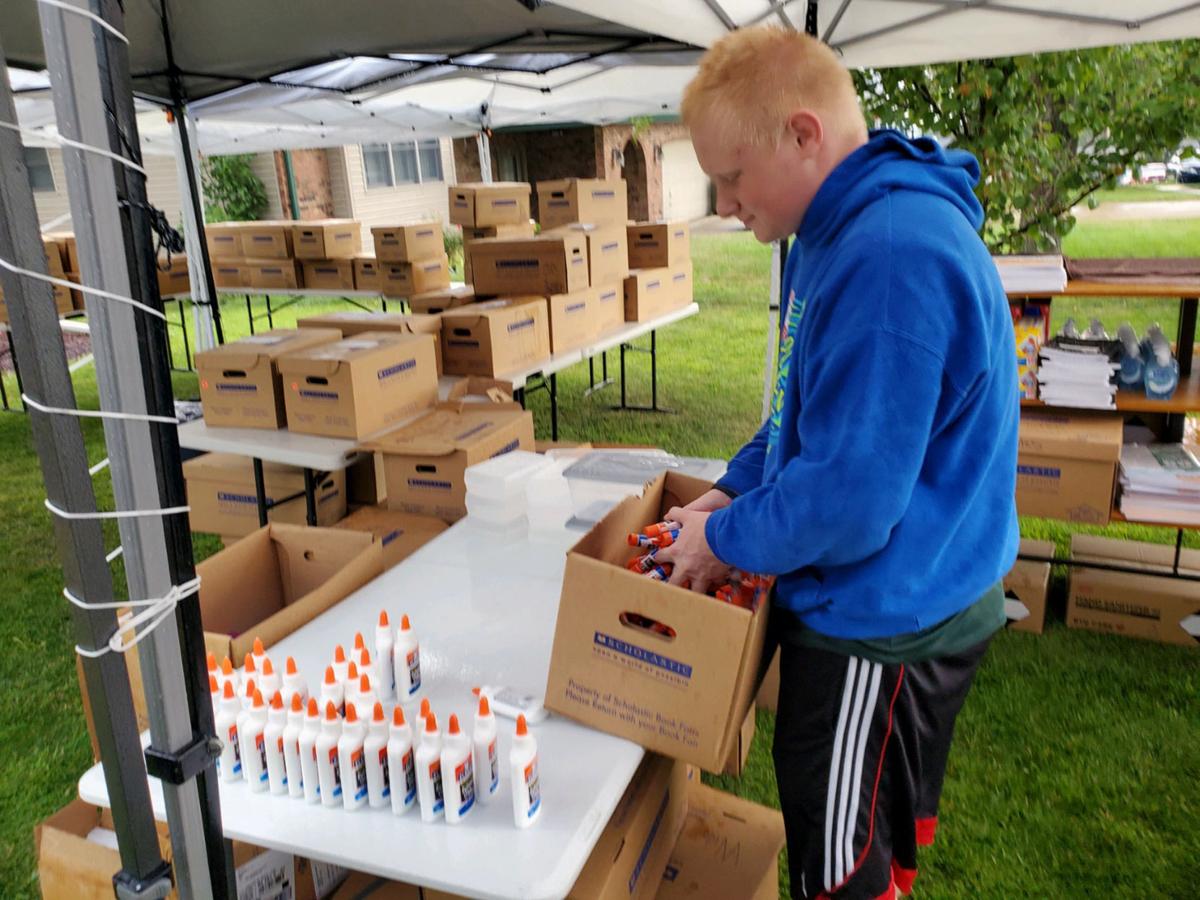 Jackson Carper organizes school supply donations prior to his packing party on Aug. 5. Carper coordinated the party as his Eagle Scout project, creating a student database and organizing supplies for The Dragon’s Closet Back-To-School Giveaway. 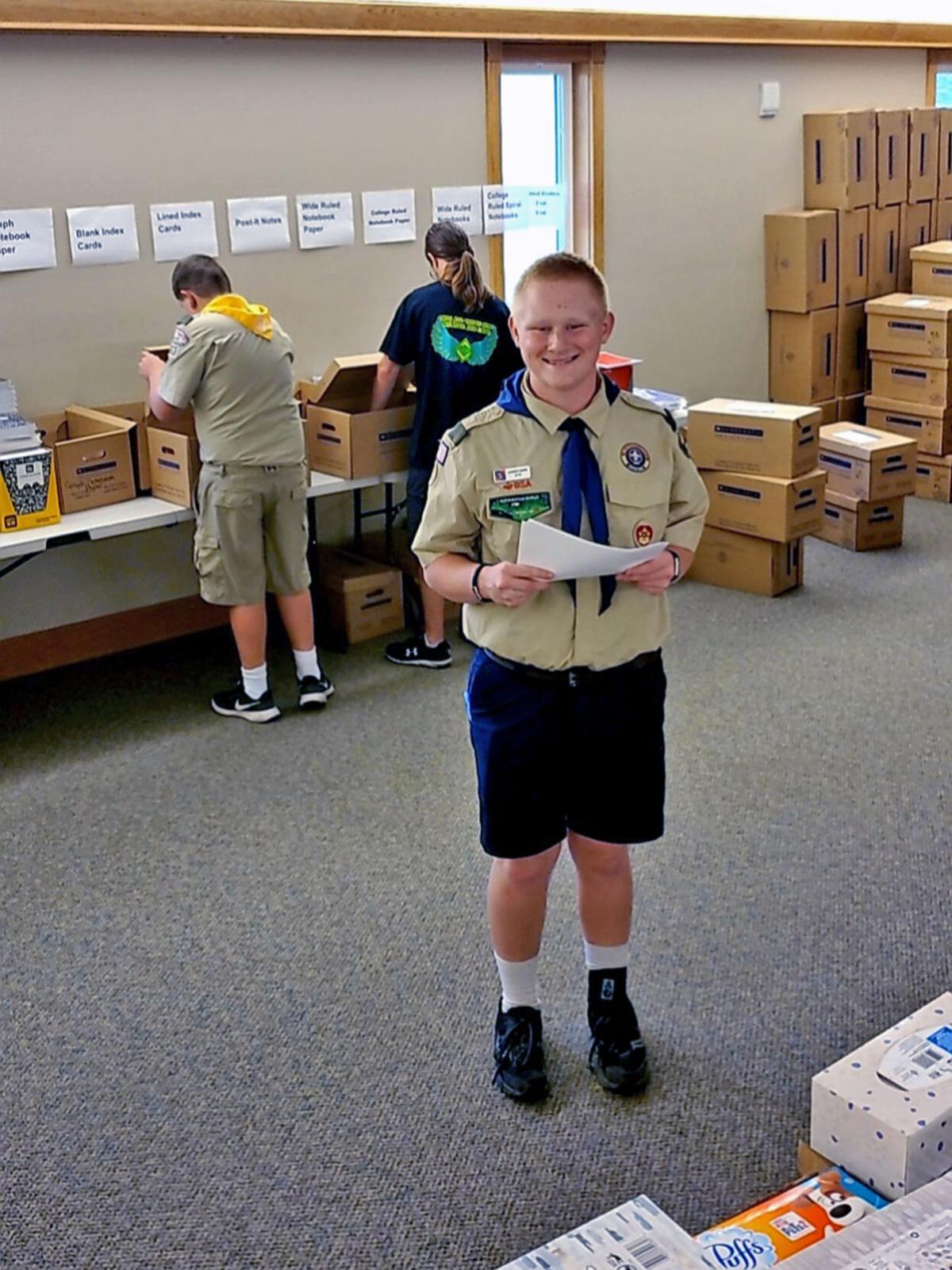 Jackson Carper at his school supply packing party on Aug. 5. Carper coordinated the party as his Eagle Scout project, creating a student database and organizing supplies for The Dragon’s Closet Back-To-School Giveaway.

Carper, a homeschooled Gretna senior, coordinated a packing party for the annual Dragon’s Closet Back-To-School Giveaway on Aug. 7 in efforts to earn his Eagle Scout, the highest rank available to members of the Boy Scouts of America.

The project was coordinated between Carper and Rachel Eastman, who runs The Dragon’s Closet, modeled after a similar project completed by Eagle Scout Colin Sweeney in 2019.

“I love serving my community and thought this would be the perfect project for that,” Carper said.

After completing paperwork and getting his idea approved by the Mid-America Council, Carper sought supplies. Scholastic donated 110 boxes to fill while local residents and businesses donated the items to put inside the boxes.

He sorted and counted supplies, organizing them in boxes around the Gretna Baptist Church auditorium for the packing party on Aug. 5.

“It went really, really well,” Carper said. “We originally scheduled about two hours for the packing party. It only took us about an hour with the amount of help that showed up.”

That allowed the Scouts to use the remainder of their time transporting the boxes back to The Dragon’s Closet, getting them separated by school and organized for the upcoming giveaway.

An influx of donations from local businesses provided an abundance of supplies, allowing The Dragon’s Closet to welcome walk-ins alongside the prepackaged boxes.

The project played into Carper’s organizational strengths, aided by prior experience organizing donations — shoes, in particular — during the 2019 flood relief efforts by Gretna Baptist Church in 2019.

“Going into the packing party, it was pretty easy to set up because of organizational skills,” Carper said. “It really feeds my soul almost, to have things look nice. Organizing is what I like to do.”

Due to some health issues over the past couple of years, Carper sought a project that was less physically demanding than one of the more typical building projects completed by many Eagle Scout hopefuls.

Though the packing party was less strenuous, it certainly wasn’t less work, said Kendra Carper, Jackson’s mother. He spent hours creating a database — the “biggest part of the project” — of all the students needing assistance with school supplies, comparing each student’s grade level and school with customized supply lists, which vary from school to school and grade to grade.

Involved with Scouting since the first grade, Carper said he saw older Scouts in the Troop earning their Eagle rank from a young age.

“They seemed really important and kind of helped lead me as a first year, getting used to the environment of the Troop,” Carper said. “I thought that was really cool. Ever since I joined, I wanted to be an Eagle Scout someday.”

As he got older, the Eagle Scout rank also appealed to Carper, who wished to add the honor to his college applications.

“A lot of thanks to go out, especially to the church and to Rachel for their help with this,” Carper said. “I don’t know any of them, but thanks to all the donors that gave the supplies we need and to the adult leadership in the troop for really pushing me along.”

“He’s a gem,” Jackson’s mother, Kendra, said of Wasalaski. “He’s been a constant encouragement and he’s done everything he can to help Jack achieve Eagle.”

Carper has a few merit badges to finish before his Eagle Scout is complete. He hopes to complete them by the end of the year, incorporating his Court of Honor with his high school graduation next spring.

“Jack did wonderful with his Eagle,” said Eastman, Dragon’s Closet organizer. “I could not have been prouder of him. He really took charge.”

City staff are working closely with newly-annexed residents, as demonstrated by a new city ordinance -- spurred by a letter from a property ow…

A local woman’s attempt to spread Christmas cheer is not going unnoticed.

Jackson Carper organizes school supply donations prior to his packing party on Aug. 5. Carper coordinated the party as his Eagle Scout project, creating a student database and organizing supplies for The Dragon’s Closet Back-To-School Giveaway.

Jackson Carper at his school supply packing party on Aug. 5. Carper coordinated the party as his Eagle Scout project, creating a student database and organizing supplies for The Dragon’s Closet Back-To-School Giveaway.