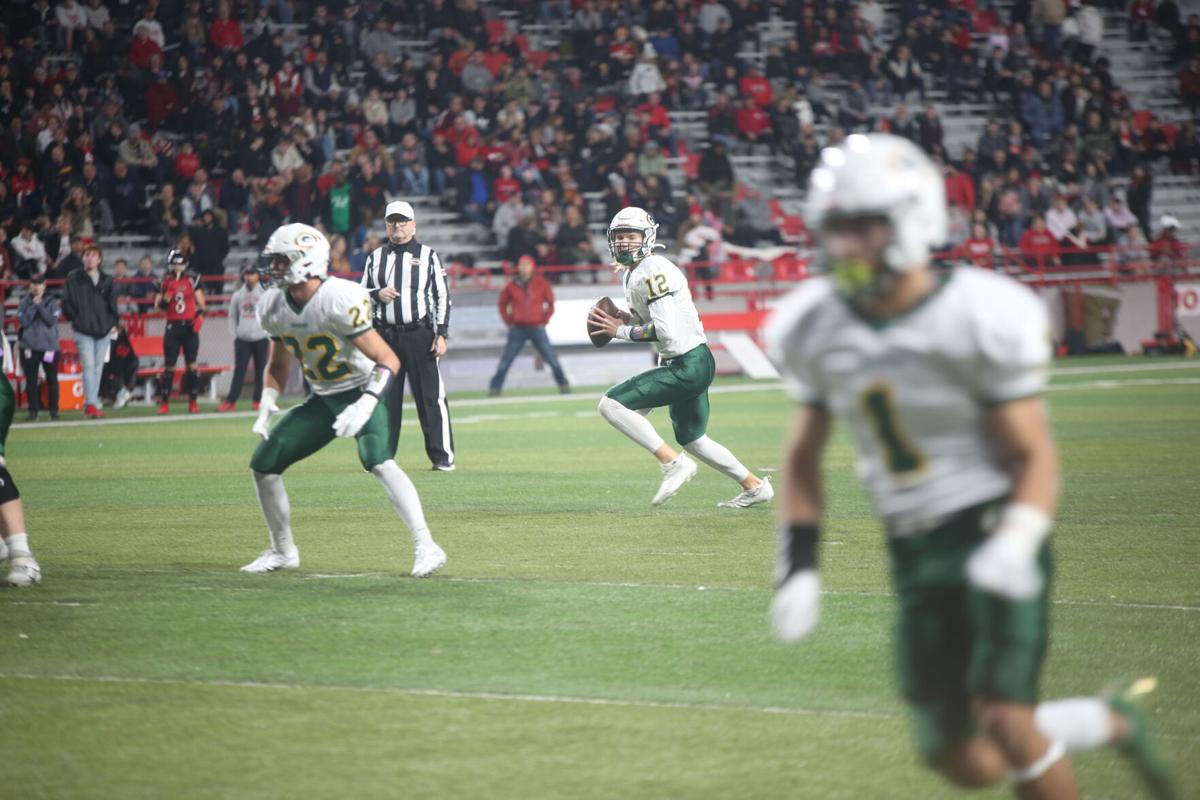 Gretna Quarterback Zane Flores looks for an open receiver on Nov. 23 against Omaha Westside in the state championship game at Memorial Stadium. Gretna won its first ever title 7-3 against Westside. 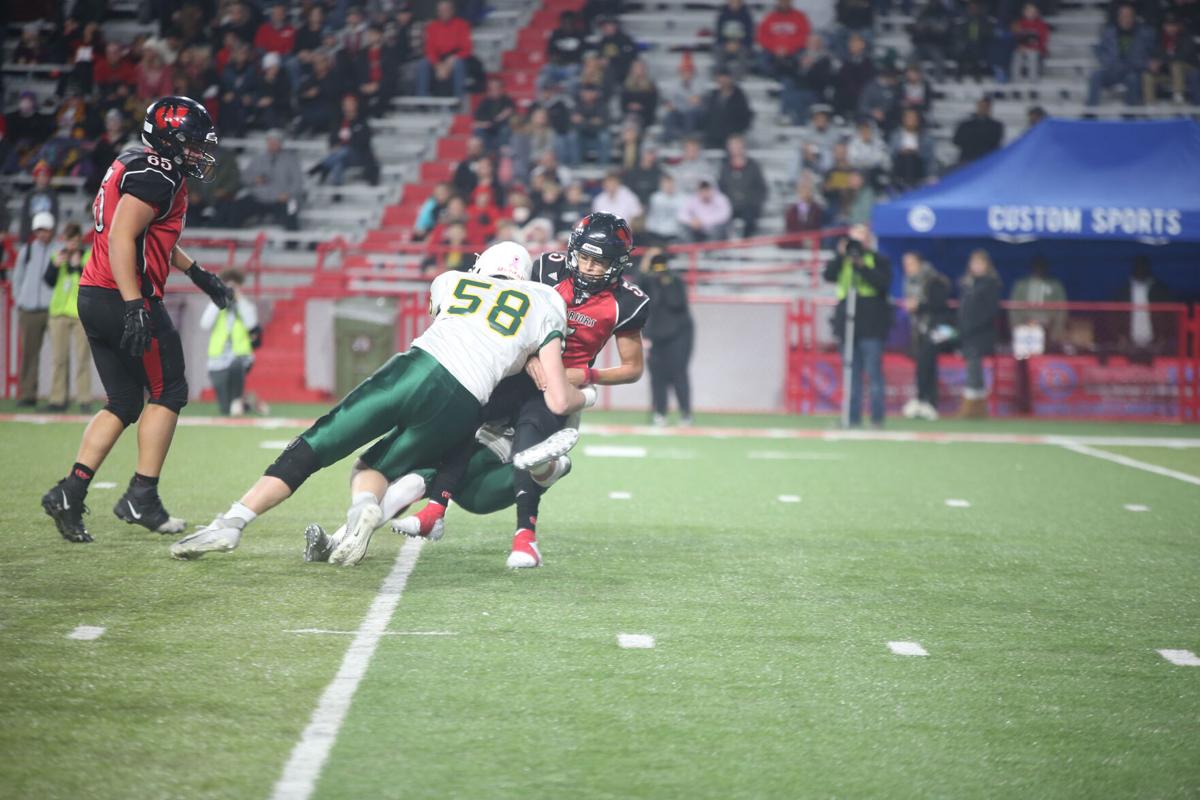 The Gretna defense held Omaha Westside to three points during the Class A championship game on Nov. 23. 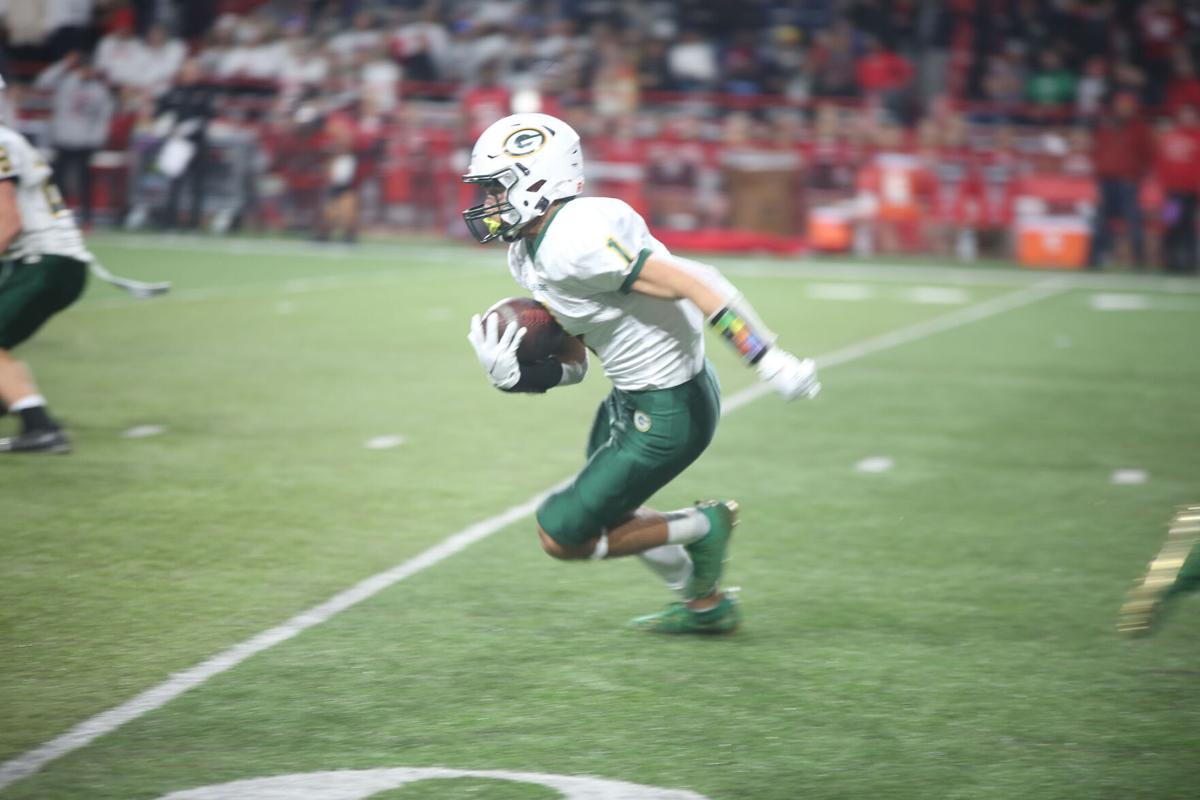 This time-old moniker rang true on Tuesday, Nov. 23 as the Gretna High School football team gutted out a 7-3 win in Class A state championship game against defending champs Omaha Westside.

The Gretna defense shined throughout the night and made a final stand at the five-yard line with two seconds left in the game.

The first and only touchdown would be scored by Gretna in the fourth quarter.

After throwing a deep pass to wide receiver Joe Roll ending at the Westside two-yard line, quarterback Zane Flores put Gretna ahead 7-3 with a sneak with six minutes and 55 seconds left to play in the fourth quarter.

Westside did not go down without a fight.

On their last drive of the game, Westside drove down the field and ended up at the Gretna one-yard line with 31 seconds left to play in the game.

Westside then attempted to rush the ball but were stopped. The Gretna defense was called for a pass interference play with two seconds left in the game.

It all came down to one final play.

Westside attempted an end-zone pass but was way off and Gretna celebrated its first ever state title win.

"Unbelievable game. Westside is a storied program and for us to come down to the wire with them and just make a play at the end, I'm extremely proud of these kids," Gretna head coach Mike Kayl said. "I'm happy for the town of Gretna, this crowd has been awesome."

Gretna limited Omaha Westside to 273 total yards and three points. According to Max Preps, it was the lowest points total for Westside since a 2016-17 loss to Creighton Prep.

Both teams presented a stout defense.

The Warriors went three and out on their first drive.

Flores connected with wide receiver Joe Roll for 45-yards on their first drive. Gretna then got aggressive and went for a fourth down conversion in the first but were stopped by Westside linebacker Curt Cubrich.

Gretna defensive back Blayke Moore got the first pick of the year off Westside quarterback Anthony Rezac and gave Gretna the ball at the Westside 42-yard line.

But Gretna was unable to score off the turnover.

Gretna then caused another scoreless drive from Westside, but would miff a punt return and gave the Warriors the ball.

The Warriors drove down the field but were held to a 26-yard field goal to put Omaha Westside up 3-0 with one minute and 54 seconds left in the first half.

Gretna was not deterred and marched down the field to the Westside 12-yard line. Time then ran out in the first half for the Dragons after a throw to the end zone, with the clock running and after an illegal substitution penalty was called on Gretna.

There was some debate around if the clock should have been stopped due to a spiked ball by Flores at the time the penalty was called.

The clock running was a mistake on the official’s part, due to a rule change implemented two years ago by the NSAA. If the there is under two minutes, the offended team -- in this case Gretna -- can choose to the run the clock on ready or at snap. The officials should have asked Gretna their preference.

The Gretna special teams attempted a 46-yard field goal but were blocked by Omaha Westside with eight minutes and 57 seconds left in the third quarter.

No team scored during the third quarter and the scoreboard did not change well into the fourth before Flores' sneak. Followed by one last stand by the Dragon defense.

Kayl said his team is full of heart.

He said the biggest thing he told the team at halftime was to quit hurting themselves.

"We've done a real good job at the end of the season, finishing games in the second half, after that first Elkhorn South game, we learned our lesson. So, we came out second half and we took care of ourselves and just played sound and made the plays that we needed to," Kayl said.

Kayl said he was not surprised by the low scoring.

"It's two teams that they might bend a little bit, but you get down to the red zone they're just going to refuse to try to let the other team in the end zone," Kayl said.

Flores was ecstatic after the win.

"To see all our hard work, our senior’s leadership throughout the year, our defense was amazing to see all the work pay off, it's awesome," he said.

He said the team knew it was going to a dogfight of a game.

"We thought there'd be small points on the board. We could have (scored more), we left some out there," Flores said.

Flores also gave credit to the defense for keeping Gretna in the game.

"Our defense was doing a great job and on offense we knew we were moving the ball; we just weren't finishing the drives. So, we knew we had everything there," Flores said.

In total Gretna had 352 total yards with 320 of those being from the pass game.

Gretna ends the year 12-1 with their lone loss of the season coming against Elkhorn South -- a loss they avenged in the second round of the playoffs.

Gretna Quarterback Zane Flores looks for an open receiver on Nov. 23 against Omaha Westside in the state championship game at Memorial Stadium. Gretna won its first ever title 7-3 against Westside.

The Gretna defense held Omaha Westside to three points during the Class A championship game on Nov. 23.