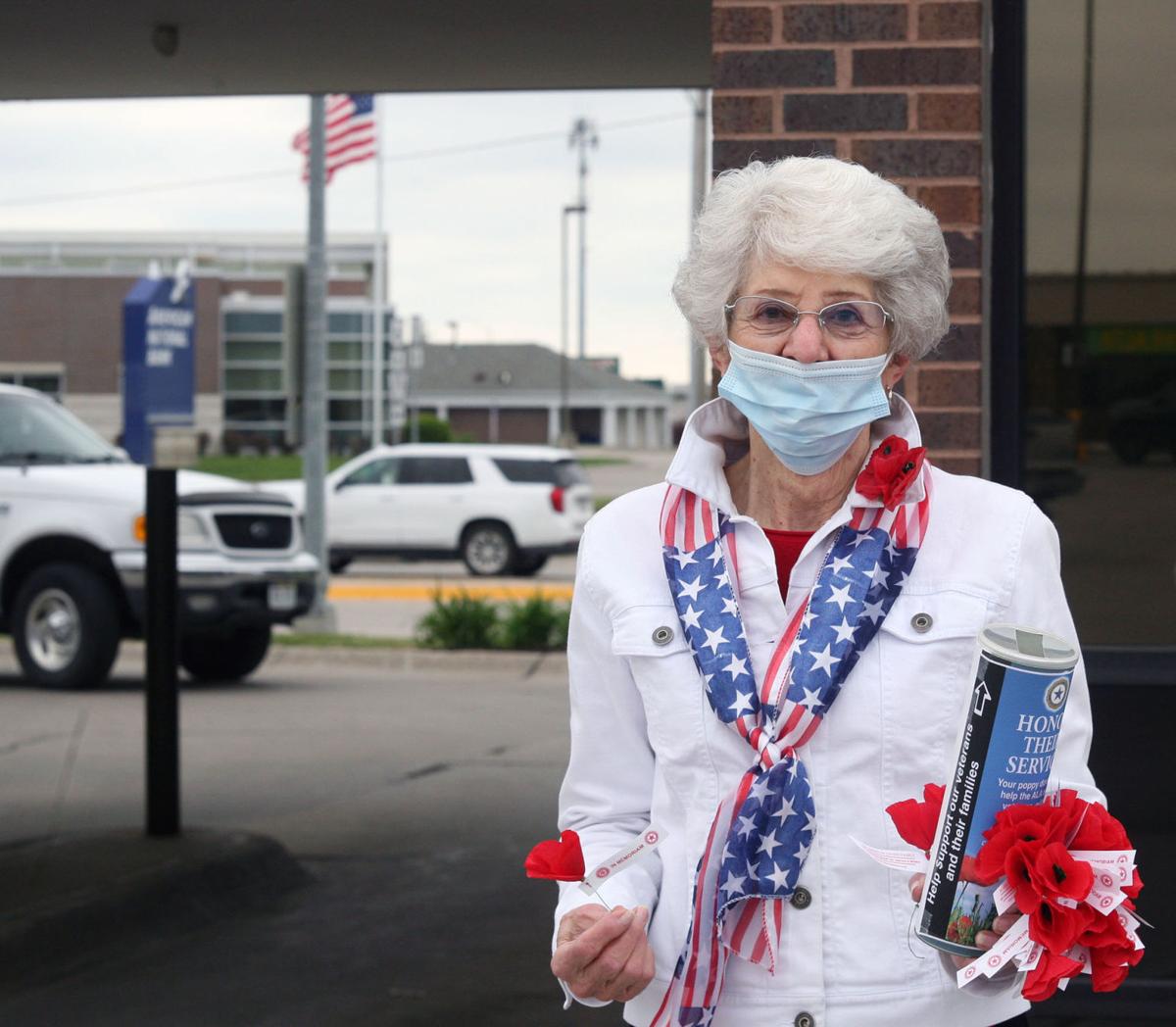 Kathy Iske distributes poppies at Pinnacle Bank on May 15 in honor of the upcoming National Poppy Day (May 28) on behalf the Gretna American Legion Auxiliary.

With Memorial Day on the horizon, the American Legion Family encourages the community to wear a red poppy on National Poppy Day: May 28, 2021, to honor the fallen and support the living heroes who have worn our nation’s uniform.

The Gretna American Legion Auxiliary distributed poppies to the community in the morning on May 15, Armed Forces Day. Members of the community were encouraged to make a donation in exchange for a Poppy, with all donations providing support for the future of veterans, active-duty military and their families with medical and financial needs. Donations can also be sent to the Gretna American Legion Auxiliary at PO Box 204, Gretna NE 68028.

“Wearing a poppy the Friday before Memorial Day is a reminder to remember those who have made the ultimate sacrifice and is a symbol of hope for the generations to come who will answer our nation’s call to military service,” said Lindsay Brown, American Legion Auxiliary Unit 216 president. “It is important for Americans to remember that we have an entirely new group of veterans. Supporting them and their families is absolutely essential.”

The red poppy came to symbolize the blood shed by those who fought and those who continue to fight for our country following World War I. It was popularized by the publication of the wartime poem “In Flanders Fields.” Written by Lieutenant Colonel John McCrae, M.D., while serving on the front line in World War I, the poem honors soldiers killed in battle. In 1920, the poppy became the memorial flower of The American Legion Family.

The American Legion Auxiliary is a community of volunteers serving veterans, military and their families. Members also support the mission of the American Legion in improving the quality of life for our nation’s veterans. Proud sponsor of ALA Girls Nation, high school scholarships, National Poppy Day and recognized for advocating for veterans on Capitol Hill, the more than 600,000 ALA members across the country volunteer millions of hours annually and raise millions of dollars in service to veterans, military and their families. Founded in 1919, the ALA is one of the oldest patriotic membership organizations in the USA.

To learn more about the Gretna unit, volunteer, join or donate, contact Kathy Mazur at 402-659-6689 or mazur_kathy@yahoo.com.

Kathy Iske distributes poppies at Pinnacle Bank on May 15 in honor of the upcoming National Poppy Day (May 28) on behalf the Gretna American Legion Auxiliary.