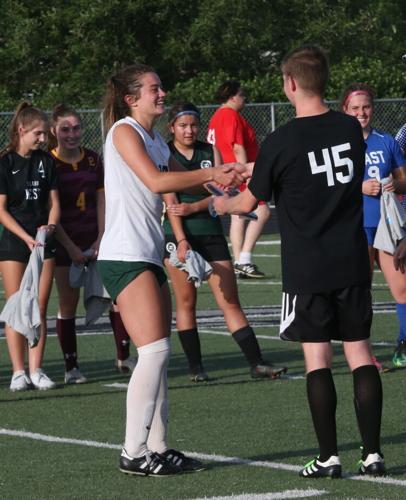 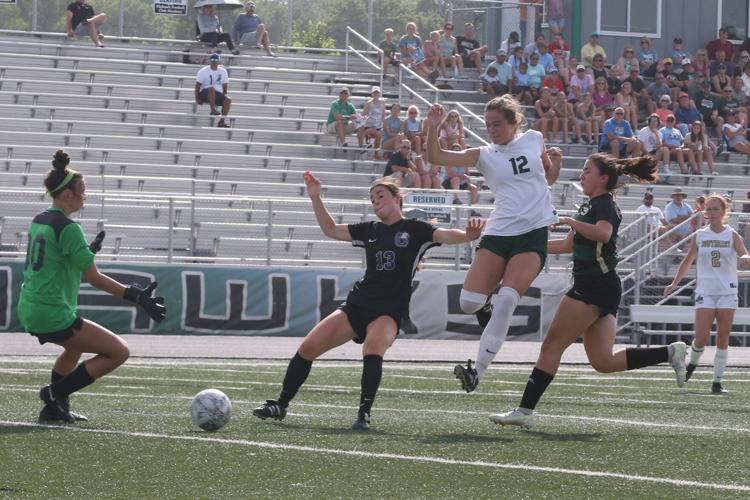 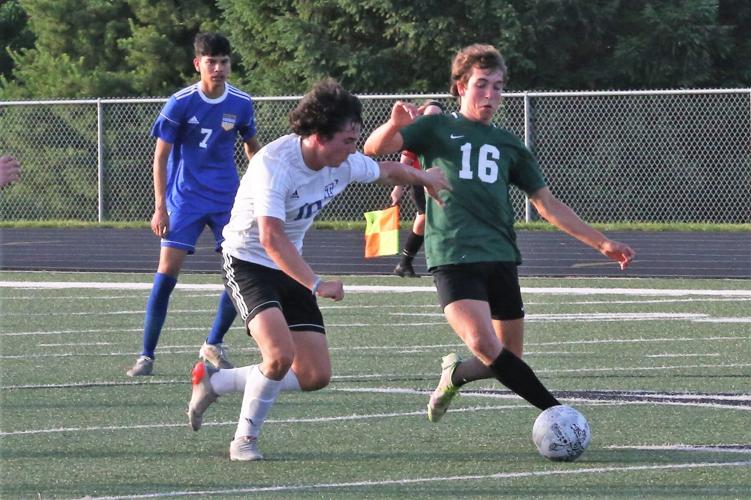 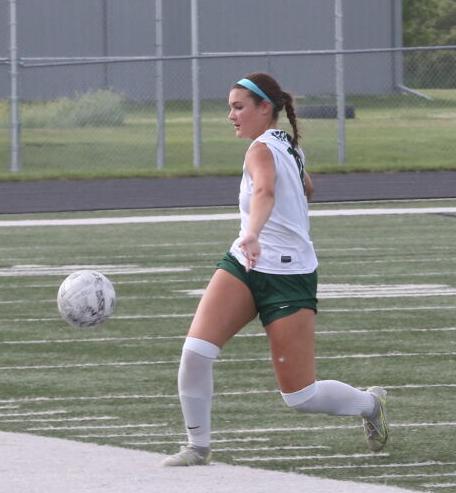 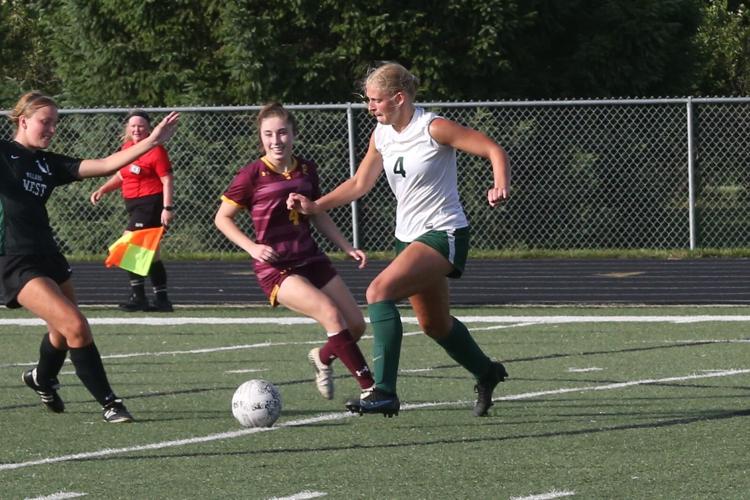 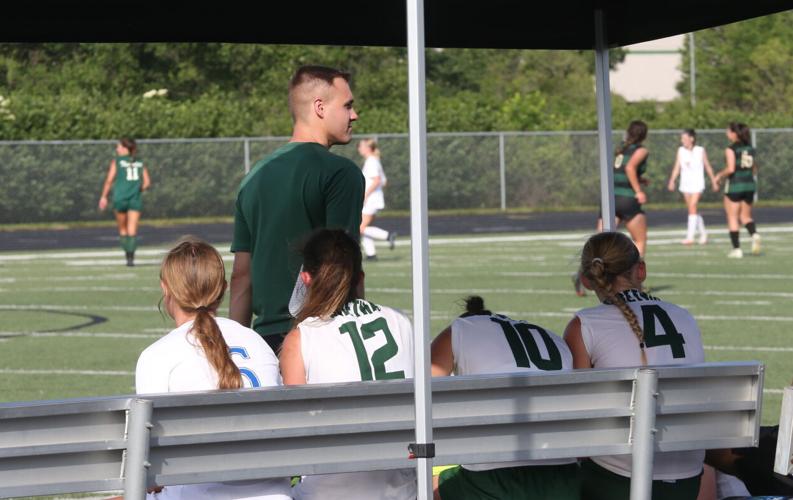 Gretna head coach Chace Hutchison (center, wearing green) on the sidelines one last time with Dragons Savannah DeFini (No. 12), Sydney Zabloudil (No. 10) and Chaley French (No. 4) during the Nebraska High School Soccer Senior Showcase on Saturday. 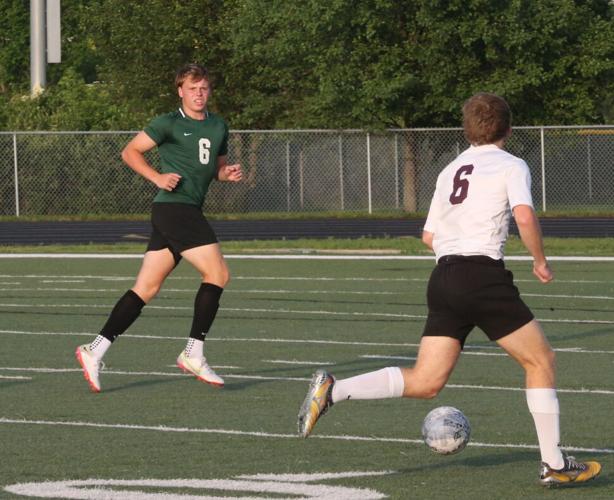 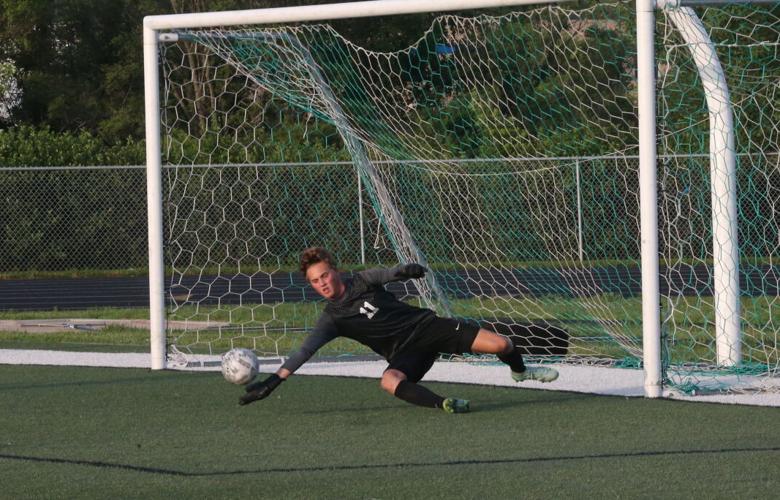 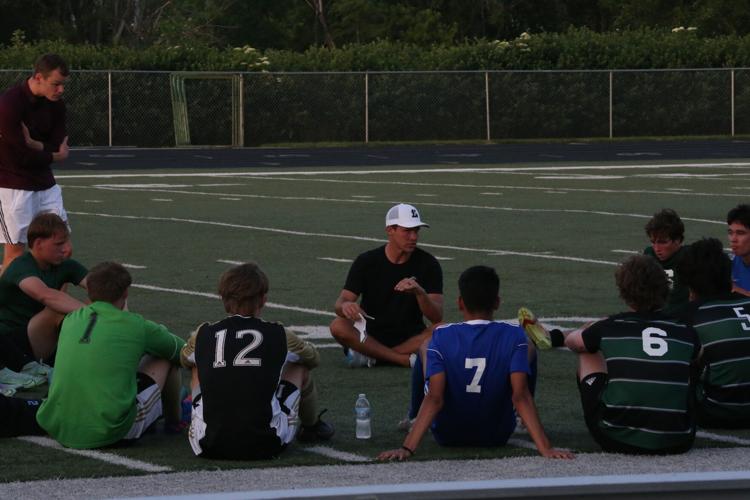 Savannah DeFini and Joey Witt of Gretna soccer both won MVP in their respective games during the Class A Nebraska High School Soccer Senior Showcase at Omaha Skutt Catholic on Saturday.

In the girls’ game, DeFini got the scoring started for the the Specialtees light team. Dragons teammates Chaley French played a through ball that DeFini ran onto and finished into the back of the net for a 1-0 lead.

After the break, DeFini delivered a low cross into the box that was finished by Lincoln Southeast’s Rachel Warrick to tie the game at 2.

Then, with 14 minutes left, the connection to start the scoring was flipped as DeFini assisted French to give the light team a 3-2 lead.

“It’s a good dynamic duo, good way to go out for sure,” French said.

Less than one minute later, the dark team leveled the score again.

The last 13 minutes were scoreless, and the game went to penalties. In penalties, French, DeFini and Sydney Zabloudil all took and converted penalties as Specialtees won 5-4.

“It was super fun,” said Zabloudil, who will be attending the University of Kansas next fall. “It wasn’t taken too seriously, but it’s good to have one last game. It’s very bittersweet, and I’m glad I got to play with some of my high school teammates and girls I know from club. So (it was) definitely good.”

French and DeFini are both heading to Illinois to continue playing soccer, French to Illinois State and DeFini to Southern Illinois University-Edwardsville. The two will face off as opponents on August 8 in Normal, Ill., at 6 p.m.

“It was really fun to be selected and a huge honor,” DeFini said. “I’m definitely gonna miss the team and the atmosphere and the players and the support I’ve gotten throughout the years and it was just cool to come out one last time and we went out with a banger, had some goals. Chaley and I lift in the morning together, so we were just talking about it, we’re like, it’s our last time playing together.”

“It’s a huge honor,” French said. “And it’s just great to see everyone come together and have some fun and play one last soccer game for the high school.”

“They put on a show tonight,” said Gretna head coach Chace Huthcison, who coached the Specialtees team on Saturday. “It’s fun to watch one last time before they go off to college in about three weeks. ... Every moment with them is a great one. All three of them, Chaley, Savannah DeFini and Syd, they’re just really high character people, they’re gonna do great things in college and then the next phase of their life. They’re great soccer players, it was a fantastic year with them and to get one more game, not every coach gets that. So it’s a big blessing for me.”

After the conclusion of the girls’ game, the boys game began with a flurry from Neurology Consultants light team, which scored three goals in the first 36 minutes to take a commanding lead.

But with one minute left in the first half, Gretna’s Joey Witt scored with a diving right-footed finish to cut the deficit to 3-1 at halftime.

Soccer Internationale scored a second goal halfway through the second half, and Witt found the net again to tie the game at 3-3 at the hydration break with 19:24 left.

A fourth goal with ten minutes left gave the dark team a 4-3 lead, which they held onto for the win. With two goals, Witt earned MVP honors.

“It means the world honestly,” Witt said. “I can’t believe it’s my last time in this jersey. There’s just a lot of emotion. To win state, that was a good way to cap it off, but this is even better.”

Witt, along with teammates at Gretna and on Saturday, Alec Scharff and Carson Poole, will continue playing together at Benedictine University in Atchison, Kanas.

“I’m excited,” Witt said. “I think it’s good because we all push each other to keep getting better. ... It’s great to continue my career with my boys, they push me, it’s just a good relationship.”

“It’s so special,” Scharff said. “I get to play with my best friends for another four years. And with how much we’ve won together and everything, hopefully we win even more down there. It’s just so much fun to think about.”

“I think going into it with both of them is really cool and it’s gonna make it a lot easier heading in there,” Poole added. “I’ll have two familiar faces with me, I think we’ll just be able to go into it together and not alone, obviously.”

For both Scharff and Poole, being able to wear a Gretna jersey one last time was a special experience.

“It’s sad but it was fun,” Scharff added. “We went out on top of state and everything, so this is just a little bit of a fun last time.”

The three Gretna players were also coached one last time by their high school head coach Tyler Ortlieb, who said he wanted to make sure he and his staff coached the dark team.

“They meant a lot all season,” Ortlieb said. “Over the last four years, they’ve been able to keep it fun not just with the soccer but off the field, the bantering back and forth. So, seeing these guys play one last time in their uniform was special.”

The Gretna Breeze remains committed to serving the Gretna community, but it will no longer maintain an office in Gretna.

The Gretna Junior Legion Dragons won their 22nd game with a 10-7 win over Millard South on Thursday, June 30.

A pair of Gretna standout soccer players, Allison Marshall and Brett Perkins, were named the girls and boys Nebraska Gatorade Players of the Year.

Two Gretna teenagers died Saturday night in a two-vehicle collision on I-29 near Percival, Iowa.

A limpkin, a bird never before seen in Nebraska, was spotted at a wetlands mitigation pond near Gretna. The tropical shorebird’s typical range is in south Florida and central America.

Firework stands are open for the season through Independence Day across Sarpy County.

Word of mouth travels faster than most news stories these days, so many of you may consider what I’m about to share as old news, and maybe it is.

Flanked by 40 members of the Patriot Guard Riders with flagstaffs held high, more than 200 family, friends, neighbors and well-wishers gathere…

Gretna head coach Chace Hutchison (center, wearing green) on the sidelines one last time with Dragons Savannah DeFini (No. 12), Sydney Zabloudil (No. 10) and Chaley French (No. 4) during the Nebraska High School Soccer Senior Showcase on Saturday.