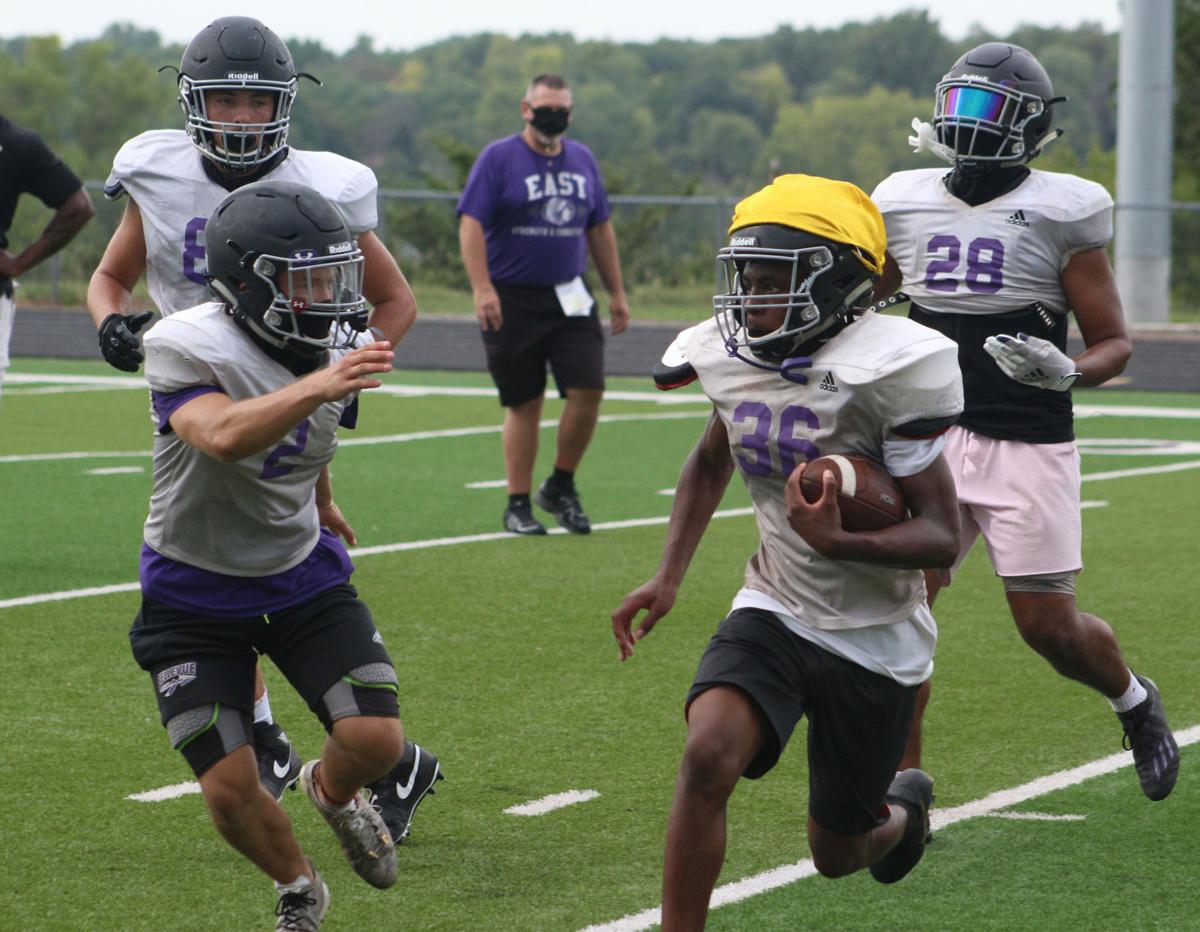 Coach Lies talked highly about the Chieftains run game saying the have a great balance of thunder and lightning in their backfield. 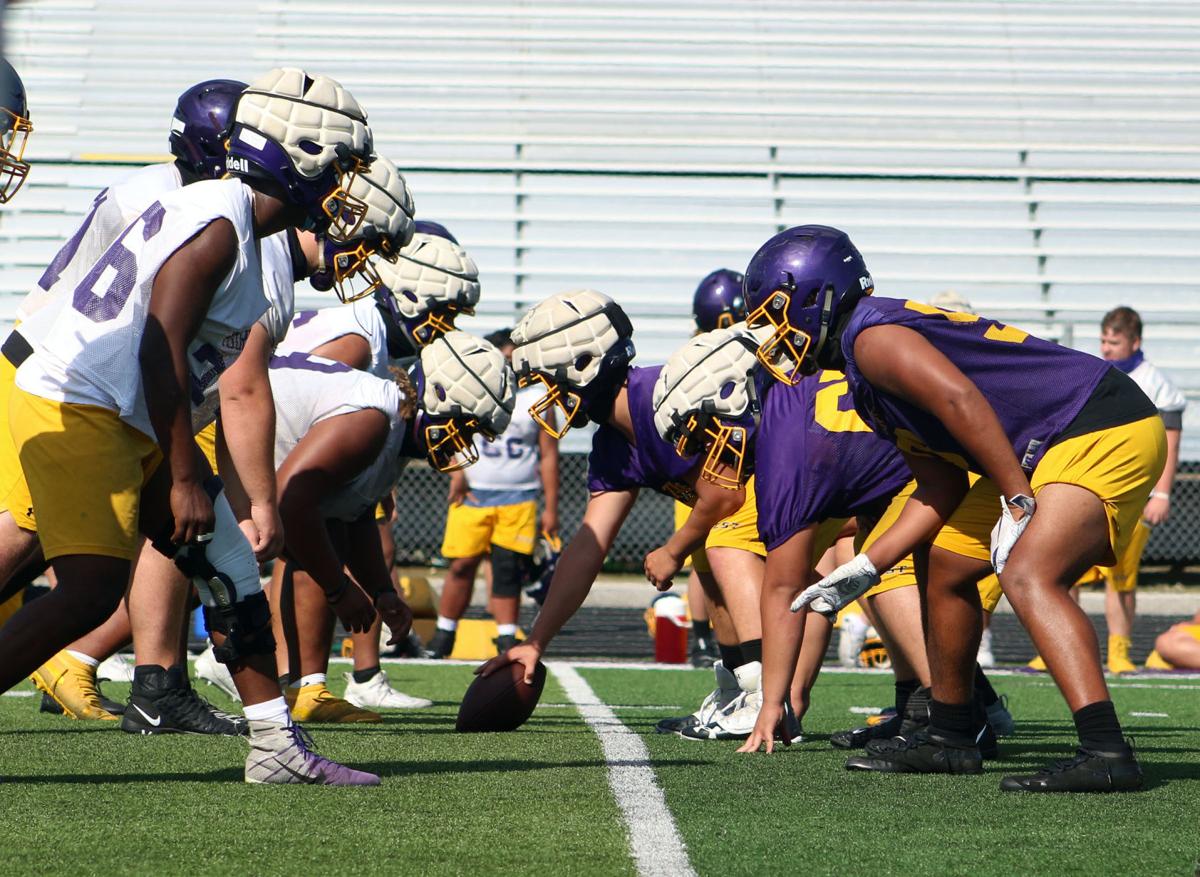 The Thunderbirds look poised to have one of the states top defensive units, while the offense should line up with plenty of firepower again. 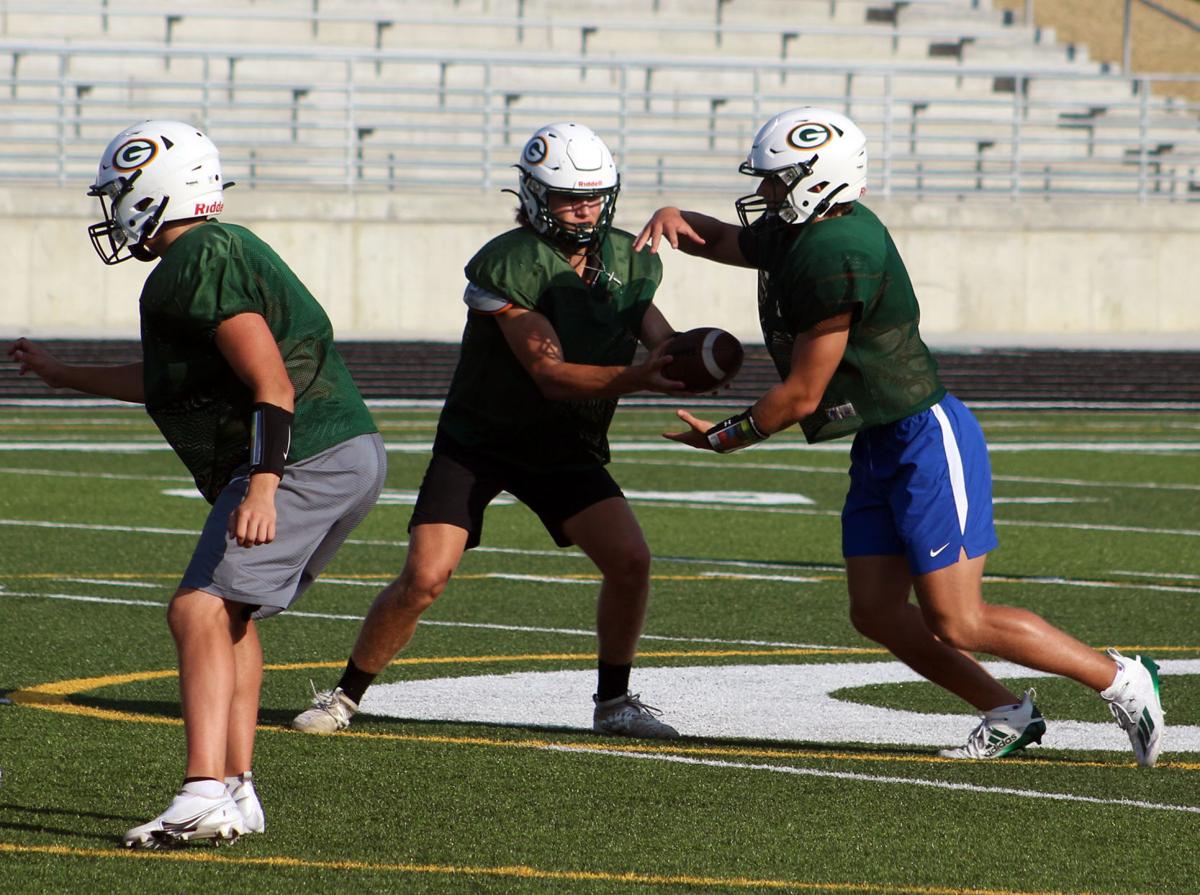 The Dragons return plenty of key players such as running back Trevor Marshall and quarterback Zane Flores. 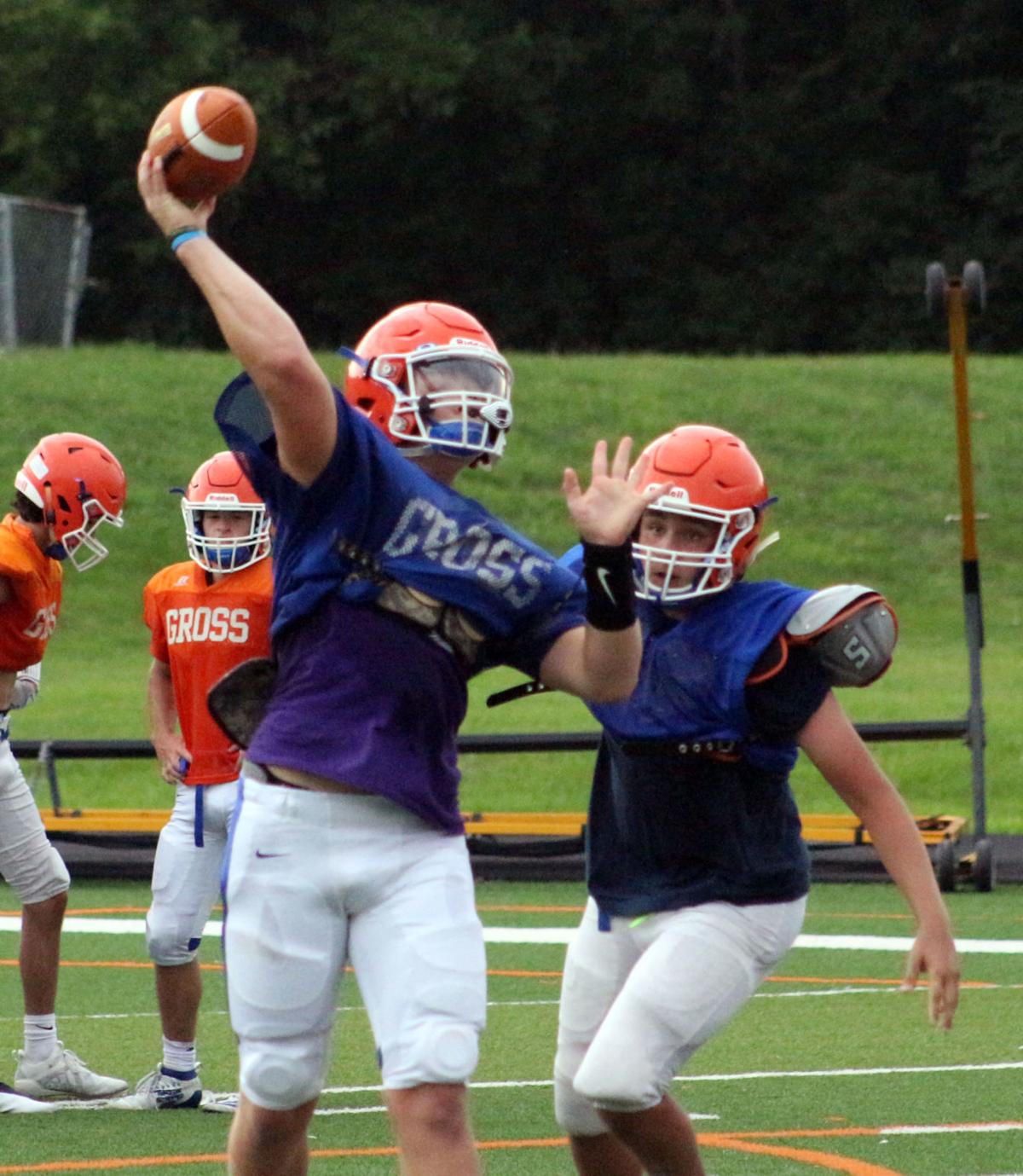 Henry Teunissen has come out firing as he returns to the Cougar's fold for his second year behind center.

Players to watch out for: Quarterback T.K. Barnett returns after starting as a freshman last year and showed some great flashes last season. William Foster and Gavin Zurcher each return varsity experience from the running back position last season and look to give the offense some thunder and lightning in the backfield. Kyrell Jordan was brought up as a nice surprise for Coach Liess at slot receiver. Preston Welch and Gage Higgs also bring back valuable experience to Chieftain’s offensive line.

Coach comments: “We've been playing the same kids for a couple years now and some of those kids who were freshman and sophomores have become our upperclassmen which gives us some reasons to feel optimistic about what we can do. Our players now have a lot of retention which allows us to build off things from the past and we hope that will lead to the “W” column that everyone wants to see.”

Players to watch out for: Keegan Johnson is expected to be a big time playmaker as Huffman says,”Johnson in my opinion is the best player in the state of Nebraska. There may be some guys with better measurables, but when you turn on the lights I don’t think there’s anyone better”. Kier Kier at middle linebacker is expected to have another superb season after recording 85 tackles last season. Jack McDonnell led the Thunderbirds in tackles last season with 94 tackles and returns at outside linebacker this year.

Coaches comments: “We have a really good team coming back,” Huffman said. “We lost some unbelievable pieces from last year such as Jaevyon Ducker who scored more points than anyone else in the history of T-Bird football, Nate Glantz played exceptionally well at QB last year, and had an all-state receiver in Zavier Betts.

Thankfully pretty much all of the defense is back for us. Those who are stepping in I think will be just as productive if not more, so that should give our offense some time. I like our receivers and running backs. The quarterback race is still very open though we may rotate through or three different guys until one of them plays better than the rest. Again though, our defense should be solid. We have all three of our linebackers returning and our front four should be tough to block as well. We’ll have to replace some of our corners, but we got some good guys filling in there that we’re excited about. ”

Players to watch out for: Trevor Marshall ran for over 900 yards last season and caught 19 passes for 182 yards receiving. Quarterback Zane Flores returns after passing for over 1,200 yards as a freshman last season. Jackson Alexander was the team’s leading receiver last year with over 400 yards and was also a key piece for the Dragon’s defense with 44 tackles. Creed Leathers returns the most tackles as he had 50 tackles last year.

Coach comments: “We got some key guys returning at some skill positions,” Kayl said. “We have more returning experience this year than last year on offense and even on the defensive side of the ball we are returning a decent amount of kids.

“We’re excited to have our quarterback Zane (Flores) returning. “Zane has grown mentally and physically from last year and he’s already been doing a great job of leading the rest of the kids out here. Having Trevor (Marshall) back is also huge, he was close to 1,000 yards rushing last season. We also have last year’s leading receiver and our starting tight end back some we got a lot of great pieces to work with this season as everyone has really put in some great work over the offseason.”

Players to watch for: Luke Rice brings veteran experience to the Cougar’s offensive line and at linebacker on defense as he enters his third season as a starter. Chuck Monico is expected to be a bigtime playmaker this season after he returns from an injury.

VanHoute has also been impressed with sophomore quarterback Henry Teunissen as he continues to learn and show off his skill set through the first few practices.

Coach comments: “We have a lot of guys returning to both sides of the ball and we feel like we have a very talented sophomore class,” VanHoute said. “A lot of our returners have already invested in this offseason and their extra efforts have already been showing up here at practice. We’re really excited about this year’s team and how they’ve already bought in, there’s a lot of kids here that can do a lot of good for us, it will be awesome to get out there on Fridays and see what we can do.”

Players to watch out for: Running back Cole Price ran over 1,100 yards last season and will be a key component to the Monarch offense and also played a key role on defense. Seth Obermeyer will take over the quarterback spot for Papio this season.

Tyson Money is anticipated to have a strong season at receiver as Williams says he has continuously stood out at practice and workouts. Luke Guzman returns with valuable experience on the offensive line.

Coaches Comments: “It’s awesome to have the chance to play,” Williams said. “The kids have been working their butts off, and while wearing masks. Whatever they want us to do to keep our season going, we’ll do it.”

“Obermeyer has worked really hard to make this his team. I’ve been very pleased with his progress and he gets better everyday, and to have a near 1,200 yard running back in Cole Price return gives him a nice safety net. It’s good to have a kid like Cole to hand the ball to and let him make some plays, and Cole definitely one of those guys.”

Coach: Coach Tim Clemenger will be in his 6th year at Papio South , two years were spent as an assistant and this year will be his 4th as head coach.

Players to watch out for: (WR) - Jackson Horn, a returning starter for the Titans garnered an All-Metro Honorable Mention and was 7th in the Metro with 418 receiving yards with an average of 15.5 Yards Per Catch with five touchdowns. Look out for RB Jaden Quelette to help contribute on the offense with his explosiveness.

On the defensive side of things (LB) Zach Circle is a returning starter that got an All-Metro Honorable Mention and was third in Metro LBs with 13 Tackles for a loss.

Mark McLaughlin is in his second year as Platteview High School’s head coach and will have to rely on developing young talent on his team as PHS graduated all 11 of its starters on defense and eight of their offensive starters.

Players to watch out for: The Trojans return their leading receiver, Alex Draper. Draper is a sophomore and McLaughlin expects him to be a big contributor to the offense.

Cody Metzger and Kayden Wallis-Collier return as starters on the offensive line. McLaughlin thinks both of them will be all-district caliber players.

Several sophomores and juniors will be starting.

PHS will look to the opportunity to maximize its chance to get younger kids valuable game experience and wants to top local expectations of a "rebuild".

Coaches Comments: “We will undoubtedly be the youngest team in our district, McLaughlin said. “We will probably be the younger team in every game we play this season, the scary thing is that we lack game experience.

Coach: Jason Fink will look to utilize 16 returning stars as they embark on the upcoming season.

Other players to watch out for include: WR/DE Caleb O’Brien, OL/DL Ayden Fink and OL/DL David Hernandez.

The Rams are rightfully optimistic this season as they will look to improve on their 1-8 from last season as they return lots of returning experience on both sides of the ball this season. Madden will run behind a line that returns four starters. The receiving corp returns, but will need to find someone to get them the ball. The defense will have a solid front eight with some good battles for the secondary spots.

Check out the Metro Conference Softball Tournament scores from Sept. 12:

Check out the Metro Conference Softball Tournament scores from Sept. 12:

Coach Lies talked highly about the Chieftains run game saying the have a great balance of thunder and lightning in their backfield.

The Thunderbirds look poised to have one of the states top defensive units, while the offense should line up with plenty of firepower again.

The Dragons return plenty of key players such as running back Trevor Marshall and quarterback Zane Flores.

Henry Teunissen has come out firing as he returns to the Cougar's fold for his second year behind center.