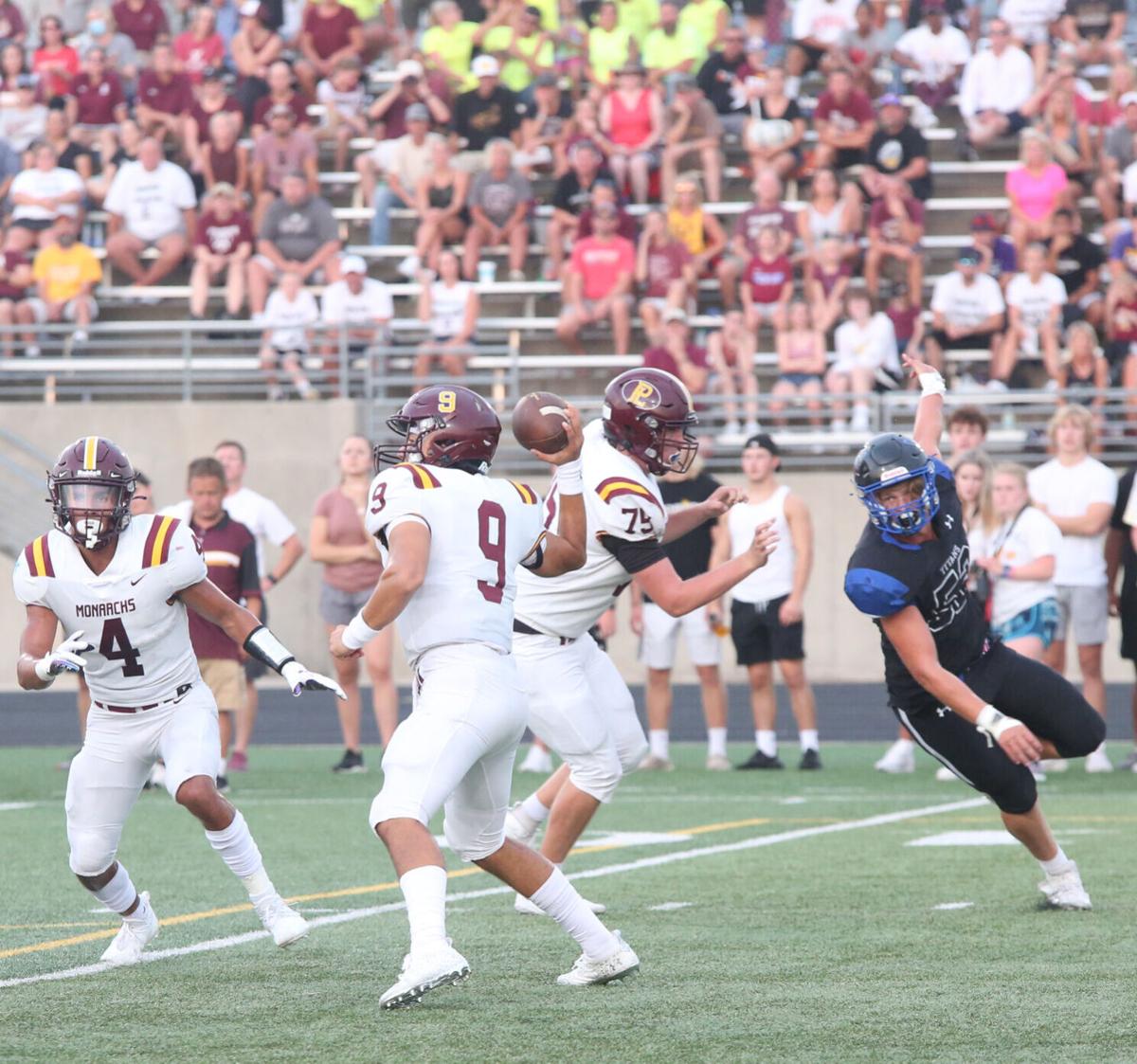 Senior QB Nick Chanez slings the rock against a stingy Papio South defense. Although PLV was down at halftime 20-0, the monarchs rallied with 28 points to edge out the Titans 28-26. 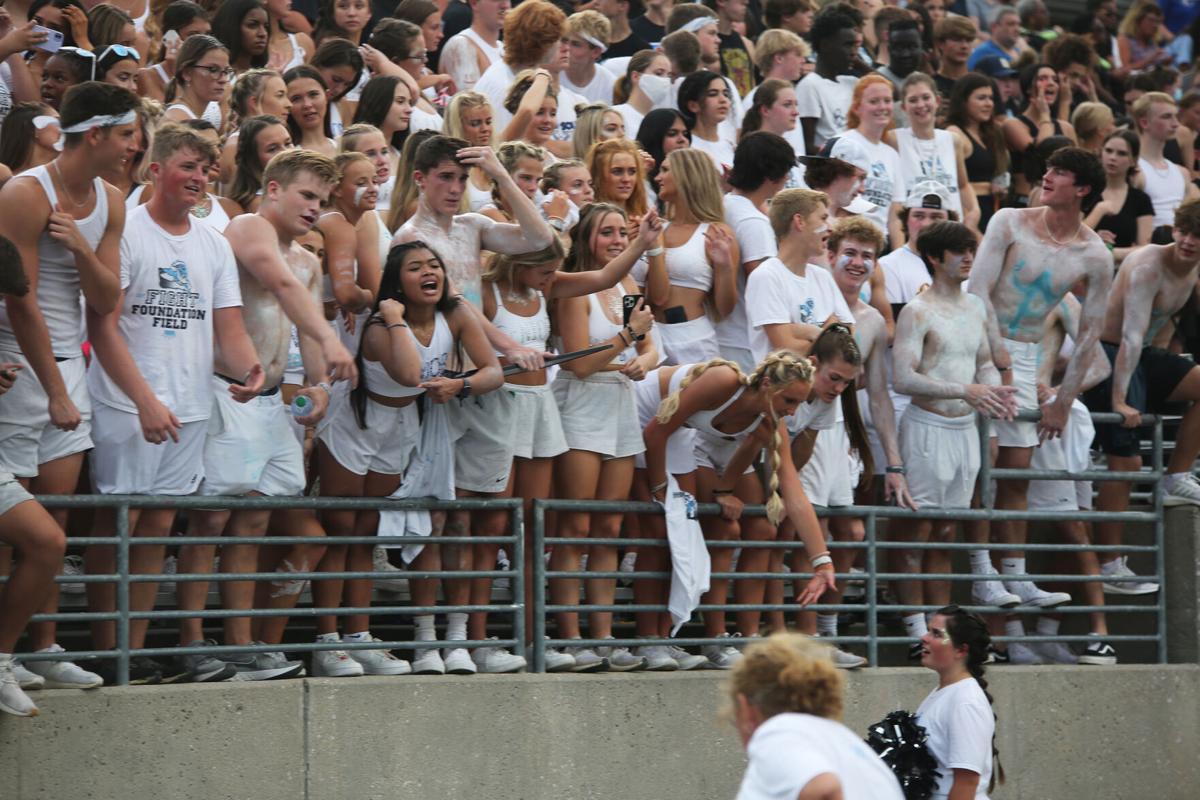 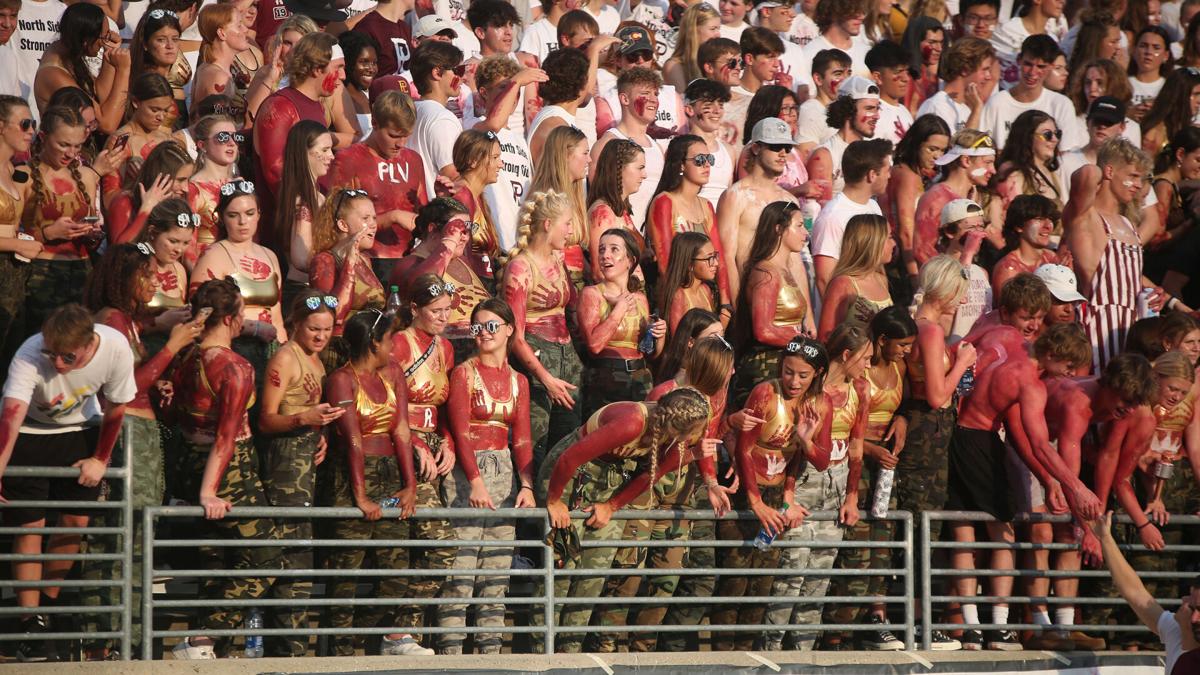 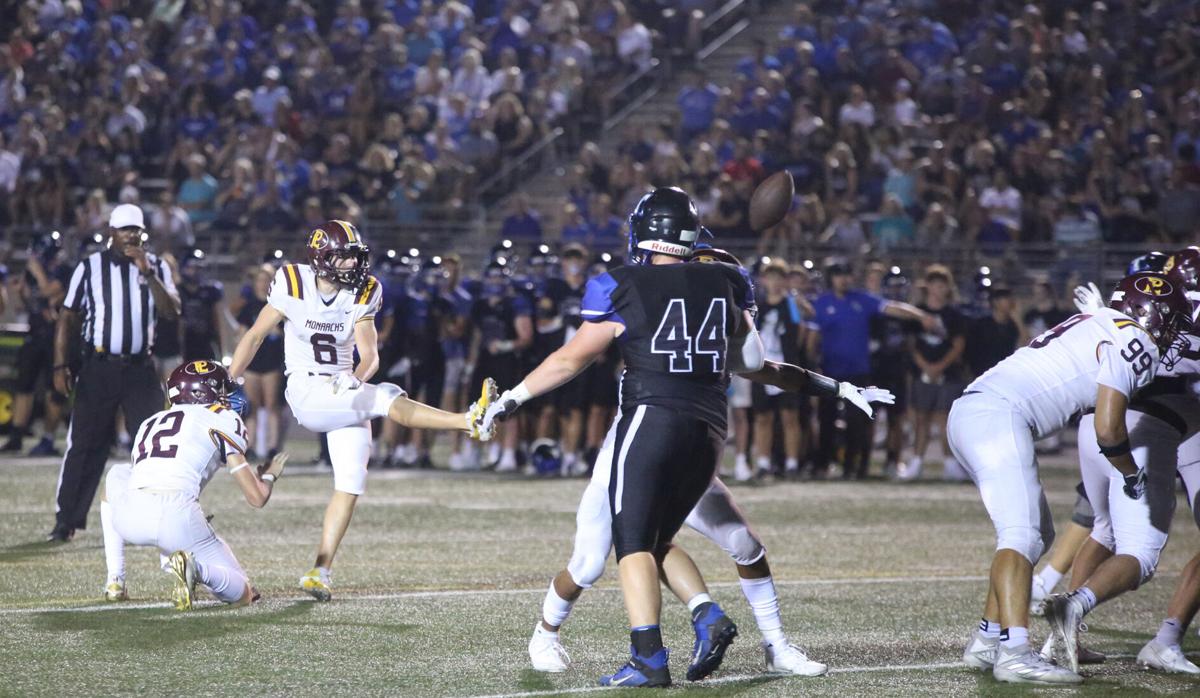 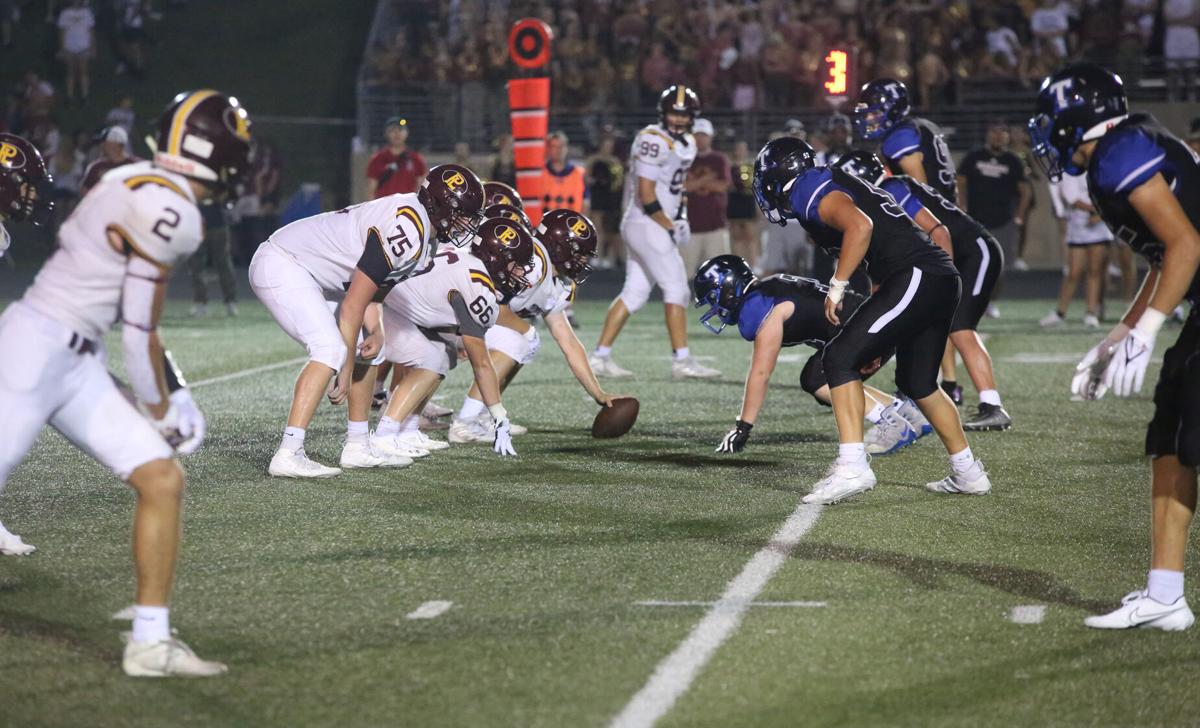 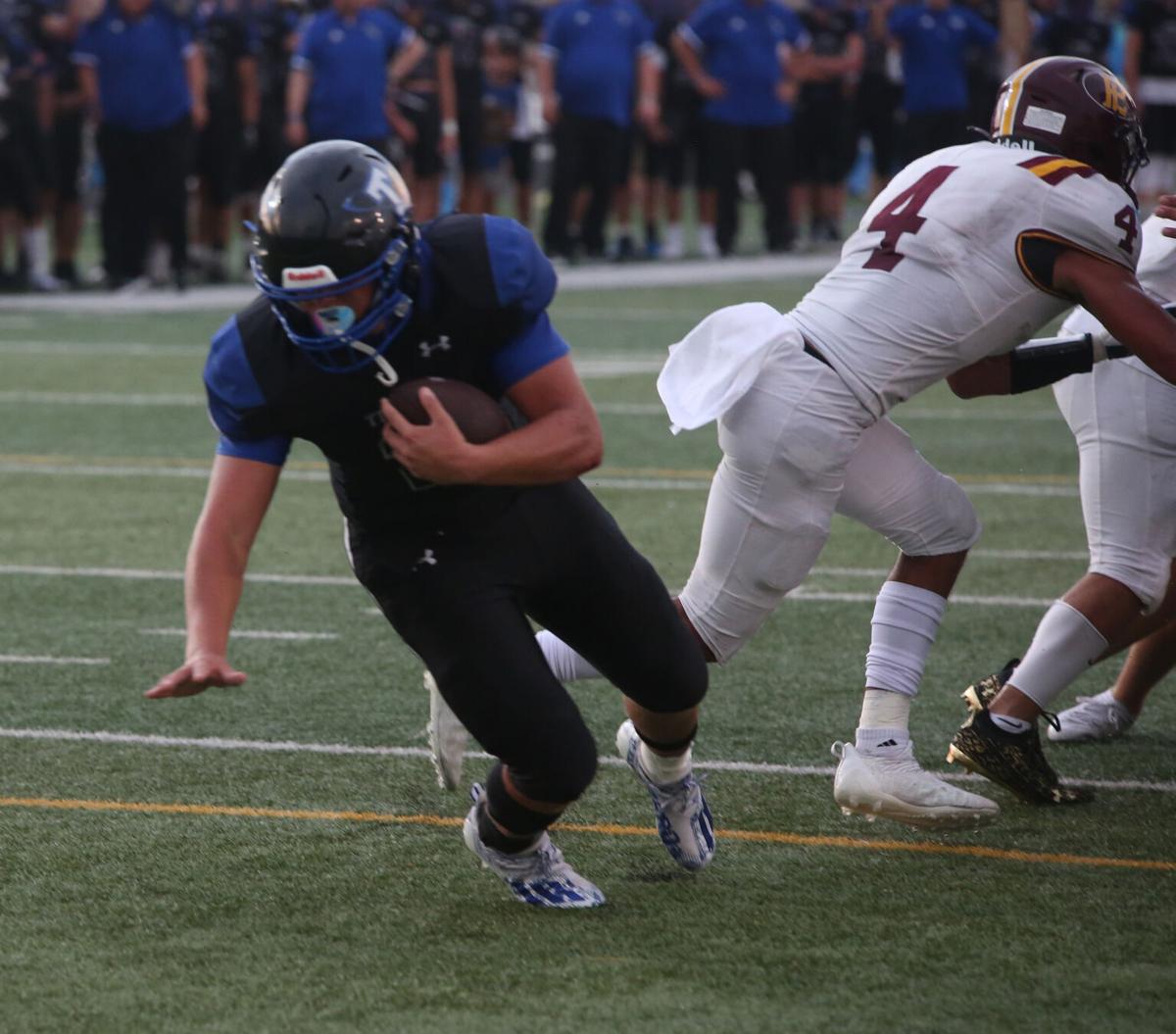 Papio South Junior running back Devyn Jones powers his way into the end zone for a Titan touchdown on Aug. 27. Despite the Titans being up 20- at halftime the end results favored Papillion La Vista High School 28-26.

The Titans, led by starting quarterback Brady Fitzpatrick, dominated the first half over the Monarchs and were first on the board with a 6-0 lead after one quarter. The Titans’ offense punched it in two more times before halftime and held a somewhat surprising 20-0 lead at half.

But the tides would change when both teams returned from the locker room. Papillion-La Vista put together an absolutely phenomenal third quarter behind their stout defense, scoring 21 unanswered points to make it 21-20 in favor of the Monarchs entering the fourth quarter.

Papillion-La Vista did just enough in the fourth quarter, scoring one more touchdown and holding on for a nail-biting 28-26 comeback victory.

“I told the kids at halftime that you can’t look at the scoreboard,” said Monarchs’ head coach Tim Williams. “I just challenged them in the second half to play our game, one play at a time, and the kids answered and I couldn’t be more proud of them.”

Of course the Monarch offense played well, but their second half domination was fueled by their outstanding defense. Papillion-La Vista has last year’s state leader in sacks and tackles for loss in Will Hubert. Hubert finished Friday’s rivalry contest with 11 tackles, three and a half tackles for loss and one and a half sacks. Papillion-La Vista South’s Fitzpatrick finished with 130 yards through the air and two touchdowns.

The Titans fall to 0-1 to start the year while coach Williams and the Monarchs improve to 1-0. Both teams will be playing again this upcoming week with Papillion-La Vista traveling to Creighton Prep on Thursday, Sept. 2, and Papio South hosting Lincoln East on Friday, Sept. 3.

Those driving near the intersection of Highways 6/31 and 370 may have seen a new sign pop up in recent months. Iron Heaven Gym is now open in …

City staff are working closely with newly-annexed residents, as demonstrated by a new city ordinance -- spurred by a letter from a property ow…

Greenery & Glitter, Gretna’s annual holiday celebration, will return on Sunday, Dec. 5. The event is traditionally held on the first Sunda…

PAPILLION — The Sarpy County Board of Commissioners on Tuesday, Nov. 23 changed the district’s county board voting boundaries to reflect the 1…

Supporters of PLCS rise-up at meeting

It was a heartwarming sight along Main Street in Springfield on Monday night.

Light Up Bellevue announced on Nov. 24 that the 2021 Christmas in Olde Towne Holiday Lights and Music Show will run through Jan. 8, 2022.

A local woman’s attempt to spread Christmas cheer is not going unnoticed.

Zach Kozak, a senior at Gretna High School, was named a semifinalist in the 2022 National Merit Scholarship Program this fall.

Nebraska needs teachers and Bellevue University is doing its part to help provide them.

Senior QB Nick Chanez slings the rock against a stingy Papio South defense. Although PLV was down at halftime 20-0, the monarchs rallied with 28 points to edge out the Titans 28-26.

Papio South Junior running back Devyn Jones powers his way into the end zone for a Titan touchdown on Aug. 27. Despite the Titans being up 20- at halftime the end results favored Papillion La Vista High School 28-26.