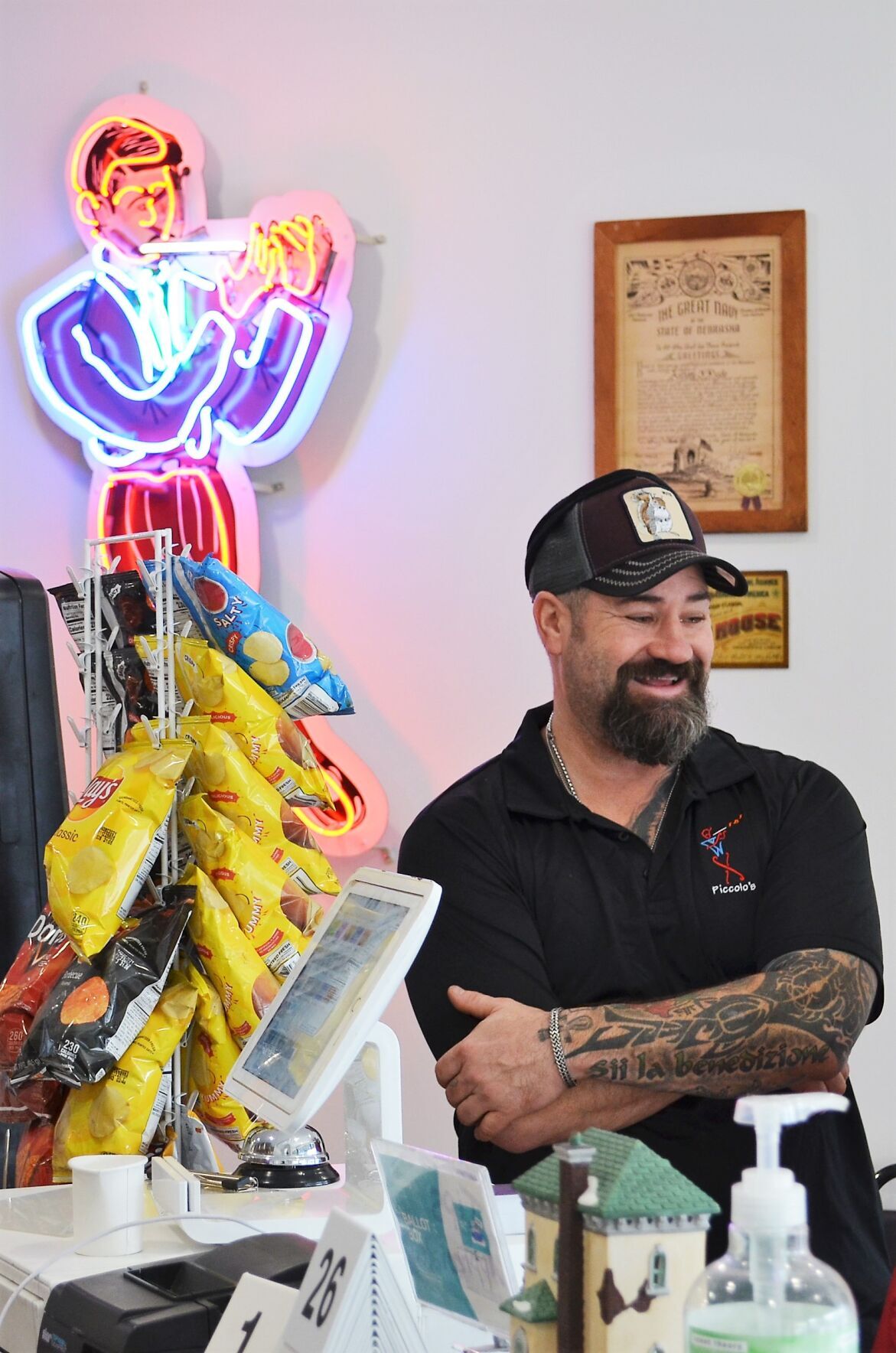 Scott Sheehan, owner of Piccolo Pete’s in downtown Papillion, stands in his restaurant near a smaller reproduction of the iconic neon sign that hung about the former South Omaha steakhouse. 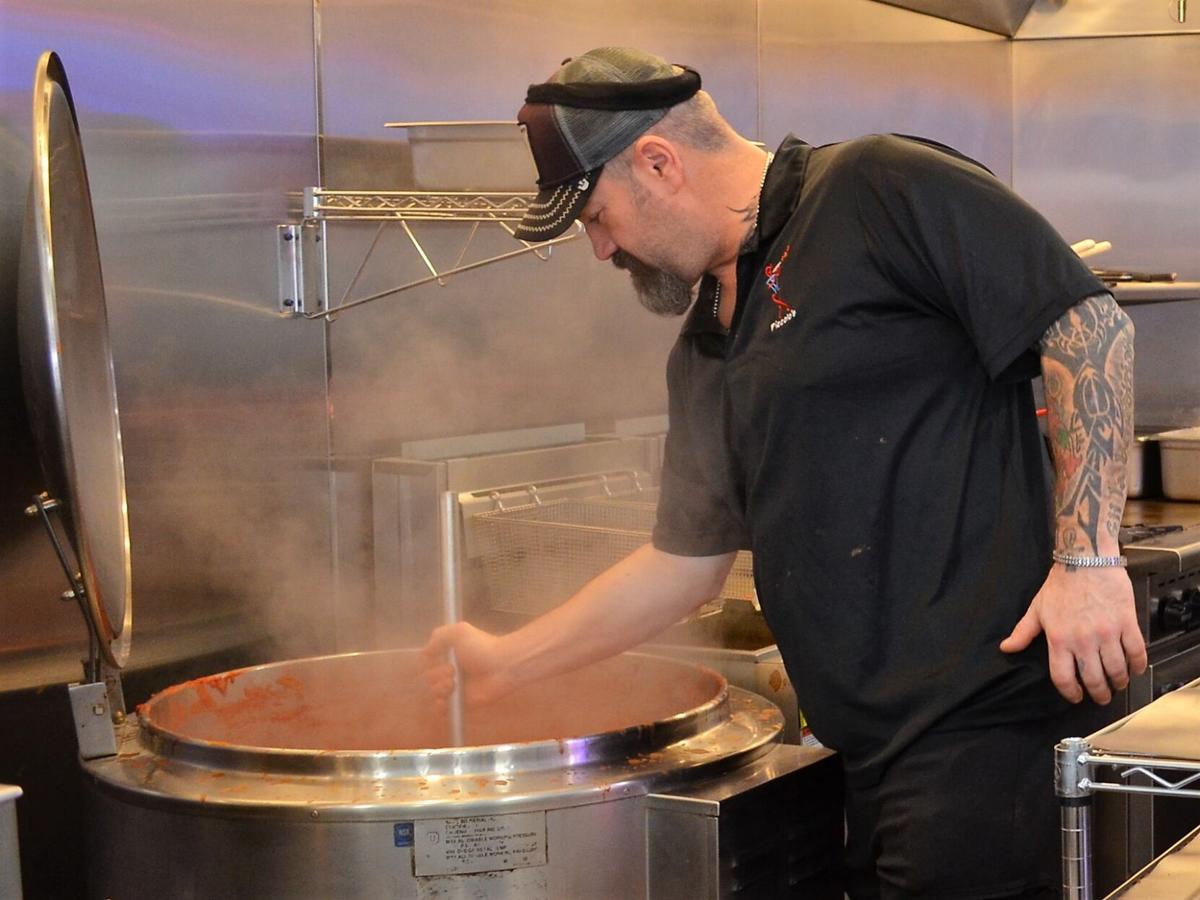 Sheehan puts in the work of near constant stirring of a 25-gallon vat of Piccolo's sauce, made from the original recipe. 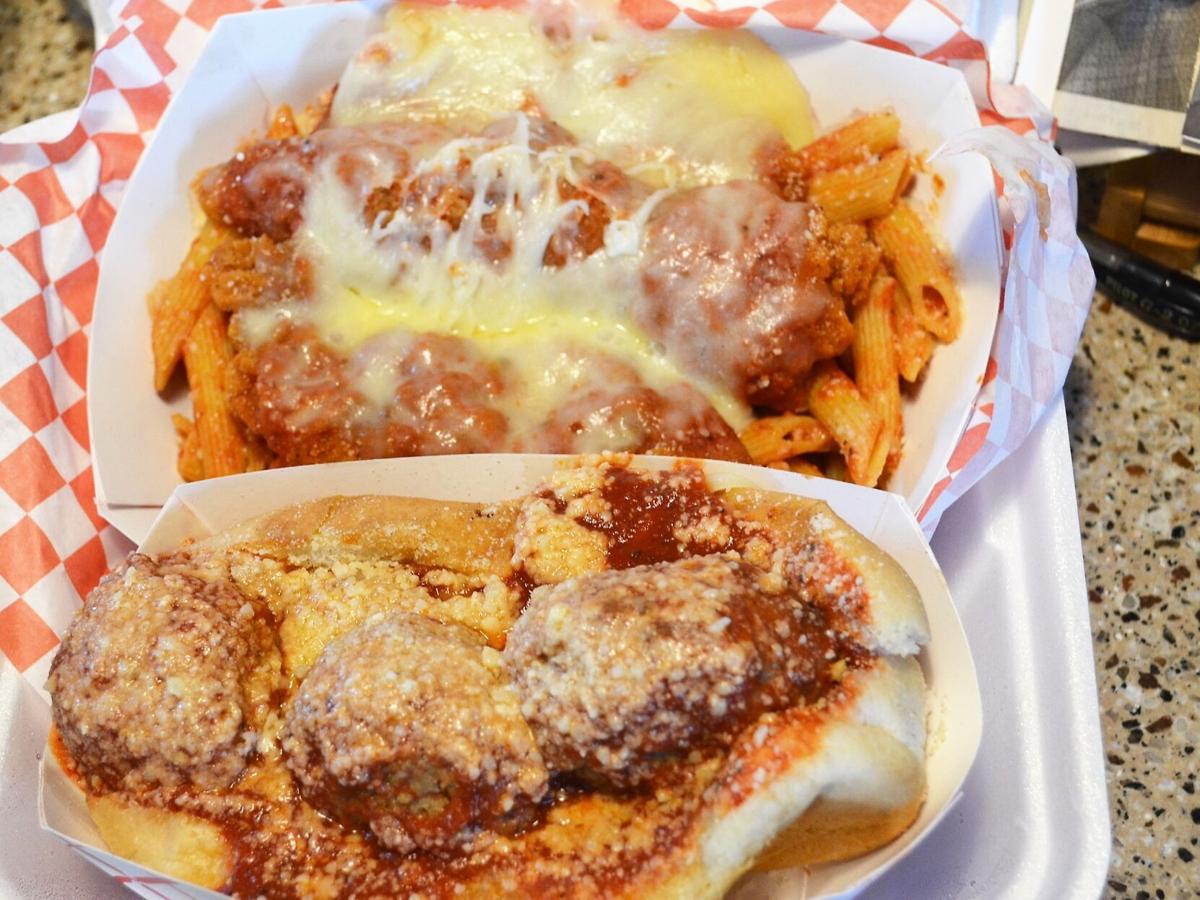 The article's author can attest that Piccolo Pete's famed chicken parmesan on pasta, above, and meatball sandwich are yummy hot from the stove, as well as cold for breakfast.

On the day before the grand opening of Piccolo Pete’s in Papillion, owner Scott Sheehan stands near a newly-installed 25-gallon electric steam kettle filled to the rim with his family’s renowned red sauce.

When I say newly-installed, I mean just the night before. His first kettle had died and sat out back. By sheer providence, a similar kettle was recently uninstalled from a building on Omaha’s South 20th Street. It used to be the home of a legendary institution — Piccolo Pete’s.

Here was a 47-year-old man remarkably composed for all the weight on his shoulders. Any normal restauranteur might be a little frantic the day before the doors open.

Add to that a broken kettle. Add to that limited supplies of disposable serving cups and lids due to nationwide shortages. Add to that the bone-chilling cold outside. And, lest ye forget, opening while a pandemic still rages and in a time when restaurants are failing left and right.

“I am excited and I am honored,” he said without irony. “My grandfather instilled in me the value of hard work.”

His grandfather was Anthony Piccolo Sr., who founded Piccolo Pete’s in Omaha in 1934. His uncle, aunt and mother all ran the store. He is the heir of the dynasty.

This was more than a restaurant opening. This is destiny being fulfilled.

I write this piece as a commentary, rather than a straight news story, because this was never going to be a normal story. That became clear last fall at a convenience store in Lincoln. While standing at the counter wearing a Papillion Times T-shirt, an old-timer patted me on the shoulder. He had two things to ask me.

1. “I didn’t know the Papillion Times was still in business?” Not the best start, but okay.

2. “I hear Piccolo Pete’s is opening back-up. How soon will that be?”

This was followed by a short, but lovely anecdote about him and his wife and their favorite restaurant. He was quite eager to dine again.

News broke in mid-September that Piccolo’s, one of Omaha’s longest running and beloved Italian steakhouses, was making a return to a restaurant setting in Papillion. Sheehan even teased it in a Facebook post in August, showing a phoenix rising from the flames.

Even in a fractured media landscape, the announcement created a brushfire online in blogs and social media platforms. It even made the international website wetheitalians.com. The mention of Piccolo Pete’s elicits waves of nostalgia in comment sections. First communions, anniversaries and birthdays were celebrated there, as well as hosts of other establishments.

In spite of all the affection, starting in the mid-2000s, there was a decade-long elimination of Italian culinary landmarks: Angie’s, Mr. C’s, Caniglia’s, Venice Inn and finally, Piccolo’s.

The patrons just were not there anymore. At the time, people blamed the casinos, the growth of Omaha to the west, chain restaurants, a shift to more casual dining, the dwindling middle-class. In retrospect, there is something to be said about simple, plain indifference. Left unnurtured, even the most cherished institutions fade away.

Sheehan is a big “South O Forever” guy who probably did not enjoy getting misty-eyed talking about his family. Seeing Piccolo’s closing was gut-wrenching. However, after 35-plus years in the business under the grandfather’s tutelage, he was not going down without a fight. Sheehan’s hands aren’t just muscled chunks because of chopping and stirring and cleaning. By any measure, he has clawed and pulled his family’s legacy forward day by day.

Even before the farewell dinners on New Year’s Eve 2015, the Anthony Piccolo’s Mobile Venue food truck had been chugging along, serving a handful of staples. The truck was Sheehan’s creation, an attempt to keep the heart beating. It was hoped the food truck would be the way reinvigorate the restaurant.

That is still the plan.

“The passion and the love is there,” he said. “This is why I was put on this earth.”

Leasing the space from Dan Rannells, who owns the building near First and North Washington Streets and Twisted Vine Wine & Tap next door, is a huge step forward. A storefront home in Papillion, a mere 11 miles from the home base. Sheehan’s food truck served customers on the Twisted Vine’s back patio, so this seemed like a good symbiotic relationship.

“Year after year, it gets a little bigger and a little more,” he said.

In the best of all dreams, Sheehan would have a full-service restaurant like before. Maybe the return of the mirror ball, and all the steaks and prime rib. Maybe even in the old building his great-grandfather, Joseph, purchased and turned into a grocery store during the Great Depression.

What Piccolo’s was and what Piccolo’s may one day become wasn’t at the forefront of Sheehan’s mind that Wednesday afternoon, but the slow, methodical by-the-numbers grueling work of prepping and cleaning.

To be clear, this is not a full-service restaurant. It is 1,000 square feet of shiny white-walls, shiny stainless-steel counters and shiny floors. There are a few chairs to sit on while you wait for an order. The walls are dotted with some memorabilia, framed family photos and a new neon Piccolo Pete.

The key is slow and steady. Take out until the pandemic subsides, and then a few tables will be brought in. However, diners are encouraged to take their food next door to the Twisted Vine for a glass of something on tap to match their meal.

The menu is a small and steady affair. They are starting with the classics like the ribeye steak sandwich, chicken parmesan on bun or pasta, mostaccioli and meatballs, Italian beef, some salads and sides.

As they are already being bombarded online, yes — the soups are coming. The mushroom soup and the beef barley are coming. And the prime rib will come back as a special, as well as other cherished items.

Bit by bit. It will take patience, Sheehan said. Got to get into the flow.

His mother and former owner, Donna, made it clear in a Facebook post the family has faith, too.

“May all the souls from our restaurant family be with you and around you tonight. You’ve got this. It’s in your blood, and if you need a laugh to help you, just think back to your lemon days. Love you, make room for Grandpa in the kitchen.” — Donna Piccolo Sheehan

PAPILLION – On Thursday, Jan. 13, Papillion La Vista Community Schools returned to a mask mandatory policy for all schools and facilities in t…

The script could not get go any better for Papillion La Vista South wrestling on Jan. 11 against Bellevue East.

PAPILLION — A 42-year-old Papillion man who brought a concealed weapon into the Monday, Nov. 8 meeting of the Papillion La Vista Community Sch…

Kelly to lead Sarpy County Board in 2022

Scott Sheehan, owner of Piccolo Pete’s in downtown Papillion, stands in his restaurant near a smaller reproduction of the iconic neon sign that hung about the former South Omaha steakhouse.

Sheehan puts in the work of near constant stirring of a 25-gallon vat of Piccolo's sauce, made from the original recipe.

The article's author can attest that Piccolo Pete's famed chicken parmesan on pasta, above, and meatball sandwich are yummy hot from the stove, as well as cold for breakfast.