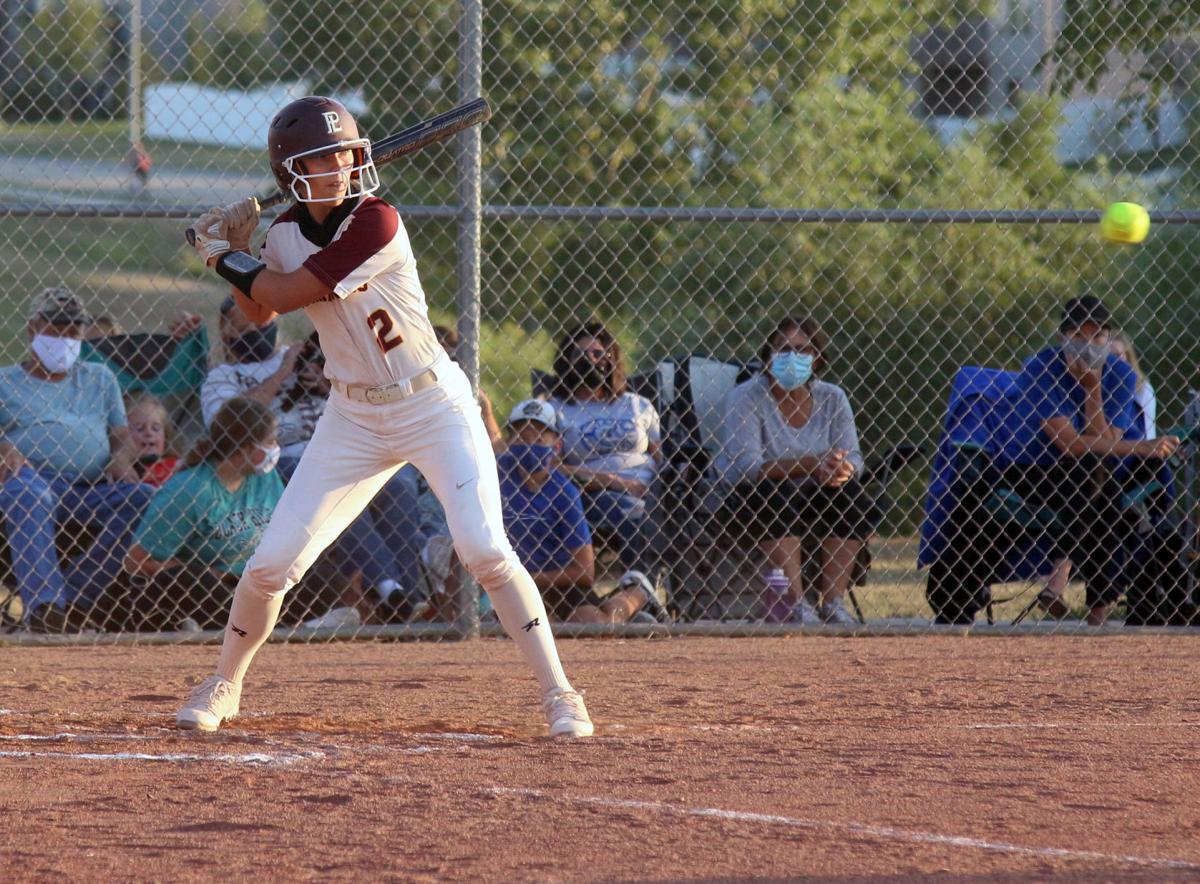 Mia Jarecki has been one of the Monarch’s most dangerous batters as she is second on the team with 38 hits, a .487 batting average and 10 home runs. 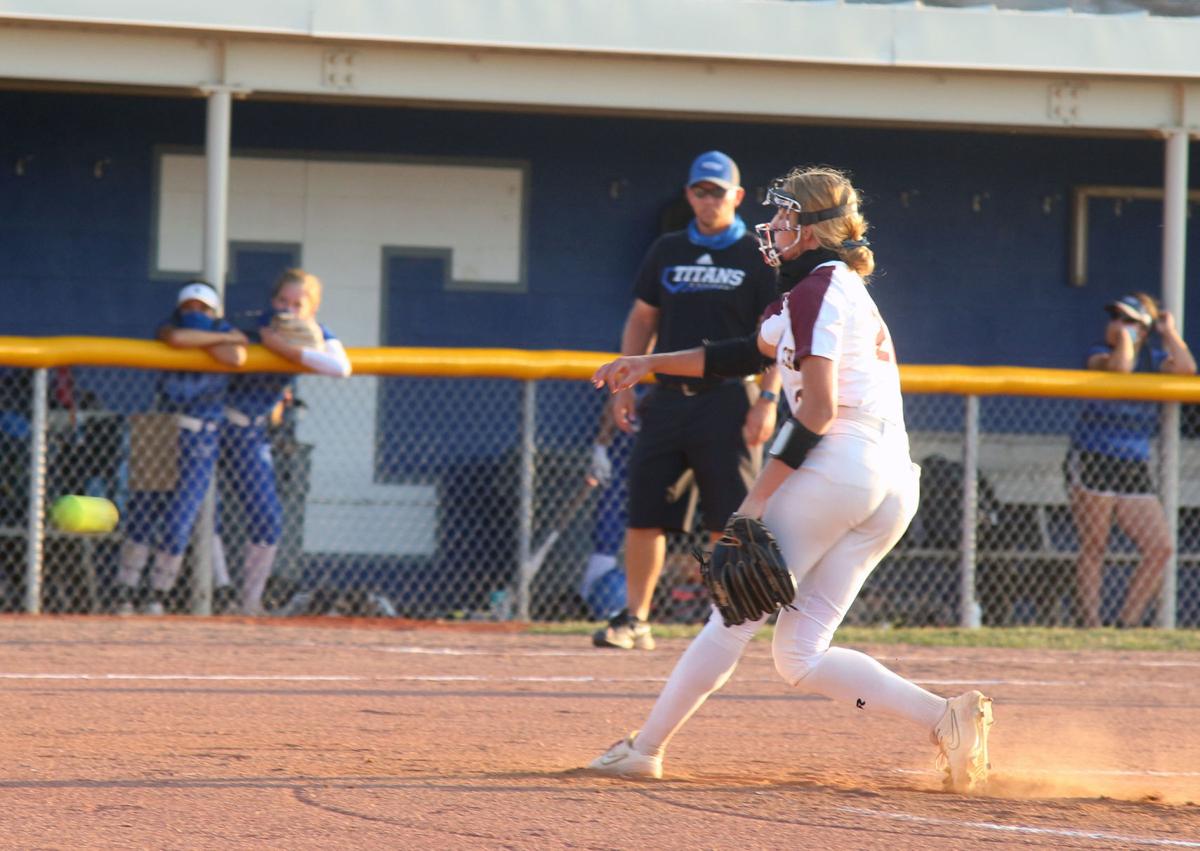 Above, Papillion La Vista senior Jordyn Bahl has been nothing short of impressive on the mound as she holds and ERA of .12 and a record of 24-0 on the season.

It had already been a historical run for Papillion La Vista High School seniors before their final softball season even began. That hasn’t stopped them from finding other ways to leave their mark on the storied Monarch program.

After finishing 36-0 last season with a state title, and being widely seen as the No. 1 ranked team in the country, some may have wondered what the Monarchs could do this year to top last year’s run.

With the regular season concluded, the Monarchs went 29-0 and are currently on a 65-game win streak which bests the previous NSAA record of 49 consecutive wins, which was set by the Monarchs as well.

“Everyone is fueled by each other’s success here,” head coach Todd Petersen said. “We also make it a point to say ‘The girl next to you is there for you.’ When you play with quality players, it’s easy to think that way when things get tight. Someone else can step up and make the play as well. It’s also easier when you have a ton of experience, they’ve been in so many spots, that there isn’t a whole lot that they haven’t already seen.”

Individual records have also been broken throughout the season. Senior Jordyn Bahl — who has committed to play at Oklahoma — has broken a few records, including career RBIs, pitching records, the school’s career win record and consecutive win record.

“It’s been really cool because this team has grown and developed together throughout these four years,” Bahl said. “It’s rewarding to see us get this kind of success individually, along with having great team success. This is a really special class and going back to freshman year, obviously none of us knew what to expect or what this would become.”

Bahl is not the only one getting her name into the record books. Senior Mia Jarecki owns the record for career runs in a Monarch career.

“We don’t focus on the records as much as we do playing our best as a team,” Jarecki said. “When we do play our best, obviously, we break records. ... This is a very special team that can do special things, and we can rely on everyone in the batting order and on the field.”

As the season winds down, the seniors look to place their final mark on this historic run.

“We definitely want to keep that win streak going,” Jarecki said. “Obviously, we also want to win state, but what comes with that is continuing to become a better team all around and play for each other. If we do that the rest will take care of itself.”

Petersen said the team works as a unit to avoid complacency and to keep the rhythm going.

“We talk about chasing some of these records and things like that,” Petersen said. “We then use those like measuring sticks for terms of offensive and defensive categories, and it keeps them focused and hungry.”

The Monarchs will be looking to collect their 16th overall state championship this postseason.

Jurassic Safari, a drive-thru dinosaur exhibit will be in residence at the Sarpy County Fairgrounds for two weekends in October

“Objects in mirror are closer than they appear,” at least that’s the case for six days in October when the Sarpy County Fairgrounds are the ho…

Buying local: The Book Nook is welcomed to Papillion

Downtown Papillion has a new, locally owned bookshop. The Book Nook opened about two weeks ago on Washington Street and business owner, DaRonn…

Heights Draft Room is a family-owned bar that specializes in craft beer. It opened in July and is the first commercial venture to open in La V…

The City of Papillion announced that Tracy Stratman will be appointed by Mayor David Black as the next recreation director. Current recreation…

The Papillion La Vista Community Schools Board of Education at its Oct. 12 meeting:

Mia Jarecki has been one of the Monarch’s most dangerous batters as she is second on the team with 38 hits, a .487 batting average and 10 home runs.

Above, Papillion La Vista senior Jordyn Bahl has been nothing short of impressive on the mound as she holds and ERA of .12 and a record of 24-0 on the season.