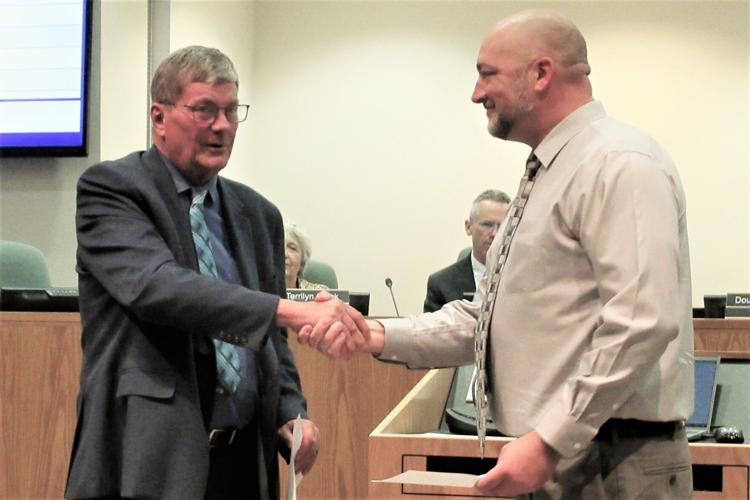 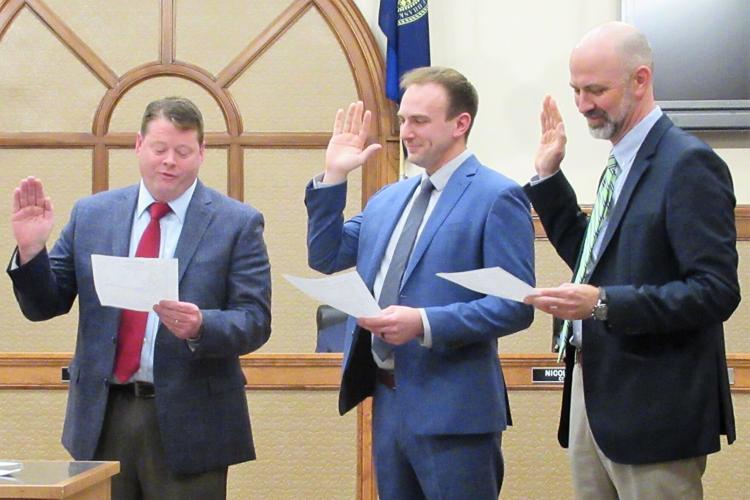 From left, Travis Gibbons, Alex Evans and Mark Stursma take the oath of office for their new positions at Tuesday's (May 3) Papillion City Council meeting.

A member of the planning commission since 2019, Frey will serve out the term of Terrilyn Quick in Ward II until this January. Due to redistricting, Quick was appointed to the Ward I council seat until 2024. The seat was vacant due to the resignation of Michael Crawford.

Frey has been the City of Omaha’s Parks Maintenance Manager for nearly a decade. He will resign his seat on La Vista’s Planning Commission to take the City Council position.

“Josh has been a valuable member of our Planning Commission,” Mayor Douglas Kindig said in a statement. “He is aware of our major projects and he has experience in his professional life of dealing with budgets, so that will be useful as we work to approve our next biennial budget this coming summer. I thank Josh for stepping up to fill this role for the City.”

Frey said he has been interested in the projects going on in La Vista since he and his family moved to the community in 2014.

“I’ve enjoyed my time on the Planning Commission quite a bit. I enjoy being a part of things and doing what I can to give back and help in my community,” says Frey.

Over at the Papillion City Council, Mayor David Black gave the oath of office to three promoted staff members.

Black has appointed Mark Stursma as deputy administrator of Community Development. He will oversee the planning and building departments, and is responsible for ensuring the quality and compatibility of new development and redevelopment in Papillion’s jurisdiction.

“This position is vital to effectively and responsibly managing Papillion’s continued growth,” Black said in a press release. “Mark’s talent and skillset has been instrumental in guiding our community’s development up to this point. His new role will continue to ensure the City of Papillion’s future development is on the right track.”

Stursma has worked for the City of Papillion for 18 years. Overall, he has a 28-year career in the field of planning and development, experience in working in both the public and private sectors.

“Travis brings solid knowledge and experience to his new role as Planning Director,” Black said. “I have full confidence that he will continue to maintain the department’s high standards, which ultimately leads to a high quality of life for our residents.”

Alex Evans has been promoted to deputy Public Works director/city engineer, responsible for the daily operation of the Papillion Public Works Engineering Division and the planning and implementation of public infrastructure expansion and the engineering oversight of its repair and replacement.

Evans has worked in the engineering career field since 2008. He has served as the deputy city engineer for the City of Papillion for three years and was previously a civil engineer in Burns & McDonnell’s Water Group.

“Alex is well equipped for his new role and will continue Papillion’s reputation for high-quality, well-maintained city infrastructure,” Black said.

Sauced by Alfaro takes over Piccolo Pete's space in Papillion

LA VISTA — Promising something new, the City of La Vista announced this year’s Salute to Summer will be “a one-day extravaganza” featuring a p…

A dream meeting for a Husker Fan

PAPILLION — SuAnn Witt, a one-term Papillion La Vista Community Schools Board of Education member, has announced she is seeking reelection.

New officers and many honors at board, council meetings

PAPILLION/LA VISTA — The city councils of La Vista and Papillion convened on Tuesday, May 3 for their scheduled bi-weekly meetings.

Holtmeyer running for PLCS Board

PAPILLION — Brittany Holtmeyer has announced her candidacy for the Papillion La Vista Community Schools Board of Education.

PAPILLION — Elizabeth Butler, the current city clerk of the City of Omaha, has announced her candidacy for the Papillion La Vista Community Sc…

From left, Travis Gibbons, Alex Evans and Mark Stursma take the oath of office for their new positions at Tuesday's (May 3) Papillion City Council meeting.