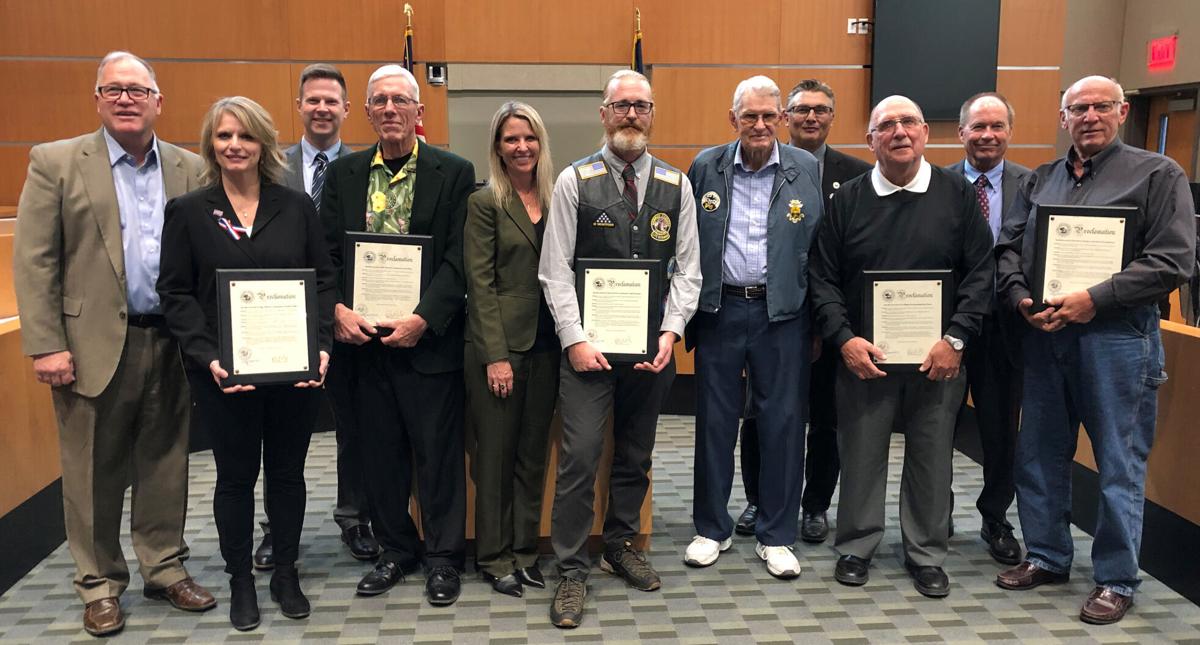 Each member of the Sarpy County Board of Commissioners honored a veteran from their district for service in the United States military in a Veteran’s Day celebration on Tuesday, Nov. 9. From left to right: Commissioner Don Kelly (District 1) and Peggy Ullom; Commissioner David Klug (District 2) and Mike Neuzil; Commissioner Angi Burmeister (District 3) and Johnny Farnen; Ellis McClintick and Commissioner Gary Mixan (District 4); and Tim Gilligan, Commissioner Jim Warren (District 5), and Russ Zeeb. 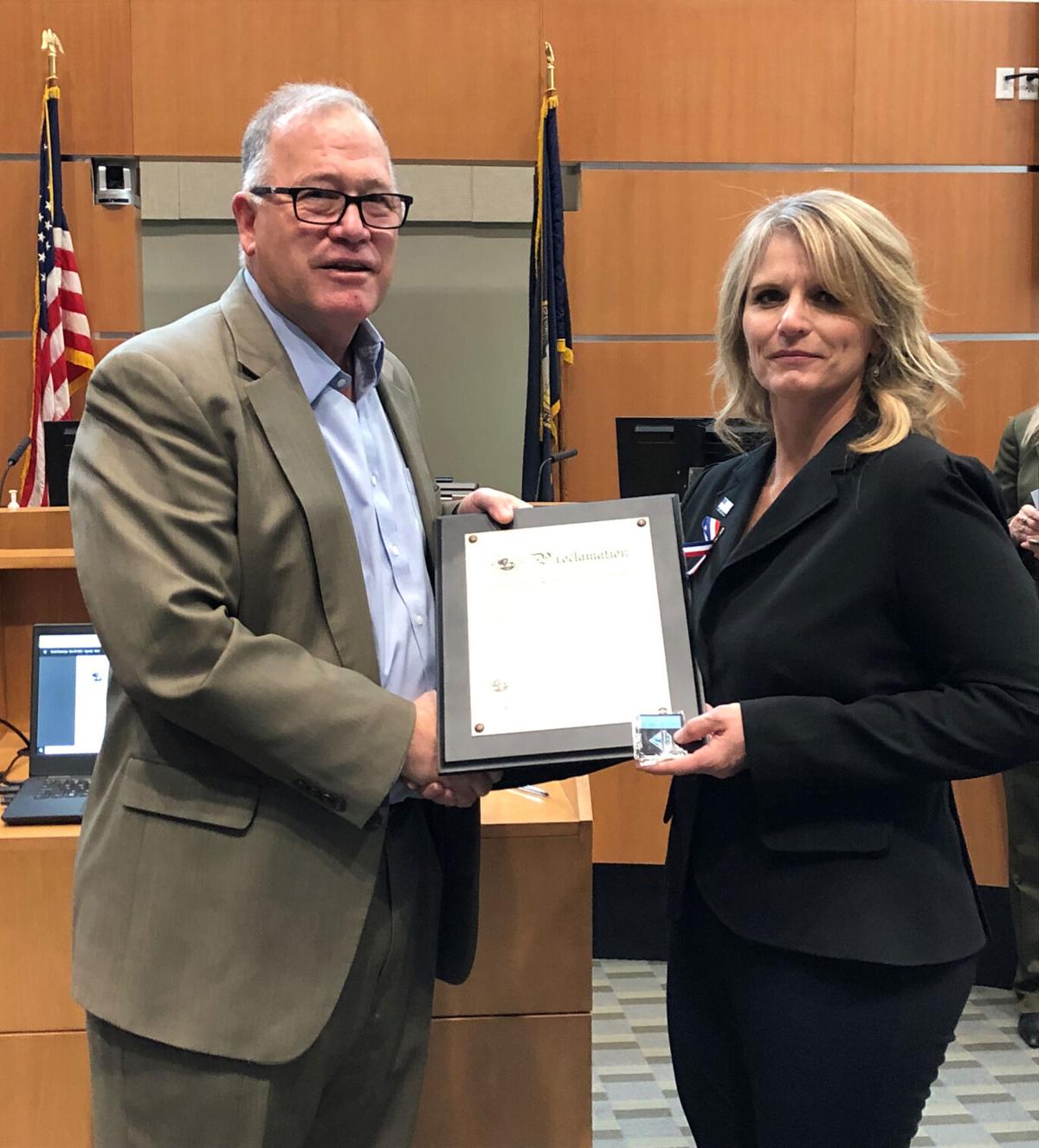 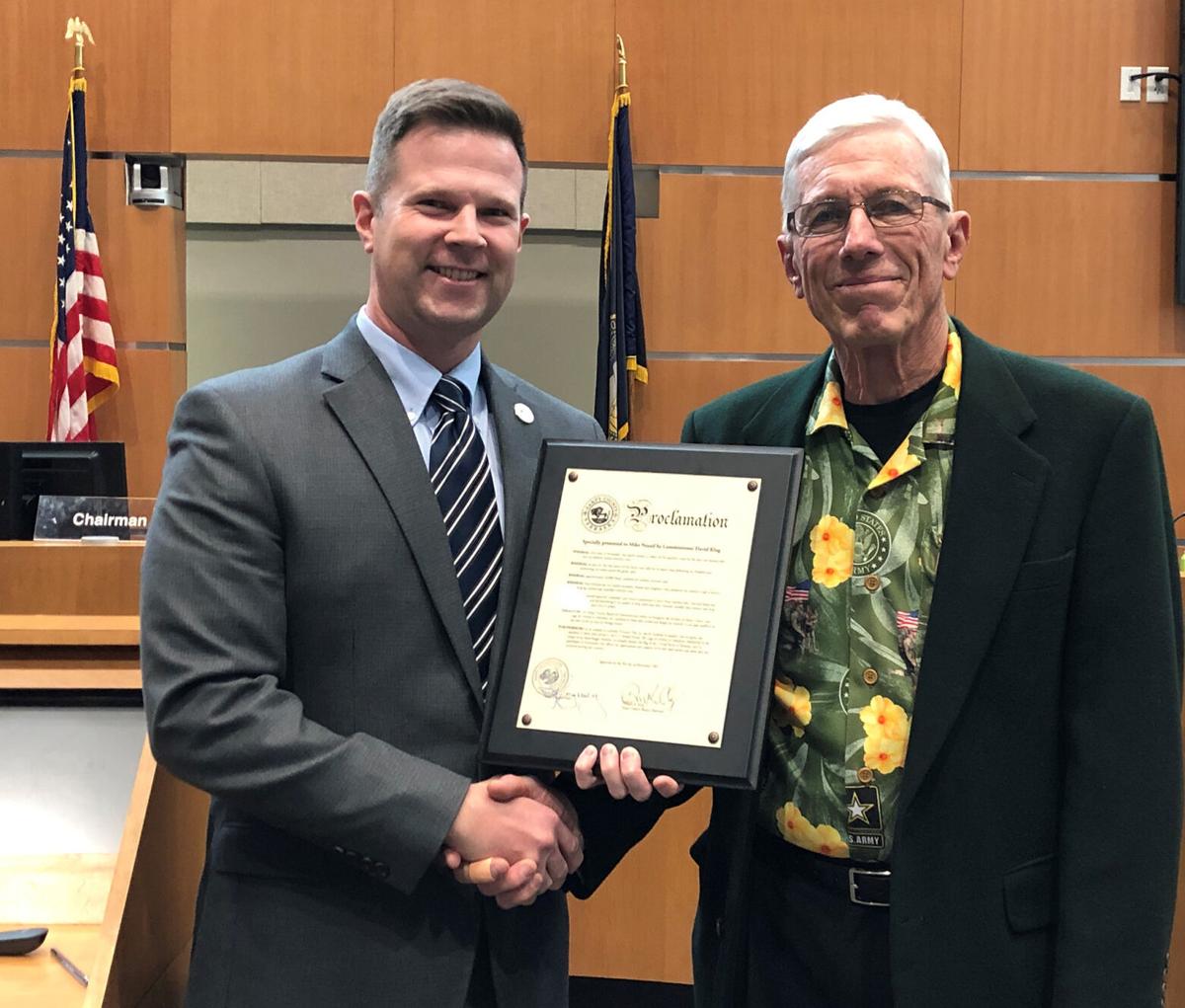 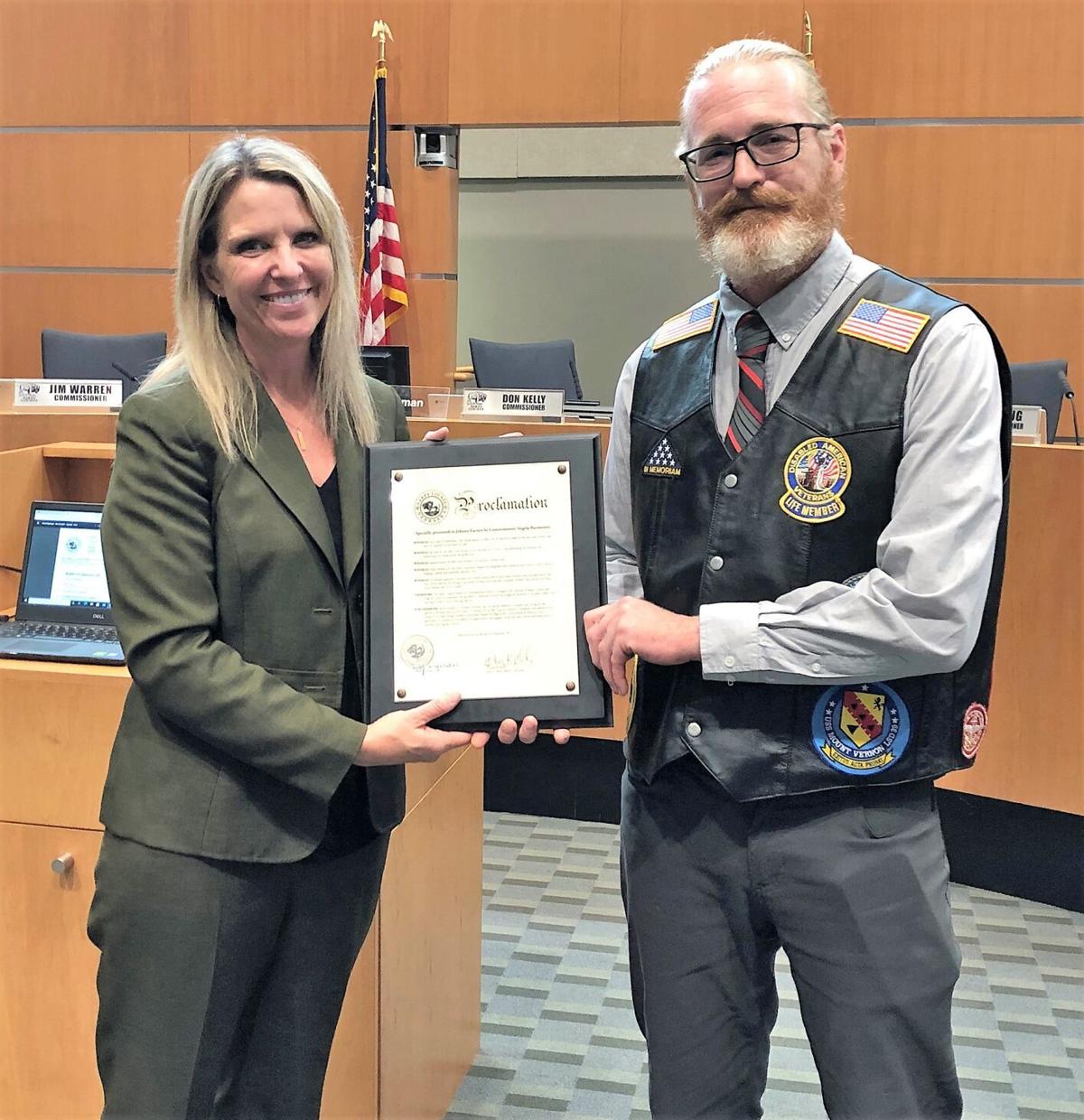 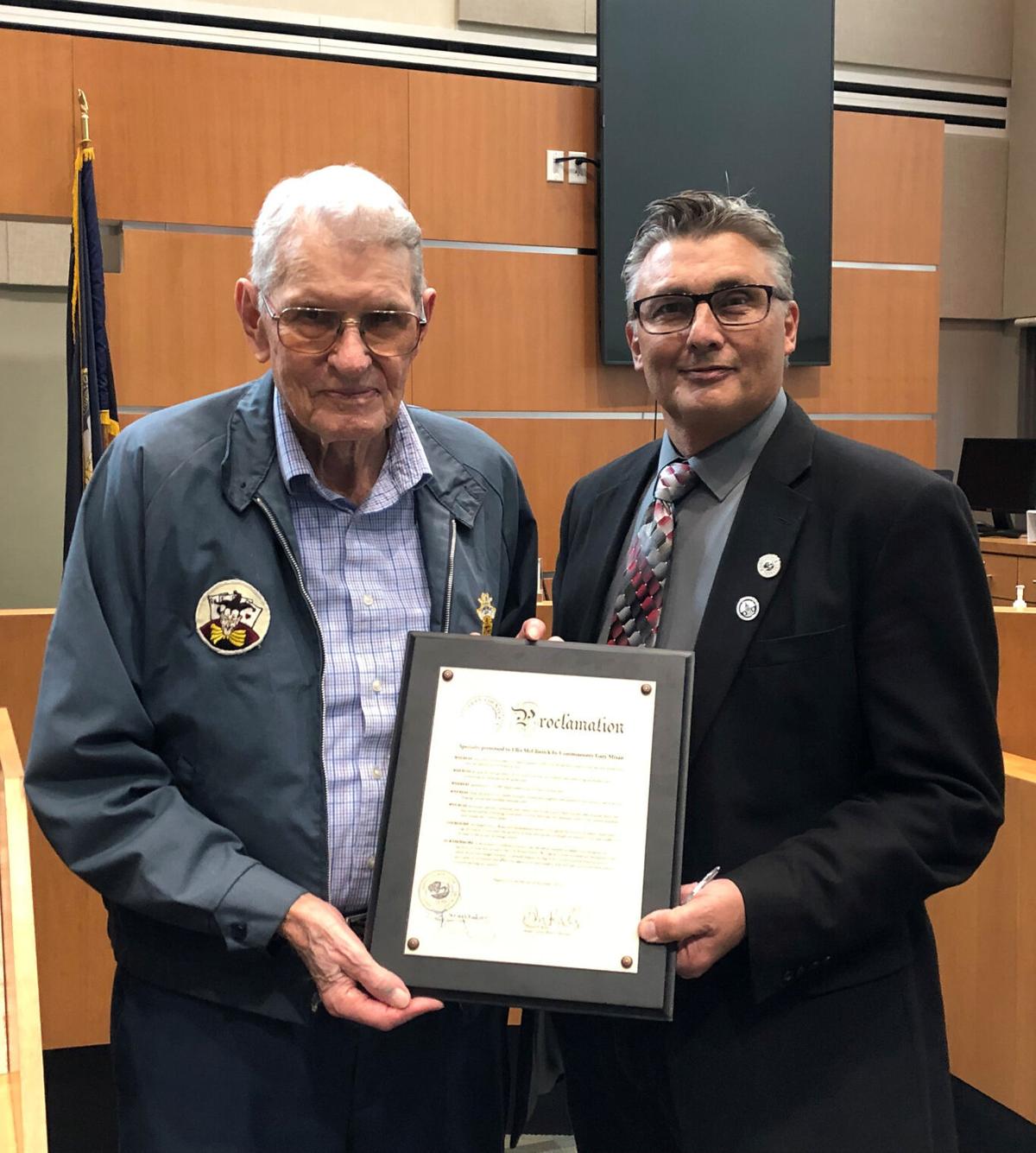 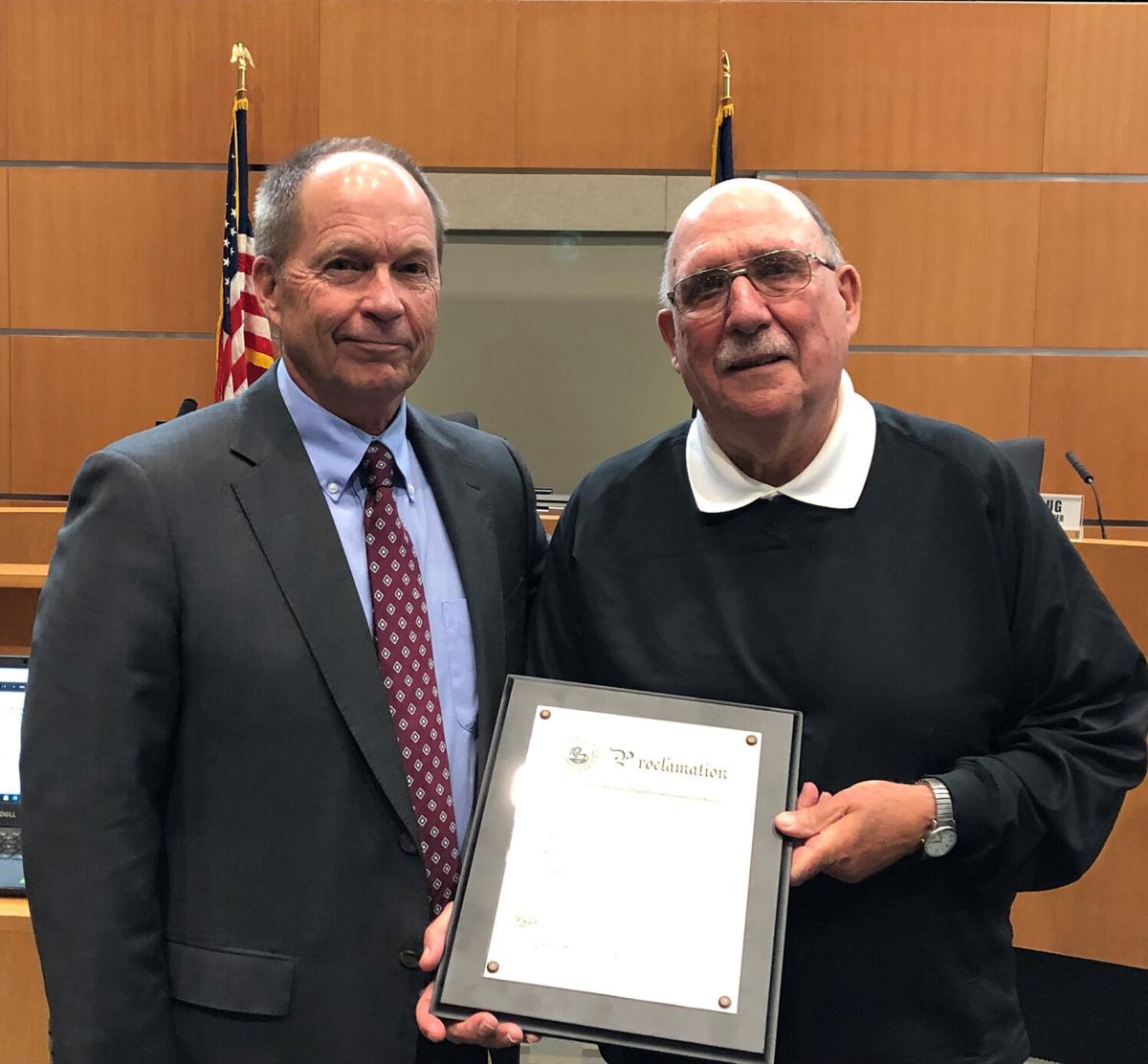 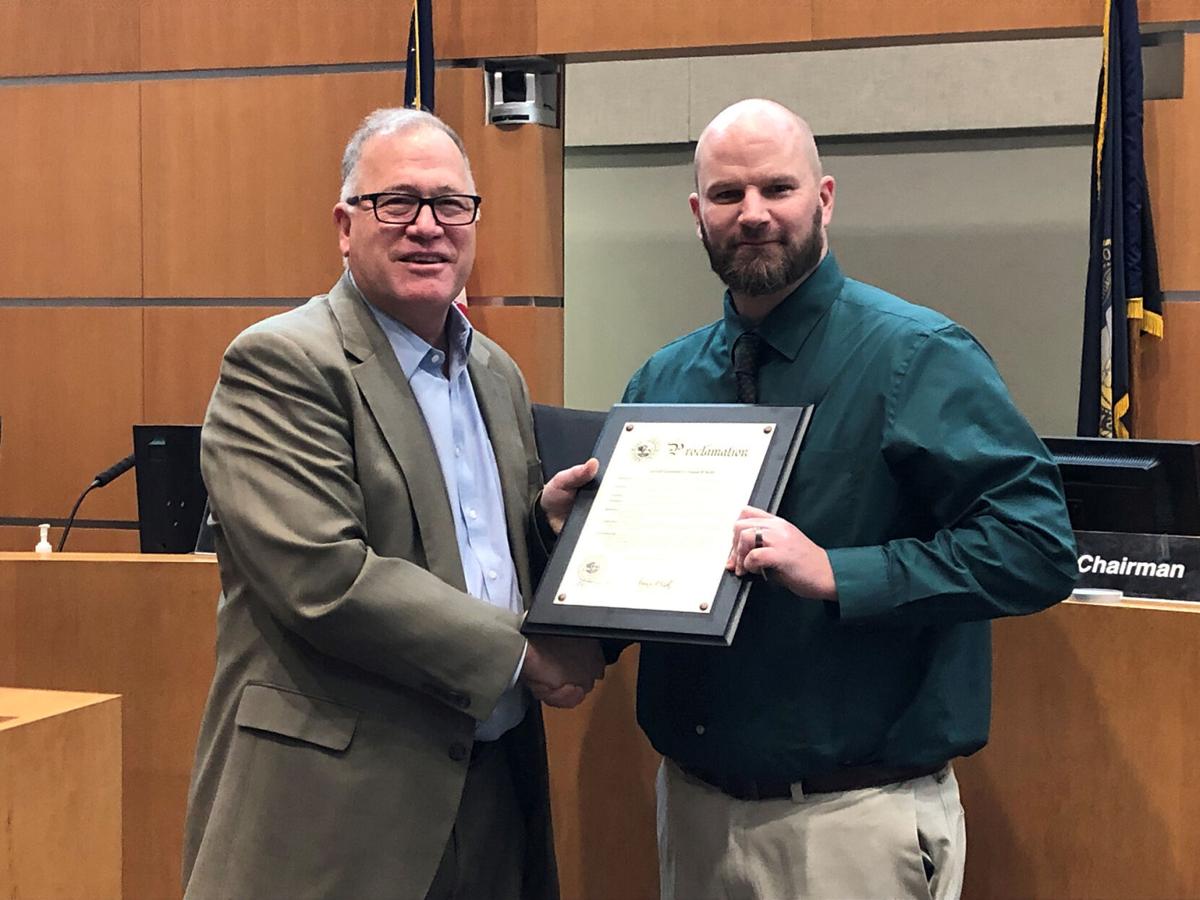 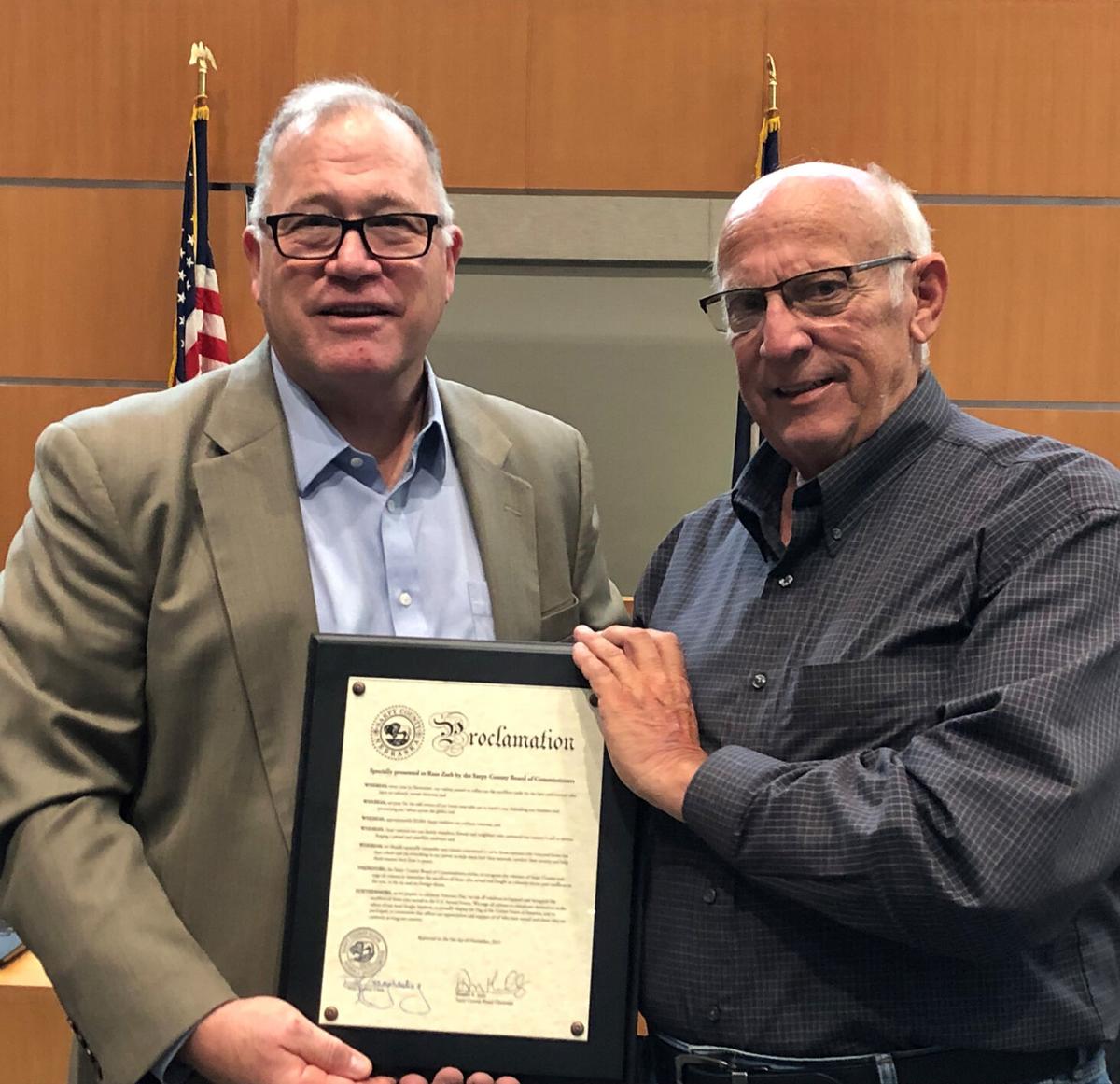 Papillion — In a touching session of its scheduled weekly meeting, the Sarpy County Board of Commissioners honored area veterans and bade farewell to a longtime friend.

To open the Tuesday, Nov. 9 meeting, board Chair Don Kelly paused for a moment of silence for Lynn Marshall, who died Nov. 4. Marshall spent the past 13 years as Sarpy County Emergency Management Director, and was an integral part of the county’s response to the historic flooding of 2019.

Following a bit of business, Kelly read a board proclamation for Veterans Day that “wishes to recognize the veterans of Sarpy County and urge all citizens to remember the sacrifices of those who served and fought so valiantly in our past conflicts on the seas, in the air and on foreign shores.”

Each commissioner honored a veteran from their district for their service in the United States military.

Ullom started the Omaha and Lincoln chapters of Guitars for Vets, a program providing free guitar lessons as a therapeutic alternative to veterans struggling with physical injuries, PTSD and other emotional distress. Kelly reminded the audience of the importance of mental health care, as an estimated 22 veterans take their lives daily in the United States.

— Commissioner David Klug (District 2) recognized Mike Neuzil, who was drafted into the U.S. Army in 1966. During his service in Vietnam, he was wounded in action twice, receiving a Purple Heart before being honorably discharged. Neuzil became a base forester at Eglin Air Force Base before his promotion to Chief of Natural Resources at Headquarters-Strategic Air Command, where he was responsible for the land management of more than 20 SAC installations across the United States.

Neuzil retired after 25 years as chief, joining the city of Papillion for 17 years. He continues to serve his community by volunteering at the Veterans Hospital and as a member of the Omaha National Cemetery Council.

— Commissioner Angi Burmeister (District 3) recognized Johnny Farnen, who served in the U.S. Navy for six years and now works as the manager of the Natural Science Laboratory at Bellevue University’s College of Science and Technology. During his time in the Navy, Farnen served as a gunfire controlman. He is always willing to help others and knows first-hand the impact and importance of helping other veterans after he received support from programs like the Disabled American Veterans.

— Commissioner Gary Mixan (District 4) recognized Ellis McClintick, who enlisted in 1942 and served for 30 years before retiring at the rank of colonel from the U.S. Air Force. During World War II, he worked as a navigator on 35 bombing missions over France and Germany. He was awarded the Distinguished Flying Cross. He also served in the Korean and Vietnam wars.

Ellis recently became a knight of the Legion of Honor, an honor given to him by the French government, for his dedicated service to protecting France during World War II. He is a founding member of the American Air Museum in Britain and served as the Grand Marshal for the 17th annual Sarpy County Defenders of Freedom Veterans Day Parade in Bellevue.

Colonel Ellis gently rebuffed Commissioner Mixan’s statement that he was member of the “greatest generation.”

“I can only say that my parents, our parents, were the members of the greatest generation. They not only lived the hardship during World War II, but sent their kids — four boys in my family — off to war,” Ellis said. “Luckily, we came back. But a lot of us didn’t.”

—Commissioner Jim Warren (District 5) recognized Tim Gilligan, who served in the U.S. Army from 1967 to 1970. Gilligan has been an active member of the Gretna American Legion since 1971, and he served as Post Commander from 1974 to 1976. He has been the Honor Guard Director for military funders for 25 years. Gilligan founded the Gretna Days Parade and served as the event’s chair for more than 30 years. He served 10 years on the Gretna Planning Commission and four years as Gretna’s mayor.

In addition, Sarpy County Veterans Service Officer Matt MacDonald honored Commissioner Kelly for his service in the U.S. Air Force. The board also recognized Russ Zeeb, an Army veteran who helped organize the proclamation ceremony. Zeeb served as a Sarpy County Sheriff’s Office deputy for 40 years and is a member of the Sarpy County Veterans Service Committee, the Papillion Volunteer Fire Department and the La Vista Community Foundation’s Salute to Veterans Committee.

In turn, Kelly gave every veteran in the audience a county “challenge coin.”

In other action, the board of commissioners:

Approved a resolution rezoning an area from agricultural farming district to single family residential District, and approved a preliminary and final plat for the area located at 216th and Harrison Streets that contains a communication tower. The owner proposes to sell the land it is currently leasing.

Approved a preliminary and final plat of five-lots for Advantage Business Park, located southeast of Highway 50 and Cornish Road.

The Sarpy County Board of Commissioners meets every Tuesday at 3 p.m. at 1210 Golden Gate Dr. in Papillion.

Before the last bite of pumpkin pie is finished, the holiday season begins in earnest with beloved annual traditions from the cities of Papill…

Will Moses has completed the Papillion Public Library’s “1000 Books Before Kindergarten” challenge. He will receive 10 free books, a T-shirt, …

Each member of the Sarpy County Board of Commissioners honored a veteran from their district for service in the United States military in a Veteran’s Day celebration on Tuesday, Nov. 9. From left to right: Commissioner Don Kelly (District 1) and Peggy Ullom; Commissioner David Klug (District 2) and Mike Neuzil; Commissioner Angi Burmeister (District 3) and Johnny Farnen; Ellis McClintick and Commissioner Gary Mixan (District 4); and Tim Gilligan, Commissioner Jim Warren (District 5), and Russ Zeeb.