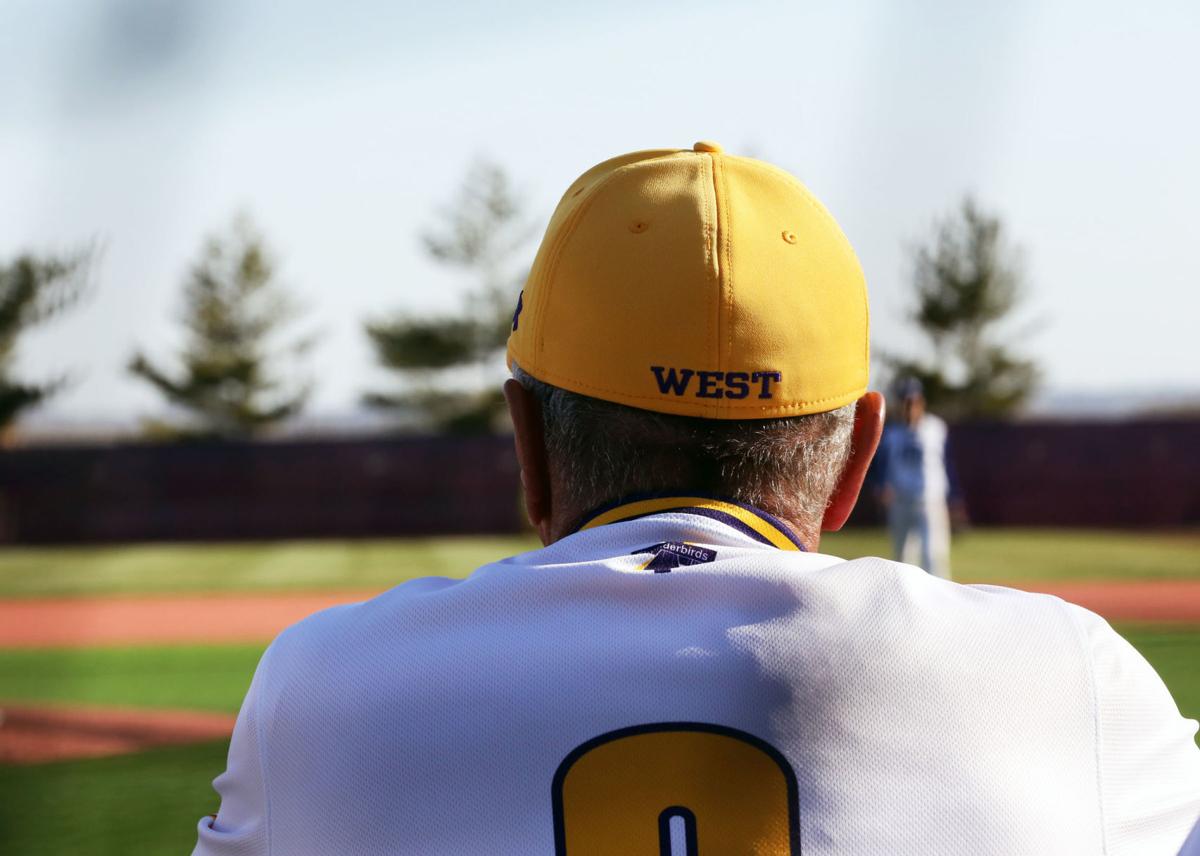 A Bellevue West coach stares across the diamond in the Thunderbirds’ win over Creighton Prep on April 2. 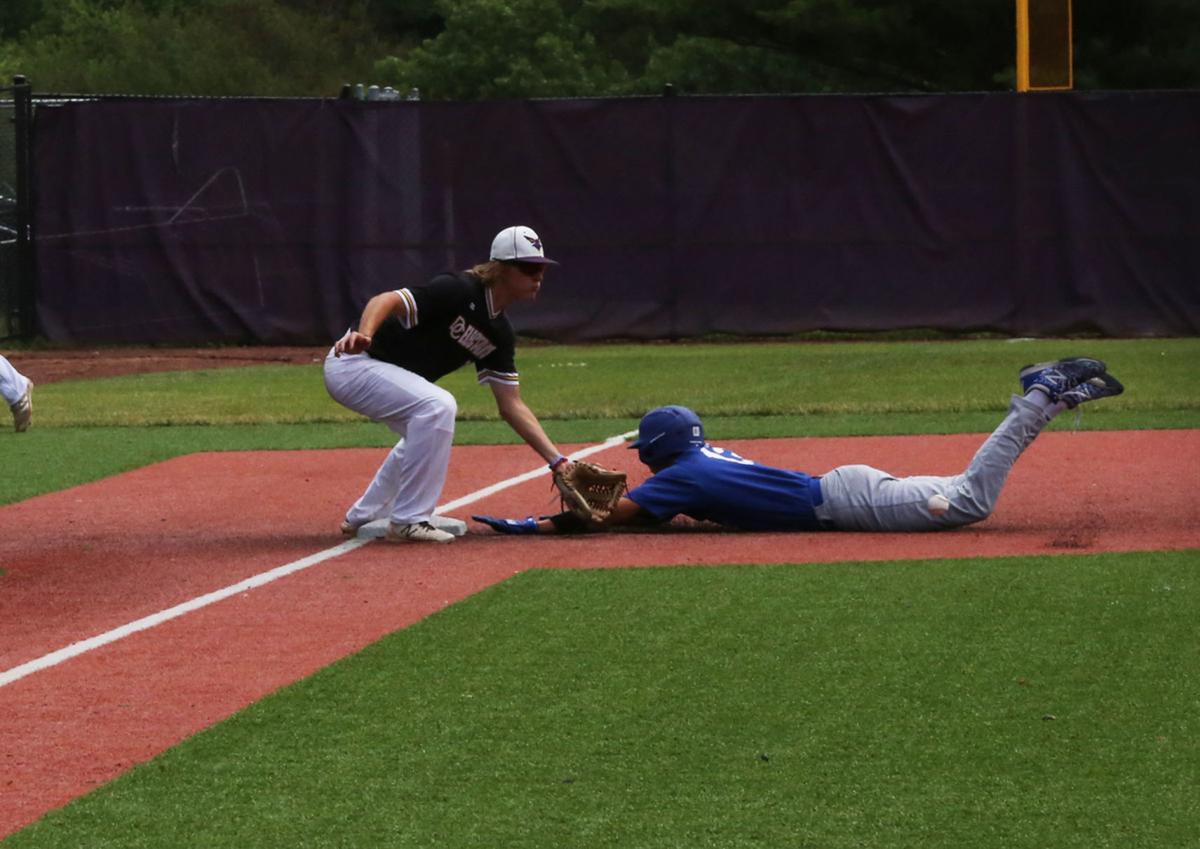 Bellevue West’s third-baseman, Gage Allen (No. 12, black), attempts to apply a tag to a Fargo baserunner in the Battle of Omaha tournament on June 25. 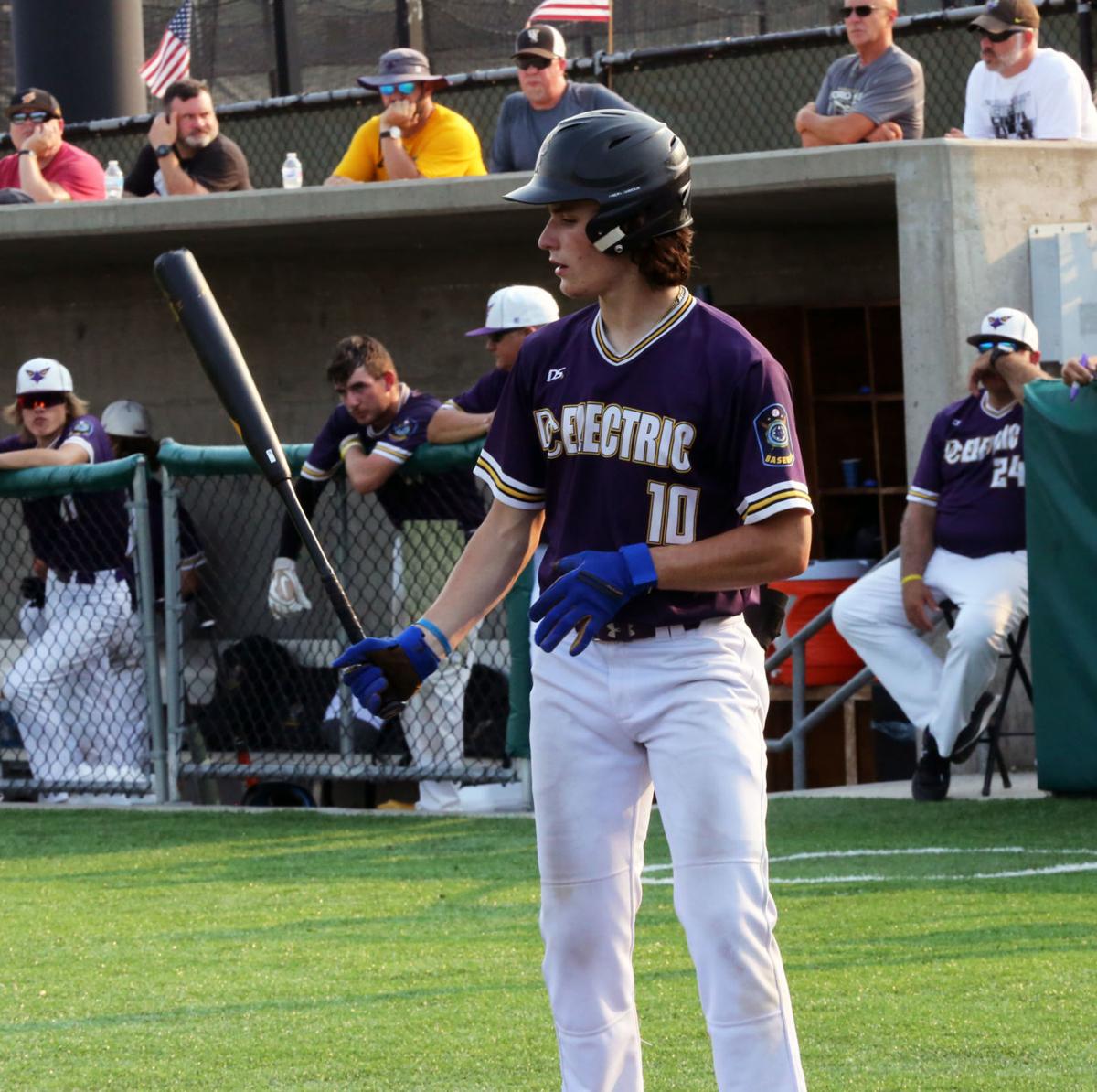 Bellevue West’s Jackson Allred (No. 10, purple) gets set in the batter’s box and awaits a pitch in a first round matchup of the legion state tournament against Gretna on July 24.

The Bellevue West Thunderbirds varsity legion baseball team’s impressive summer season came to a conclusion July 28 after suffering two losses in the 2021 legion state tournament, both to the Gretna Dragons.

The Thunderbirds, sponsored by DC Electric, finished with a 52-4 record, but could not bring home a state title after losing their second game of the tournament to Gretna.

The week began with the Thunderbirds beating Lincoln Southeast on July 26. Despite the Knights grabbing a late 1-0 lead in the top of the sixth inning, Bellevue West scored two go-ahead runs in the bottom of the sixth to eventually win 2-1. Connor Schneider and Gage Allen combined for DC’s two RBI as soon-to-be Husker Jaxon Jelkin pitched 6.2 innings, giving up only one earned run on one hit alongside six strikeouts.

Bellevue West then advanced to face Creighton Prep in another elimination night on July 27. The T-Birds won another low-scoring affair in the same 2-1 fashion. Neither team scored a run after the third inning, but that’s all Bellevue West needed as Schneider notched an RBI for the second straight day. Jack Bland got the start on the mound and threw a complete seven inning game with zero earned runs on three hits and five strikeouts.

However, the Thunderbirds tournament run ended with a 3-1 loss to Gretna on July 28. Easton York notched the team’s sole RBI in the top of the second but the Dragons scored two in the third and one in the sixth to take the win and play another day. Allen was the starting pitcher for the T-Birds’ final game of the year, finishing with six innings pitched, three earned runs on five hits and three punch-outs.

Following the conclusion of their season, head coach Jason Shockey posted a statement on Twitter.

“Today was definitely not the way that we wanted it to end but I am sincerely proud of how our guys competed all season,” wrote Shockey. “To finish the summer 52-4 and 81-10 overall is pretty special.”

Bellevue West’s roster will look remarkably different next spring and summer as they say farewell to numerous seniors. Assuming all goes according to plan, 11 now-former Thunderbird players will be competing on college rosters next time they suit up.

School Board Digest: Gretna board hears update on enrollment

At its Oct. 11 meeting, the Gretna Public Schools Board of Education:

The Bellevue East Chieftains hosted the Papillion La Vista Monarchs for their final home game of the year.

The cities of Papillion and La Vista are a hidden gem for golfing talent.

The Papillion La Vista Monarchs marched onto Bellevue East’s football field Oct. 14 and walked away with a decisive 54-7 victory.

October is Cyber Security Awareness month and one faculty member at Bellevue University is doing her part to celebrate it.

Bass Pro Shops and Cabela’s is gearing up for the holiday season across America, hiring 7,000 seasonal, part-time and full-time team members a…

A Bellevue West coach stares across the diamond in the Thunderbirds’ win over Creighton Prep on April 2.

Bellevue West’s third-baseman, Gage Allen (No. 12, black), attempts to apply a tag to a Fargo baserunner in the Battle of Omaha tournament on June 25.

Bellevue West’s Jackson Allred (No. 10, purple) gets set in the batter’s box and awaits a pitch in a first round matchup of the legion state tournament against Gretna on July 24.