Creighton men reloading, not rebuilding
0 comments
Share this
1 of 2 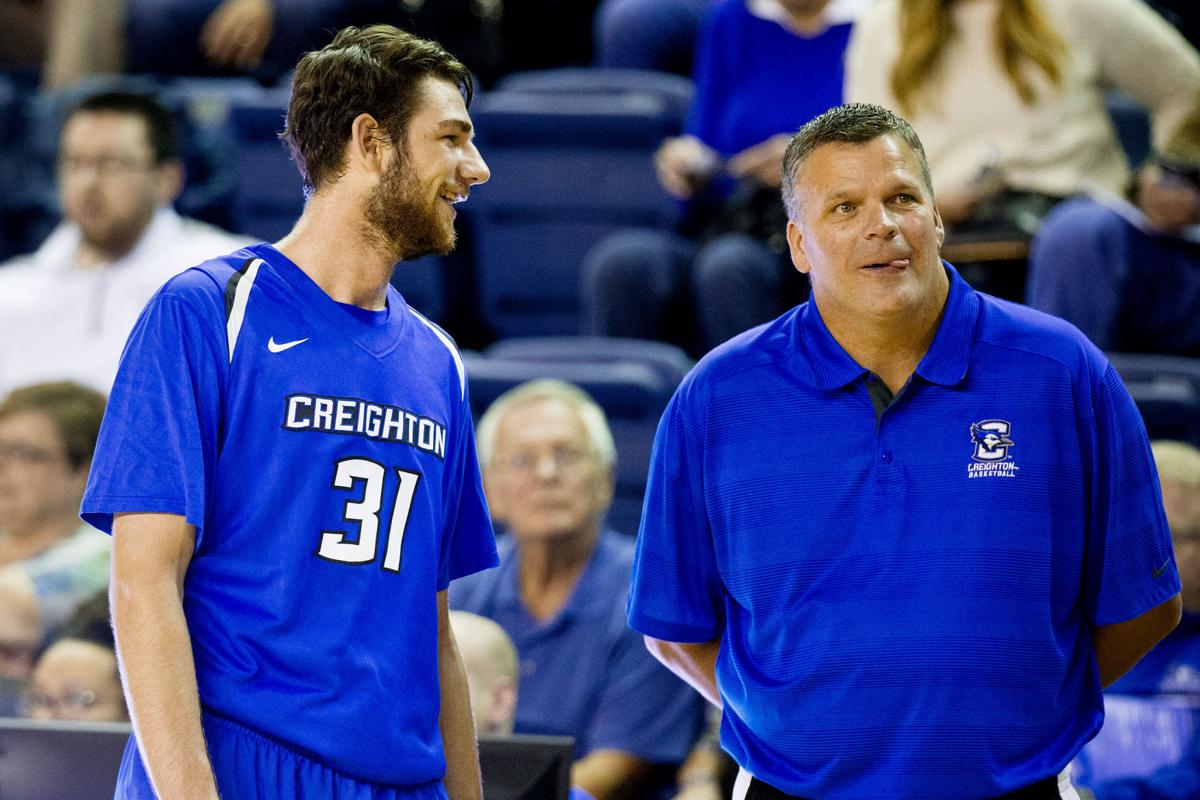 Creighton senior center Will Artino has played in 103 games for coach Greg McDermott. He started the first seven last year. 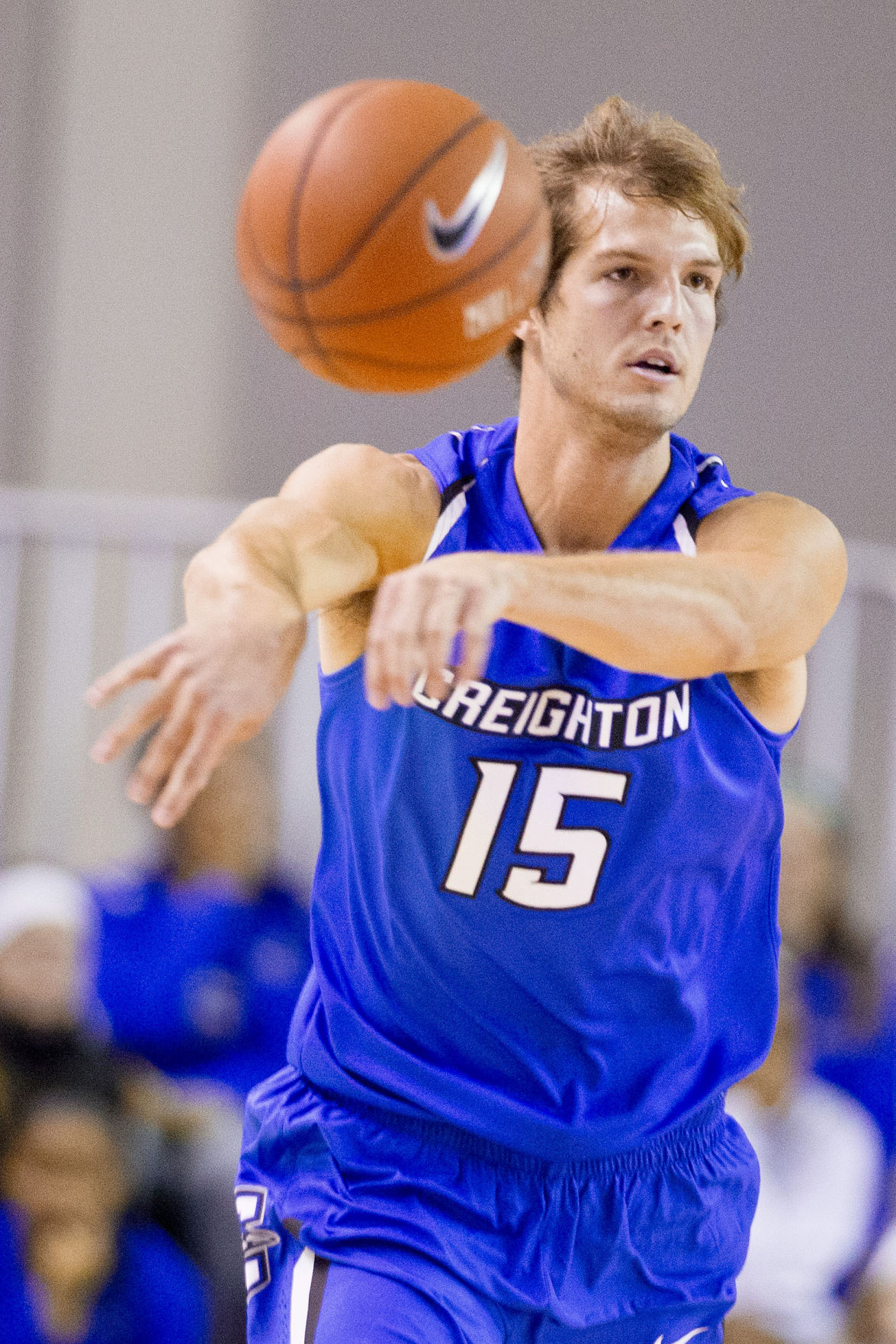 Creighton’s Ricky Kreklow is new to Creighton but not new to college basketball. The graduate transfer from California started his collegiate career at Missouri, playing in 32 games as a true freshman, and he played 33 games at Cal despite injuries.

That Doug McDermott guy is gone. So are Grant Gibbs, Ethan Wragge and Jahenns Manigat. And Creighton is taking the necessary measures to successfully move on.

The players looked around the weight room and Doug McDermott was nowhere to be found. Neither was Grant Gibbs nor Ethan Wragge nor Jahenns Manigat.

“Somebody said, ‘Where is everybody?’ ” Creighton center Will Artino said. “I was like, ‘This is it, this is our team. The other guys are gone.’ ”

They’ll never be forgotten. McDermott, Gibbs, Wragge and Manigat were the instigators of the greatest three-year run in program history: 84 victories, three NCAA tournament appearances, a regular-season and two league-tournament championships and a successful debut in a challenging new conference.

But as is the case in all aspects of college athletics, the page turns. The team Creighton puts on the court Friday for its season opener against Central Arkansas is loaded with guys who have waited their turn to show what they can do and newcomers eager to make a mark.

Point guard Austin Chatman is the only starter back, which has led many to label this season’s team as inexperienced. That’s hardly the case.

Another senior, Devin Brooks, played in 34 of 35 games last season, his first in the program after two seasons of junior-college competition. Then there’s Ricky Kreklow, the graduate transfer from California. He started his collegiate career at Missouri, playing in 32 games as a true freshman. Injuries limited him to 33 games at Cal, but he’s hardly some unproven rookie.

“It’s not often you lose four starters at once,” Creighton coach Greg McDermott said. “That in itself is a little rare. Yet, we lose four seniors, but we have five seniors on the roster. It’s not like we don’t have any experience there.

“Some of the guys have played different roles, but all five have played in an NCAA tournament. We have guys that understand what it’s going to take to be successful.”

That group includes guard Isaiah Zierden and Zach Hanson, who both saw action last season as reserves. Geoffrey Groselle, a 7-foot center, is starting his fourth season in the program, although his playing time has been limited by lower-leg injuries.

While they lack game experience, Toby Hegner and James Milliken got a chance to learn Creighton’s system as redshirts last season.

How Greg McDermott and his staff are able to meld and mold this group should make for an interesting ride over the next four months. Outsiders are convinced the Bluejays are going to be hitting plenty of potholes along the way.

They were picked to finish ninth and in the Big East preseason poll. Most other preseason forecasts have them mired near the bottom of the league, although a couple of analytic-driven predictions have Creighton finishing fourth.

“We want to prove people wrong,” Chatman said. “That’s going to be our fuel every day when we step on the practice floor.”

Chatman called the Big East poll, voted on by the league coaches, “a little bit disrespectful.” At the same time, it provides incentive.

“We’ll definitely remember it,” he said. He smiled, then added, “Every day at practice.”

Overall, Creighton returns players who started 49 games last season. Chatman started 35 and Dingman seven when Gibbs was injured. The 6-11 Artino started the first seven before the Bluejays decided to go with a smaller lineup that featured the 6-7 Wragge at the center spot.

The 49 returning starts are the second fewest since the 1985-86 season. The 2007-08 Bluejays returned players who started 44 games the previous season. Creighton managed to win 22 games in 2007-08 and finished its season in the National Invitation Tournament.

What remains to be seen this season is how Creighton adapts its style of play with the departure of Doug McDermott, the consensus national player of the year who finished fifth in Division I history in career scoring with 3,150 points.

“We had become so accustomed to Doug getting 20 points a game over the course of three years,” Greg McDermott said. “I’m not sure we have a guy that can give us 20 points a game night in and night out.

“We have several guys that can score 20 in a particular game, but now it’s about trying to develop some consistency throughout our lineup. Last year we pretty much knew who we were going to have on the floor in every situation, but now we have to sort through those situations.”

Chatman, the team’s top returning scorer at 8.1 points per game, is ready to take on a greater scoring load. Brooks showed high-risk, high-reward tendencies last season but could develop into a more consistent scoring threat.

Milliken showed solid offensive skills while running with the scout team last season, while Zierden can be a deadly shooter from beyond the arc.

“I think we could have more of a guard-oriented system,” Chatman said. “I think we’re going to try to use more ball screens than we have in the past and get up and down in transition.

There had been speculation that with Artino, Groselle and the 6-9 Hanson that Creighton might become more inside-oriented in its attack. But with the offseason development of the 6-10 Hegner — a big man with more of a perimeter-suited game — it appears the Bluejays won’t shy away from letting 3-point shots fly.

“We have to make shots from the perimeter,” Greg McDermott said. “That’s who we are.”

The Bluejays also are a prideful group, used to winning and playing for high stakes. The players insist things are not going to change.

“No one wants to be the team that falls back, that takes a step back,” Artino said. “We might not have the same individual talent that we had, but we’re still a cohesive group that can beat a lot of teams that have more talent.

“We’ve always been about team first here, and that’s not going to change.”

Creighton men's basketball players will host a fan fest Oct. 23 inside the CHI Health Center, an event made possible by the new NIL options in college sports.

How does Creighton go about cultivating the next elite shooters to space the floor, ignite the offense and take pressure off a team that'll need to grow in multiple areas? Jon Nyatawa takes a look.

With team of newcomers, building a defensive foundation is key for Creighton basketball

Creighton is known for pushing tempo, shooting 3s and scoring points, but the Jays can't win at the sport's highest level without consistently getting stops. So that's where their focus has been.

Creighton Athletics Hall of Fame inductee Pat Venditte is convinced that his own success — at Creighton and in the minors and the majors — wouldn't have been possible without Chris Gradoville.

The Jays finished with a .316 hitting percentage, their second-highest mark of the season and their best in three seasons against Marquette.

Creighton women's basketball took momentum into the offseason after a trying year. And though they'll certainly face more adversity, they believe they've developed a strong team bond to handle it all.

Creighton volleyball rallies in each set to sweep DePaul

Creighton volleyball fell behind early in all three of its sets against an upset-minded DePaul team, but the Jays rallied each time to secure a sweep.

Creighton men's soccer needed a second-half scoring explosion to get it done against Villanova, who came into Wednesday's action tied for first in the Big East standings.

Even in front of NBA scouts, Creighton basketball's focus is on 'getting better'

Even though Creighton basketball practiced in front of NBA scouts on Tuesday, the end goal remained the same as it's been lately. Capitalize on every moment together because they have room to grow.

Alex O'Connell faces big opportunity with Creighton, and he's 'been waiting for this'

Alex O'Connell enters his second season at Creighton after transferring from Duke, expected to be one of the Jays' top producers and a team leader. "I've been waiting for this moment for a while."

Creighton senior center Will Artino has played in 103 games for coach Greg McDermott. He started the first seven last year.

Creighton’s Ricky Kreklow is new to Creighton but not new to college basketball. The graduate transfer from California started his collegiate career at Missouri, playing in 32 games as a true freshman, and he played 33 games at Cal despite injuries.