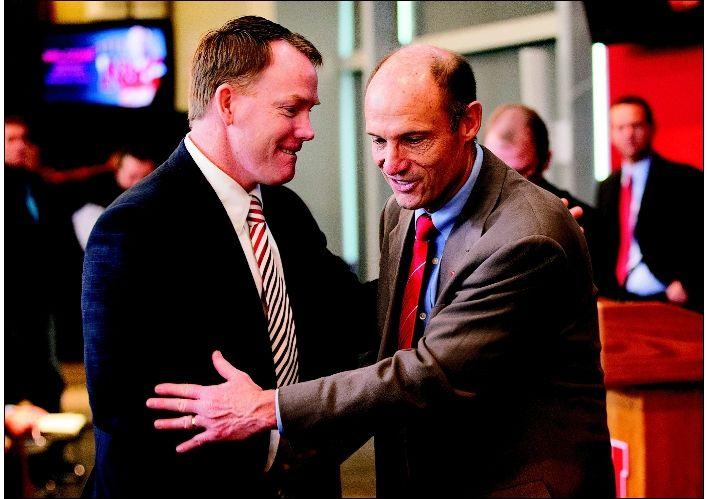 NU Athletic Director Shawn Eichorst, left, and new football coach Mike Riley after Friday's press conference. Eichorst said that a day after firing Bo Pelini, he identified Riley as the coach he wanted, and "I recruited my tail off like I've never done before." 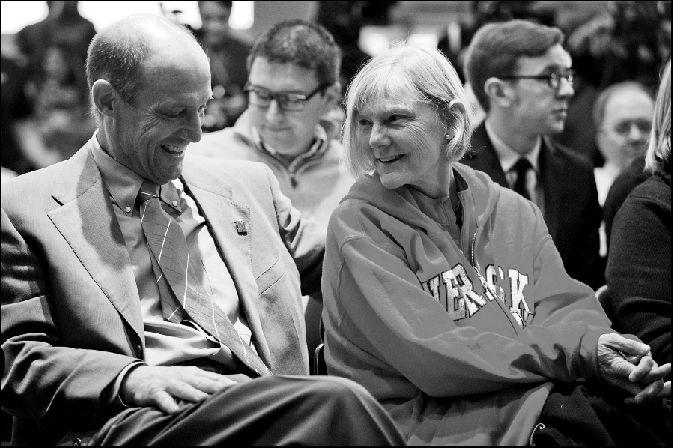 New Nebraska football coach Mike Riley talks with his wife, Dee, before his first press conference Friday. He called the position a chance to "try something new one more time."

'HE IS A FOOTBALL COACH'

LINCOLN — Mike Riley walked to the microphone on the third floor of Memorial Stadium with a smile and a "hello, everybody." A second later, almost as a reflex, Nebraska's newest football coach gently hitched up both sides of his trousers and subtly leaned into Husker history.

The son of a football coach, a man who grew up inside locker rooms, Riley described himself Friday as a "football junkie." He even owns — and quotes from — one of Husker legend Tom Osborne's books. He coached in 10 different places over the first 27 years of his career.

But since 2003, he'd settled in his adopted hometown of Corvallis, Oregon. Home of Oregon State. Riley had turned down several job opportunities in order to stay the coach of the Beavers, too. And as of Sunday night, Riley and his wife, Dee, had no particular intention of leaving there.

So what was the 61-year-old doing in Nebraska on Friday, talking to more than 100 media members, Husker administrators and current players, embracing the expectations of a job where seven straight nine-win seasons weren't enough for the former coach to keep it?

Taking one last shot at a school with all the bells, whistles and history a college coach could want.

"It's a matter, really, at this point, if you want to do something like that, right?"

Mike Riley said. Dee Riley sat in the front row wearing a red Nebraska hooded sweatshirt. "You're getting to the point — at the stage of my career — it was an opportunity to try something new one more time. We've had great experiences — I've enjoyed every one of them — that have all built who we are as people, as a family, as a career.

"If you're going to do it one more time, this, obviously, is a great chance to do that at a great place."

In return, Nebraska Athletic Director Shawn Eichorst said, Nebraska got a "special man" who maximized resources at Oregon State. Riley finished 93-80 there — a record far less sparkling than Bo Pelini's 67-27 record at NU — but the Beavers also had endured, at one point, 28 straight losing seasons. The Beavers were also paying Riley just $1.5 million, far less than the $2.7 million he'll make to start with at NU, with $100,000 increases each year during his five-year contract.

"We have an elite football coach who now has an incredible history behind him, incredible resources, a passionate fan base," Eichorst said. "I know there is uncertainty in our fan base, but we have a good football coach, and I think folks should be ready and excited to unite and take this program to where it should be.... We're going to have success. I know that and you can hear it in Mike's voice. He is a football coach."

He's one Eichorst said he's been watching for 10 years, since his time at South Carolina, where he said he assisted in the hiring of current Gamecocks coach Steve Spurrier. After Eichorst fired Pelini Sunday morning, then met with Husker players Sunday night, he took a "deep breath" and reset for Monday, the day he called Riley.

"I reached out with him to see if he'd be interested in the job," Eichorst said. "He was. At that point, I recruited my tail off like I've never done before. I was focused. I was locked in. I knew what I wanted."

Riley was in San Francisco recruiting players for Oregon State. By chance, University of Nebraska-Lincoln Chancellor Harvey Perlman was also in San Francisco. Stay put, Eichorst told Perlman. He did. Eichorst flew commercial to San Francisco, and the two NU officials met with Riley Hiesday at an area hotel. By the end of the meeting, Eichorst and Perlman agreed: This is the guy.

"You're looking for someone who fits Nebraska," Perlman said. "What are we like? Not much ego. I think we work hard. I think we are competitive. Mike seems to have all those traits."

Eichorst called Riley back, discussed the fit of the job and by Wednesday night...

"We had a ball coach," Eichorst said.

This was a buoyant, more aggressive side of Eichorst on Friday, a contrast to the measured, cautious persona he'd shown to reporters and fans to this point. He touted Riley's Oregon State teams as playing "sound, physical" football and cited Riley's "record of evaluating and developing talent." He mentioned Oregon State's recent upset of Arizona State — a beacon in an otherwise disappointing 5-7 season — as an "incredible achievement." Eichorst had "zero concern" about Oregon State's recent struggles or Riley's overall record.

Nor is Eichorst concerned the 61-year-old Riley — older than Tom Osborne was when he retired in 1997 — is anywhere near his own retirement.

Riley backed it up.

"It's always surprising when somebody says I'm 61," he said to reporters later. "It doesn't quite connect with me.... I've never thought of an end game or a retirement."

After playing at Alabama from 1971 to 1974 — Riley recalls as a freshman watching Nebraska's Johnny Rodgers run "all over" the Crimson Tide in the Orange Bowl at the end of the 1971 season — Riley embarked on his coaching career. He worked on the offensive and defensive side of the ball but eventually became known for being an offensive mind. Riley said Friday that he's tried to cater his scheme to the talents of his players, running a "smorgasboard" of offense.

"We certainly have to establish an identity, and the identity has to be a blend of a system of what the players are comfortable with and good at," Riley said. "I think that's coaching. You take your talent and you make sure it's the right fit for the system. Then you adapt that system as best you can to the team."

Riley didn't know much about Nebraska's roster, however, other than meeting with the team Thursday night. Riley said that he thought the meeting went well and that most players — the program was notably loyal to Pelini — came up to him afterward to introduce themselves or say hello.

"They're facing a time of uncertainty like I mentioned earlier," Riley said. "And that's not going to go away just because we're talking about it right now. It's going to take time to get past all of that. It all goes with knowledge and then trust as time goes on."

Said freshman receiver De'Mornay Pierson-El: "He plans to do a lot of great things here. That's what I got from it. He's a one-of-a-kind coach from what people say and from what I've picked up so far."

Riley also wouldn't yet talk about how he'd build his assistant coaching staff; even though he expected to bring some of his Oregon State assistants with him, "some of them I intend to bring don't even know it yet."

Riley said he believes assistants should be "experts" at coaching their position, with "discipline" and "vision" for helping players grow. That's especially important, Riley said, when a team struggles.

"You've got to be able to work with your team, give them concrete evidence on how it's going to get better, and then teach it," he said.

Eichorst did not give a dollar amount for the assistant coaching salary pool but said Nebraska will be "competitive" in offering salary packages.

"I'll have fun being a fan for that game," Riley said. "It'll be different. But that will be fun."

Nebraska's storied walk-on program, Riley said, is "great" and "full of neat stories" as he launched into his longest answer of the press conference about some of the walk-on success stories at Oregon State.

Riley equally praised Nebraska's facilities. On cross-country driving trips, Mike and Dee would occasionally stop in some town and just check out a football stadium. Mike said Dee never quite understood that but indulged it anyway.

"I was impressed by how big it is," Riley said. "I imagine it's pretty loud and tight in there. It's kind of what I thought, but seeing it firsthand is even better."

By this point, Riley was surrounded by reporters in a way he probably never was at Oregon State. Photographers took pictures from the fourth floor of the stadium, looking down on the third. Eichorst was in one corner talking to reporters. Nebraska basketball coach Tim Miles — who'd come up to watch the press conference — was down the hallway holding his own minicourt of reporters.

Just a week ago, Nebraska was finishing off a dramatic win at Iowa. Players and coaches had no idea of the drama to come. Riley's hiring — and Friday introduction — is part of what will now be a whirlwind year for the Rileys and Nebraska football.

Will NU win big? Can this decision pay off?

"I'm very confident in the history and the performance in general with Nebraska football, with hard work and what we do as coaches, we'll be searching for that opportunity to win championships," Riley said.

The search for titles continues. At least the new leader of that search party has been found.

"I tllink folks should be ready and excited to unite and take tl lis program to where it should be.... We're going to have success. I know that and you can hear it in Mike's voice. He is a football coach."

This week shows that the AD is confident, in charge and sneaky good, Tom Shatel writes.

Riley says he'll bring some coaches with him but might retain NU assistants, too.

The lessons of losing

Failure brings with it a few too-often ignored benefits, a lesson another NU coach has learned, says Dirk Chatelain.

See it for yourself

Watch Friday's introduction of Riley in Lincoln and keep up with the latest news on his hiring. Omaha.com/riley

NU Athletic Director Shawn Eichorst, left, and new football coach Mike Riley after Friday's press conference. Eichorst said that a day after firing Bo Pelini, he identified Riley as the coach he wanted, and "I recruited my tail off like I've never done before."

New Nebraska football coach Mike Riley talks with his wife, Dee, before his first press conference Friday. He called the position a chance to "try something new one more time."