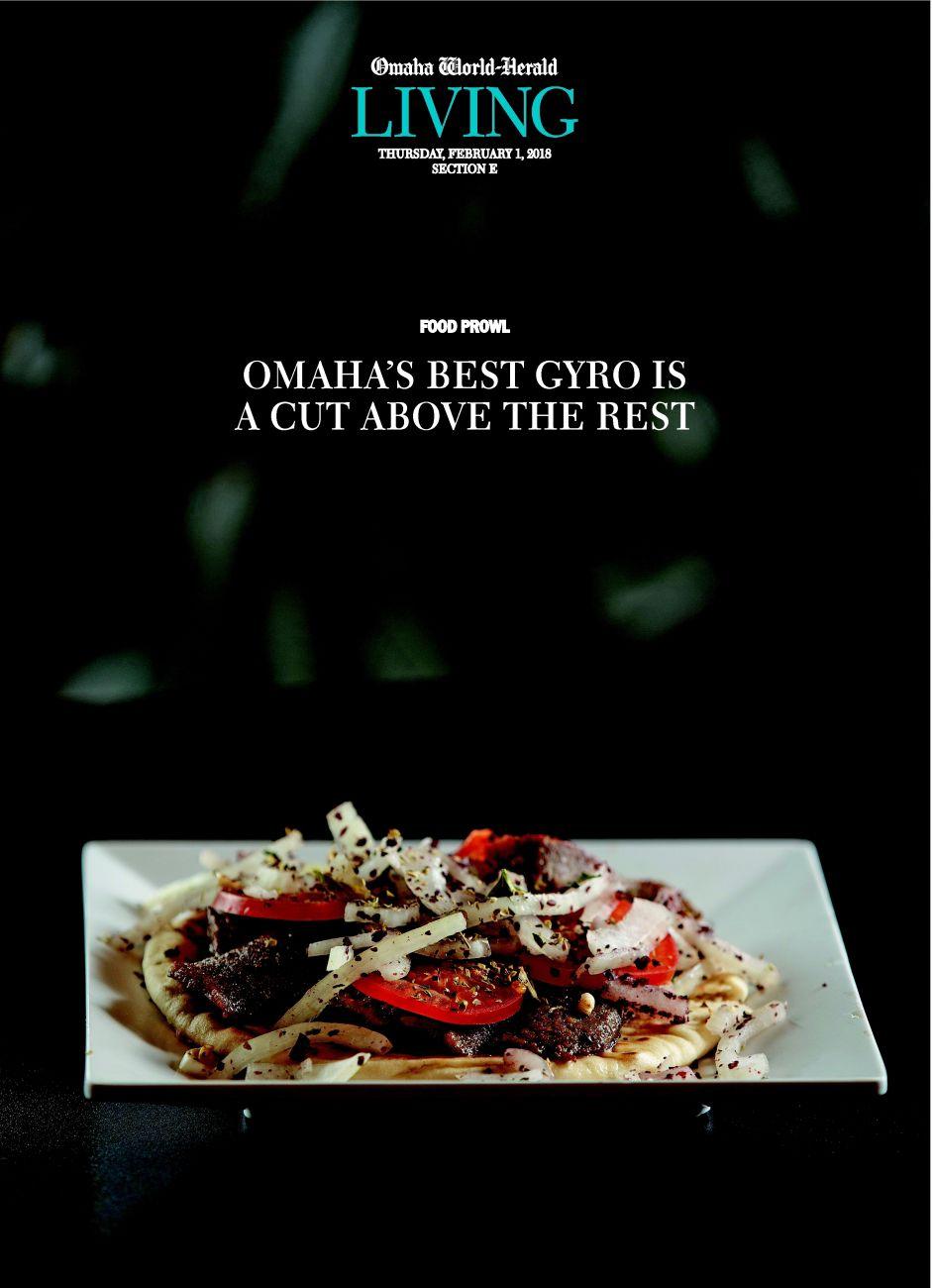 The Food Prowl's favorite gyro, pictured above, is served with expertly cut and seared meat, a warm pita, fresh herbs and one surprise ingredient that set it apart from all the others. 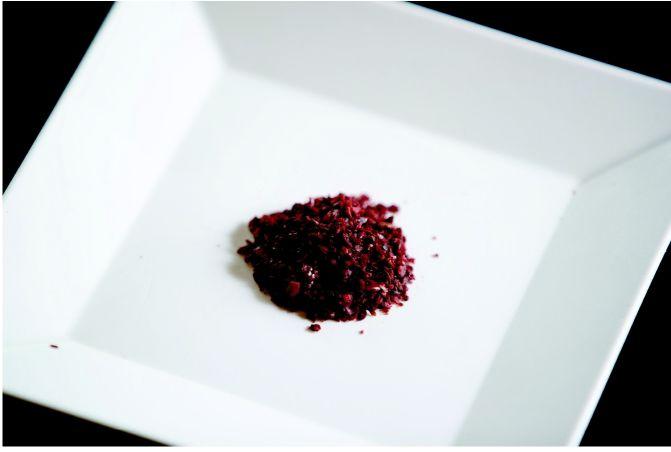 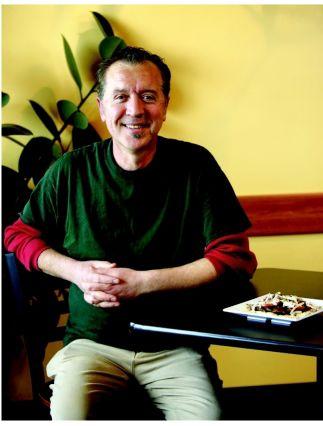 Legacy Gyros' use of sumac, the purple spice with a tangy flavor shown at top, sealed Legacy's superlative ranking for the Food Prowl judges. Volkan Soyulmaz, above, owns the west Omaha restaurant.

If you think all gyros fit the mold of late night food that tastes best after a couple of drinks, that they are the kind of food that has no variation and no nuance, well ... . After eating more than a dozen, I can assure you that's not true.

In the first Food Prowl of 2018, our team found gyros and kebabs with expertly cut meat sizzled until crisp on a flattop grill. Gyros topped with bright, fresh herbs and sauces heavy with fresh cucumber or thick with garlic. We found juicy diced tomatoes and carefully sliced fresh onions, and pitas not just warm, but crisp and seasoned.

Of course, there's a handful out there not to like — the kind of gyro that might win a "best eaten late at night after a beer or three" prize.

But those are not the dishes we're here to talk about today. These are Omaha's best gyros, culminating with the team's favorite of the 11 spots we visited. Our top pick bested a gyro we thought was going to be our hands-down winner thanks to one judge's last-minute change of heart — and, of course, its singular flavor.

It quickly became clear for our judges — Paul and Jessica Urban, owners of Block 16 (formerly New York Chicken and Gyro) and charcuterie expert Bryce Coulton, of the Grey Plume (formerly of The French Bulldog) — that places where ingredients were simply tossed in a pile and served on a plate were not going to contend.

"It has to be mindful," Bryce said. "Each part of it has to stand on its own."

Indeed. We found our initial favorite the first evening at El Basha, a standout spot for everyone on the panel. Each piece of the sandwich, like Bryce said, could have stood on

VIDEO ONLY ON OMAHA.COM

The owner of the winning restaurant says the key to his tasty gyro lies in how evenly he slices the meat.

its own. The tzatziki sauce had plenty of cucumber, but the flavors were still balanced, and the dollop of sauce didn't overwhelm the meat. Thinly sliced onions sat next to neatly chopped tomato.

The pita itself had blackened grill marks and a shine from a brush of olive oil. It would have been great served alone, dipped in hummus.

The tidy pile of meat — expertly shaved, in Jessica's opinion — had a crisp, seared exterior and each piece was of relatively even size.

"You can tell they care about it," she said. "Cooking and cutting is really important."

It became more important in the coming days. We watched cooks at a handful of our stops shave cones of meat into hourglass shapes and points, meaning that the meat on our plates almost always arrived in uneven hunks — some pieces too thick, some too thin. It left us with a gyro that simply wasn't as good. The thicker pieces were often soggy in the center, while too-thin ones dried out.

Jessica and Paul served a gyro at their restaurant, Block 16, for many years, and Jessica said cutting the cone is a skill that's hard to learn — and a lot harder than it looks. When every single gyro place uses the same main ingredient, a cone of meat that's likely a blend of lamb, goat or beef, the details and skill matter even more.

At Legacy Gyros, we watched owner Volkan Soyulmaz expertly slice an even cone of meat.

"This is legit," Paul said. "I like it." That sprinkle of sumac made all the difference. "It lifts the whole thing up," Bryce said. But we still had a half dozen spots to visit. Diners who like their gyro with a hit of spice have two spots to check out. At Feta's off 114th Street and West Dodge Road, we fell in love with the house spicy option. The kitchen spreads a blend of hot sauce and feta cheese on the bottom of the gyro, between the pita and the meat. It added heat, yes, but also wonderful texture and temperature contrast. Adana's Kebab House, in Bellevue, has a similar spicy feta sauce that's worth sampling. We tried ours as a dipper, but next time, I'd get it on the actual sandwich. At Jim & Jennie's Greek Village, we of course tried the gyro, which was good. But the team got more excited about the rest of the menu: Jessica had been looking all over Omaha for souvlaki, a skewered meat dish she used to serve at a Canadian Greek restaurant.

And Paul loved the smelt fish — if you're feeling adventurous, get it. You eat the whole tiny, crisp-fried fish in a couple bites, tail and all. And, just for fun, we ordered the restaurant's house specialty, saganaki, which is brandy-soaked Kasseri cheese set on fire just before it's served. I think we'd all return to this west Omaha spot for the less expected culinary treats.

The gyro, though, is why we were here. And when it came time to vote, our top two spots — El Basha and Legacy — each had a real chance at the win.

"I am so on the fence," Jessica said. "To me, the top two completely executed the dish, and that's why it's so hard to decide."

Her vote, though, went to El Basha. "It was so expertly sliced," she said.

"It was flawless." Paul, too, went with El Basha. "It was traditional," he said, "and perfect." Bryce felt the same as the Urbans, but voted the opposite. So did I. "There really is no gray area," Bryce said. "It's either all right or all wrong, and it's just as easy to get it wrong."

The sumac, the fresh herbs and the brightness of the dish's flavor at Legacy sold him.

"Everything in there, it was there for a reason," Bryce said.

I agreed. For me, Legacy was the biggest surprise — and the place I want most to return to.

The arguments must have been exceptionally passionate, because all of a sudden, Paul spoke up.

"I'm changing my vote," he said. "To Legacy. It is a place I would absolutely make the drive to go back to," he said. "More people need to know about it."

After our visits, I called Soyulmaz. He's been in Omaha for 21 years, running Legacy for six and a half of those. The native of Ankara, Turkey, said he first saw sumac on gyros in Adana, Turkey.

"It's a great taste," he said. "I have, every day, one or two people ask me about it. I love that people like it."

He invited me back to the restaurant to try the rest of his menu — I told him he can count on it.

If there's one thing our team learned, it's this: Omaha makes a great burger. It makes a great Reuben. But to find its best, best gyro takes a deeper dive. There's room across the city to step up the gyro game.

El Basha is excellent. But Legacy sits, deliciously, at the top.

"(Legacy Gyros) is a place I would absolutely make the drive to go back to. More people need to know about it."

The Food Prowl's favorite gyro, pictured above, is served with expertly cut and seared meat, a warm pita, fresh herbs and one surprise ingredient that set it apart from all the others.

Legacy Gyros' use of sumac, the purple spice with a tangy flavor shown at top, sealed Legacy's superlative ranking for the Food Prowl judges. Volkan Soyulmaz, above, owns the west Omaha restaurant.