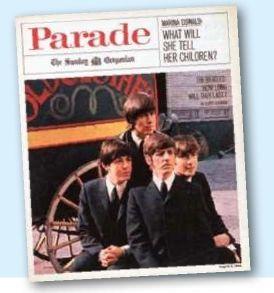 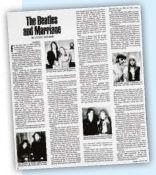 Parade has covered the Beatles from their earliest days in the U.S. to their milestone moments. Take a look back.

The Beatles, How Long Will They Last?

Our Aug. 2, 1964, article examines Beatlemania six months after the Fab Four's U.S. debut on The Ed Sullivan Show, noting, "In the hectic, colorful history of show business there has been nothing or no one to rival their fantastic success." Got that right, but the author, Lloyd Shearer, seemingly not a fan, went on to ask, "How long can the Beatles maintain their unprecedented popularity?" He also quoted a psychiatrist as saying, "In appearance the Beatles present an impression of sexual ambiguity." Hah!

The most popular Beatles tracks on Apple Music's streaming service since the Dec. 24 debut of the band's catalog:

The Beatles and Marriage

In April of 1969 Parade explored the Beatles' romantic relationships (they were all married at the time) and the impact those marriages might have on the future of the band. The article concluded, "To date, marriage has not adversely affected their popularity," but we had a good laugh at author Shearer's opinion of John Lennon and Yoko Ono's wedding. "The way-out pair provided irrefutable evidence that man is indeed descended from apes and simple primordial protoplasmic cells," he editorialized.

It Was 50 Years Ago Today

In a Feb. 9, 2014, piece we celebrated the golden anniversary of the band's appearance on The Ed Sullivan Show with a behind-the-scenes look at the days leading up to the television event, and quotes from band members, including a few of Ringo Starr's funniest exchanges with reporters. When asked how the band proved that they weren't wearing wigs, the drummer replied, "We took them off." — Alison Abbey

Parade.com/beatlesflashback for a closer look at our Beatles stories and some fab books.