Tyler Fox The senior right-hander from Thornton, Colorado, improved to 10-2 this season and 30-9 overall at UNO. 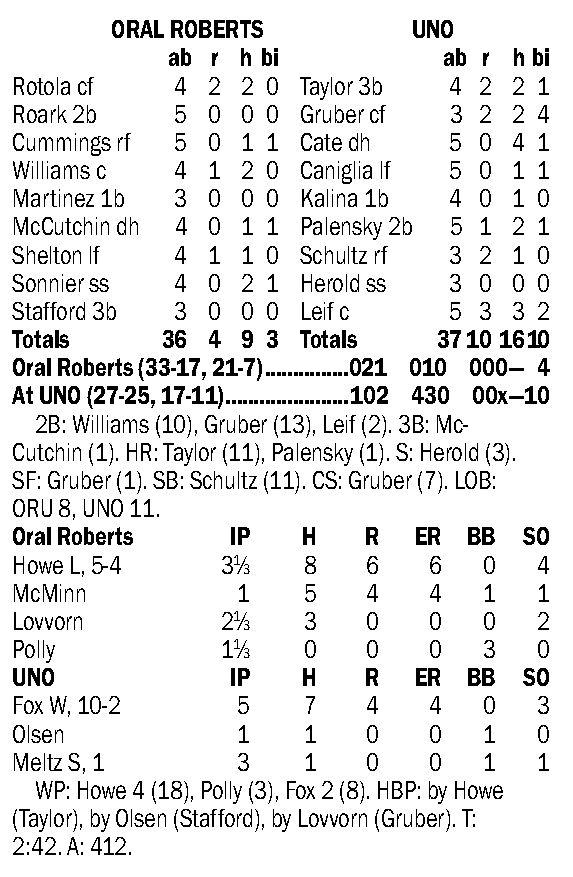 Still, he was good enough to become the best ever at UNO.

Fox topped the school record for career victories by picking up his 30th in a 10-4 bashing of Summit League regular-season champ Oral Roberts at Boys Town. It was UNO's first win over the Golden Eagles.

The senior right-hander from Thornton, Colorado, UNO's Friday starter for four years, contributed five solid innings while improving to 10-2 this season. He allowed four runs, left with a six-run lead after 83 pitches, then let the new record set in.

"It means that I did all I can, and my teammates did all they could for me," Fox said. "The way it all worked together worked out in my favor, worked out in our team's favor.

"All those wins are team wins. I don't own any single one of them. I'm just extremely grateful for all of it."

Fox is now 30-9 all-time for the Mavs heading into the postseason after receiving a helping hand from classmates Clayton Taylor, Cole Gruber and Collin Leif. Taylor led off the UNO first with a homer, Gruber drove in four runs and Leif had three hits and scored three times.

Leif called it a "big-time" win.

UNO broke open a 3-3 game with a four-run fourth that featured run-scoring doubles from Leif and Gruber. The two seniors also drove in runs during a three-run fifth that gave Fox a rare chance for an early exit.

UNO coach Bob Herold said that was important for his senior ace with the postseason looming.

"He's thrown more than 100 pitches two weeks in a row," Herold said. "We wanted to back him off a little bit. The conference tournament is next Wednesday, and he'll throw the opener."

Fox said he'd put little thought into Thursday being his final start at Boys Town. He said his focus heading into the game was the same as it's been for every other outing.

"You may not have your best stuff, but my teammates were there to pick me up tremendously today," he said. "I'm going to miss Boys Town, honestly. It'll be nice to see the guys get a field a little bit closer to home. But I'll still miss it. I played all my games here."

"We knew we let one go last Friday for him," Leif said. "In my mind, and I'm sure for a lot of the other guys, (we) really wanted this one. We just picked him up for the ones we let go in the past."

Fox, who signed late with the Mavs, delivered more than they ever could have expected, Herold said.

"He's as good a kid as we've ever had here and as good of a pitcher," he said. "This guy's been a rotation guy for us since conference season started his freshman year. And not all of them were great outings. But he knows how to win when he doesn't have his best stuff. ... Thirty wins later, it speaks for itself."

Great week to hit the course

Ben Peters takes advantage of the mild weather to practice his disc golf putting at Elmwood Park. Today should be another good day for anythin…

OMAHA-BASED CHAMPS ARE IN A LEAGUE OF THEIR OWN

Tyler Fox The senior right-hander from Thornton, Colorado, improved to 10-2 this season and 30-9 overall at UNO.